Intrauterine Devices (IUDs): Access for Women in the U.S.

Intrauterine devices (IUDs) are one of the most effective forms of reversible contraception. IUDs, along with implants, are known as long-acting reversible contraception (LARCs) because they can be used to prevent pregnancy for several years. IUDs have been used in the U.S. for decades, but a safety controversy in the 1970s prompted the removal of all but one IUD from the U.S. market by 1986. The first new generation IUD was introduced to the U.S. market in 1988, following revised Food and Drug Administration (FDA) safety and manufacturing requirements. Recent controversies have focused on the mechanism of action of IUDs, the high upfront costs for the device, and variability in insurance coverage and access. This fact sheet reviews the various IUDs approved by the FDA, awareness, use, and availability of IUDs, and key issues in insurance coverage and financing of IUDs in the U.S.

What is an IUD?

IUDs are small devices placed into the uterus through the cervix by a trained medical provider to prevent pregnancy. A follow up visit is recommended post-insertion to confirm placement, and a visit to the provider is required for removal. IUDs are effective for three to 10 years, depending on the type of IUD. There are two major categories of IUDs – copper and hormonal – and within those categories, there are currently five IUDs approved by the FDA (Table 1). IUDs work by affecting the ovum and sperm to prevent fertilization and are more than 99% effective at preventing pregnancy. They do not protect against HIV and other sexually transmitted infections (STIs). IUDs do not affect an established pregnancy and do not act as an abortifacient.

The copper IUD is a hormone-free T-shaped device wrapped in copper wire and is effective for up to 10 years.

Four hormonal IUDs are available on the US market. They are also known as LNG-IUDs because they contain the progestin hormone levonorgestrel, which is released in small amounts each day. Today, most women who use IUDs use one of the hormonal products. Hormonal IUDs are not effective as emergency contraception.

Use, Awareness, and Availability of IUDs

Use of IUDs in the U.S. has been increasing substantially since the early 2000s but is still lower than other methods. Attitudes regarding safety of IUDs have been shifting interest has grown, especially among younger providers and younger women who have less knowledge of the IUD controversies of the past. 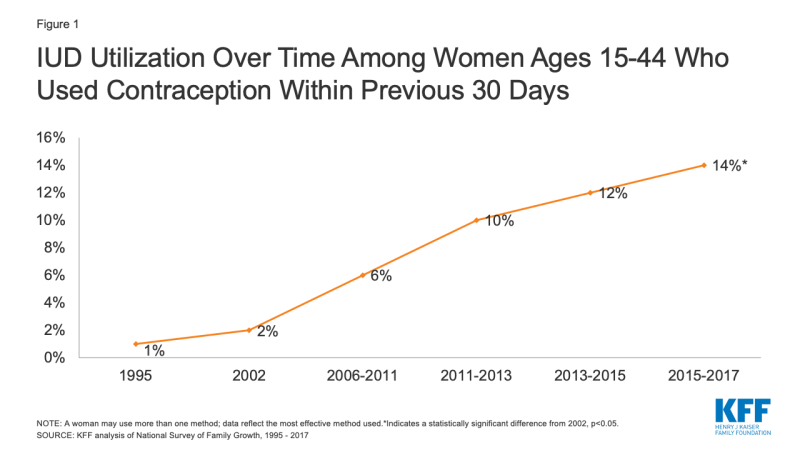 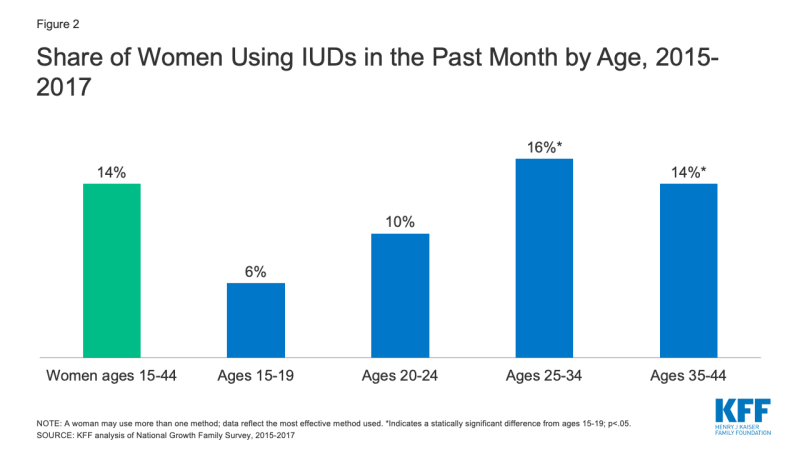 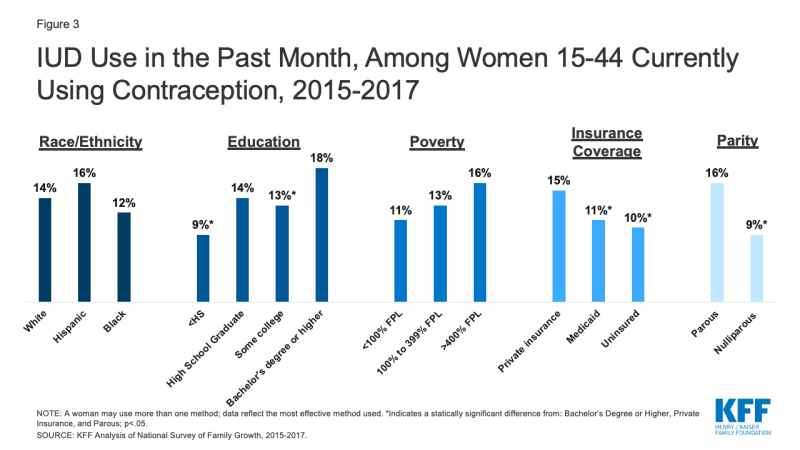 Insurance Coverage and Financing of IUDs

The costs of IUDs have been a barrier to its use, for both patients and providers. Prices for an IUD typically range between $500 and $1,300, in addition to provider visits for insertion, removal and confirmation that the device was properly placed. While many insurance plans have covered IUDs for years, prior to the passage of the Affordable Care Act (ACA), women were likely to have out-of-pocket charges for the product as well as the associated visits. The ACA has eliminated these costs for many women.

IUDs are one of the most effective forms of reversible contraception and interest in continues to grow.   While use of IUDs is still relatively low compared to some other methods, the ACA’s requirement for coverage of contraceptive services and supplies without cost-sharing removes cost barriers for millions of women with private coverage. The elimination of the cost related barriers along with greater awareness and acceptance of IUDs among clinicians and patients will likely continue to increase the use of one of the most effective methods of contraceptive available in the U.S.