Family planning services at community health centers are supported through a combination of patient revenues, health insurance, and grant funding, including the federal community health center program, as well as other federal, state, and local public health grants. Medicaid represents the most important source of health coverage among patients served by publicly supported clinics; in 2016, Medicaid insured two in five (42 percent) low-income women.3

This report, an update of an earlier study conducted in 2011,4 presents the key findings of a national survey of community health centers and their role in the provision of family planning and related services to low-income women, men, and teens.

As was done in 2011, researchers surveyed all federally funded community health centers operating in the 50 states and the District of Columbia based upon data drawn from the federal 2015 Uniform Data System (UDS), a national reporting system that includes community health centers. The survey was conducted between mid-May and the end of July 2017. To ensure representativeness in terms of size and location, the results were weighted by US Census region and health center size. As with the 2011 survey, respondents were asked certain questions about the availability of family planning services across all sites, but the focus of the questionnaire was the practices and policies of their largest comprehensive medical site at which family planning services are available.

The study included statistical analyses to determine what effects, if any, might be associated with the following factors: participation in the Title X family planning program; health centers’ location in an ACA Medicaid expansion or non-expansion state; health center size;12 and geographic location.13 In the case of questions asked in both 2011 and 2017, we present current survey results along with those from our earlier study. All results described in this brief are statistically significant (at p < 0.05), unless otherwise noted. 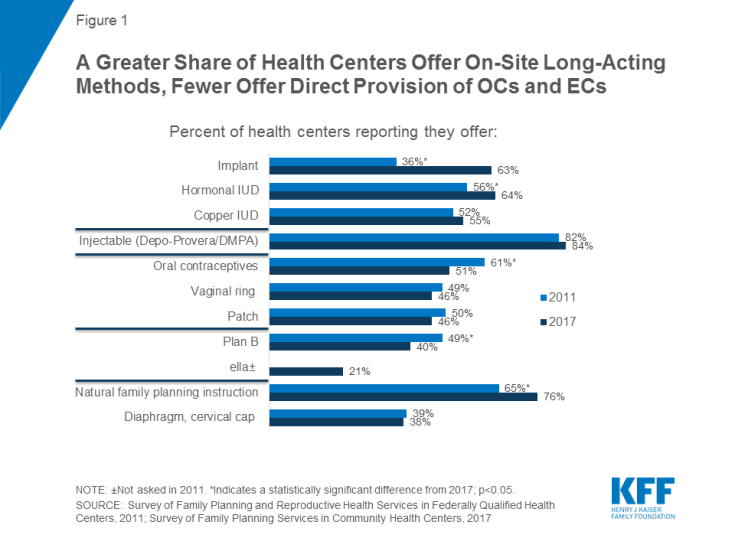 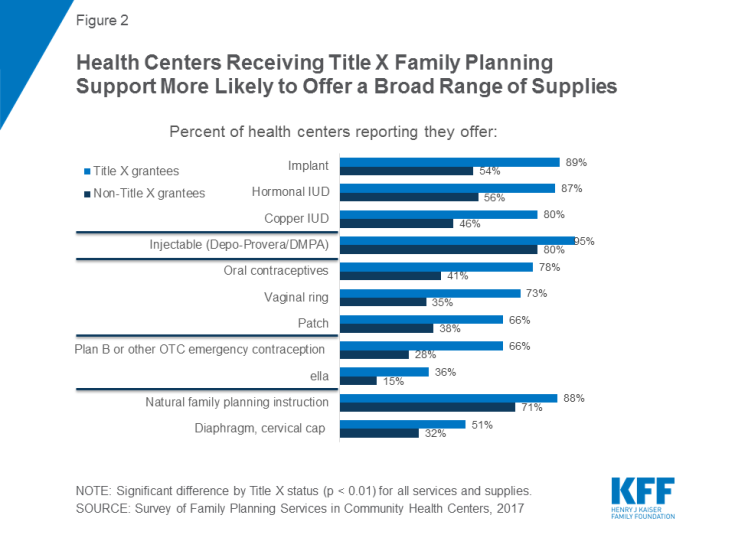 Onsite provision of hormonal IUDs rose significantly among Title X sites, a 13 percentage point gain from 2011 to 2017. While onsite provision of the long-acting contraceptive implant increased significantly across both types of sites, the largest difference can be seen in Title X clinics; 89 percent of health centers with Title X funding now offer implant services onsite compared to 51 percent in 2011 (Table 1). In non-Title X sites, the percentage rose from a far lower 31 percent in 2011 to 54 percent in 2017.

Fewer than half of the largest health center sites provide emergency contraception onsite, and many do not prescribe or refer for it at all. Onsite provision of Plan B16 has significantly decreased since 2011. Only two in five sites provide onsite access to levonorgestrel, an over-the-counter (OTC) EC pill, the most well-known brand name of which is Plan B, down from roughly half (49 percent) of all health centers in 2011. One in five (21 percent) health centers currently provides onsite access to ulipristal acetate, the prescription EC (brand name: ella). Emergency contraception (EC) is an important component of contraceptive care, and reducing access barriers is essential in preventing unintended pregnancy. Depending on the type of EC (levonorgestrel or ulipristal acetate), a woman must take it within either 72 hours or 120 hours of unprotected sex or contraceptive failure. Quality family planning guidelines recommend that providers dispense EC onsite by providing or prescribing EC in advance for a woman to take home or to obtain without returning to the clinic.

Onsite access to emergency contraception is greater at sites receiving Title X funding, although for both types of sites, access to prescribed emergency contraceptives at health centers is low. About two-thirds (66 percent) of Title X sites offered Plan B or other over the counter EC onsite, compared with less than one-third of non-Title X sites (28 percent). Onsite provision of Plan B has decreased significantly among both Title X and non-Title X sites since 2011 when 83 percent and 35 percent of health centers provided this service, respectively. Title X sites (36 percent) were also more likely to provide ella onsite than non-Title X sites (15 percent). Notably, 15 percent and 28 percent of all sites do not dispense, prescribe, or refer for plan B or ella, respectively.17 Less than one-third of the largest sites (31 percent) provide or prescribe EC ahead of time; however, Title X sites do so at twice the rate of non-title X sites (52 percent vs 23 percent, respectively) (Figure 3).18 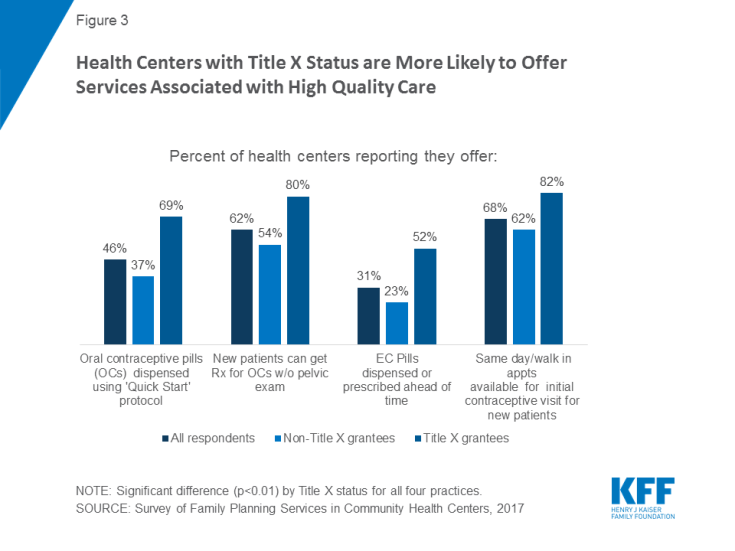 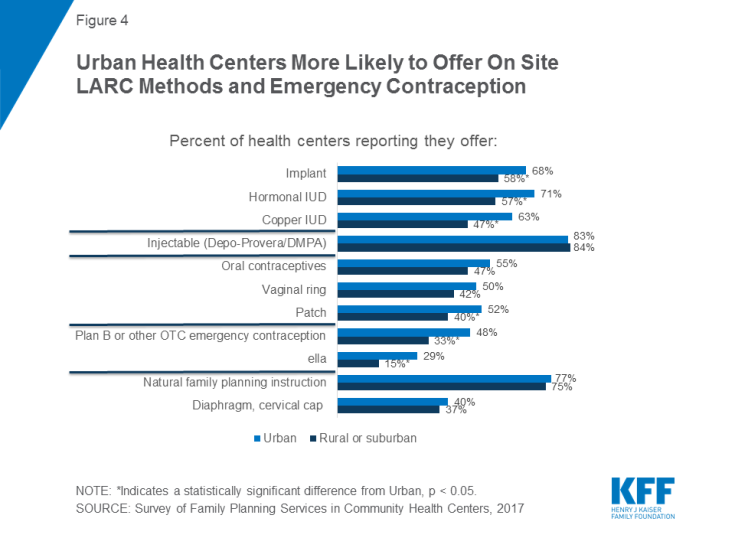 In addition, under older standards of practice, clinicians typically prescribed or provided birth control pills only one month to three months at a time; today’s clinical recommendations now suggest providing at least three months or up to one year of oral contraceptives during a single visit to minimize the likelihood that patients will experience gaps, which increase the risk of unintended pregnancy.20 Only 30 percent of health centers that provide OCs onsite reported allowing patients to obtain a full year’s supply of OCs at a single visit, with no significant difference by Title X status. More rural/suburban health centers that provide OCs onsite allow patients to pick up one year of oral contraceptive pills at a time than urban health centers (38 percent versus 23 percent). 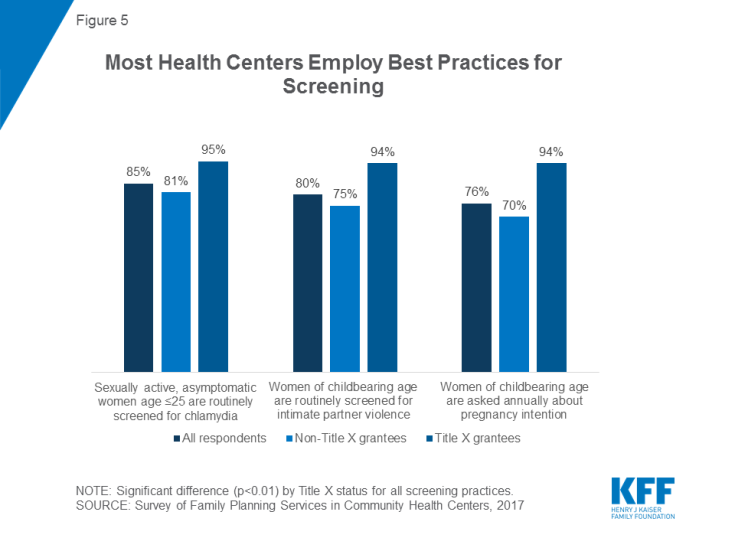 Services tailored to adolescents are a feature at six in ten health centers, as is adherence to standards designed to ensure confidentiality of care furnished to adolescents. Adolescents represent an especially vulnerable population but can be protected by measures such as maintaining confidentiality through separate contact information for communications regarding family planning services. Over 60 percent of sites offer contraceptive services tailored specifically for adolescents, collaborate with other entities on outreach activities to adolescents to meet their family planning needs, and/or maintain separate contact information for communications regarding family planning services for adolescents. A higher share of sites offer services tailored to adolescents (63 percent in 2017 compared to 47 percent in 2011), and collaborate with other entities and maintain specialized confidentiality procedures for minors than in 2011 (Table 2). About one quarter of health centers (23 percent) reported that their largest site also provides family planning services at school-based health centers (data not shown). 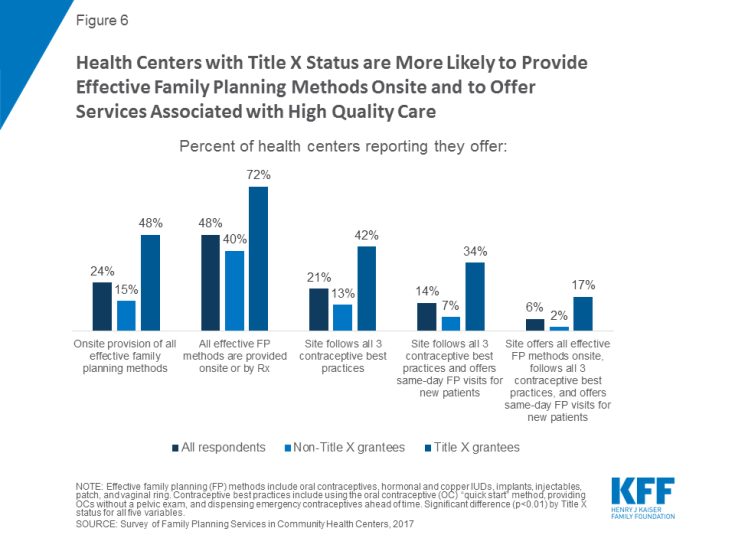 Few health centers report they can absorb a significant number of new patients given current staffing and space constraints. The recent health center expansion resulting from the ACA has occurred simultaneously with a marked decline in the number of freestanding family planning clinics.25 The majority of survey respondents (51 percent) said that – at most – they would be able to increase their new patient capacity between 10 and 24 percent (Figure 7). Only 6 percent reported that they could absorb a 50 percent or greater patient increase. These figures are consistent with findings from a study conducted in Texas following the reduction in access to publicly supported family planning services26 that shows the challenges in growing capacity at remaining providers quickly or substantially enough to overcome the loss of independent family planning clinics. 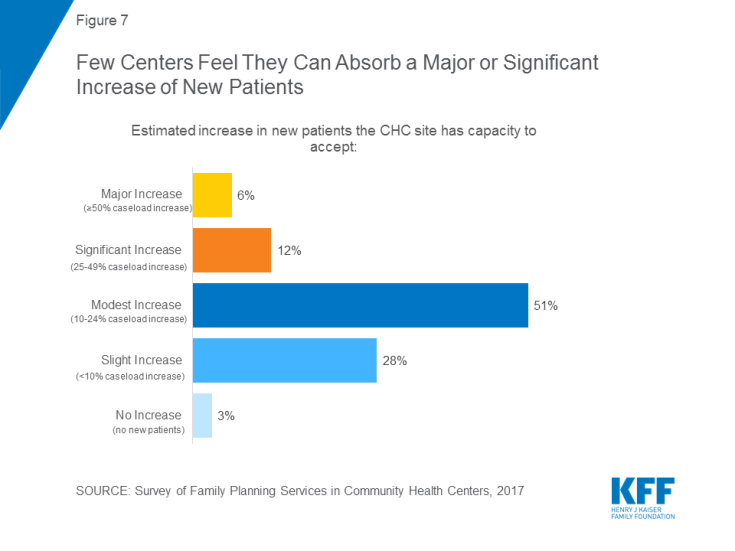 Figure 7: Few Centers Feel They Can Absorb a Major or Significant Increase of New Patients

In 2017, 24 percent of all health centers reported that referral was not an option because there was no family planning clinic in their community, a similar proportion to 2011. The lack of referral options in 2017 was far more common in rural and suburban health centers (40 percent) compared to urban health centers, only 7 percent of which reported no referral clinics. Referrals are more commonly reported by sites that do not get Title X funding (43 percent versus 13 percent among those that receive Title X funding).

Referrals may be falling for several reasons. One is the growth in health centers and expanded capacity to furnish services onsite, particularly more complex procedures such as those involved in LARC methods. Another factor may be the reduction in the number of freestanding family planning clinics locally.27 Other reasons may be changes in care-seeking preferences of family planning patients (a desire to obtain all needed services in one place) and changes in overall standards of primary care practice, with a greater emphasis on the role of community health centers as comprehensive health homes.

When asked to describe how their family planning services have changed in the past five years, health centers identify several factors, including reimbursement, staffing, and patient volume. Patient demand for family planning services rose for 49 percent of health centers; this was notable for both Title X grantees (64 percent) and, to a significantly lesser extent, for non-Title X sites (42 percent). In parallel, far more health centers reported family planning staffing increases (57 percent) than decreases (8 percent) (Figure 8). Access to training for staff in IUD and implant procedures rose. This was significantly different for Title X sites, where 62 percent reported an increase in access to training for staff, compared to 39 percent of sites that do not receive Title X funds. Nearly half (45 percent) of all health center sites report a decline in the number of uninsured patients, consistent with the reduction in the number of uninsured resulting from the ACA coverage expansions. A sizable minority of sites (40 percent) reported experiencing increases in the costs of stocking family planning supplies, and this was significantly higher among those that participated in Title X (51 percent) than those that did not (37 percent), likely because a higher share of Title X sites offered more costly methods like IUDs onsite. 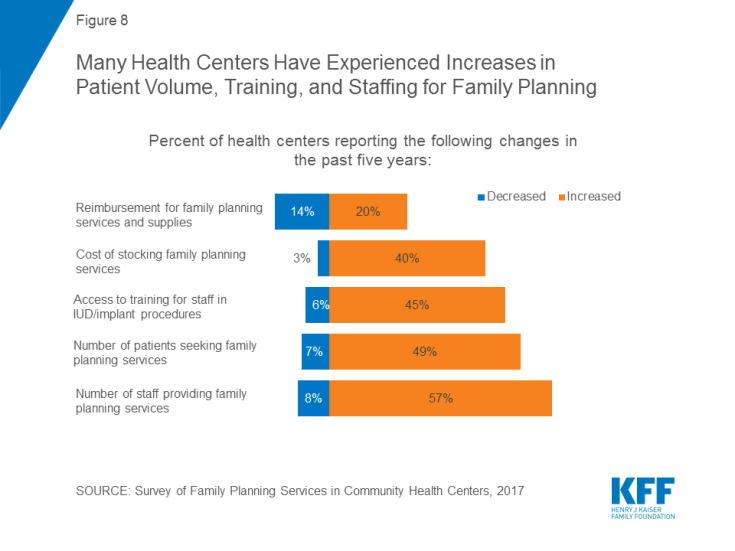 Figure 8: Many Health Centers Have Experienced Increases in Patient Volume, Training, and Staffing for Family Planning

Title X-funded sites are significantly less likely than those that do not receive Title X funding to report certain barriers. Title X sites are less likely to report a lack of insurance coverage among patients, high out-of-pocket costs for patients, a lack of staff trained in IUD/implant procedures, the high cost of keeping contraceptives in stock, or inadequate insurance payments as major barriers to meeting the family planning and reproductive health needs of their patients. The latter four findings hold true even after controlling for location in a Medicaid expansion state, size, and urban vs. rural/suburban location (see Table B in Appendix). In addition, rural/suburban health centers are more likely to report a lack of staff trained in IUD/implant procedures (27 percent) as a major barrier, more than double the share of urban health centers that do (10 percent). Small health centers28 are also more likely to report this barrier, compared to large health centers (24 percent versus 14 percent). However, large health centers (23 percent) are more likely than small health centers (15 percent) to report that inadequate reimbursement is a major barrier to meeting the needs of their community.