Almost all women use contraception at some point in their life and approximately two-thirds of women of reproductive age currently use contraception.1 Most, but not all, sources of public and private health insurance coverage now pay for contraceptive services and supplies, but the extent of coverage differs by payer. This fact sheet reviews how coverage of contraceptives varies between private insurance and publicly funded programs including Medicaid, Medicare, TRICARE, the Indian Health Service, and Title X funded clinics.

Private insurance plans include employer-sponsored insurance (ESI) plans in the large and small group markets, plans purchased directly from an insurance company by an individual, and plans purchased through state and federal Marketplaces. A majority (65%) of women ages 15-49 are insured through private plans either as the primary beneficiary or as a spouse or dependent.2 The Affordable Care Act (ACA) creates the first federal contraceptive coverage requirement for private plans.  While they apply to most private plans, they do not apply to all insurers.3 A recent HHS study estimates that 55 million women have private insurance coverage that includes no-cost coverage for contraceptive services and supplies.4

Medicaid is a state-federal program that provides health coverage to individuals with low incomes. The ACA enables states to expand Medicaid eligibility levels to encompass a broader population than has historically been eligible, but only half of states (29 + DC) have expanded their program. Among the 19.4 million women ages 15 and older with full Medicaid benefits in 2011, those in their reproductive years (ages 15 to 49) accounted for 70% of enrollment nationwide (Figure 1).8 All Medicaid programs are required to cover family planning services and supplies without cost-sharing. Medicaid beneficiaries are able to seek family planning services from any provider that accepts Medicaid, regardless if the provider is included in the beneficiary’s network.9 This is particularly important for women enrolled in Medicaid managed care plans or for women who are concerned about confidentiality. Because there is no federally defined standard for family planning, the range of contraceptive products and services that are covered can vary by state and differ depending on how an individual qualifies for Medicaid. 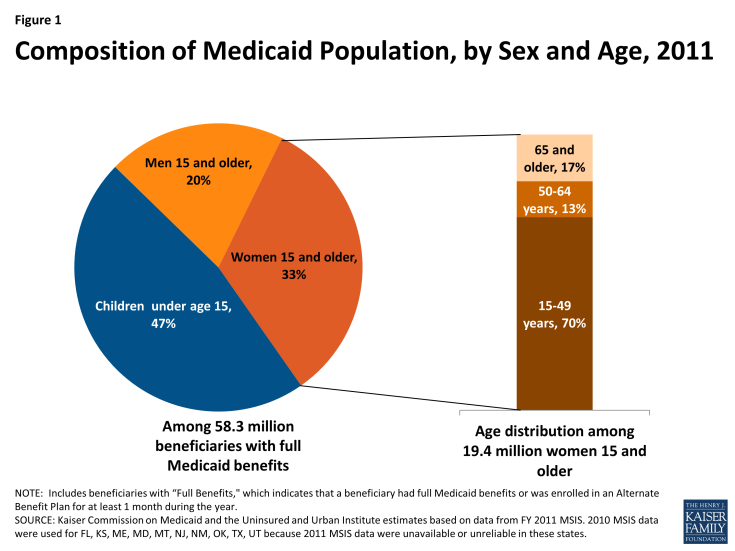 Medicare is the federal program that provides health insurance to people ages 65 and older, as well as to younger people with permanent disabilities and end-stage renal disease (ESRD). Although the majority of Medicare beneficiaries are ages 65 and older, almost 920,000 women ages 18 to 44 received insurance coverage through Medicare in 2011 (Figure 2). Contraception is an often over-looked aspect of care for women with chronic conditions and disabilities16 and there is no federal requirement for Medicare to cover contraceptive services and supplies for women of reproductive age enrolled in Medicare.17 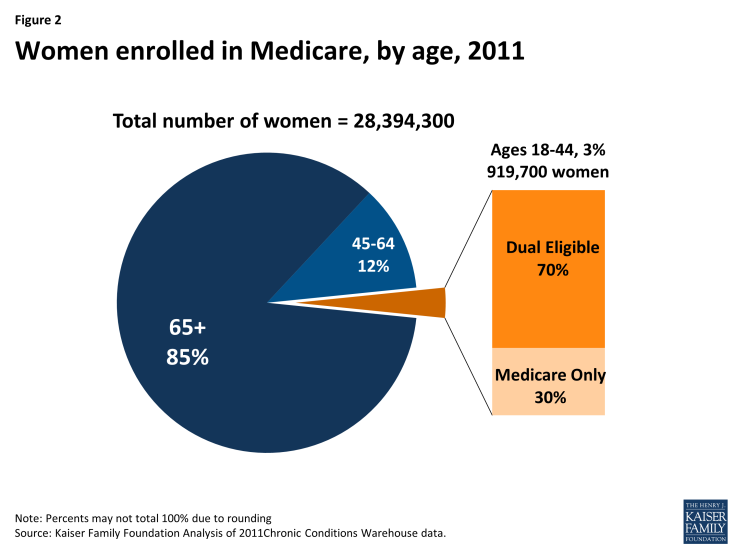 TRICARE provides health insurance coverage for more than 200,000 women in the military, as well as 1.1 million female spouses and dependents of active duty military personnel who are of childbearing age. More than 95% of women serving in the military are of reproductive age.21 Coverage decisions are made by the Department of Defense; the ACA contraceptive coverage requirements are not applicable to TRICARE.22

The IHS is the health care system for federally recognized American Indian and Alaska Natives in the United States.26 Services are provided to more than 2.2 million27 American Indians and Alaska Natives without cost sharing through facilities and clinics operated by IHS on or near Indian reservations.28 Federal regulations require IHS to cover health promotion and disease prevention services, which include family planning and treatment of STIs; however availability of these services can vary by clinic.

Title X is a federal block grant provided to family planning clinics by the US Department of Health and Human Services’ Office of Population Affairs. More than 4,400 clinics receiving Title X National Family Planning Program funding serve approximately 5 million clients each year, 92% of whom are female.32 Low-income women are able to seek contraceptive services from Title X funded clinics at reduced or no- cost. 33

Private and public coverage of contraceptive services and supplies varies greatly.  While most women with private insurance now have comprehensive coverage without cost-sharing, women insured through public programs or who are uninsured lack the same guarantee.  The patchwork of policies used by public insurance programs can leave some women vulnerable to gaps in contraceptive coverage or shouldering significant costs for birth control. Although legislative efforts at the federal and state levels have closed some of these gaps, affordable access to the full range of available comprehensive options is still not within the reach of all women in the U.S.