As many previously uninsured Californians gained coverage, 42 percent remained uninsured. Many of the remaining uninsured have tenuous links to health insurance posing challenges for future enrollment efforts. Forty-five percent of the remaining uninsured reported in the baseline survey that they had been without health insurance for two or more years (Figure 25) and an additional 37 percent said they have never had insurance. Hispanics make up 62 percent of the remaining uninsured and nearly half of them (29 percent) are undocumented Hispanics who are not eligible for Medi-Cal or assistance through Covered California. About 4 in 10 (39 percent) report family income that put them in the group likely eligible for Medi-Cal and another quarter (24 percent) are likely eligible for financial assistance through Covered California.1 These shares reflect the demographics of people who were uninsured prior to the first ACA open enrollment period and did not get coverage during the open enrollment period. Others may have been covered prior to open enrollment but now uninsured – a group not captured by this survey. 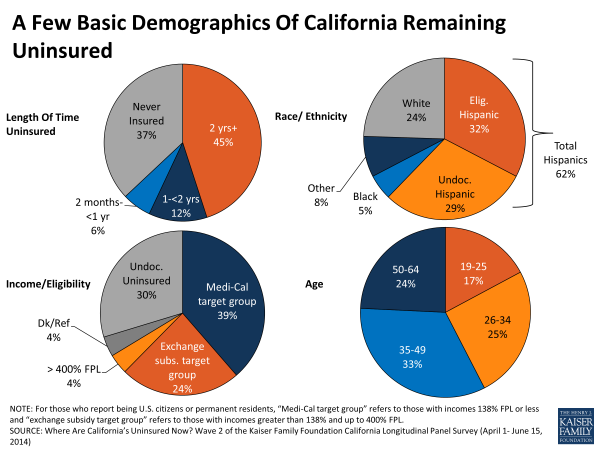 Why Did They Remain Uninsured?

Why did 42 percent of California’s uninsured prior to open enrollment remain without coverage? Most of the remaining uninsured seem to value insurance, with majorities saying it is something they need (71 percent) and that it is worth the costs (59 percent) (Figure 26). Still roughly 3 in 10 of the remaining uninsured say they can get by without insurance (28 percent) or don’t feel coverage is worth the price (33 percent), including 4 in 10 (40 percent) of those who are likely eligible for coverage through Covered California or Medi-Cal due to their self-reported income level and immigration status. 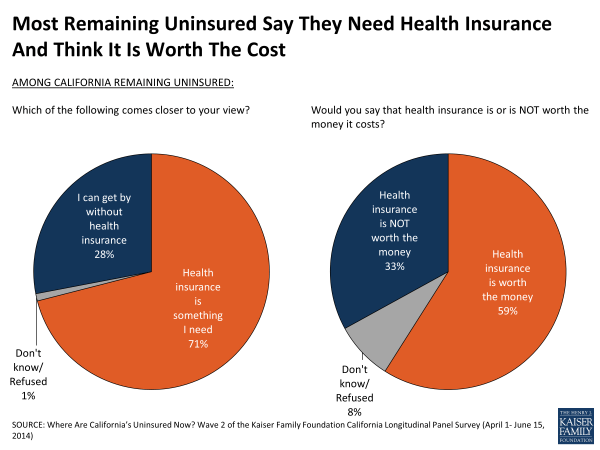 The cost of insurance (whether perceived or actual) remains a barrier. When asked in their own words why they didn’t get coverage, one-third (34 percent) point to costs as the reason. Fifteen percent say they don’t qualify or don’t think they do, including 9 percent who say they can’t enroll or are worried about signing up because of their immigration status. Other reasons the remaining uninsured give for not signing up for coverage include not having yet tried or being too busy (9 percent), not having enough information about enrolling (9 percent), having tried but not being successful (8 percent), and not wanting or needing coverage (7 percent) (Figure 27). A few (6 percent) say they didn’t get insurance because of issues associated with the application process, including three percent who say they are still awaiting contact or approval – a finding that is perhaps related to the large backlog of about 900,000 Medi-Cal applicants waiting for counties across the state to process their applications.2 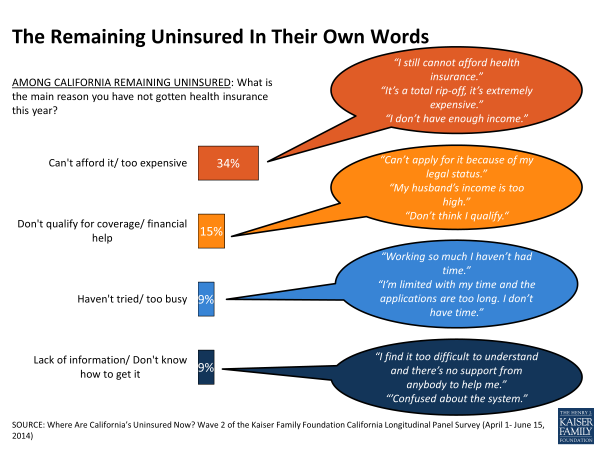 Do They Think They Will Get It Later?

Although they missed the ACA’s first open enrollment period, almost 6 in 10 (57 percent) of the remaining uninsured think they will enroll in a plan later this year, while 3 in 10 (31 percent) think they will continue to go without health insurance (Figure 28). More than 7 in 10 (73 percent) of the remaining uninsured who are likely eligible for Medi-Cal say they plan to enroll later this year, compared to about half of those in the exchange target group (51 percent). Of those who see coverage in their future, 57 percent are uncertain where they will get insurance, and small shares say they expect to get it from Medi-Cal (15 percent), an employer (13 percent), or through Covered California (11 percent). 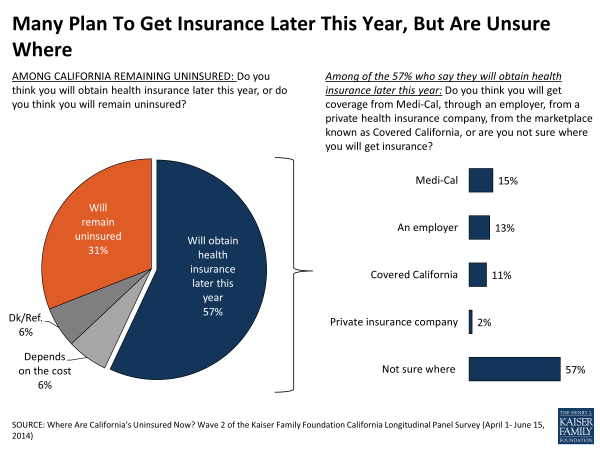 Did They Try To Get Coverage? Why Didn’t They Get It? 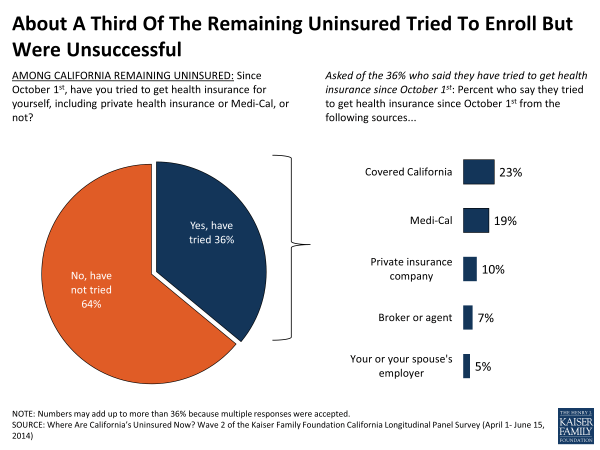 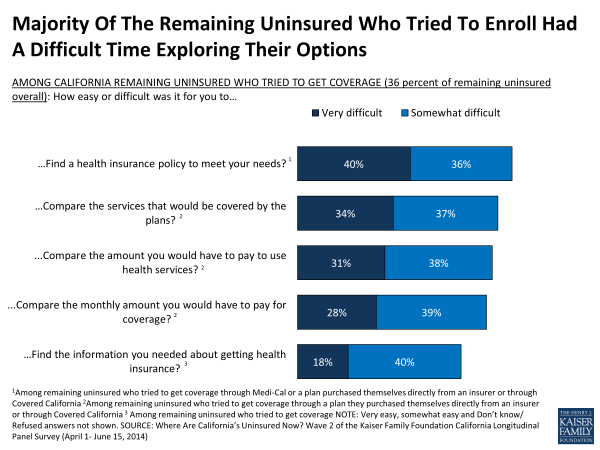 Are The Remaining Uninsured Aware Of Coverage Options?

Eight in ten (81 percent) of the remaining uninsured are aware of the requirement to buy health insurance under the ACA, and most (65 percent) think the mandate applies to them (Figure 31). The remaining uninsured are divided on whether or not they’ll have to pay a fine this year with 44 percent saying they think they will be penalized and 43 percent saying they won’t. Many, in fact, may be exempt due to financial hardship or other exceptions under the law.

Other provisions are less widely recognized, including the parts of the law that may benefit the remaining uninsured most. For example, 6 in 10 remaining uninsured say they are aware of the Medi-Cal expansion (58 percent), and a similar share say they are aware the law provides financial assistance to help low and moderate income Americans (60 percent), leaving roughly 4 in 10 unaware of these aspects of the law that may open doors for them to access coverage (Figure 31). 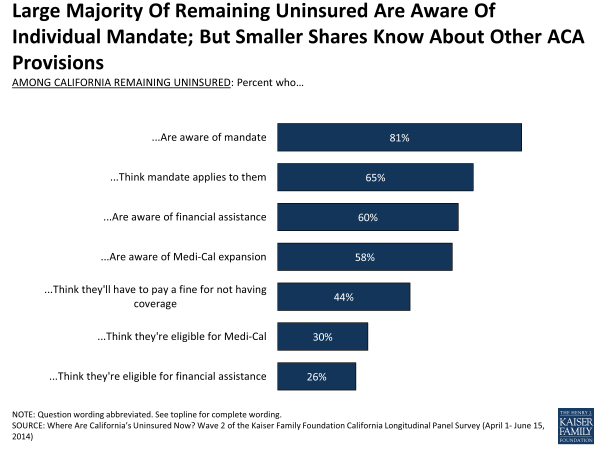 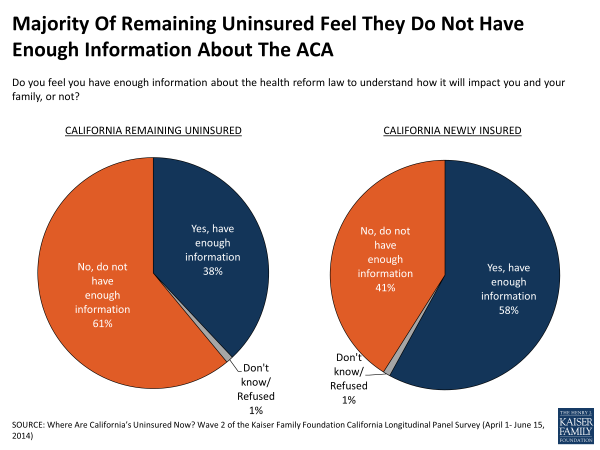 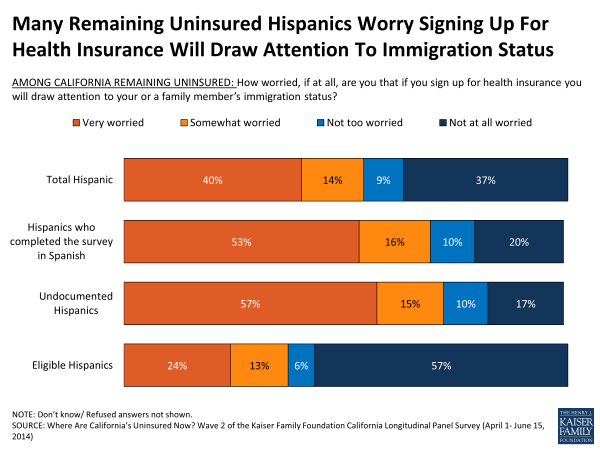 In addition to immigration concerns, language may also present a barrier for some Hispanics who remain uninsured. Fully 70 percent of remaining uninsured Hispanics took the survey in Spanish (34 percent of Hispanics overall) and they are divided as to the amount of information about signing up for health insurance that is available in Spanish. About half (52 percent) say that, in their experience, there is at least some information in Spanish available (Figure 35) and about 4 in 10 say there is only a little or no information in Spanish. Personal assistance in Spanish may be more visible – about 6 in 10 (58 percent) remaining uninsured Hispanics who took the survey in Spanish say they are aware of people in their community trained to help them sign up for coverage in Spanish.

In spite of these potential barriers there is widespread overall support for the role of health insurance among Hispanics who remain uninsured – roughly three quarters (78 percent) say health insurance is something they need and is worth the cost (72 percent), shares that are higher than their white peers (Figure 35).

In California, undocumented immigrants make up about a fifth of those who were uninsured before the ACA expansions kicked in, and under the law, they are not eligible for Medi-Cal or subsidies through the exchange. As a group they are largely aware of these restrictions – 63 percent say they are not eligible for Medi-Cal and 70 percent say they don’t qualify for financial assistance through Covered California. Half say the mandate doesn’t apply to them and most (60 percent) correctly respond that they won’t have to pay a fine for not having coverage.