Section 1: Who Got Covered?

How Many Previously Uninsured Californians Got Covered?

Nearly 6 in 10 (58 percent), or approximately 3.4 million, previously uninsured adult Californians report obtaining health insurance since the start of open enrollment including 10 percent who say they have signed up but are waiting for coverage to start, while the remainder continued to go without health insurance (Figure 1). Fully a quarter of those uninsured prior to open enrollment report signing up for Medi-Cal while smaller shares report getting coverage through an employer (12 percent), a plan through Covered California (9 percent) and other non-group coverage (5 percent).

Under the Affordable Care Act, access to coverage in California was expanded primarily in two ways. Medi-Cal eligibility was broadened to include parents and adults without dependent children earning 138% FPL or less, two groups that had limited access to Medi-Cal coverage prior to the ACA. In addition, the Covered California Marketplace was developed as a place where people could shop and compare health insurance plans and access federal subsidies for health insurance. Outreach efforts and media coverage about the ACA may have encouraged some people who were previously eligible for coverage through Medi-Cal to obtain coverage, sometimes referred to as the “woodwork” effect. It is difficult to distinguish those who may already have been eligible for Medi-Cal from those who are newly eligible due to expanded eligibility under the ACA in this survey, but the combined enrollment of the newly insured in Medi-Cal and in plans through Covered California indicate that about a third (34 percent) of California’s previously uninsured got coverage through these ACA-related coverage options. In contrast, it is more typical for access to job-based insurance to shift frequently as people change jobs or become eligible after a waiting period, so some people may now have coverage through an employer because of normal movement in the insurance market, but others may have been motivated to enroll in an offer of coverage through an employer due to the ACA’s requirement to have insurance. 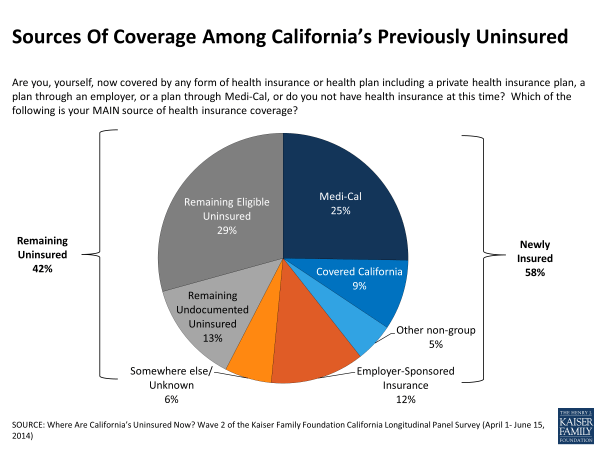 Which Previously Uninsured Californians Got Covered?

Rates of coverage among previously uninsured adult Californians are similar across age groups, income groups, and self-reported health status (Figure 2). For example, 58 percent of previously uninsured younger adults age 19 to 34 report getting insurance, similar to the share of middle-aged adults age 35 to 49 (55 percent) and the same as the share of near-elderly age 50 to 64 (58 percent). Reports of new coverage are also similar for those at different income levels. And, those reporting their health as fair or poor were just as likely to say they got insurance as Californians reporting being in at least good health (53 percent and 60 percent). 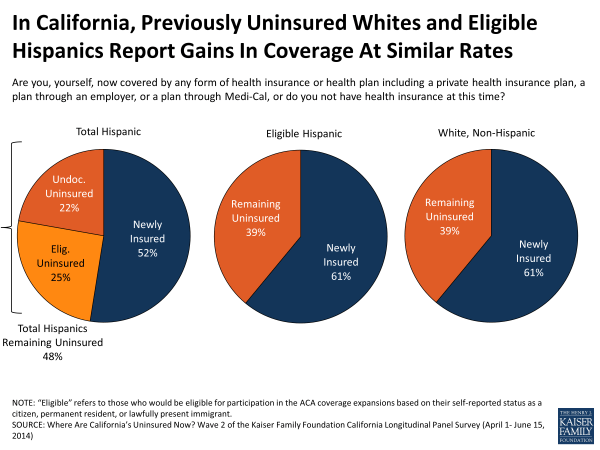 But for other characteristics, rates of coverage vary widely. For example, college graduates are more likely to have gained coverage than those with less education. In addition, those who report having a debilitating chronic disease, disability, or handicap are more likely than those without to say they now have coverage, with almost 8 in 10 reporting they obtained health insurance since last summer (Figure 4).2 Meanwhile, less than half of those who have spent their lifetime without insurance say they obtained coverage, a share that is 20 percentage points lower than those who say they have been insured at some point. Many in this group – 40 percent of those who say they have never had insurance – are undocumented immigrants who are ineligible for coverage through Medi-Cal or Covered California under the ACA. Still, it is notable that about 4 in 10 (43 percent) of previously uninsured Californians who report never having coverage before now report being insured. In addition, men were slightly less likely to report getting insurance than women (52 percent vs. 63 percent). 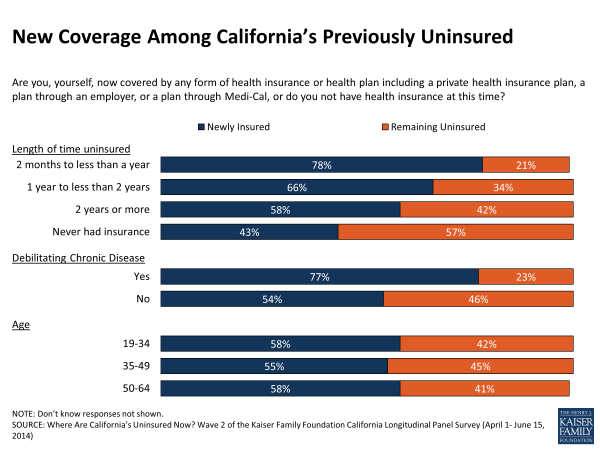 How much California’s uninsured knew about the law and what their view of it was before open enrollment are also factors that may contribute to some obtaining coverage. Those who were aware before open enrollment started of the requirement to obtain insurance, the Medi-Cal expansion, or the subsidies available to help people purchase insurance are somewhat more likely to say they now have insurance than those who were unaware of these key provisions (Figure 5). But, a similar share of those with favorable views of the law last summer report getting coverage as those who had unfavorable views (59 percent vs. 57 percent).

Outreach played a role in getting some people covered – 69 percent of California’s previously uninsured who said they were contacted about signing up for health insurance since October 1st say they obtained coverage, compared to 52 percent of those that say they weren’t contacted. On the other hand, those that say they were encouraged by a family or friend to sign up for coverage are no more likely to report being newly insured than those who didn’t report the same encouragement (58 percent and 55 percent) (Figure 6). 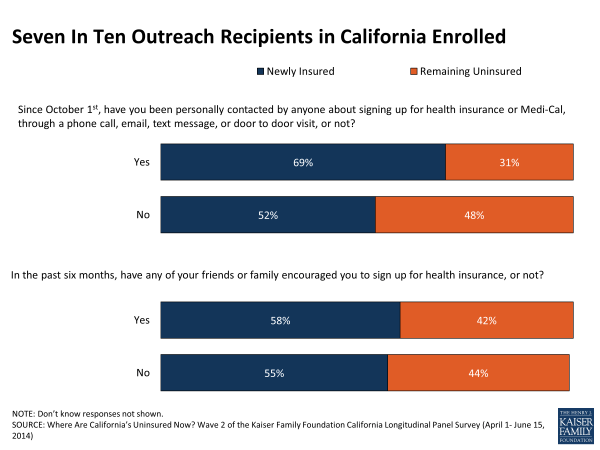 Many of these factors tend to overlap so to attempt to isolate the personal elements that best predict who was more likely to get insurance during this first open enrollment period, we conducted a regression analysis with demographic factors, relevant perceptions of the law, and outreach indicators. This analysis showed Californians who say they obtained insurance are more likely to report being married, having a debilitating chronic condition, having been uninsured for less than two years, and being contacted about getting coverage after controlling for a variety of demographic factors such as age, education, and income. On the other hand, the regression analysis also showed that Californians who reported remaining uninsured are more likely to be male, have never had insurance, or be undocumented immigrants. And, there are no differences by race/ethnicity after controlling for these demographics, particularly after controlling for immigration status and never having had coverage. Knowledge of key provisions or attitudes of the law going into open enrollment did not significantly predict enrollment after controlling for other characteristics.3