What Type Of Coverage Did They Get? 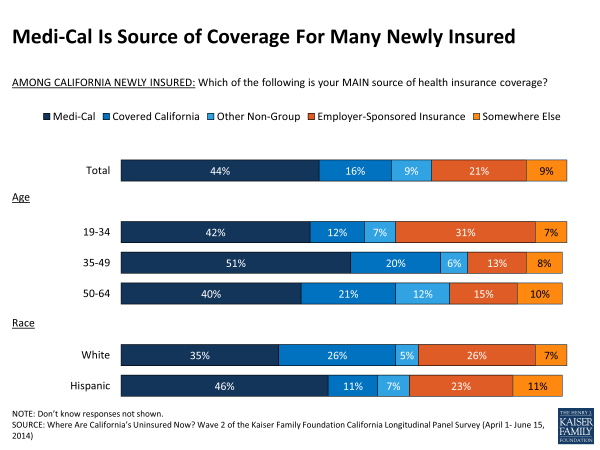 Most newly insured Hispanics say they enrolled in Medi-Cal (46 percent) and they were less likely than whites to say they enrolled through Covered California (11 percent vs. 26 percent) (Figure 7). Young adults primarily report getting coverage through Medi-Cal or an employer (including a parent’s employer).

Accessing coverage through an employer

There are often changes in people’s health insurance status as they switch jobs or increase or decrease working hours. In the baseline panel survey last summer, over half (54 percent) of the previously uninsured who now say they have job-based insurance reported that their or their spouse’s employer offered insurance, but most said they did not participate in the plan because they were still in the waiting period for coverage (30 percent) or the amount they would have to pay is too much (19 percent). In addition, over a quarter (27 percent) of those who now have coverage through an employer report currently working full time after saying they were working part time or were unemployed in summer 2013. Many who now have job-based coverage anticipated enrolling. In the baseline survey, 7 in 10 said they expected to get insurance in 2014, including 3 in 10 who said they thought it would be through an employer. As a result, some newly insured through an employer may have come out of the waiting period since last summer or now work for an employer that offers insurance, while others may have been motivated by the ACA to take-up an employer’s offer of coverage.

Many newly covered by Medi-Cal are not new to the program. Forty-five percent of those newly insured by Medi-Cal said last summer that they have received coverage through the program before and an additional 16 percent say they had tried to enroll at some point. Nearly a quarter (23 percent) of previously uninsured Californians without dependent children say they enrolled in Medi-Cal. This is similar to the share of previously uninsured adults with dependent kids who say they enrolled in Medi-Cal (28 percent) and an indication that some who may not have been eligible for the program before are now covered.

Purchasing a plan through Covered California

And, for those who say they got a plan through Covered California, nearly half (46 percent) said last summer that they had tried to purchase non-group insurance before but most said they didn’t end up buying it because it was too expensive.

Why Did The Previously Uninsured Get Coverage? 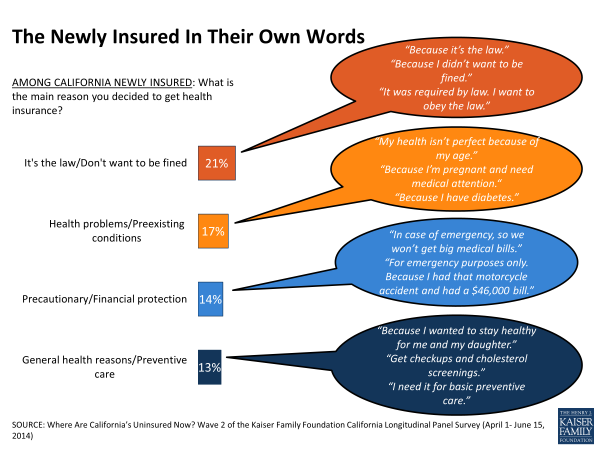 When asked more directly whether they got coverage because of the ACA or if they would have obtained it regardless of the law, 45 percent say they got insurance because of the law. Still, just over half of the newly insured (52 percent) don’t directly attribute their new coverage to the ACA and say it’s something they would have done anyway. The development of the Covered California Health Insurance Marketplace and the changes to the non-group market under the ACA were designed to make coverage more accessible and affordable. The majority (64 percent) of those with coverage through Covered California say the law is the reason they got insurance, while 7 in 10 (72 percent) newly insured with employer-sponsored coverage say they would have gotten it anyway. People with Medi-Cal are split with 48 percent saying they got it because of the law and 50 percent saying they would have enrolled regardless (Figure 10). It is important to note that these are people’s perceptions – some of the newly insured would likely have been ineligible for Medi-Cal or unable to purchase coverage without the ACA expansions. As noted earlier, gauging by the types of coverage the newly insured report enrolling in, 60 percent of the newly insured (34 percent of California’s previously uninsured overall) are now more likely covered as a result of the ACA coverage expansions through Medi-Cal and Covered California. 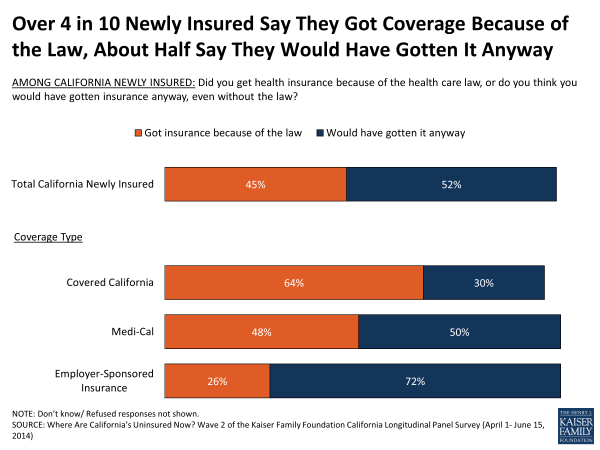 Do They Think Coverage Is Affordable, Making Them Financially Secure?

The uninsured are a group that typically report being under considerable financial strain, and in the baseline survey last summer over half said they felt financially insecure, and the vast majority expressed concern about being able to pay their rent or mortgage or keep up with rising costs. Confronted with tight budgets and little disposable income, affording health insurance still seems to be a stretch for many. Nearly half (46 percent) of those newly insured by coverage other than Medi-Cal say paying for coverage every month is at least somewhat difficult (Figure 11). Those with insurance through Covered California are split in their reports of how difficult it is to pay their monthly premium with 51 percent saying it is at least somewhat difficult and 48 percent saying it is not difficult. Most of those with job-related coverage (whose employers are likely paying for at least some of the cost) say it is not too or not at all difficult for them to pay the monthly cost of coverage. While affording these costs may be challenging, nearly three quarters say their plan is a good value for the amount they pay (Figure 12). 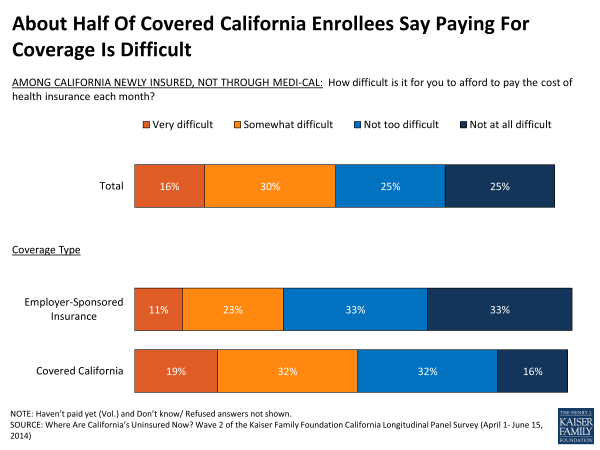 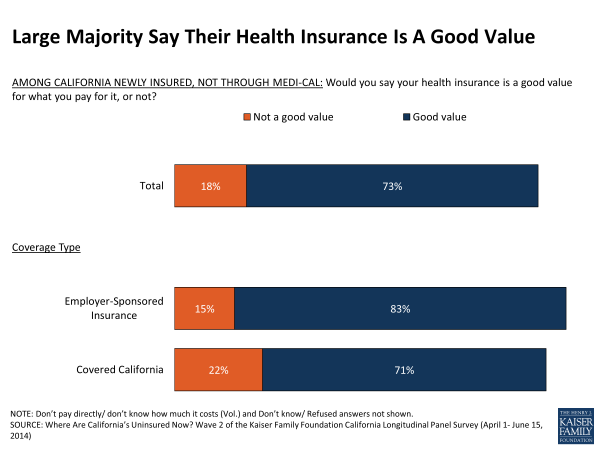 Many newly insured recognize the role health insurance can play in protecting them from costly or unexpected medical expenses. For example, more say that gaining insurance has made them feel more financially secure than less (37 percent vs. 16 percent), though a substantial share (45 percent) say it has made no difference. But 3 in 10 of the newly insured say they still feel vulnerable to high medical bills rather than well-protected (Figure 13). 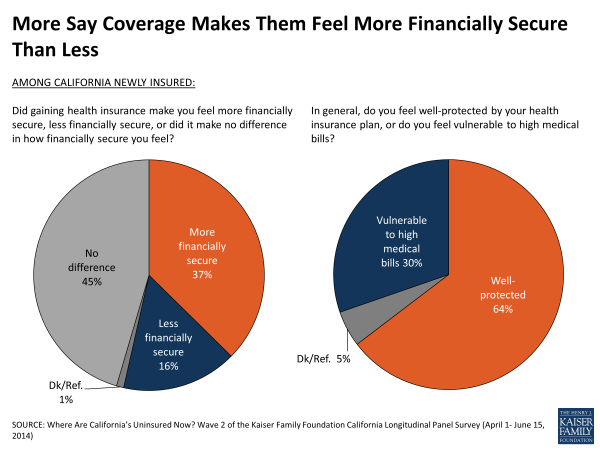 About a quarter of the newly insured say their coverage cost less than they thought it would, while 17 percent say it cost more and the remainder say the cost was about what they expected (43 percent) or aren’t sure (14 percent). Nearly 4 in 10 (37 percent) of those with a plan through Covered California, a group that may be getting subsidies for coverage, say that their coverage was less expensive than they expected, while a quarter say it cost more and a third say the cost is about what they expected (Figure 14). 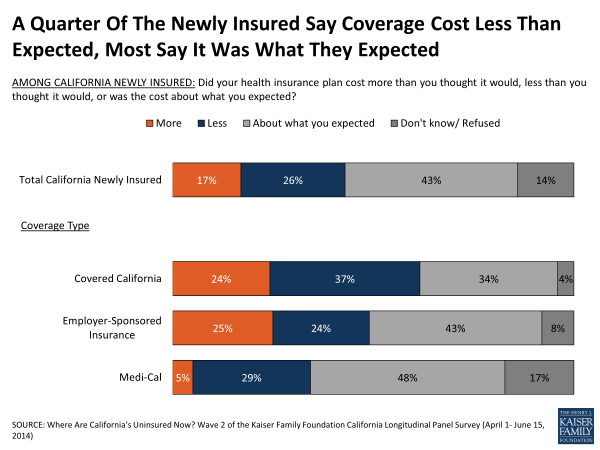 The majority (55 percent) of the newly insured with a plan through Covered California report getting financial assistance and the vast majority of these say they wouldn’t have been able to afford coverage without it.1

What Was Their Experience Shopping For Coverage?

For the most part, the newly insured report having had at least a somewhat easy time finding the information they needed about getting health insurance (80 percent), comparing the monthly premium cost (73 percent) and out of pocket cost sharing under different plans (71 percent), and finding a plan that meets their needs (65 percent). About 4 in 10 report difficulty comparing the services that would be covered under each plan, but still 57 percent say that was easy as well (Figure 15). 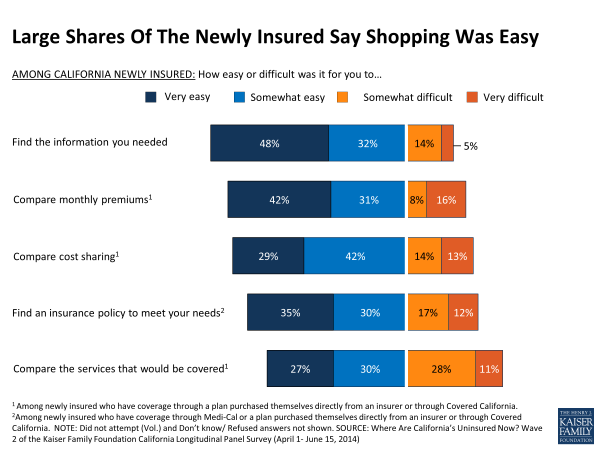 Three quarters (75 percent) of the newly insured with a plan through Covered California report having a choice of plans, suggesting that at least some are unaware of opportunities to shop and compare costs and coverage for a variety of plans. They report that the main factors in their choice were monthly premium costs (34 percent) and out of pocket costs (22 percent), followed by the choice of doctors and hospitals (9 percent) and the range of benefits covered (7 percent). Forty-three percent of new Medi-Cal enrollees report having a choice in plans, and the main factors they report in their decision were the choice of doctors and hospitals (16 percent), the range of benefits covered (10 percent) and the low cost of the plan (7 percent).

While the Covered California website had one of the smoother launches compared to the national healthcare.gov or other state-based exchanges, it and the 1-800 number were still plagued by technical glitches and long wait times.2 Among the previously uninsured who say they successfully enrolled in some type of coverage, just over 4 in 10 (43 percent) say they visited the website during the open enrollment period, and the majority of them found their visit at least somewhat helpful. And, for those who ultimately enrolled in a Covered California plan, 72 percent say they visited the website, including just over half found it helpful (55 percent) (Figure 16). Fewer report calling the Covered California 1-800 number (26 percent); a share that rises to 54 percent of those who now report having a plan through Covered California. Like the website, most of the newly insured found it helpful. Modest shares of the remaining uninsured report visiting the website (30 percent) or calling the 1-800 number (15 percent) but in contrast to the newly insured, most found their attempts unhelpful (see Section 3 for more on the experiences of the remaining uninsured). 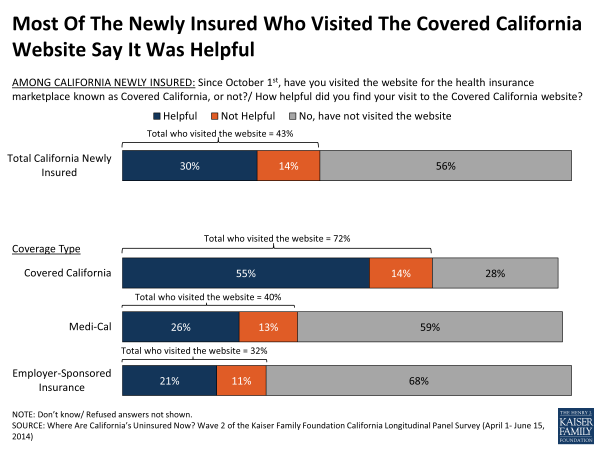 How Did People Enroll? Did They Have Help? 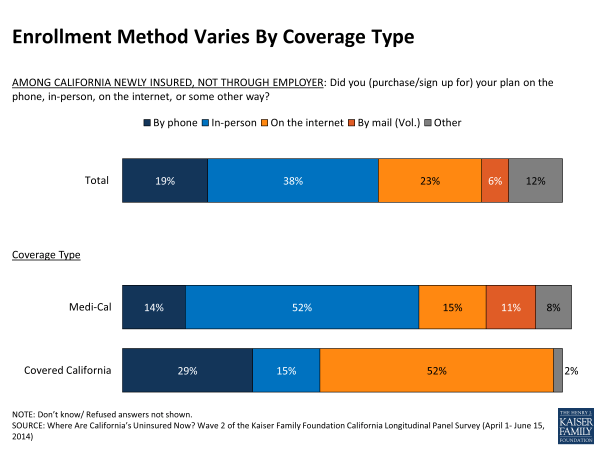 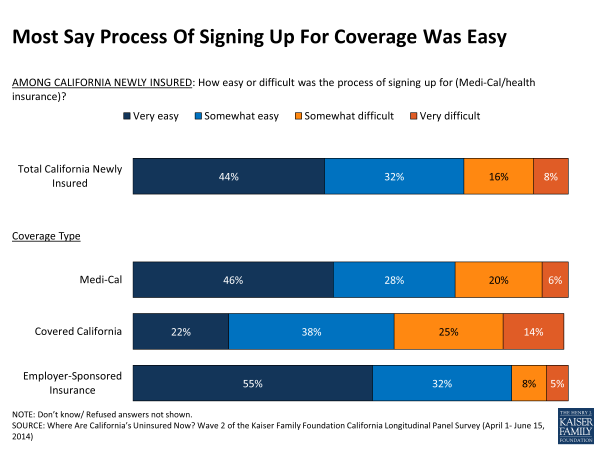 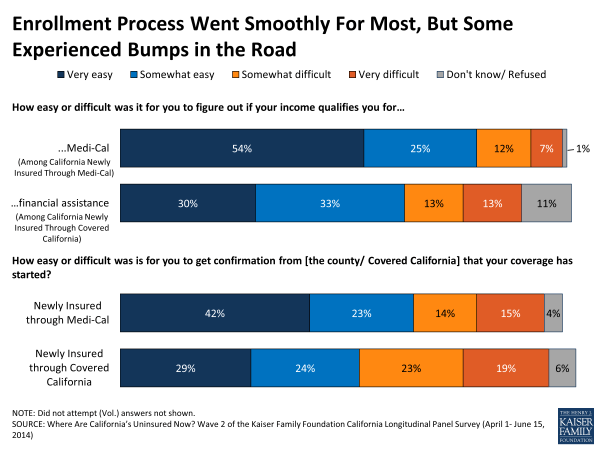 What Do The Newly Insured Understand About Their New Coverage?

Of the newly insured, over 60 percent report having been uninsured for over two years and 1 in 5 say they had never had insurance before now, indicating that many in this group may not be well versed in the often complicated nature of health insurance. But when it comes to their new plan, a large majority of the newly insured say they feel like they understand the coverage and the out-of-pocket costs of their plan at least somewhat well (Figure 21). These shares are similar across different plan types. 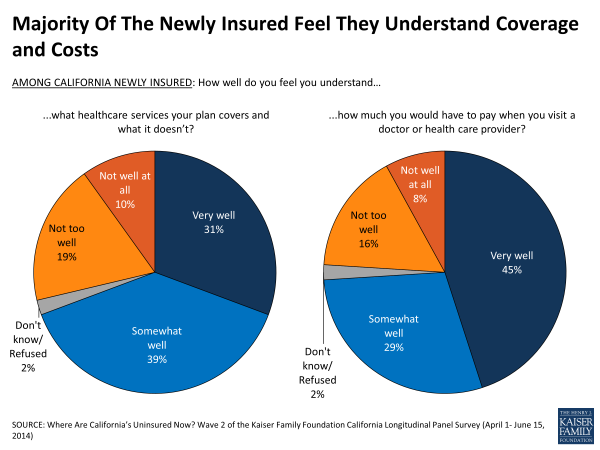 In an effort to make it easier for people to shop and compare health plans, non-group insurance is now categorized into metal levels (platinum, gold, silver and bronze). Half (50 percent) of the newly insured with plans through Covered California say they signed up for the silver option, followed by bronze (18 percent), platinum (4 percent) and gold (2 percent).3 One in 4 (24 percent) didn’t know the answer to this question about their plan.

The newly insured haven’t had their insurance plans for long, but a large majority reports positive experiences with their coverage so far, including 78 percent of Medi-Cal enrollees and about 6 in 10 of Covered CA enrollees (Figure 22). Four in ten (43 percent) say they have visited a doctor since enrolling, and a few of those who visited a doctor (15 percent, or 6 percent of the newly insured overall) say they experienced a problem using their insurance, including limited provider networks and other access issues. Future waves of the panel survey will further explore the newly insured’s interactions with health care providers as they have more experience using their new insurance. 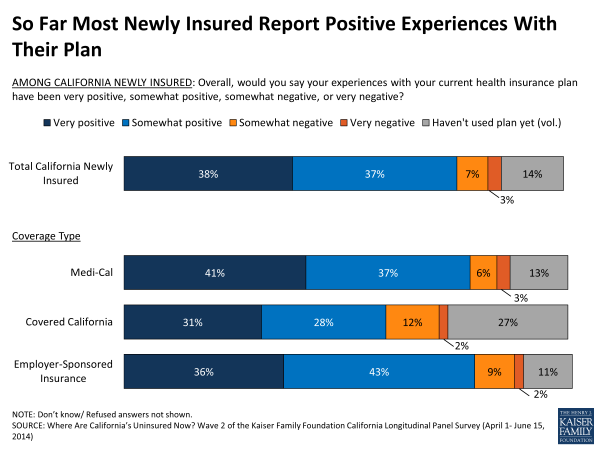 Enrollment And Shopping Experiences Among Hispanics

Making up over half of California’s uninsured population before open enrollment began, Hispanics were an important target of outreach and enrollment efforts during the first open enrollment period. Fifty two percent of Hispanics who were previously uninsured now report having insurance, most of whom say they signed up for Medi-Cal. 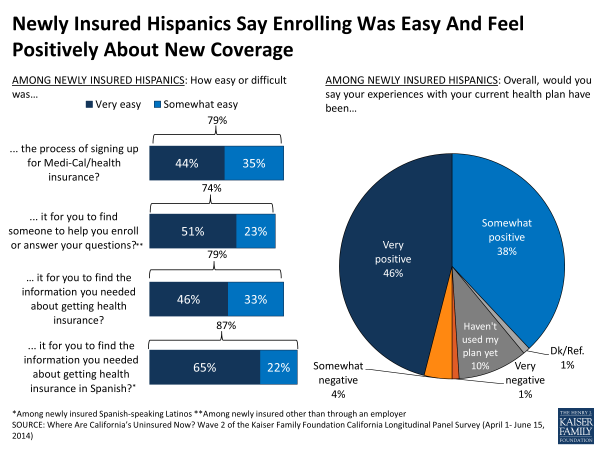 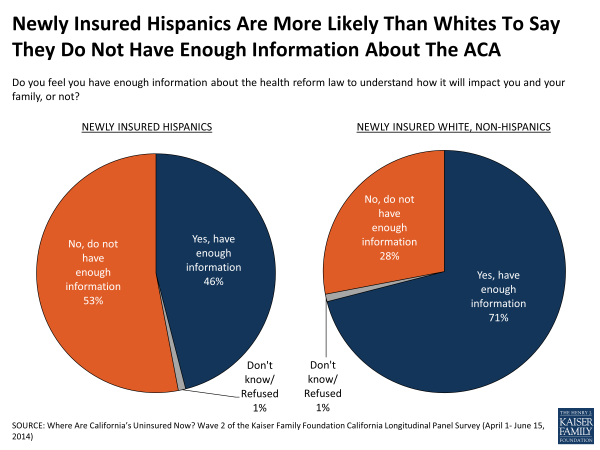 Section 1: Who Got Covered? Section 3: The Remaining Uninsured