Background: The Challenge of Expanding Health Coverage in Missouri

Lack of insurance coverage has been a longstanding policy challenge both nationwide and in Missouri. Not having health insurance has well-documented adverse effects on people’s use of health care, health status, and mortality, as the uninsured are more likely to delay or forgo needed care leading to more severe health problems.1 Lack of insurance coverage also has implications for people’s personal finances, providers’ revenue streams, and system-wide financing.2,3,4Because public coverage has been extended to many children and Medicare covers nearly all of the elderly, the vast majority of uninsured people are non-elderly adults.

Missouri is home to over 800,000 uninsured nonelderly individuals, or 16% of the nonelderly population in the state.5 While the uninsured rate is lower than the national rate of 18%, the state’s uninsured population faces unique challenges. Primary care access is an issue for many state residents – over one in three people in Missouri live in a primary care Health professional shortage area (HPSA), limiting access to health care services.6 Missouri also has a substantial rural population, about 37% of the state.7 The rural population faces higher poverty rates than the urban population, and many rural families have limited access to employer coverage.8 The rural population also faces unique health care access issues: almost all rural counties are HPSAs, and lack of access to hospital and specialty services forces many rural residents to travel long distances to obtain care.9 Despite a significant rural population, a large percentage of the uninsured population in Missouri resides in two of the largest metro areas – St. Louis and Kansas City.10 Additionally, in St. Louis, over half of the city’s residents and over 40% of residents in Kansas City identify as a race other than White.11 Missouri is also surrounded by four states that have expanded Medicaid, creating a geographic inequality of health coverage.12

Medicaid provides health care coverage to may poor and low-income individuals. However, historically eligibility for Medicaid was restricted to specific categories of poor and low-income individuals, such as children, their parents, pregnant women, the elderly, or individuals with disabilities. In many states, including Missouri, adults without dependent children were ineligible regardless of their income. All states previously expanded eligibility for children to higher levels than adults through Medicaid and the Children’s Health Insurance Program (CHIP), and in Missouri, children with family incomes up to 305% of poverty (about $71,800 for a family of four) are eligible for Medicaid or CHIP. As was the case before the ACA, undocumented immigrants remain ineligible to enroll in Medicaid and recent lawfully residing immigrants are subject to certain Medicaid eligibility restrictions.13 As of January 2014, Medicaid eligibility for adults in Missouri was limited to parents with incomes below 23% of poverty, or about $5,500 a year for a family of four.14 Adults without dependent children remain ineligible regardless of their income.15

The uninsured rely on safety net providers to receive needed health care services. The health care safety net in Missouri’s second largest city, St. Louis, has suffered major provider losses in the past. The city and the state have countered these losses and preserved funding through an 1115 Medicaid waiver.16 The waiver program previously provided funding to safety net providers such as health centers and clinics.17 Today, the waiver program, now known as Gateway to Better Health, provides primary and specialty care services to uninsured adults who reside within the City and County limits.18 Eligibility for the waiver includes nonelderly uninsured adults ages 19-64 who are not eligible for Medicaid or Medicare, who are a patient at a participating health center, have incomes below 100% of poverty. The latest model of the waiver, extended to 2015, is designed to provide coverage to uninsured adults until they are able to enroll in coverage expansions under the ACA. 19 From 2012-2013, Gateway provided coverage to more than 28,000 uninsured adults in the St. Louis area who received 47,000 primary and dental visits as well as more than 28,000 specialty and diagnostic care visits.20 The program also provided care that prevented at least 50,000 emergency room visits in 2012.

To address the challenge of the uninsured, the Affordable Care Act (ACA) includes an expansion of Medicaid and the creation of new Health Insurance Marketplaces. With the Supreme Court ruling in June 2012, the Medicaid expansion became optional for states, and as of March 2014, Missouri had opted not to expand its Medicaid program. This decision has created a “coverage gap” among poor adults. Under the ACA, people with incomes between 100% and 400% of poverty may be eligible for premium tax credits when they purchase coverage in a Marketplace. Because the ACA envisioned low-income people receiving coverage through Medicaid, people below poverty are not eligible for Marketplace subsidies. Thus, some adults in Missouri will fall into a “coverage gap” of earning too much to qualify for Medicaid but not enough to qualify for premium tax credits. People in the coverage gap are ineligible for financial assistance under the ACA, while people with higher incomes will be eligible for tax credits to purchase coverage.

In Missouri, about 23% of the uninsured fall into a coverage gap of earning too much money to qualify for Medicaid, but not enough to qualify for premium tax credits in the marketplace.21 These individuals have incomes below 100% of poverty. A small number of uninsured adult parents (4% of the uninsured in the state)22 are eligible for Medicaid in Missouri under existing eligibility pathways in place before the ACA. Not all eligible individuals are enrolled in Medicaid due to lack of knowledge about their eligibility and additional enrollment barriers. While the uninsured poor can purchase unsubsidized coverage in the Marketplace, they are unlikely to find coverage that is affordable.

While the state is not operating its own Marketplace or expanding Medicaid, there is some state activity around the ACA. Changes to the Medicaid enrollment process occurred in 2014, regardless of expansion decisions. Missouri must make Medicaid determinations based on new modified adjusted gross income (MAGI) eligibility levels. As of December 2013, Missouri’s MAGI conversation was in progress.25 The ACA also established a streamlined enrollment process for all states that allows people to use one single application for Marketplace or Medicaid coverage. Individuals are able to apply for coverage through HealthCare.gov, the state Medicaid/CHIP website, in person, on the phone, or through the mail. In addition, Medicaid eligibility determinations will now use verification based on existing data sources such as Social Security Administration data, rather than requiring families to provide paper documentation.26

Governor Jay Nixon (D), who supported state expansion of Medicaid, continues to support the expansion.27 While the legislature opposes the Medicaid expansion, efforts are currently underway in the legislature to find alternative ways to cover the uninsured and expand Medicaid, such as placing work requirements on Medicaid recipients or requiring monthly premiums.28 However, a recent report from the Missouri Department of Economic Development (state agency) indicated that expanding Medicaid would create 24,000 jobs in the state and bring in $9.9 billion in new wages and $402 million in state revenue over eight years.29

The impact of the expansion will also be greatest among those with the highest need. Additional research has also indicated that if Missouri expanded Medicaid, the most dramatic impact would be in rural areas – 31% of the uninsured population would gain coverage compared to 26% in St. Louis and 27% in Kansas City (Missouri’s two largest cities).30 Many advocates in the state, including the Missouri Hospital Association, continue to push lawmakers to adopt the Medicaid expansion.

Based on past evaluations of coverage expansions, targeted outreach and enrollment strategies are essential for reaching eligible populations. In Missouri, prior to open enrollment, the state legislature passed legislation creating extensive requirements for outreach and enrollment workers, also known as navigators, who receive federal funding to enroll people in coverage.31 These requirements, also passed in several other states, were considered prohibitive and were subsequently challenged in court. The regulation was recently struck down by a federal judge in January 2014.32 Regardless of the ruling, in February 2014, the Missouri State Senate passed legislation that requires navigators to pass exams, secure bonds, and pass background checks.33 Despite a lack of funding, advocates and organizations in the state are actively trying to enroll those who are eligible for coverage. Cover Missouri, a coalition led by the Missouri Foundation for Health, organized enrollment events throughout the state to reach and enroll Missourians in Medicaid or a Marketplace plan.34

The federally-facilitated Marketplace (FFM) for Missouri began accepting applications for coverage on October 1, 2013 through HealthCare.gov. Numerous issues with the website were initially experienced by individuals attempting to gain coverage, but many of those issues have since been resolved.35 The FFM also makes assessments of Medicaid eligibility based on pre-ACA levels, but the state makes the final determination after receiving the information.

As of February 1, 2014, over 50,000 Missourians have selected a health plan in the Marketplace, and about 27,000 were determined eligible for Medicaid and CHIP through the Marketplace.36 Additionally, over 6,000 people were determined eligible for Medicaid or CHIP at application through the state Medicaid agency.37 However, recent reports indicate a backlog of Medicaid determinations by the state from HealthCare.gov. The state Medicaid agency reported a sharp decline in Medicaid enrollment in 2014 due to the improving economy in Missouri, yet recent reports indicate that enrollment has dropped due to a back log in renewals and new applications.38 The state recently transitioned to accepting online applications, and the state reports the delays in eligibility determinations are due to the new systems.39 Enrollment for Medicaid coverage is continuous throughout the year and does not end with open enrollment (March 31, 2014).

A Profile of The Uninsured in Missouri

Barriers to coverage in the past and state demographics are reflected in the characteristics of the uninsured population in Missouri. For example, 41% of uninsured adults are poor (that is, living below the poverty line) and generally not eligible for coverage expansions, in contrast to 6% of adults with employer coverage (Figure 1 and Appendix Table A1). Adults with Medicaid are the most likely of any coverage group to be poor, reflecting the fact that adult income eligibility is limited. Further, the majority of uninsured Missourians live in families where they or their spouse are working (62%) (Figure 2).  However, not surprisingly, uninsured adults in Missouri are less likely than adults with employer coverage or nongroup to be in a working family. 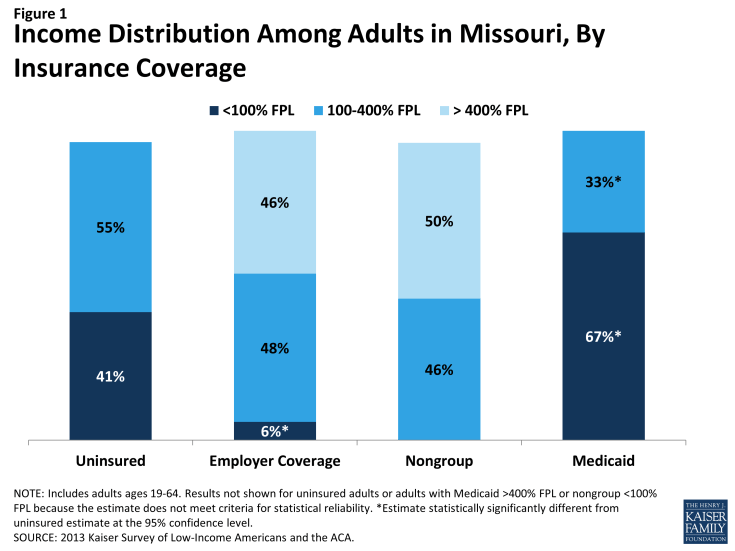 Figure 1: Income Distribution Among Adults in Missouri, By Insurance Coverage 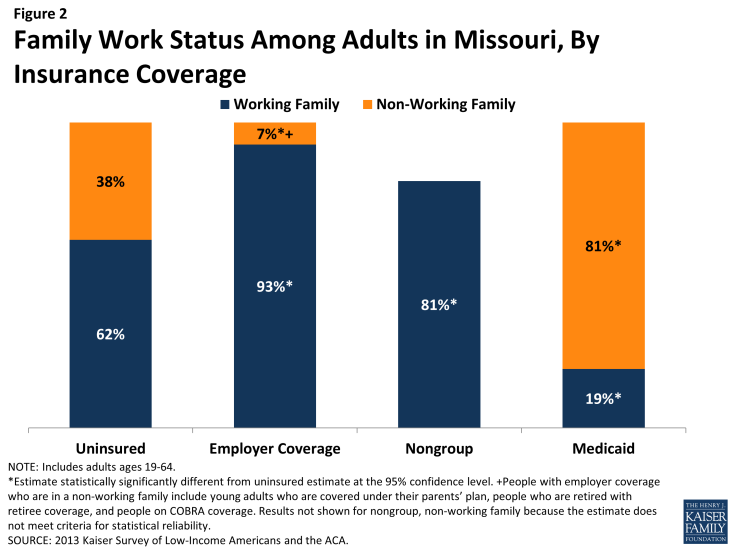 As efforts continue to reach, educate, and enroll individuals into health coverage under the ACA, it is important to remember who the ACA aims to help and how their characteristics and previous interactions with the health system may inform efforts to connect with them. The demographics of the uninsured also highlight the population who is likely to remain uninsured without a Medicaid expansion and will likely continue to need services provided by the safety net.

Introduction I. Patterns of Coverage and the Need for Assistance