Poor and moderate-income families in Missouri face multiple financial challenges on a daily basis, but a major challenge is the cost of health care. Insurance provides some financial protection for many poor adults in Missouri, but many still struggle to pay their share of premiums or other costs associated with care. Poor and moderate-income adults without coverage are particularly vulnerable, facing even more financial strain than their insured counterparts. Both insured and uninsured adults in Missouri struggle with medical bills and debt. Coverage expansions, assistance with premium costs, and limits on out-of-pocket costs under the ACA have the potential to ameliorate the financial issues associated with the cost of health care, but many uninsured adults, primarily poor adults, will be left without any assistance.

Health care costs pose a challenge for poor and moderate-income families in Missouri, even if they have insurance coverage. 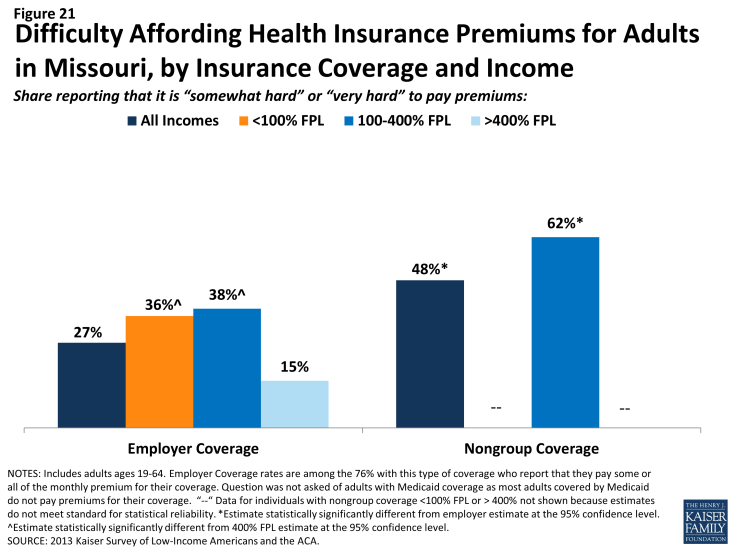 Health care costs translate to medical debt for many poor adults. While almost half (48%) uninsured adults in Missouri have outstanding medical bills, many insured Missouri adults also reported high rates of medical bills that are unpaid or being paid off over time (Figure 22). For example, 31% of adults with employer coverage and 42% of adults with Medicaid coverage reported having medical debt. The share of Medicaid adults with medical debt is not significantly different from the share of uninsured adults. The high level of debt among adults with Medicaid is likely indicative of the population eligible in Missouri – either extremely low-income parents or adults with disabilities and high medical expenses. Missouri’s Medicaid program allows for aged, blind, and disabled beneficiaries with high out of pocket costs to spend down their assets to qualify for coverage.1 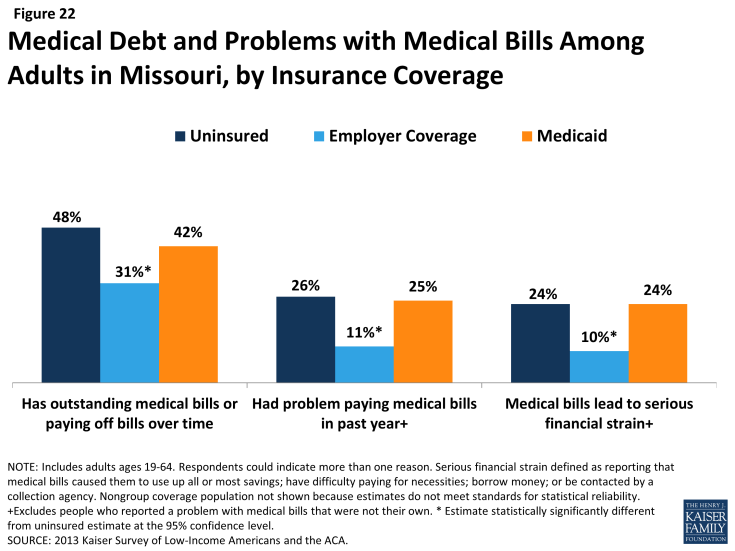 Figure 22: Medical Debt and Problems with Medical Bills Among Adults in Missouri, by Insurance Coverage

People may report medical debt but not have a problem paying that debt. However, when asked directly whether they had problems paying medical bills in the past year, notable shares of uninsured adults (26%) and adults with Medicaid (25%) reported that they did (Figure 22).  In many cases, the problems people had paying medical bills were severe. Many reported that medical bills caused them to either use up all or most of their savings, have difficulty paying for necessities, borrow money, or be contacted by a collection agency.

In addition to many poor adults in Missouri reporting that they experienced financial strain or difficulty with health care costs, many live with worry about their ability to afford costs in the future. The vast majority of uninsured Missouri adults across all income groups reported that they lack confidence that they can afford either the cost of care for services they typically require (Figure 23) or the cost of care should they face a major illness (Figure 24). While not surprising, this finding indicates that uninsured adults in Missouri are aware of the high cost of health care services, as even those with moderate or high incomes do not believe they can afford these costs. 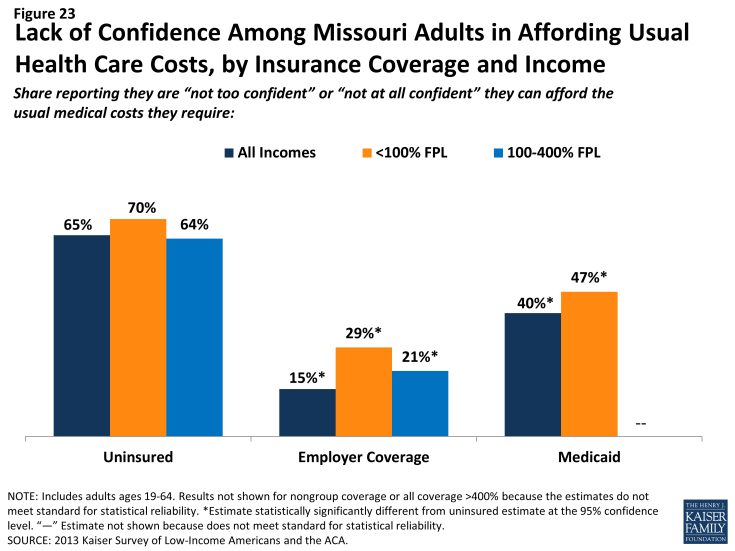 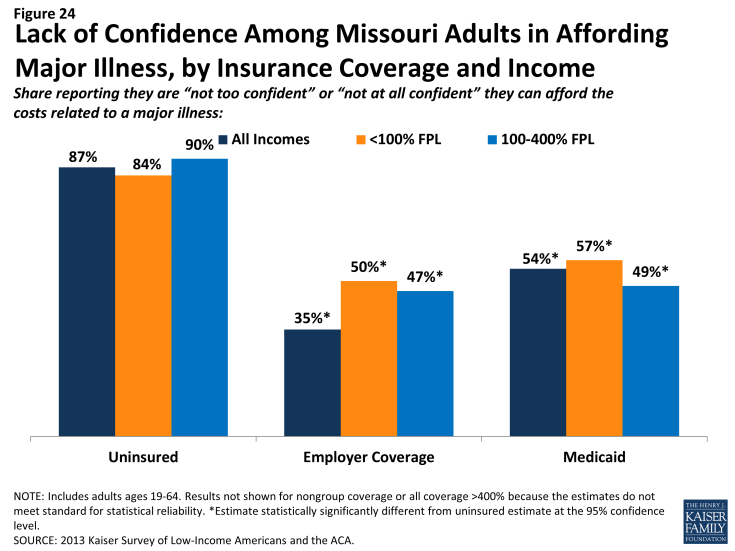 Figure 24 – Lack of Confidence Among Missouri Adults in Affording Major Illness, by Insurance Coverage and Income

One role of insurance coverage is to protect people against these costs, particularly unexpected costs related to major illnesses or accidents. However, notable shares of poor insured Missouri adults reported that they lack confidence in their ability to afford health care, given their current finances and health insurance situations. Four in ten adults with Medicaid coverage reported lack of confidence in affording usual costs and over half reported lack of confidence in affording costs for a major illness; these findings appears to be driven by higher need among Medicaid beneficiaries (as those with disabilities reported particularly high rates) or worry about keeping coverage (as those who had problems with renewal also reported high rates) (data not shown). Of particular note is the finding that 50% of poor adults in Missouri with employer coverage do not feel confident that they could afford costs related to a major illness given their coverage and financial situation. Lack of confidence may reflect worry about affording out-of-pocket costs or concerns over limits on coverage.

Affordability provisions in the ACA may ameliorate some of the challenges that poor insured Missourians face in affording care. Under the law, qualified health plans must cover preventive services with no cost sharing and are prohibited from placing annual or lifetime caps on the dollar value of insurance coverage. In addition, plans may not exclude coverage for pre-existing conditions, which often were excluded from nongroup plans in the past and may have led to high out-of-pocket costs for insured individuals. Last, Missourians who purchase coverage through the Missouri Marketplace and have incomes up to 400% FPL receive tax credits to help them pay for their premiums, and those with incomes up to 250% FPL also receive subsidies to help with cost sharing under their plans. However, given survey findings that many poor insured people continue to face financial challenges related to health care, people may perceive even limited out-of-pocket costs to be unaffordable. It will be important to track whether there are ongoing financial barriers as people enroll in coverage and seek care. Further, many poor uninsured adults in the state will remain ineligible for financial assistance and are likely to continue to face financial hardship due to health care costs.

As discussed above, poor Missouri adults across coverage groups experience difficulty or worry about paying for health care. These challenges translate to expenses in other areas as well, and poor and moderate-income adults across coverage groups reported not being financially secure. However, adults in Missouri who are poor and uninsured or covered by Medicaid are particularly vulnerable to financial insecurity even outside of health care.  Among those with incomes <100% FPL, almost seven in ten uninsured adults (69%) reported that they feel generally financially insecure (Figure 25). Notably, there are no significant differences across coverage groups among poor adults, as adults with Medicaid reported the same rates of financial insecurity and over half of adults with employer coverage also reported insecurity (51%). This pattern may reflect the tenuous financial situation of adults with incomes below 100% FPL, regardless of insurance. 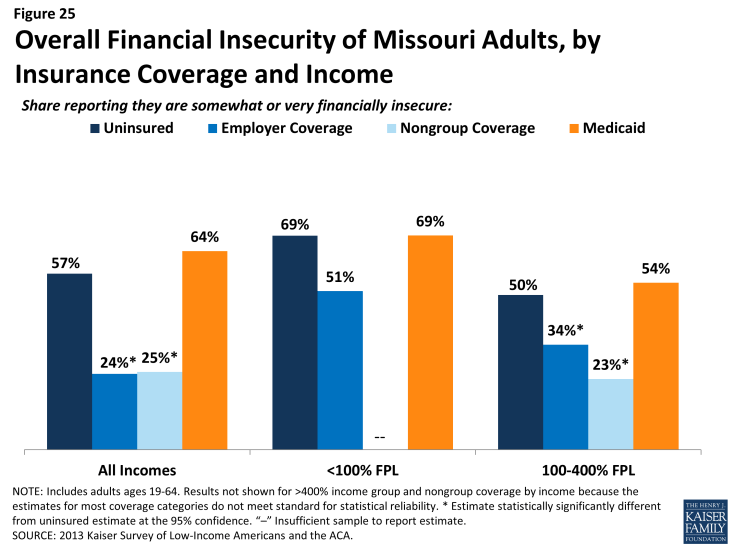 General financial insecurity translates to concrete financial difficulties in making ends meet. Uninsured adults and those on Medicaid are more likely than privately-insured adults (those with employer coverage or nongroup) to have difficulty paying for other necessities, such as food, housing, or utilities, with 49% and 61%, respectively, reporting such difficulty, compared to 20% of those with employer coverage and 25% of those with nongroup coverage (Table 5). While poor adults (<100% FPL) in Missouri across the coverage spectrum reported high rates of difficulty paying for necessities, those with employer coverage reported the lowest rates in this income group. These individuals may have the stronger or more stable ties to employment than their counterparts with other or no insurance coverage. A similar pattern holds for people’s ability to get ahead financially, either saving money or paying off debt.

Similarly high levels of adults across income and coverage groups reported that they have taken on debt or taken money out of their savings to pay bills in the past year or report changing their living situation or postponing marriage or children for financial reasons (Table 5).

Though it is not surprising that many poor families are in a precarious financial situation, it is notable that poor adults who lack insurance coverage or who were covered by Medicaid before the ACA are more financially unstable than their privately-insured counterparts. This finding is of particular concern given that slightly less than half of uninsured adults in Missouri, those below poverty, are left out of the coverage expansions and will likely remain uninsured. In Missouri, Medicaid coverage for adults is targeted to those with the greatest need, and this role is reflected in the fact that they face similar financial challenges as their uninsured counterparts. While insurance coverage can provide financial protection in the event of illness or injury, it is not curative of all of the financial burdens faced by poor families. Given their overall situation, health insurance alone may not lift poor people out of poverty, and many poor adults may continue to face financial challenges even after gaining coverage. However, gains in coverage under the ACA may address some of the consequences of financial instability among moderate-income families, and linking adults with other support systems may help address the broader financial challenges that they face.