While many currently uninsured adults have limited experience in signing up for and using health coverage, the past successes and challenges of insured low-and moderate income adults can inform the experiences of those seeking coverage under the ACA. A majority of insured adults do not experience problems in choosing, enrolling in, and using their coverage, and this pattern holds true for both people with Medicaid and private insurance. Still, based on the experience of their insured counterparts, the uninsured population targeted by the ACA coverage expansions is likely to encounter some barriers in the process of choosing and enrolling in coverage. While the ACA aims to make the process smoother, it is likely that some challenges inherent in the complexity of health coverage will require concerted efforts to address.

Most adults did not report problems in applying for and enrolling in Medicaid coverage prior to the ACA, but some encountered difficulties in the process of gaining public coverage in the past.

In comparison to the process for gaining coverage through an employer—which is typically facilitated by the firm or a representative and may require limited action on the part of the insured—applying for publicly-financed coverage typically requires proactive steps to gain coverage. Adults who currently have Medicaid or who have attempted to enroll in the past five years report little difficulty in taking steps to enroll in Medicaid. Half of adults (50%) who applied to Medicaid said the entire process was very or somewhat easy. However, the rest found at least one aspect of the process – finding out how to apply, filling out the application, assembling the required paperwork, or submitting the application – to be somewhat or very difficult. The most commonly reported difficulty was assembling the required paperwork, which a third (33%) of people who enrolled or applied said was a somewhat or very difficult (Figure 7 and Appendix Table A3).

Historically, the Medicaid application process often required in-person visits to state or county welfare offices and completion of paper-based applications. In recent years, most states have made strides towards developing web-based applications to facilitate access to coverage and ease administrative burdens.1 However, a plurality (38%) of people who have applied to Medicaid in the past five years report that they did so through traditional routes—that is, in person at a state or county government office—and only 17% reported using an online application (Figure 8).

The ACA includes provisions to simplify the application and enrollment process for coverage in all states, regardless of whether they are expanding their Medicaid program. For example, the ACA establishes new requirements for simplifying the Medicaid application, coordinating enrollment across programs, and moving toward paperless verification of eligibility. These requirements include state adoption of a single streamlined application that is available online, by phone, and on paper and that screens for all health coverage options; electronic transfers of accounts between agencies to facilitate coordination across health coverage programs; and reliance on trusted sources of electronic data rather than requesting paper documentation to verify eligibility criteria.2 Further, under the ACA, assisters are available in each state to help individuals and families enroll in coverage. Thus, uninsured adults applying for coverage should encounter fewer challenges in navigating the enrollment process than applicants have in the past. However, in states that do not expand their Medicaid programs, few adults applying for coverage are likely to be eligible, given very low income eligibility limits in those states. As a result, the primary barrier of lack of eligibility will remain. 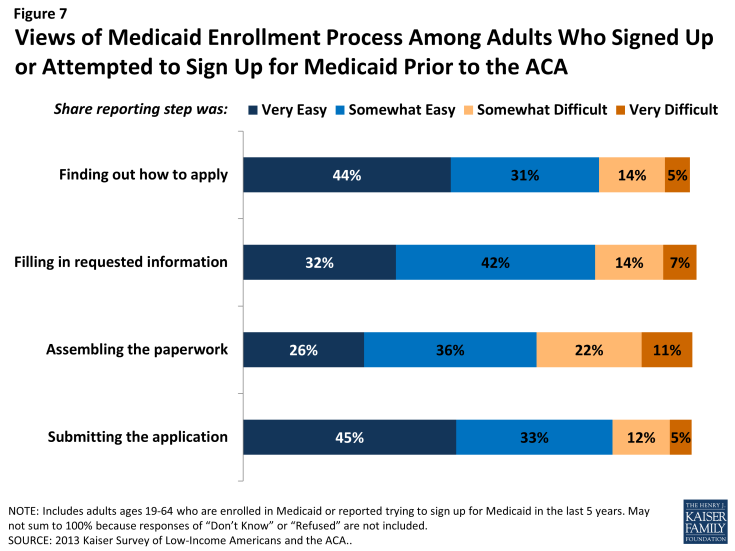 Figure 7: Views of Medicaid Enrollment Process Among Adults Who Signed Up or Attempted to Sign Up for Medicaid Prior to the ACA 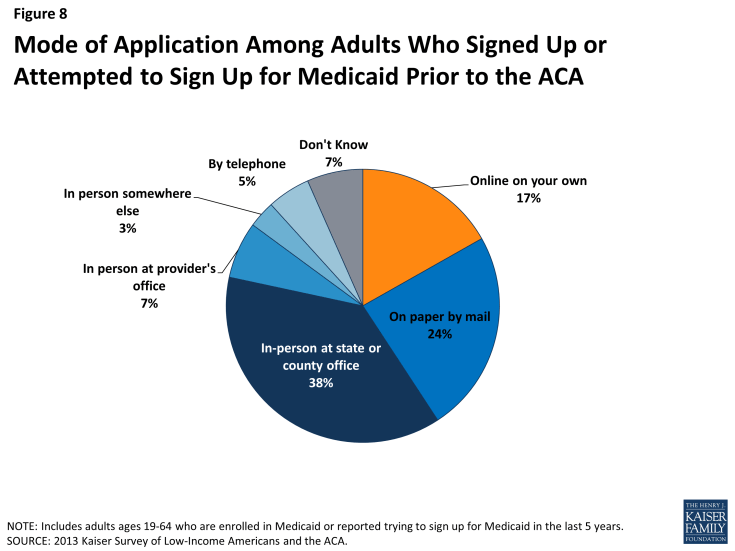 Figure 8: Mode of Application Among Adults Who Signed Up or Attempted to Sign Up for Medicaid Prior to the ACA

In choosing their Medicaid or private insurance plan, adults do not always prioritize costs, and many find some aspect of the plan choice process to be a challenge.

As people gain coverage, many will have the option to select an insurance plan. People may chose a particular plan for a variety of reasons, including low cost, choice of providers, recommendations from friends and family, or coverage of a particular benefit. Among the 50% of insured adults who chose a health plan,3 32% reported that they chose their plan because it covered a wide range of benefits or a specific benefit that they need, while 29% reported that they chose their plan because their costs would be low and 22% because the plan had a broad selection of providers or included their doctor (Figure 9). This pattern differs by coverage type (see Appendix Table A4). For example, among Medicaid beneficiaries who had a plan choice, 33% reported provider network as the main reason for plan choice compared to 17% of adults with non-group coverage and 21% with employer coverage. These findings may reflect the fact that Medicaid benefits and costs are largely standardized across plans, while networks may vary.

In choosing a plan, people may face challenges in comparing costs, services, and provider networks, as these factors typically varied greatly across plans in the past. In general, insured adults report that they did not have difficulty in comparing their plan choices, but 36% found some aspect of plan choice—comparing services, comparing costs, and comparing providers— to be difficult (Figure 10 and Appendix Table A4). Insured adults were least likely to report difficulty comparing costs across plans (17%). This finding is particularly interesting as most people reported choosing their plan based on covered services or benefits as compared to costs. As enrollment numbers for particular plans are released and policymakers begin to assess plan choice among new enrollees, these findings can inform evaluations of plan choice under the ACA. Contrary to expectations that people may opt for the lowest cost plan,4 survey findings indicate that people place value on a range of factors related to insurance, including scope of services and provider networks. Thus, assessments of whether people are choosing the optimal plan for themselves and their families will need to consider the multiple priorities that people balance in plan selection. Further, while ACA provisions requiring plans in the Marketplace to provide a standard set of benefits as well as more detailed information on what is included in plans could potentially increase the ease of plan selection, it is important to bear in mind historical challenges people have faced in comparing and selecting insurance coverage. In particular, low-income adults who receive Medicaid may require assistance in navigating plan choices, as provisions requiring comparable information on plans for coverage in the Marketplaces do not apply to Medicaid. However, states can make such information available to Medicaid enrollees as part of an effort to improve the plan selection process. 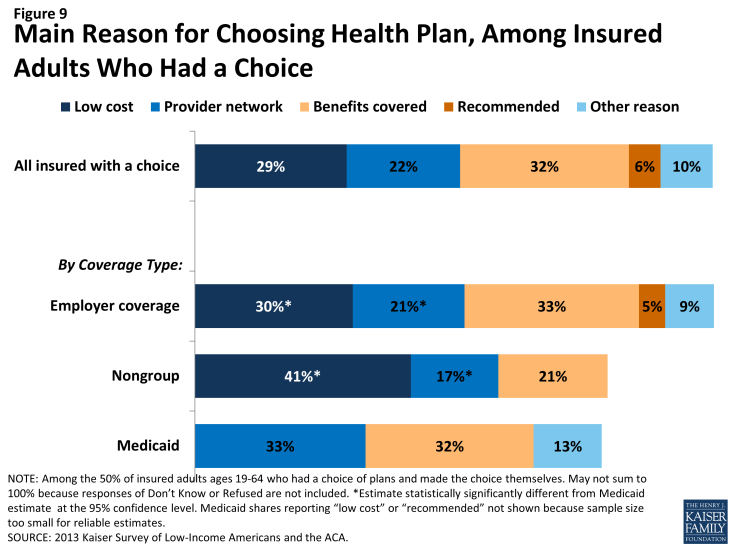 Figure 9: Main Reason for Choosing Health Plan, Among Insured Adults Who Had a Choice 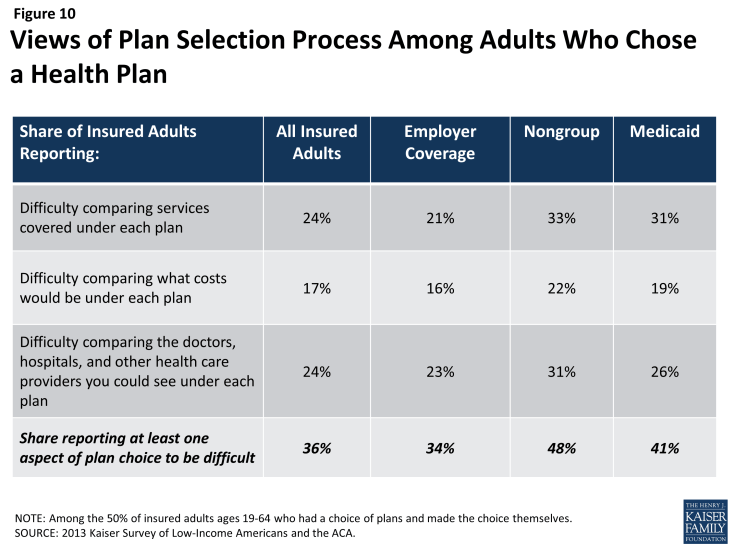 Figure 10: Views of Plan Selection Process Among Adults Who Chose a Health Plan

Overall, insured adults report satisfaction with their current coverage but also report gaps in covered services and problems when using their coverage.

Despite the high ratings, notable shares of insured adults report a problem with their plan. Specifically, one in six (17%) insured adults report needing a service that is not covered by their current plan (Figure 12 and Appendix Table A5). People with Medicaid coverage (26%) or non-group coverage (27%) are more likely to report that their plan does not cover certain services compared to those with employer coverage (13%). The most frequently-reported services people say they need but lack coverage for are ancillary services such as dental, vision care, and chiropractor services. In private health coverage, these ancillary services are often covered under stand-alone private insurance policies that must be purchased separately from health coverage. In Medicaid, most are not federally-required benefits for adults but rather are covered at state option; while states must provide a broad spectrum of Medicaid benefits for children, they have more flexibility in designing benefits for adults. Lack of coverage for adult dental services in Medicaid—the most frequently reported service needed but excluded from coverage—has been a longstanding issue facing beneficiaries and providers, despite a particularly high need among the low-income population.5

Insured adults also report experiencing other problems with their insurance plan. Many insured adults reported experiencing a problem with their current insurance plan covering a specific benefit, either because they were denied coverage for a service they thought was covered (25%) or their out-of-pocket costs for a service were higher than they expected (37%). Some of these services may be over-the-counter products, which are excluded from the majority of insurance plans but which people believe their plan should cover. Reports of these difficulties varied by insurance coverage. Adults with Medicaid or with nongroup coverage (both 34%) were more likely than those with employer coverage (21%) to report they were surprised that their plan would not cover a service they believed was covered. However, adults with Medicaid (22%) were less likely to report facing higher costs than expected than privately insured adults (38% among those employer coverage and 48% among those with non-group). This pattern most likely reflects the nominal out of pocket costs Medicaid beneficiaries are required to pay compared to the high cost-sharing of many private plans.

Among the goals of the ACA are ensuring that the coverage people gain provides at least a basic level of coverage and that new ways of purchasing coverage via the Marketplaces make it easier for people to navigate the insurance system. Thus, new coverage must include a set of essential health benefits (EHB), and participating plans in the Marketplace must report information on claims payment policies, cost-sharing requirements, out-of-network policies, and enrollee rights in plain language. These provisions may address some of the problems that insured adults have experienced with their coverage in the past, but uninsured adults—particularly those with limited experience enrolling in coverage—may need more help with plan selection. Further, many of the services that people report needing coverage for—such as dental and vision services—are not included in the EHB. Many newly-insured people may be surprised to learn that some ancillary services are not included in their plan, and education efforts will be needed to make sure people understand their coverage. Despite these possible challenges, most insured people—even those who report difficulties—are satisfied with their coverage overall. 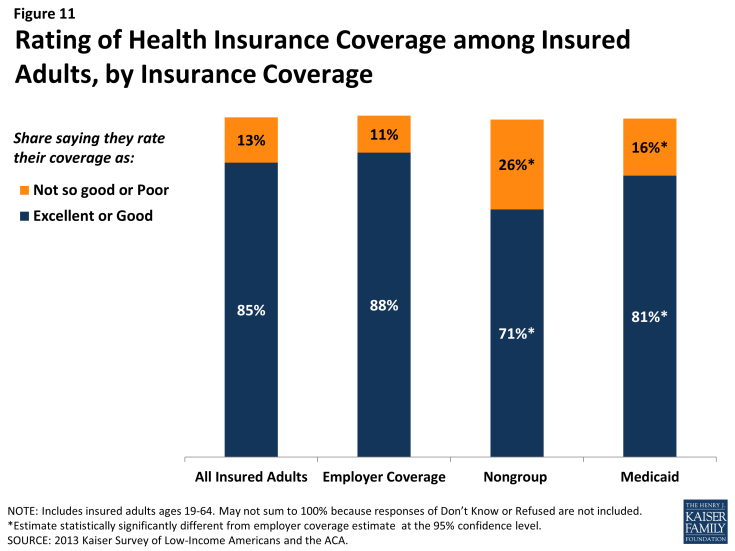 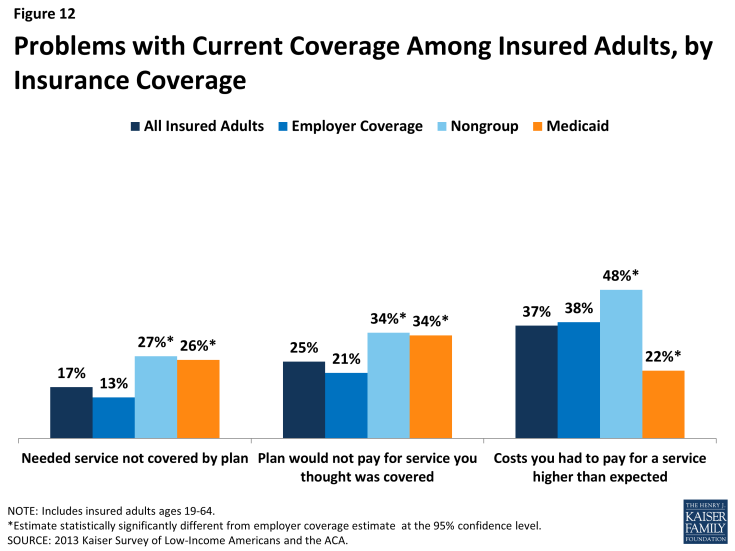