What are the financial implications of lacking insurance?

For many uninsured people, the costs of health insurance and medical care are weighed against equally essential needs, like housing, food, and transportation to work, and many uninsured adults report being very or moderately worried about paying basic monthly expenses such as rent or other housing costs and monthly bills.1 When uninsured people use health care, they may be charged for the full cost of that care (versus insurers, who negotiate discounts) and often face difficulty paying medical bills. Providers absorb some of the cost of care for the uninsured, and while uncompensated care funds cover some of those costs, these funds do not fully offset the cost of care for the uninsured.

Most uninsured people do not receive health services for free or at reduced charge. Hospitals frequently charge uninsured patients two to four times what health insurers and public programs actually pay for hospital services.2, 3 In 2015, only 27% of uninsured adults reported receiving free or reduced cost care.4

Uninsured people often must pay “up front” before services will be rendered. When people without health coverage are unable to pay the full medical bill in cash at the time of service, they can sometimes negotiate a payment schedule with a provider, pay with credit cards (typically with high interest rates), or be turned away.5,6 Among uninsured adults in 2015, a third (33%) were asked to pay for the full cost of medical care before they could see a doctor.7

People without health insurance have lower medical expenditures than those with insurance, but they pay a much larger portion of their medical costs out-of-pocket. Nonelderly people without health coverage had an average of $1,719 in health spending in 2016, less than half of average annual spending for people with any private coverage ($4,846) and less than a third of average annual spending for people with only public coverage ($6,421).8 Despite lower overall medical spending, people without insurance who use services pay a greater percentage of their expenses out-of-pocket than those with insurance. As a result, in 2014, those without insurance who used medical services paid an average of $752 out of pocket, compared to $658 for those with any private coverage and just $236 for those with public coverage.9

Providers incur billions in the cost of uncompensated care for the uninsured, not all of which is offset by funding to defray these costs. In 2013, before the ACA was fully implemented, the uncompensated costs of care for the uninsured amounted to about $85 billion, and funding from a number of sources helped providers defray these costs. Most of these funds came from the federal government through a variety of programs including Medicaid and Medicare disproportionate share hospital (DSH) payments, the Veterans Health Administration, the Indian Health Service, the Community Health Centers block grant, and the Ryan White CARE Act, though states and localities provided billions and the private sector provided a small share. Given the high cost of hospital-based care, the majority of the cost of uncompensated care is incurred in hospitals. While substantial, these payments to providers for uncompensated care amount to a small slice of total health care spending in the U.S.10 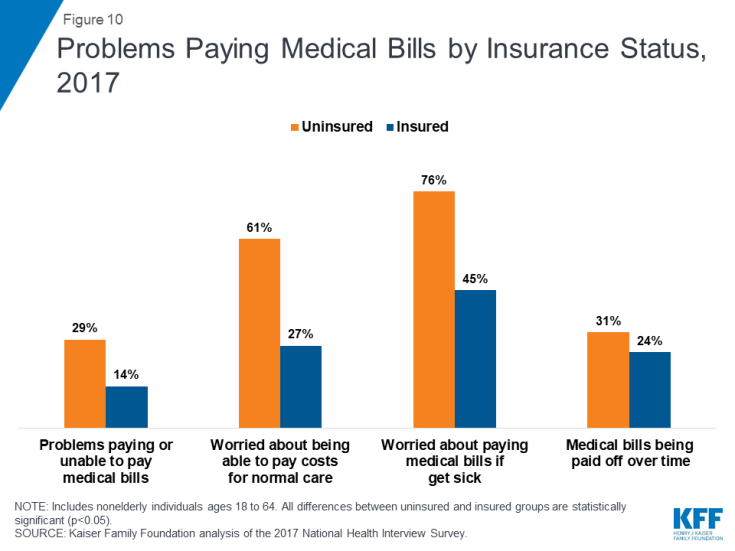 Most uninsured people have few, if any, savings or assets they can easily use to pay health care costs. Uninsured people typically have limited access to funds to finance care. Only 40 and 50 percent of single- and multi-person households with an uninsured person, respectively, had liquid assets in excess of $1,000 in 2016, and less than a fifth (18 percent) in both household types had liquid assets above $5,000.16 Uninsured nonelderly adults are over twice as likely as insured adults to worry about being able to pay costs for normal health care (61% vs. 27%; Figure 10). Furthermore, over three quarters of uninsured nonelderly adults (76%) say they are very or somewhat worried about paying medical bills if they get sick or have an accident, compared to 45% of insured adults.17

How does lack of insurance affect access to care? Conclusion