Before the ACA, the number of uninsured Americans grew over time, particularly during economic downturns. By 2013, the year before the major coverage provisions of the ACA went into effect, more than 44 million people lacked coverage.1 Under the ACA, millions of people have gained health coverage, and the uninsured rate dropped to a historic low in 2016. Coverage gains were particularly large among low-income people living in states that expanded Medicaid. However, for the first time since the implementation of the ACA, the number of people remaining without coverage increased by half a million in 2017, reaching 27.4 million. 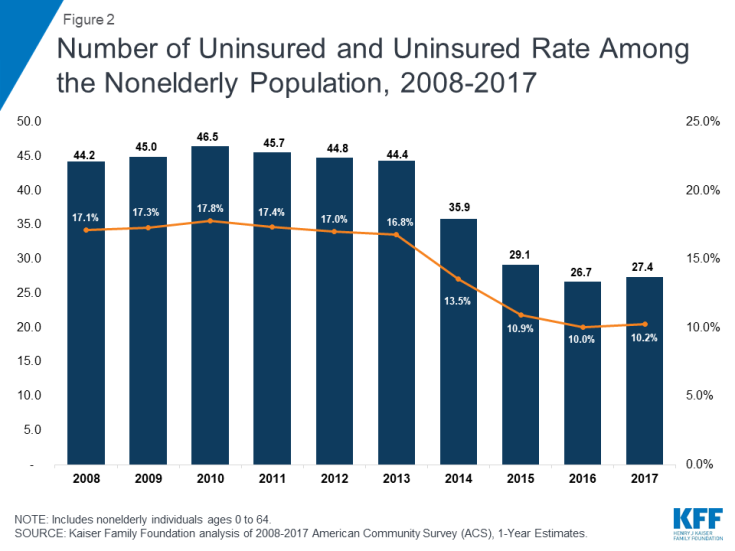 Figure 2: Number of Uninsured and Uninsured Rate Among the Nonelderly Population, 2008-2017

Coverage gains through 2016 were largest among low-income people, people of color, and adults—groups that had high uninsured rates prior to 2014—and were particularly large in states that expanded Medicaid. While uninsured rates decreased across all income groups from 2013 to 2016, they declined most sharply for poor and near-poor people, dropping by 9.7 percentage points and 11.4 percentage points, respectively (Figure 3). Among racial and ethnic groups, Hispanics, Blacks, and Asians had particularly large declines in uninsured rates, with each group seeing a drop of over 8 percentage points from 2013 to 2016 (Figure 3).3 Because the expansions are largely targeted to adults, who have historically had higher uninsured rates than children, nearly the entire decline in the number of uninsured people under the ACA has occurred among adults. Uninsured rates dropped nearly immediately in expansion states following implementation of the ACA’s coverage provisions, declining by 7.4 percentage points from 2013 to 2016, with even larger declines among adults (a 9.2 percentage point drop) widely attributed to gains in Medicaid coverage. Uninsured rates among the nonelderly population also dropped in non-expansion states following ACA implementation (down 5.9 percentage points), in part as a result of the availability of ACA subsidies for private insurance to those with incomes above poverty, increased participation among those eligible but not enrolled in Medicaid, and increased outreach and enrollment efforts surrounding the ACA in all states.4 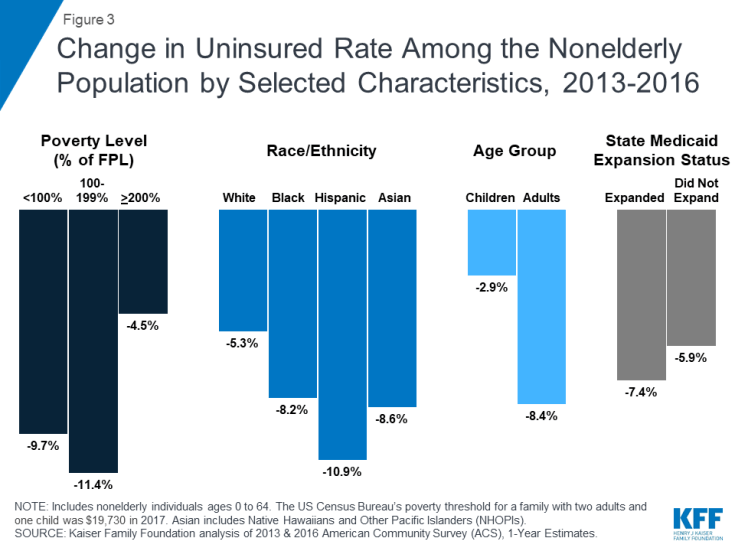 Figure 3: Change in Uninsured Rate Among the Nonelderly Population by Selected Characteristics, 2013-2016

In 2017, the uninsured rate reversed course and, for the first time since the passage of the ACA, rose significantly to 10.2%. Groups that saw significant increases in their uninsured rate from 2016 to 2017 include Black, non-Hispanics, children, older adults (age 45-64), and middle-income families (above twice the poverty level) (Appendix Table 1). From 2016 to 2017, changes in the uninsured rate in the set of states that expanded Medicaid were essentially flat overall, declining by less than 0.1 percentage points, but patterns varied by states and by demographic group (Figure 4). In contrast, the uninsured rate in states that did not expand Medicaid increased both overall (rising by 0.6 percentage points) and for most groups. As with expansion states, changes in coverage from 2016-2017 varied within the set of states that have not expanded Medicaid. 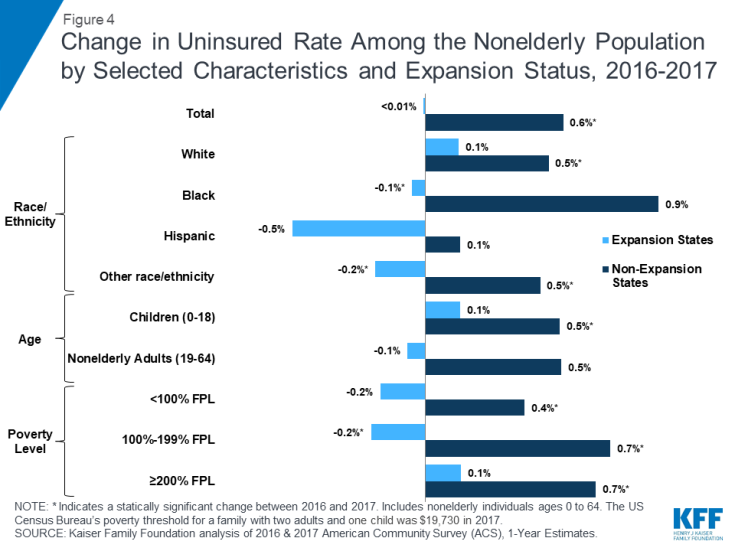 Figure 4: Change in Uninsured Rate Among the Nonelderly Population by Selected Characteristics and Expansion Status, 2016-2017

Many remain uninsured are eligible for ACA assistance, but about half are outside the reach of the ACA. Of the remaining uninsured in 2017, more than half (15.0 million, or 55%) are eligible for financial assistance through either Medicaid or subsidized marketplace coverage. However, nearly half of uninsured people remain outside the reach of the ACA. Some (4.1 million, or 15%) are ineligible due to their immigration status or their state’s decision not to expand Medicaid. The remainder of the uninsured either has an offer of coverage through an employer or has income above the limit for marketplace tax credits (Figure 5). These patterns of eligibility vary by state.5 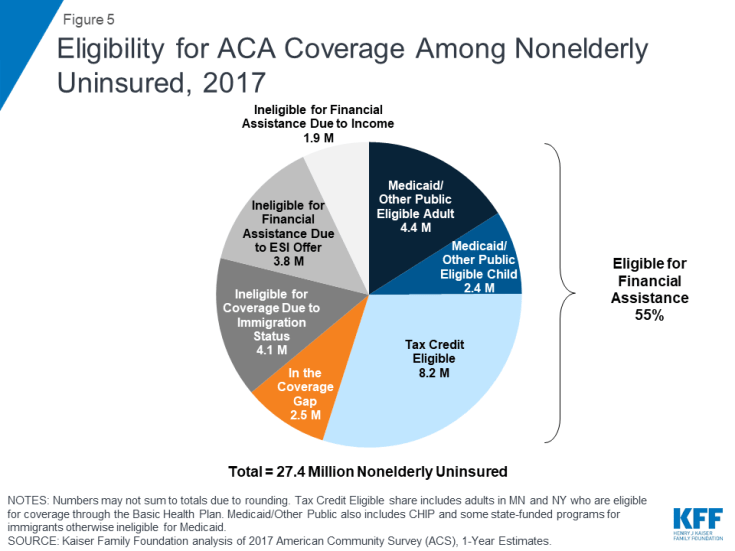 In the fourteen states that had not expanded Medicaid as of January 2019, 2.5 million poor adults fall into a “coverage gap.”6 These adults have incomes above Medicaid eligibility limits in their state but below the lower limit for marketplace premium tax credits, which begin at 100% of poverty. In non-expansion states, the median income eligibility level for parents is 43% of poverty and 0% for childless adults.7 People in the coverage gap are concentrated in Southern states, with the largest number of people in the coverage gap in Texas (759,000 people, or 31%) followed by Florida (445,000, or 18%), Georgia (267,000, or 11%), and North Carolina (215,000, or 9%).8

How have health insurance coverage options and availability changed under the ACA? Who remains uninsured after the ACA and why do they lack coverage?