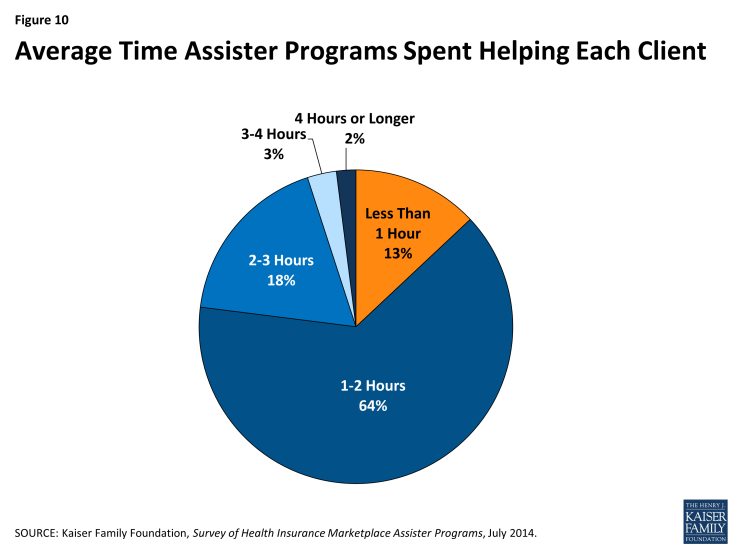 Demand for consumer assistance sometimes exceeded capacity.  For the first Open Enrollment period overall, most Assister Programs found they had enough staff and other resources to help most people who sought help most of the time.  Close to four in ten Assister Programs, though, report they could not help all who sought assistance; 12% said the demand for help far exceeded their capacity to provide it. 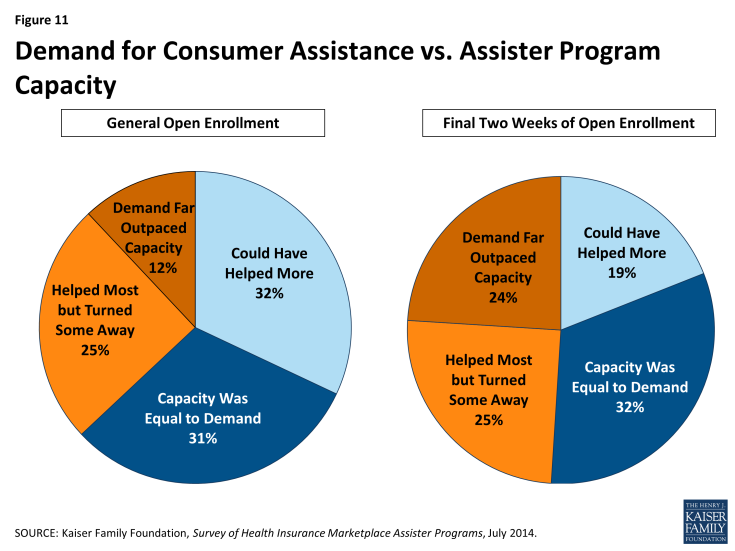 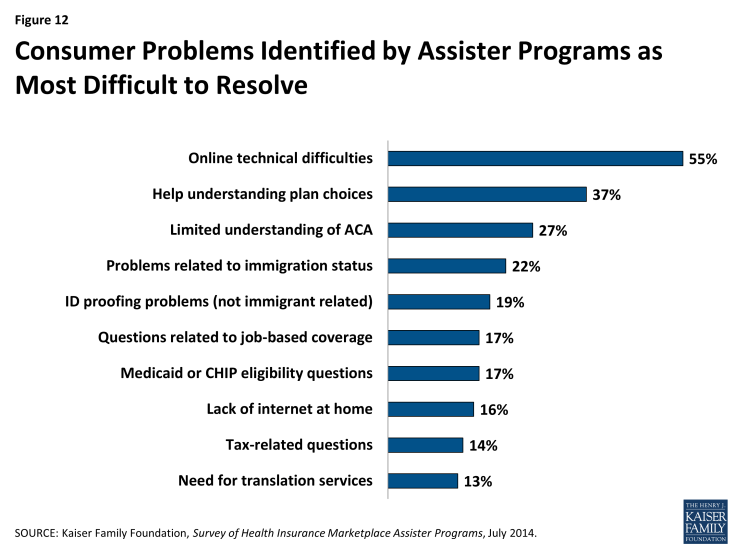 Figure 12: Consumer Problems Identified by Assister Programs as Most Difficult to Resolve

Shortcomings in available health plan information hindered the ability of Assister Programs to help consumers evaluate QHPs. Another common challenge had to do with the quantity and quality of health plan information available through the Marketplace.  Eighty-nine percent of Assister Programs report that at least some of their clients who considered QHPs had questions that weren’t easily answered by information posted on the Marketplace web site; 41% said this was often or almost always a problem for their clients (Figure 13). This finding varied little by Marketplace type or Program type. 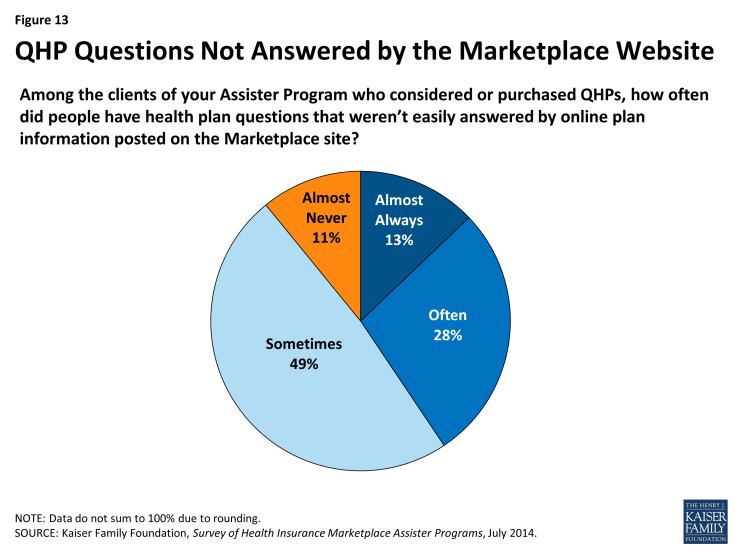 Figure 13: QHP Questions Not Answered by the Marketplace Website

To provide better support for consumers evaluating QHP options, 39% of Assister Programs would like to receive more training on the health plans offered in their Marketplace (Appendix Table 2). In response to open ended questions, Programs also expressed hope that Marketplaces will develop more health plan rating tools and online plan comparison tools.  Some Assister Programs reported that they received briefings by insurance companies on the health plans they offer and found this very helpful.  Other Programs recommended that Marketplaces provide Assisters with more comprehensive QHP information (or require insurers to provide it), and that Marketplaces require insurance companies to make dedicated help lines available to Assister Programs. Some Programs partnered with insurance brokers and agents, who often have access to additional plan information and marketing materials; Programs that did so reported these types of partnerships were helpful.

Explaining ACA requirements to consumers was most difficult for one in four Assister Programs.  This likely reflects the complexity of new ACA eligibility rules and processes, generally.   It may also reflect unique complexities for populations targeted by some Assister Programs – for example, immigrant populations or families with mixed-eligibility status.   Some Programs sought help from outsiders with specialized expertise – for example, tax preparers, immigration advocates, or family lawyers – and when they did so, generally found these partnerships very helpful.

Immigration verification and other identity verification problems were encountered less often by Assister Programs, but when these problems arose they could be challenging.   Twenty-two percent of Programs cited immigration-related problems as the most difficult to help with. For example, some immigrants who did not have established credit ratings had difficulty proving their identity and establishing a Marketplace account.  Others encountered “the yellow screen of death,” a term Assisters used to describe a web site crash triggered when Marketplace computers and Department of Homeland Security computers could not communicate effectively.  Some low-income immigrants who had been living in the U.S. less than five years had difficulty applying for coverage when the Marketplace determined they should be eligible for Medicaid, even though immigrants in this situation cannot enroll in Medicaid and are supposed to be offered premium tax credits instead. Eventually CMS established a “limited circumstances special enrollment period (SEP)” for immigrants who received incorrect eligibility determinations due to system errors so that they would have a chance to re-apply for private coverage and subsidies.2

Programs also report difficulty resolving identity verification problems for consumers.  Nearly one in five Assister Programs reported these cases were the most difficult to help. (Figure 12)  Such problems could arise among young adults with no established credit history. The Marketplaces relied on a commercial credit rating company to automatically verify consumer identification; if people with no credit history could not pass the online system, they would have to provide paper documents to prove their identity before they could complete applications.

Problems with Medicaid and CHIP eligibility determinations also proved challenging for some Assister Programs. Though the ACA requires a single, streamlined application system for all insurance affordability programs – whether private plan subsidies, Medicaid, or CHIP – this was not operational in most states for the first Open Enrollment period.   In addition, the FFM had ongoing technical difficulties transmitting consumers’ application data to state Medicaid programs.3 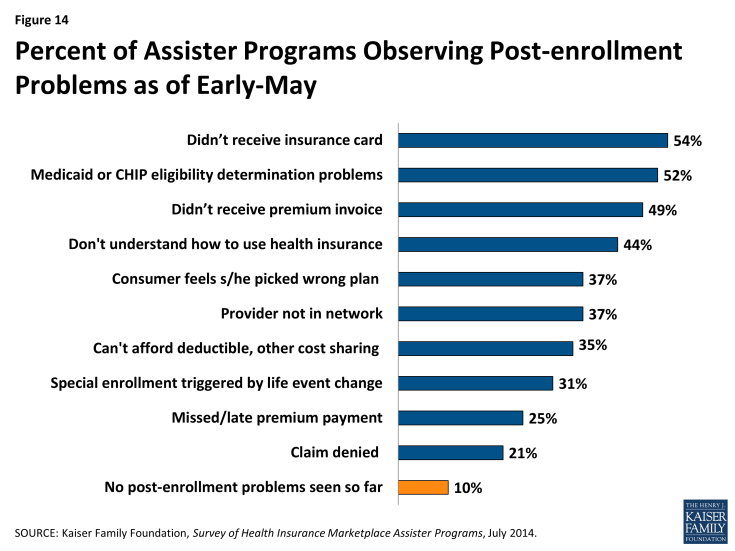 Nearly all Assister Programs report they will try to help consumers with denied claims, disputes with insurers, and other such post-enrollment problems, even though most lack training in this area (Appendix Table 2), and even though they are not required to do so.  The ACA requires Marketplace Assisters (Navigators, IPAs, and FEAPs) to refer consumers with post-enrollment problems to state CAPs.

Under the ACA, State Consumer Ombudsman or CAPs are established to provide comprehensive services to all state residents, including people in employer plans or other non- Marketplace coverage.  Like other Marketplace Assisters, CAPs are required to conduct public education and outreach, help people apply for subsidies, and answer questions.  In addition, CAPs are required to help consumers resolve disputes and appeal denied claims.  Furthermore, all health plans are required to include on all claims statements contact information for the state CAP and a notice that CAPs can file appeals on behalf of consumers.

The ACA appropriated $30 million in initial CAP funding and authorized future appropriations at “such sums as may be necessary,” but to date no new appropriations have been legislated.  Thirty-five state CAPs were established in 2010 with the initial appropriation, and the last round of CAP grants were awarded in 2012.4 Pending additional federal funding, some CAPs remain operational, albeit at reduced levels. 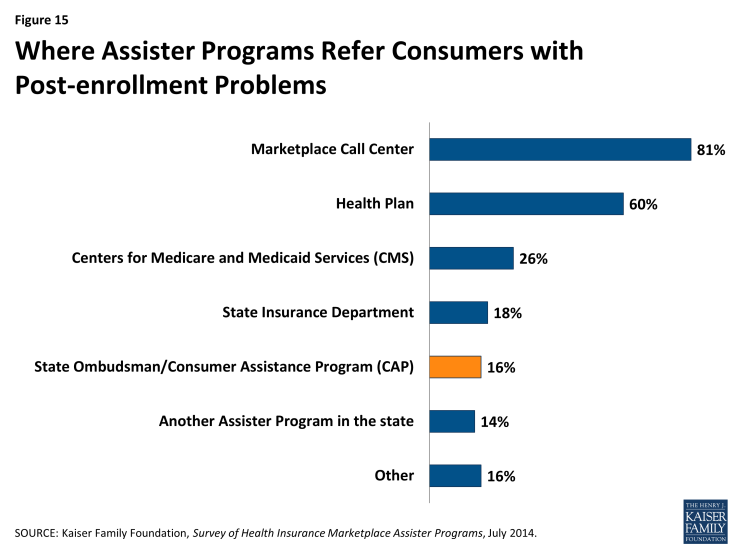 Section 4: Why Did Consumers Seek Help? Section 6: What Improvements Do Assister Programs Seek?