In all, more than 4,400 Marketplace Assister Programs were established to help consumers during the first Open Enrollment. This total is based on Program data provided by all state and federal Marketplaces.  Certified Application Counselor Programs (CACs) account for the largest number of Assister Programs, representing 45% of the total Programs and operating in most states. These Programs are likely most numerous because they faced fewer requirements to get started, needing only to complete the online training and register with the Marketplace.  Programs sponsored by Federally Qualified Health Centers (FQHCs) accounted for 26% of total Assister Programs and operated in every Marketplace. Another 26% of Assister Programs are In Person Assisters (IPAs) operating in states with State-based Marketplaces (SBMs) and Consumer Assistance Federal Partnership Marketplaces (FPMs). While Navigators, which operated in states with a Federally-facilitated Marketplace (FFM), represented only 2% of the total number of Assister Programs, they were more likely to subcontract with other organizations. As a result, the total number of organizations that operated as Navigators is likely somewhat greater than this figure suggests (Figure 1). 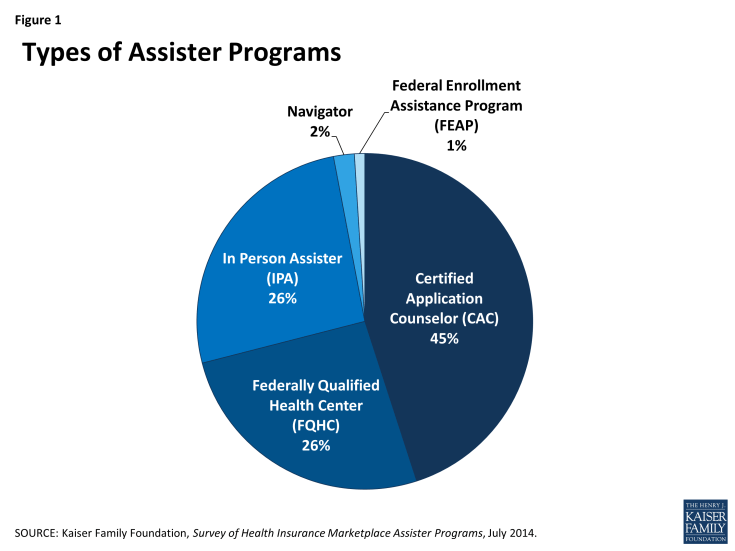 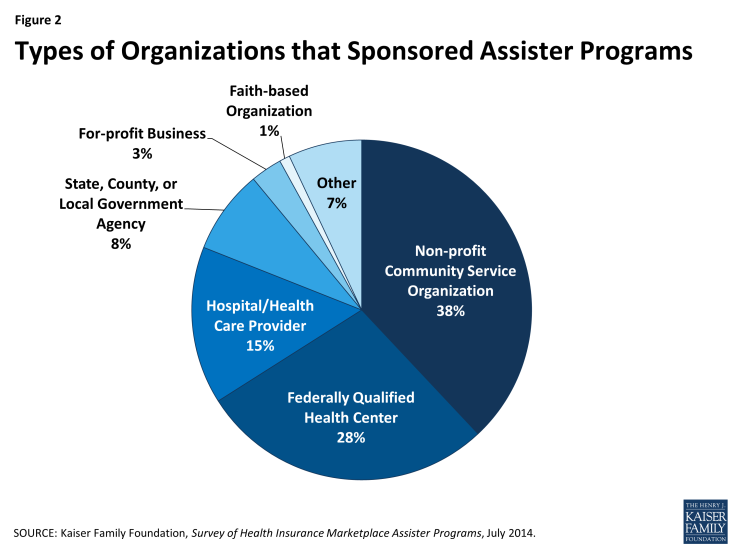 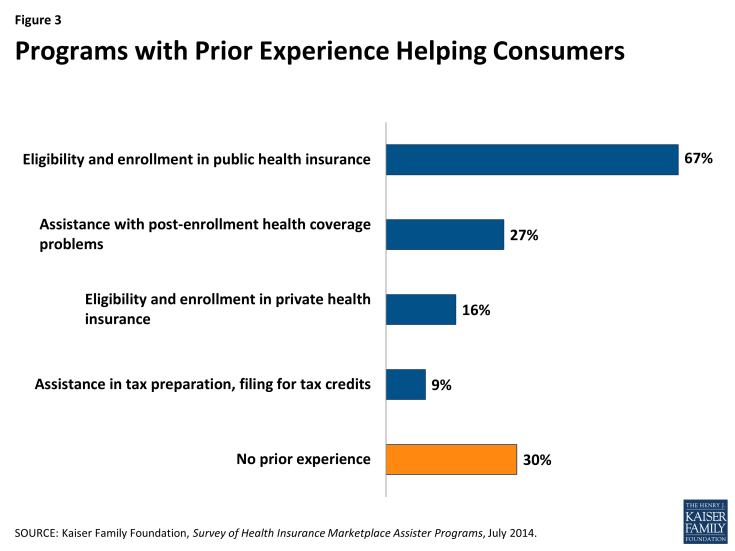 Most Assister Programs served specific geographic areas or targeted population groups.  Just 13% of Assister Programs operated in a statewide service area, the rest served more targeted regions or populations.1  Programs that contracted directly with Marketplaces (Navigators, IPAs and FEAPs) were somewhat more likely to report statewide service areas.  This is likely because Marketplaces sometimes favored applicants who would operate statewide.  Most Assister Programs also operated independently, but one-in-five worked as part of a formal network or coalition of sub-contracting organizations.  Navigators, IPAs and FEAPs were more likely to operate as part of a formal coalition (Table 1).

Assister Programs varied in size and in the number of consumers they helped.  The majority of Programs have a small staff; 71% have five or fewer full-time-equivalent (FTE) staff (paid or volunteer), while 5% of Programs have more than 20 FTE staff.  CACs were more likely than other Assister Programs to have small staffs, with 81% reporting fewer than five FTEs.  CACs were also more likely to rely primarily on volunteers (18% vs. 2% for FQHCs and 9% for other Programs).

Almost half of all Assister Programs report providing eligibility and enrollment assistance to no more than 500 people during Open Enrollment, with 20% of Programs helping 100 or fewer people.  The CAC Programs were most likely to report helping smaller numbers of people; only 19% of CAC Programs said they helped more than 1,000 people.  By contrast, 67% of FQHC Programs and 36% of other Marketplace Assister Programs reported helping more than 1,000 people during Open Enrollment.

Assister Programs engaged in a range of activities during Open Enrollment.  Virtually all Assister Programs reported providing eligibility and enrollment help to consumers, helping them apply for private health insurance and subsidies, as well as Medicaid and CHIP coverage when these options were available.  Over 80% of Programs also provided outreach and education to individuals and families.  These outreach efforts were important to making sure consumers understood what their coverage options were and how to apply for financial assistance.

After eligibility and enrollment assistance and outreach to individuals, the next most-often named activity (named by 77% of Programs) was helping consumers with post-enrollment questions and problems, such as denied claims.  More than half of Programs also reported helping people appeal eligibility determinations.  Only about one-third of Assister Programs engaged in outreach and enrollment assistance to small businesses (Table 3).

Executive Summary Section 2: How Many Assisters Are There and How Many People Did They Help?