Racial Disparities in Maternal and Infant Health: An Overview

Approximately 700 women die in the U.S. each year as a result of pregnancy or its complications.2 Pregnancy-related deaths are deaths that occur within one year of pregnancy. Approximately one third occur during pregnancy, over half (56%) occur during labor or within the first week postpartum, and another 13% occur between six weeks and one year,3 underscoring the importance of access to health care beyond the period of pregnancy. Due to variations in reporting and data collection, it is possible that the number of pregnancy-related deaths is underestimated, and that the maternal mortality rate is much higher.4,5

Black and AIAN women have higher rates of pregnancy-related deaths compared to White women. Black and AIAN women have pregnancy-related mortality rates that are over three and two times higher, respectively, compared to the rate for White women (40.8 and 29.7 vs. 12.7 per 100,000 live births) (Figure 1). This disparity persists even in California, where maternal mortality rates are lower than the national average and have been on the decline; yet, the rate is more than three times higher among Black women compared to White women.6 There were small differences in the rate pregnancy-related death between Asian and Pacific Islander and White women (13.5 vs. 12.7 per 100,000), and the rate for Hispanic women was lower compared to that of White women (11.5 vs. 12.7 per 100,000). These findings may mask underlying differences in subgroups of these populations.7 Further, other research also shows that Black and Hispanic women are at significantly higher risk for severe maternal morbidity, such as preeclampsia, which is significantly more common than maternal death.8,9 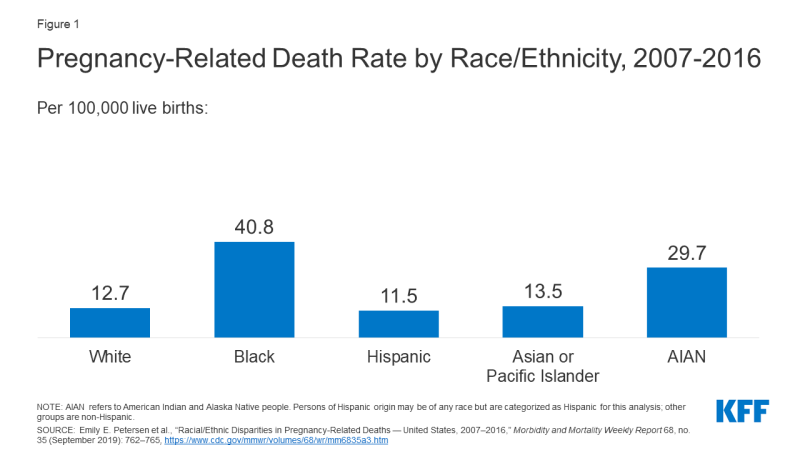 Black, AIAN, and NHOPI women are more likely to have certain birth risk factors that contribute to infant mortality and can have long-term consequences for the physical and cognitive health of children. Preterm birth (birth before 37 weeks gestation) and low birthweight (defined as a baby born less than 5.5 pounds) are some of the leading causes for infant mortality. Not receiving pregnancy-related care until late in a pregnancy (defined as starting in the third trimester) or not receiving any pregnancy-related care at all can also increase risk of pregnancy complications since early and regular prenatal care is important for monitoring health, managing existing medical conditions, and sharing health information. Black, AIAN, and NHOPI women have higher shares of preterm births, low birthweight births, or births for which they received late or no prenatal care compared to White women (Figure 2). Notably, NHOPI women are five times more likely than White women to not begin receiving prenatal care until the third trimester or to no receive any prenatal care at all (20% vs. 4%). Hispanic women also are twice as likely compared to White women to have a birth with late or no prenatal care compared to White women (8% vs. 4%). 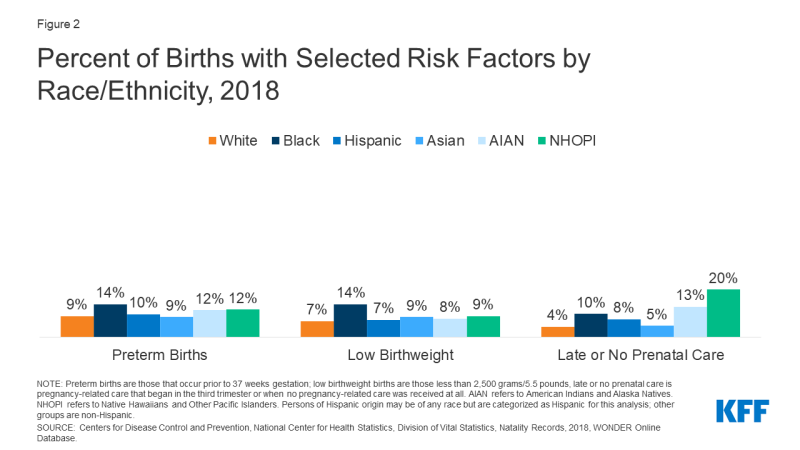 Figure 2: Percent of Births with Selected Risk Factors by Race/Ethnicity, 2018​

Teen birth rates are higher among Black, Hispanic, AIAN, and NHOPI teens compared to their White counterparts (Figure 3). In contrast, the birth rate among Asian teens is lower than the rate for White teens. Pregnant teens may be less likely to receive early and regular prenatal care. Teen pregnancy also is associated with increased risk of complications during pregnancy and delivery, including preterm birth.13 Teen pregnancy and childbirth can also have social and economic impacts on teen parents and their children.14 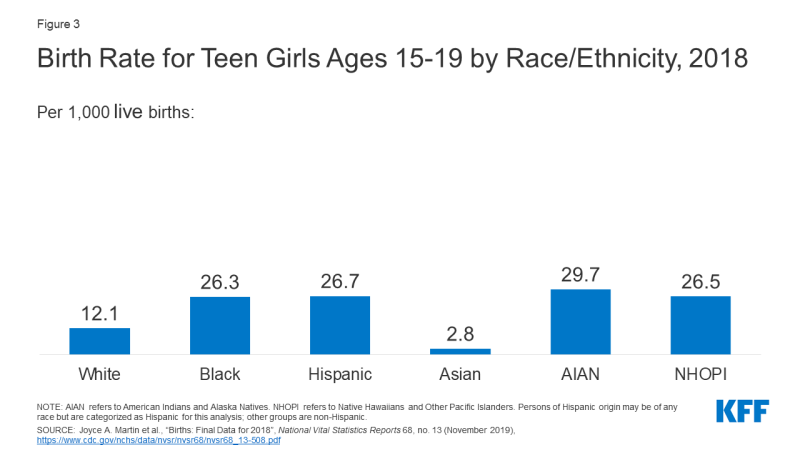 Reflecting these increased risk factors, infants born to women of color are at higher risk for mortality compared to those born to White women. Infant mortality is defined as the death of an infant within the first year of life, but most cases occur within the first month after birth.15 The primary causes of infant mortality are birth defects, preterm birth and low birthweight, maternal pregnancy complications, sudden infant death syndrome, and injuries.16 Infants born to Black and NHOPI women are over twice as likely to die relative to those born to White women (10.8 and 9.4 vs. 4.6 per 1,000), and the mortality rate for infants born to AIAN women (8.2 per 1,000) is nearly twice as high (Figure 4). The mortality rate for infants born to Hispanic mothers is similar to the rate for those born to White women (4.9 vs. 4.6 per 1,000), while infants born to Asian women have a lower mortality rate (3.6 per 1,000). Data also show that fetal death or stillbirths—that is, pregnancy loss after 20-week gestation—are more common among Black women compared to White and Hispanic women. Moreover, causes of stillbirth vary by race and ethnicity, with higher rates of stillbirth attributed to diabetes and maternal complications among Black women compared to White women.17 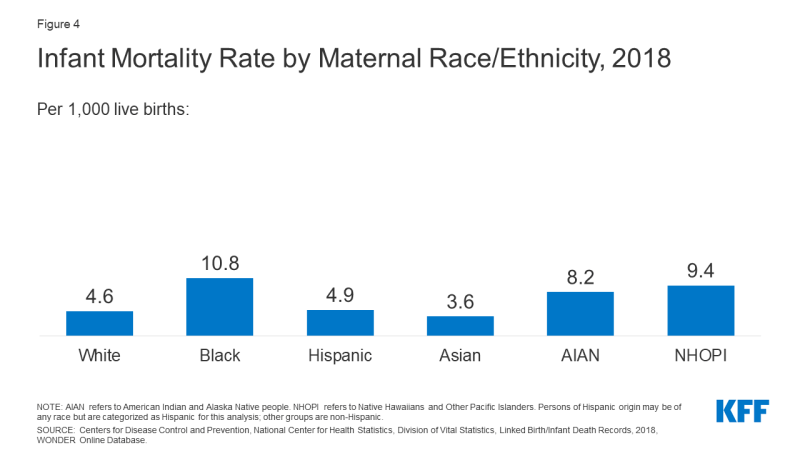 The factors driving disparities in maternal and infant health are complex and multifactorial. They include differences in health insurance coverage and access to care. However, broader social and economic factors and structural and systemic racism and discrimination, also play a major role in shaping health and disparities in health (Figure 5). In maternal and infant health specifically, the intersection of race, gender, poverty, and other social factors shapes individuals’ experiences and outcome. Recently there has been broader recognition of the principles of reproductive justice, which emphasize the role that the social determinants of health and other factors play in reproductive health for communities of color. Notably, Hispanic women and infants fare similarly to their White counterparts on many measures of maternal and infant health despite experiencing increased access barriers and social and economic challenges typically associated with poorer health outcomes. Research suggests that this finding, sometimes referred to as the Hispanic or Latino health paradox, in part, stems from variation in outcomes among subgroups of Hispanic people by origin, nativity, and race, with better outcomes for some groups, particularly recent immigrants to the U.S.18 However, the findings still are not fully understood. 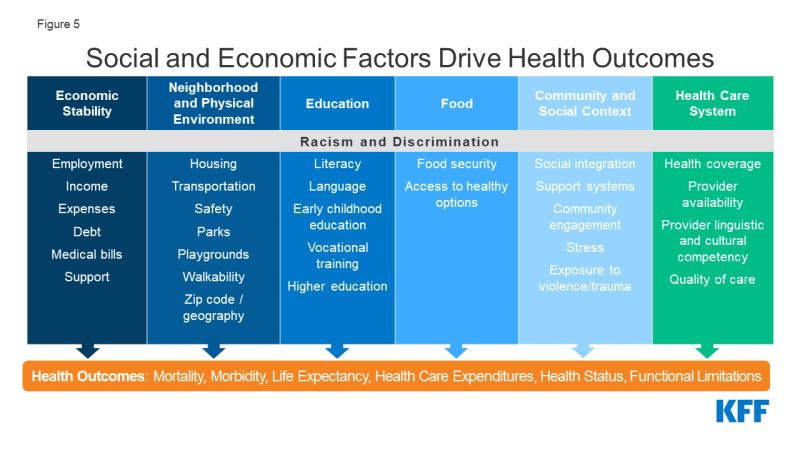 Disparities in maternal and infant health, in part, reflect increased barriers to care for people of color. Research shows that coverage before, during, and after pregnancy facilitates access to care that supports healthy pregnancies, as well as positive maternal and infant outcomes after childbirth. Overall, people of color are more likely to be uninsured and face other barriers to care. Medicaid helps to fill these coverage gaps during pregnancy and for children. However, women of color are at increased risk of being uninsured prior to their pregnancy and many lose coverage at the end of the 60-day Medicaid postpartum coverage period. Beyond health coverage, people of color face other increased barriers to care, including limited access to providers and hospitals and lack of access to culturally and linguistically appropriate care.19 These challenges may be particularly pronounced in rural and medically underserved areas. For example, research suggests that a rise in closures of hospitals and obstetric units in rural areas has a disproportionate impact in communities with larger shares of Black patients.20

Research also highlights the role historic and ongoing racism and discrimination play in driving racial disparities in maternal and infant health. Research has documented the impact of social determinants, racism, and chronic stress on maternal and infant health outcomes, including higher rates of perinatal depression and preterm birth among African American women and higher rates of mortality among Black infants.21, 22, 23 In recent years, research and news reports have raised attention to the effects of provider discrimination during pregnancy and delivery. News reporting and maternal mortality case reviews have called attention to a number of maternal deaths and near misses among women of color where providers did not or were slow to listen to patients. In one study, Indigenous, Hispanic, and Black women reported significantly higher rates of mistreatment (such as shouting and scolding, ignoring or refusing requests for help) during the course of their pregnancy.24 Even controlling for insurance status, income, age, and severity of conditions, people of color are less likely to receive routine medical procedures and experience a lower quality of care.25 One recent study of hospital births in Florida found that there were significant improvements in mortality for Black newborns who were cared for by Black physicians, pointing to the importance of culturally competent care.26 A recent KFF/The Undefeated survey also found that most Black adults believe the health care system treats people unfairly based on their race, and one in five Black and Hispanic adults report they were personally treated unfairly because of their race or ethnicity while getting health care in the past year, with a higher share of Black mothers reporting unfair treatment. Black adults also were more likely than White adults to report feeling a provider didn’t believe they were telling the truth and being refused a test, treatment, or pain medication they thought they needed.

Together these data show that racial disparities in maternal and infant health persist. Improving maternal and infant health is key for preventing unnecessary illness and death and advancing overall population health. Recent research finds that as many as 60% of all maternal deaths in the U.S. are preventable and that increasing access to preconception, prenatal, and interconception care can reduce pregnancy-related complications.27 Healthy People 2030, which provides 10-year national health objectives, identifies the prevention of pregnancy complications and maternal deaths and improvement of women’s health before, during, and after pregnancy as a public health goal.

Reducing rates of disparities in preterm birth and low birthweight and eliminating racial disparities in these measures have been the focus of a national and local initiatives from clinicians and policymakers. Growing recognition of disparities has prompted efforts from clinical groups and public health officials to become more informed about and address their biases, practice shared decision making, and listen to and act upon the concerns of pregnant and postpartum patients particularly in urgent situations. In addition, a number of initiatives are underway through Medicaid to improve maternal and infant health and reduce disparities given the substantial role the program plays in covering low-income children and pregnant women and, particularly, low-income children and pregnant women of color.

Looking ahead, the COVID-19 pandemic further highlights the urgency and importance of addressing disparities health more broadly and brought new attention to those disparities in maternal and infant health specifically. Data show that people of color are bearing a disproportionate burden of COVID-19 cases, hospitalizations, and deaths, and may face increased barriers to access testing. People of color also are facing significant economic impacts as a result of the pandemic, and are more likely than White people to report trouble affording food, housing, utilities, credit card bills, or health care expenses due to COVID-19. The disproportionate toll of the pandemic on communities of color has reportedly prompted more interest among pregnant people, particularly people of color, to consider births outside of the hospital. While much remains unknown about the full impact of COVID-19 on pregnant women and their children, the CDC is collecting and publishing weekly pregnancy data to better understand COVID-19 during pregnancy. Research studies are also examining the impact of the COVID pandemic on pregnancy with a focus on people of color. Overall, prioritizing equity in pandemic relief and response efforts and in health more broadly will be key to preventing the widening of disparities going forward and supporting progress in advancing maternal and infant health.