Number of Plans Available to Beneficiaries. For 2021, the average Medicare beneficiary has access to 33 Medicare Advantage plans, the largest number of options available in the last decade (Figure 1). 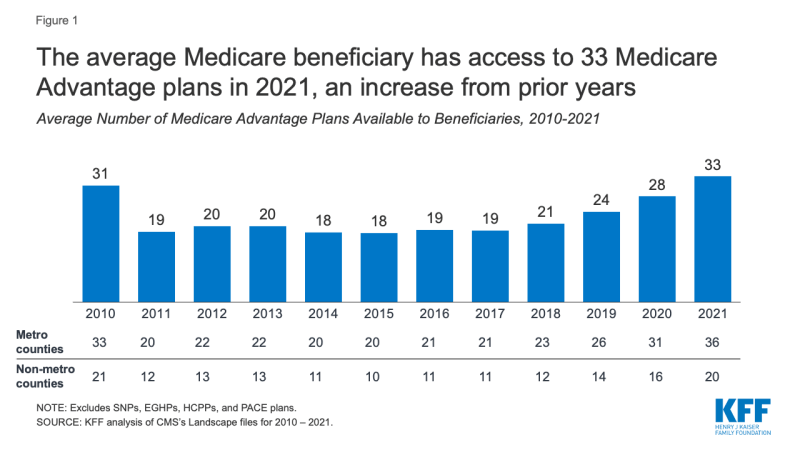 Figure 1: The average Medicare beneficiary has access to 33 Medicare Advantage plans in 2021, an increase from prior years

Among the 33 Medicare Advantage plans generally available for individual enrollment to the average Medicare beneficiary, 27 of the plans include prescription drug coverage (MA-PDs). These numbers exclude employer or union-sponsored group plans, Special Needs Plans (SNPs) and PACE plans, which are only available to select populations.

As in prior years, HMOs continue to account for about two-thirds (62%) of all plans offered in 2021. The availability of local PPOs has increased rapidly over recent years. In 2021, one-third of plans offered are local PPOs, compared to a quarter in 2018. Between 2020 and 2021, the number of regional PPOs has remained constant, while the number of private fee-for-service plans has continued to decline.

The growth in number of plans varies across states and counties, with the preponderance of the growth occurring in Florida and California (41 more and 30 more plans, respectively; data not shown). Virginia has 6 fewer plans available for 2021 than in 2020, while South Carolina has 3 fewer plans, and Maryland and Nebraska each have one fewer plan available in 2021 than in 2020.

While many employers and unions also offer Medicare Advantage plans to their retirees, no information about these 2021 plan offerings is made available by CMS to the public during the Medicare open enrollment period because these plans are not available to the general Medicare population.

.
The rise in SNPs for people who require an institutional-level of care (I-SNPs) has been particularly notable, more than doubling from 83 plans in 2017 to 174 plans in 2021. I-SNPs may be attractive to insurers because they tend to have much lower marketing costs than other plan types since they are often the only available option for people to receive their Medicare benefits in certain retirement communities and nursing homes. The number of SNPs for people dually eligible for Medicare and Medicaid (D-SNPs) has also increased sharply over the past five years, rising from 373 dual SNPs in 2017 to 598 dual SNPs in 2021, a 60% increase, suggesting insurers’ continue to be interested in managing the care of this high-need population.

The average Medicare beneficiary is able to choose from plans offered by 8 firms in 2021, one more than in 2020 (Figure 5). Despite most beneficiaries having access to plans operated by several different firms, enrollment is concentrated in plans operated by UnitedHealthcare, Humana, and Blue Cross Blue Shield affiliates. 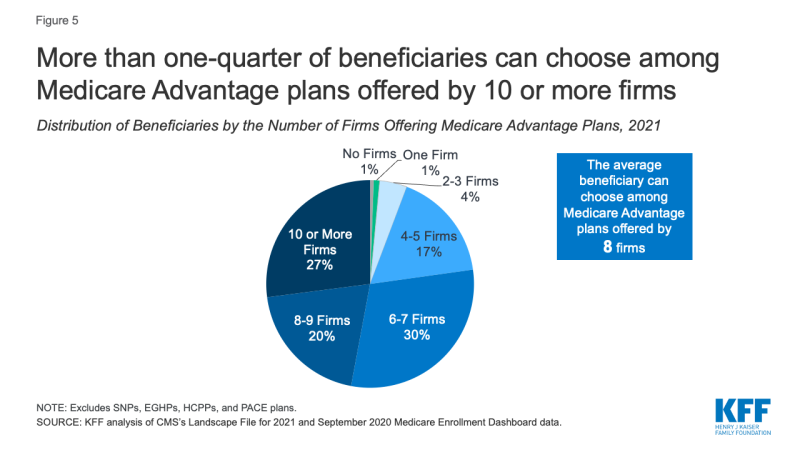 Figure 5: More than one-quarter of beneficiaries can choose among Medicare Advantage plans offered by 10 or more firms

Six firms that previously participated in the Medicare Advantage market are not offering plans in 2021. Two of the firms (ApexHealth, Inc. and Clarion Health) offered plans for the first time in 2020, but did not appear to enroll any participants. The other four firms had very low enrollment in 2020. Three of the six exiting firms offered plans in New York.

In 2020, 60 percent of enrollees in MA-PD plans pay no premium other than the Medicare Part B premium of $144.60 per month. Based on enrollment in March 2020, nearly one in five enrollees (18%) pay at least $50 a month, and 6 percent pay $100 or more. CMS announced that the average monthly plan premium among all Medicare Advantage enrollees in 2021, including those who pay no premium for their Medicare Advantage plan, is expected to decrease 11 percent from 2020 to $21 a month. CMS does not disclose the methods or assumptions used in deriving their calculations, but since most Medicare Advantage enrollees pay no additional premium, the average they report is heavily influenced by zero-premium plans, and does not reflect the average premium paid by those who are in plans with an additional premium.

Beginning in 2020, Medicare Advantage plans have also been able to offer extra benefits that are not primarily health related for chronically ill beneficiaries, known as Special Supplemental Benefits for the Chronically Ill (SSBCI). Information on the availability of SSBCI for 2021 has not yet been published by CMS, but may include services such as pest control, food and produce (beyond a limited basis), and non-medical transportation. Since plans are permitted to offer these benefits non-uniformly to enrollees, it will be important to examine how these benefits are distributed across subgroups of enrollees.

Availability of Extra Benefits in Plans for General Enrollment. Historically, the most offered extra benefits were fitness, dental, vision, and hearing; nearly two-thirds of plans (68%) provide all four of these benefits for 2021. Though these benefits are widely available, the scope of specific services varies. For example, a dental benefit may include cleanings only or more comprehensive coverage. As of 2020, Medicare Advantage plans have also been allowed to offer more telehealth benefits than traditional Medicare (though Medicare has temporarily expanded these benefits during the pandemic). The vast majority (98%) of Medicare Advantage plans are offering telehealth in 2021 (up from 91% in 2020) (Figure 7). 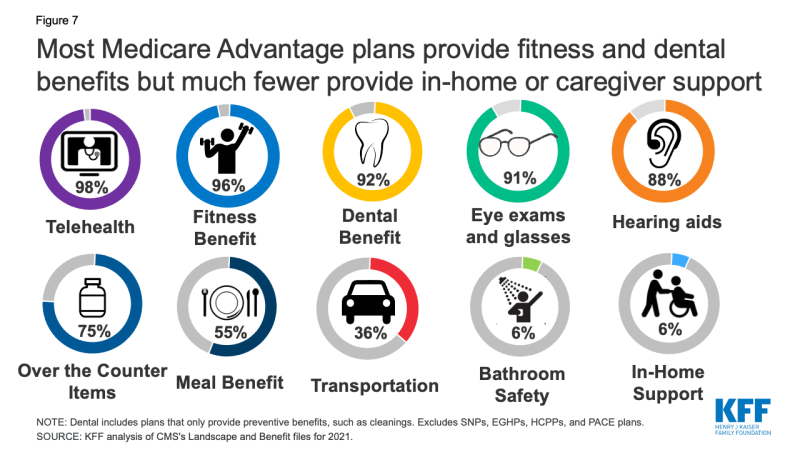 Other extra benefits that are frequently offered for 2021 include over the counter items (75%), meal benefits, such as a cooking class, nutrition education, or meal delivery (55%), and transportation benefits (36%).

Availability of Extra Benefits in Special Needs Plans. SNPs are designed to serve a disproportionately high-need population, and a somewhat larger percentage of SNPs than plans for other Medicare beneficiaries provide their enrollees with over the counter items (91%), transportation benefits (85%) and meal benefits (63%). Similar to plans available for general enrollment, a relatively small share of SNPs provide bathroom safety devices (11%) or in-home support (18%).

Access to Extra Benefits. Virtually all Medicare beneficiaries live in a county where at least one Medicare Advantage plan available for general enrollment has some extra benefits not covered by traditional Medicare, with 98% having access to some dental, fitness, vision, and hearing benefits for 2021. The vast majority of beneficiaries also have access to telehealth benefits (99%), over the counter items (99%), transportation assistance (95%) and a meal benefit (98%), but far fewer have access to bathroom safety (55%) or in-home support (62%).