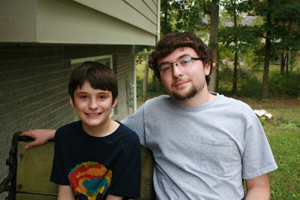 Teenager overcame deficits in social interaction skills due to autism with the help of Medicaid HCBS, while waiting lists and an interstate move have delayed services for his brother.

Aubrey and Oscar are brothers who are both diagnosed with autism. They lived together with their parents in Georgia until their father’s job was transferred to Kansas in 2008. Both boys were receiving Medicaid HCBS in Georgia at that time, and because Aubrey was doing so well, the family decided to have him remain in Georgia, living with a relative, so he could continue to receive services and avoid the Medicaid HCBS waiver waiting list in Kansas. Although this meant that the family had to be separated, which was a hardship, Aubrey’s mother Angelina says that Aubrey “blossomed” socially as a result of the services he received. Medicaid HCBS provided Aubrey with opportunities to model typical peers and learn social and independent living skills. Aubrey also received eight hours of respite care per month through the waiver, which Angelina believes helped to keep her marriage intact as a result of the stresses associated with caring for children with disabilities. Aubrey improved to the point that he no longer qualified for special education services by the time he was a high school senior, and he is now in college majoring in mechanical drafting.

My two sons are very similar in terms of their functional abilities… Aubrey’s progress has been fantastic as a result of the services he received, while Oscar has languished on the waiting list…”
-Aubrey and Oscar’s mother, Angelina

Due to his young age, Oscar moved with his parents to Kansas, where his mother says he waited 4 ½ years for HCBS. As a result, Oscar has not had as many opportunities to develop social interaction skills, and the family has not had respite care, which has been stressful. Angelina also believes that Oscar could benefit from anger management therapy because he has not yet learned how to self-regulate his emotions.

Recently, the boys’ father lost his job, and the family returned to Georgia, where Oscar must start over again at the bottom of the HCBS waiver waiting list. Oscar has not yet been able to get onto the list because the family must provide a letter from a doctor in Georgia for his application to be considered complete. However, Angelina is unable to take Oscar to a doctor in Georgia until his application for Medicaid state plan services is approved, which can take up to 45 days. Angelina says that families of children with disabilities should be prepared to wait multiple years for services and worries that Aubrey and Oscar will have very different outcomes due to the different amount of services they each have received.