Medicaid is an important source of health insurance for seniors and people with disabilities.  In addition to covering a variety of medical care, such as doctor visits, behavioral health services, and prescription drugs, Medicaid also is the primary payer for long-term services and supports (LTSS), including nursing facility care and home and community-based services (HCBS) (Figure 1).1   HCBS provide assistance with activities of daily living (such as eating, bathing, and dressing) and instrumental activities of daily living (such as preparing meals and housecleaning) for people with physical or cognitive functional limitations that result from age or disability.  HCBS include a range of benefits, such as residential services, adult day health care programs, home health aide services, personal care services, and case management services, among others.2  HCBS may be delivered through a self-directed service model in which beneficiaries select, train, and dismiss their providers and/or control the allocation of funds among particular services in their individual budgets.3 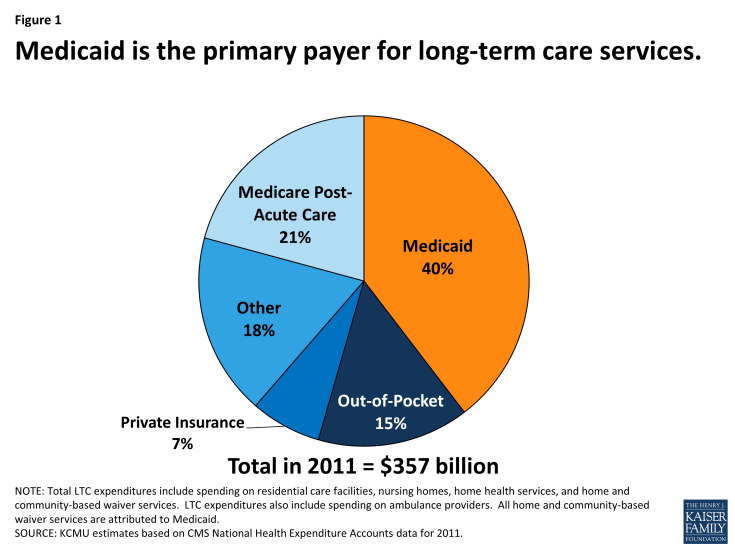 Figure 1: Medicaid is the primary payer for long-term care services

To provide insight into the unique experiences of Medicaid beneficiaries who need HCBS, this report profiles nine seniors and people with disabilities residing in Florida, Georgia, Kansas, Louisiana, North Carolina, and Tennessee.4  They include people with a range of developmental disabilities, such as autism and intellectual disabilities; physical disabilities, such as cerebral palsy and multiple sclerosis; multiple chronic health conditions; Alzheimer’s disease and aging-related dementia, and physical functional limitations associated with the aging process.  Based on a series of telephone interviews conducted in 2013 by the Kaiser Commission on Medicaid and the Uninsured, these profiles illustrate how beneficiaries’ finances, employment status, relationships, well-being, independence, and ability to interact with the communities in which they live – in addition to their health care – are affected by their Medicaid coverage and the essential role of HCBS in their daily lives.  We extend our appreciation to the beneficiaries and their families who so generously took the time to share their stories.

Nearly 3.2 million people received Medicaid HCBS in 2010, with expenditures totaling $52.7 billion.5  Historically, the Medicaid program has had a structural bias toward institutional care because state Medicaid programs must cover nursing facility services, whereas most HCBS are provided at state option.6  While states can choose to offer HCBS as Medicaid state plan benefits, the majority of HCBS are provided through waivers.7  Unlike Medicaid state plan benefits, which must be available to all beneficiaries as medically necessary, waiver enrollment can be capped, resulting in waiting lists when the number of people seeking services exceeds the amount of available funding.   In 2012, nearly 524,000 people were on HCBS wavier waiting lists nationally, with the average waiting time exceeding two years; waiting lists vary both across states and within states among waiver target populations.8

Over the last several decades, states have been working to rebalance their long-term care systems by devoting a greater proportion of spending to HCBS instead of institutional care.  These efforts are driven by beneficiary preferences for HCBS, the increased population of seniors and people with disabilities who need HCBS, and the fact that HCBS typically are less expensive than comparable institutional care.  The U.S. Supreme Court’s 1999 Olmstead decision, finding that the unjustified institutionalization of people with disabilities violates the Americans with Disabilities Act, also has heightened the state and federal focus on community integration efforts.9  While the majority of Medicaid LTSS spending still goes toward institutional care, the proportion of Medicaid LTSS spending on HCBS continues to increase relative to spending on institutional services.  In FY 2011, HCBS accounted for 45 percent of total Medicaid LTSS spending nationally, up from 32 percent in FY 2002 (Figure 2). 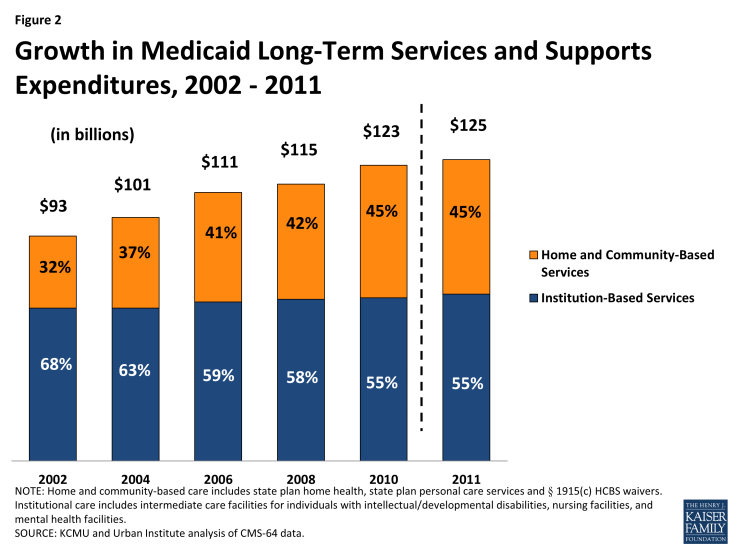 The nine Medicaid beneficiaries profiled in this report illustrate the diversity of medical conditions, personal circumstances, and needs for services and supports among seniors and people with disabilities who rely on HCBS.  At the same time, their stories suggest some common themes underlying the important role of Medicaid HCBS in their lives:

The stories presented in this report illustrate the time, energy, dedication, and patience required to obtain and coordinate the services necessary to ensure independent safe community living for seniors and people with disabilities.  As a result of their experiences accessing HCBS, these individuals offer concrete ideas about how the system can be improved for others, such as:

Despite some challenges, these stories confirm the essential role of Medicaid HCBS in improving beneficiaries’ daily lives by providing the physical and social functional supports necessary to access and benefit from community living.  As these profiles make clear, seniors and people with disabilities have unique contributions to offer the communities in which they live, and Medicaid HCBS facilitate their integration into community life.  For the beneficiaries profiled in this report and the many others who receive HCBS, Medicaid is a true safety net as it is often the only available source of these essential services to support community living.