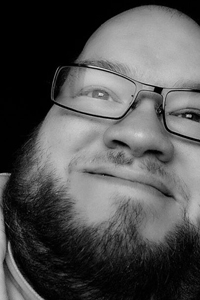 Nicholas was diagnosed with multiple sclerosis (MS) at age 29, and the disease is advancing. He uses a motorized wheelchair and cannot walk more than a few feet. His hearing and vision are impaired, and he wears hearing aids. He also has difficulty using his hands and holding things. He receives a monthly drug infusion that reduces some symptoms. He recently developed a new symptom, trigeminal neuralgia (a nerve condition that causes intense facial pain), which he describes as “blindingly painful,” and for which he is taking a new medication. Nicholas says that he is in “a lot of pain” daily and has been “dealing with pain forever” as a result of MS.

Nicholas’s mother provides a lot of his care. She helps him with getting into bed, administering his medications, and putting lotion on his legs. She also does his laundry, cooking, and grocery shopping, and provides his transportation.

I would have waited as long as it took to get services.”
-Nicholas, age 33

Nicholas lives in an apartment with his mother that is physically inaccessible. His wheelchair does not fit through the bathroom doorway so he must transition out of his wheelchair to enter the bathroom, and the shower also is inaccessible. In September 2013, Nicholas had to go to the emergency room after he fell while home alone and trying to transfer from the bathroom to his wheelchair. His leg bent the wrong way, and he became wedged against the wall. He was screaming for help, but none of his neighbors was home at the time. His mother found him when she returned. He did not break any bones but says he had a long painful recovery.

Nicholas recently learned that he is about to start receiving Medicaid home and community-based waiver services. Nicholas already receives Medicaid state plan benefits, which cover his medications, doctor visits, and power wheelchair. He expects that the waiver will offer additional services, such as making his shower accessible, maintaining his power wheelchair, providing home-delivered meals, and supplying a car hook-up for his power wheelchair so that he can go out more easily in the community. Currently, he has a manual wheelchair that fits into his mother’s car but which is difficult for him to use as he needs someone to push him. As a result, he only goes where he “really need[s] to go,” such as doctor appointments.

Nicholas found out about the waiver from a friend and some internet research. When he learned that enrollment was capped, he initially decided to “set it aside.” Then, his therapist explained that there is a waiting list. Nicholas was on the waiting list about seven months. He was told that the wait might be a year or more so he was “excited” that the list moved more quickly. He is happy with his waiver case plan and hopes that the waiver will “clue [him] in to other services that may be available.”