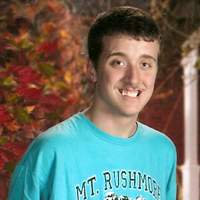 Curtis lives with his mother and legal guardian, Rhonda. He is diagnosed with autism, intellectual disabilities, and sensory integration issues. Curtis functions on the level of a 2nd to 3rd grader and has recently started to read. While he has a very easy-going personality, he cannot be left alone and needs help with shaving, bathing, and taking medication.

Curtis started receiving attendant care services through a Medicaid HCBS waiver about two years ago. His attendant accompanies him to the library, to get his hair cut, to community events, and to the book store where his favorite activity is looking at picture books. His attendant also helps him with basic life skills at home, such as making his bed and dusting his room. Rhonda locates, trains, and schedules Curtis’ attendants.

There is a desperate need for services for adolescents so that they can develop independent living skills in age-appropriate settings with peers.”
-Curtis’ mother, Rhonda

Rhonda says that attendant care services have enabled Curtis to interact with the community in an age-appropriate way as a young adult. She believes that receiving services earlier during adolescence would have helped Curtis develop greater independence at that time with getting his own breakfast or an after-school snack and getting on and off the school bus. Curtis was on the Medicaid HCBS waiver waiting list for 12 years, from ages six to 18, when Rhonda says they were in “desperate need” of services. As a single parent, Rhonda was able to work only because she found childcare providers who would supervise Curtis when he was a teenager; however, this arrangement meant that Curtis was with infants at a childcare center rather than in an age-appropriate setting with peers. Rhonda paid out-of-pocket about $50 per week for before- and after-school care and whenever she needed to go to an appointment or meeting by herself. Rhonda says that respite care at $25 per hour was unaffordable for her.

Looking ahead, Rhonda says that Curtis wants to continue to live with her, but eventually he will have to transition to a residential placement because she “will not live forever,” and he needs constant supervision. She hopes that he can move into a group home around age 25. She also would like him to attend a day program after he finishes high school at age 21, although that involves another waiting list. Rhonda describes the waiting list system as “confusing” and “a lot of work to orchestrate.” She found it difficult to learn how to get Curtis’ name onto the HCBS waiver waiting list and was frustrated during the wait because “no one can tell you where you are on the list.” Rhonda suggests that the system could be improved if people could look up their place on the list on a website while they are waiting for services.