Over time, the clinical context of family planning has evolved to include a broader array of services, such as health education and promotion, testing and treatment for sexually transmitted infections, and services that facilitate fertility preservation.2 These services are classified as “related family planning services” and also qualify for a 90% federal match if they are provided in the context of a visit to obtain family planning services (often synonymous with contraceptive care).  Today, state Medicaid family planning programs may be limited to only those services that directly prevent or delay pregnancy or they may include additional benefits that facilitate reproductive decision-making or fertility preservation.  For example, while all states cover prescription contraceptives under the family planning benefit, some states also pay for over-the-counter supplies and drugs, counseling, and STI screening and treatment.3  While state Medicaid programs make determinations about the services that they will cover, for many women, particularly those enrolled in capitated managed care arrangements (discussed further in this brief), coverage policies are established through the contracts that plans sign with the state program.  In addition, plans can use medical management techniques to limit or exclude specific benefits by using prior authorization requirements, concurrent review, or similar practice.  This allows a plan or issuer to determine the frequency, method, treatment, or setting for the provision of a particular health service.  For example, in the case of contraception, providers or a Medicaid program can rely on generics or direct patients to first try less expensive methods before moving on to more costly methods that may be more effective.

Most Medicaid programs pay for sterilization services.  Federal law requires that Medicaid programs impose a 30-day waiting period between the time a woman signs a consent form for sterilization and the time when the procedure may be performed. This policy is a response to coercive practices used to sterilize certain groups of women–particularly those with mental illness and women of color–during the 1970s and earlier in the 20th century.  This policy was put in place to assure that women have had time to thoroughly weigh their options prior to consenting to this permanent decision.  While serving as an important protection to women, the waiting period policy has also, in some cases, impeded access to sterilization, particularly for women seeking to have the procedure done during the post-partum hospital stay.4

In April 2014, the Office of Population Affairs (OPA) and the Centers for Disease Control and Prevention (CDC) issued the report, Providing Quality Family Planning Services (QFP), the first joint agency recommendations targeted for service providers outlining the elements of high quality family planning care.  The recommendations identify and define a core set of family planning services for women and men; describe how to provide services; and encourage the integration of a family planning visit with preventive services.  The OPA and CDC recommend that core family planning care include services to prevent pregnancy and space births.  One of the most important developments in this framework was the attempt to direct women to the most effective and appropriate contraceptive methods.   In addition, the core family planning services also include the provision of pregnancy testing and counseling, basic infertility services, STI and HIV services, and other preconception services such as screening for obesity, smoking, and mental illness.5  While these services are recommended as elements of high quality family planning care there is no requirement that all state Medicaid programs offer them to their beneficiaries.  In 2013, however, women with Medicaid coverage were more likely than women with private insurance to report they had spoken with a provider about sexual history, HIV and intimate partner violence (Figure 2).6 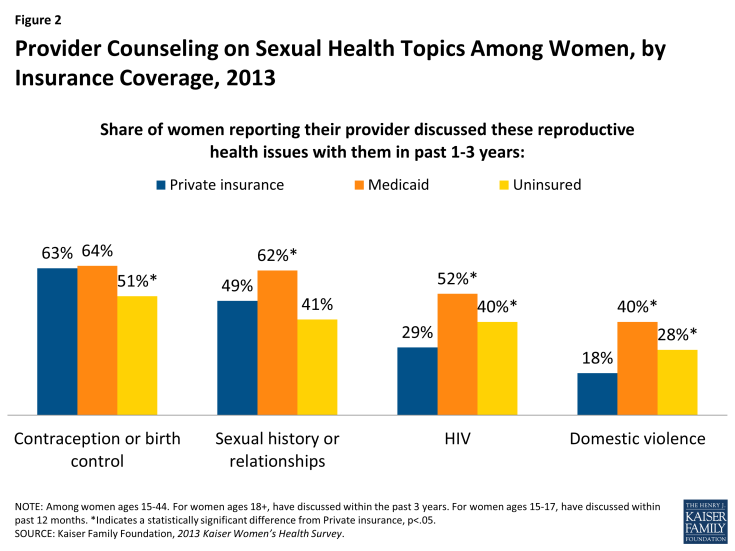 Women receive their sexual and reproductive health care from a range of providers, including private physicians, federally qualified health centers, family planning clinics, health departments and other clinics.  According to the Kaiser Women’s Health Survey,11 women with Medicaid coverage and uninsured women are more likely to rely on community health centers and family planning clinics, than those with private insurance (Figure 3).  However, office-based physicians or HMOs are still the leading sites of gynecologic care for women.  About eight in ten women of reproductive age with private insurance (84%) receive gynecologic care at a doctor’s office or HMO, compared to about half of women with Medicaid coverage (57%) and uninsured women (53%). 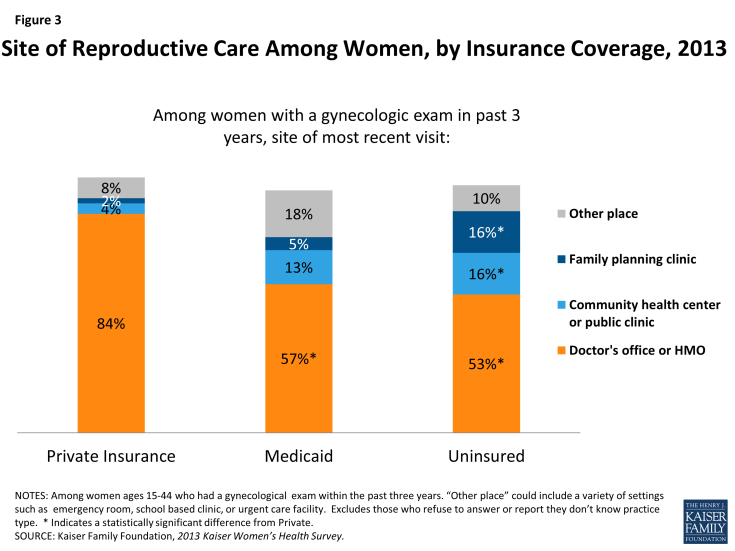 Figure 3: Site of Reproductive Care Among Women, by Insurance Coverage, 2013

In their efforts to expand access to providers, coordinate care, and control spending, many state Medicaid programs have turned to managed care delivery systems to provide care.  These arrangements can be broadly organized into either fully capitated networks of limited providers or more loosely structured primary care case management systems where a primary care provider is a gatekeeper to care.  Today the vast majority (77%) of reproductive age women receiving full scope Medicaid coverage are enrolled in some type of managed care arrangements (Figure 4).   This ranges from no women in managed care in Alaska, New Hampshire, Oklahoma, and Wyoming to 13% in Mississippi to most women in this age group in Tennessee, Hawaii, Delaware, and Maryland (Appendix 2).12 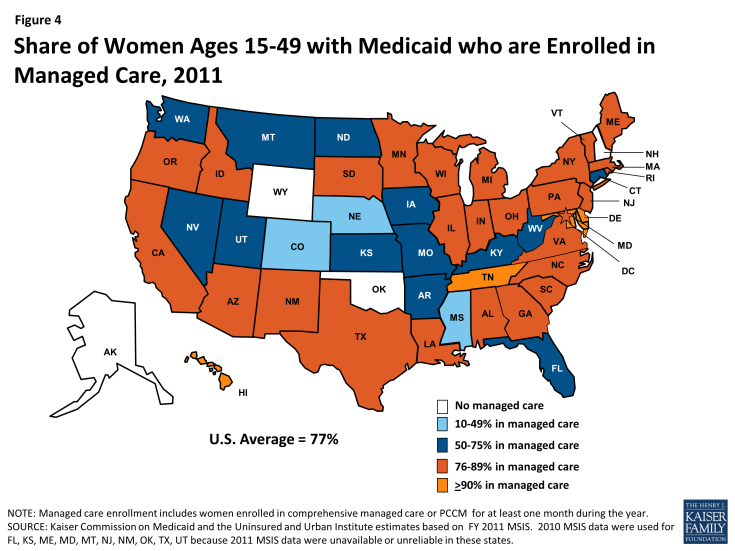 Many states require Medicaid beneficiaries to enroll in managed care and receive services from a defined network of providers, but a few states allow women to choose to between a managed care plan or a fee for service system.  In cases where managed care enrollment is mandatory, women enrolled in these plans may seek family planning care from the provider of their choice – even if they are outside the plan network — as long as the provider participates in the Medicaid program in their state.  However, implementation of this federal “freedom of choice” provision13 has been challenging for patients, providers and health plans.  Medicaid beneficiaries are often unaware that they have a choice of family planning provider and there is no clear standard about who (health plan or the state) is responsible for informing them about their provider options.  Providers and health plans often have had difficulty negotiating and setting appropriate reimbursement for family planning services.  This is particularly challenging to implement for those enrolled in fully capitated networks where provider payments are bundled and/or provided in advance, making reimbursement to out-of-network providers more complicated.

Over 20 years ago, states began establishing special demonstration programs that allowed them to offer Medicaid eligibility for a limited scope of services or to a specific population.  For several years, these narrow scope programs were established as Section 1115 waivers, time-limited research demonstration projects that had to be approved by the Centers for Medicare and Medicaid Services (CMS) to give states the flexibility to waive certain Medicaid rules so they can design new systems to expand and improve their Medicaid programs.  Several states have used waivers to provide coverage for family planning services only to women and men who do not qualify for full Medicaid benefits.  Federal rules required that the programs must be budget neutral, meaning that they may not cost the federal government any more than they would have otherwise paid the state absent the change.  They also required that the effectiveness of the change be evaluated.

Initially, family planning waiver programs extended coverage for family planning services to women who no longer qualified for Medicaid due to changes in income or because they were no longer eligible for maternity coverage.   Other states opted to extend coverage to low-income women of reproductive age, regardless of their prior Medicaid eligibility status.  In 2011, at least 3.5 million women ages 15 to 49 obtained Medicaid-covered family planning services through family planning waivers.14  While the waiver system was instrumental in expanding access to family planning services, states were required to renew them every five years, which posed a significant financial and administrative burden on states.  As “research and demonstration” programs, the waivers have been subject to rigorous evaluation and have proven cost-effective and successful in improving public health outcomes.15,16, 17  In the more than 20 years that states have been operating these program, they have moved out of the realm of demonstration projects and are now functioning as safety net family planning programs in many states, particularly in California which has the nation’s largest enrollment.

Recognizing the importance of these programs and the administrative challenges that states faced in initiating and renewing their waivers, the ACA included a provision that enabled states to establish family planning expansion programs by permanently amending their Medicaid state plans, known as a State Plan Amendment (SPA) without the need for federal renewal.  In response, many states have converted their waiver programs to SPAs rather then seeking renewal of their waivers and others have newly decided to establish SPAs to broaden access to family planning services for low-income women.  Today, more than half of states have established programs that extended Medicaid eligibility for family planning services to people who would not otherwise qualify for Medicaid, and as of January 2016, 14 states have adopted family planning SPAs (Appendix 3). Income-based eligibility is the only approach used in SPAs.

California’s Family Planning, Access, Care, and Treatment (Family PACT) Program was originally established by the California legislature in 1996 and funded through the California State General Fund. When the state transitioned the program to a Section 1115 Demonstration Waiver, the state received federal matching funds from the Centers for Medicare and Medicaid Services (CMS). In 2011, after the passage of the Affordable Care Act (ACA) created the SPA option, California incorporated the Family PACT Program into its Medicaid program. Family PACT is by far the largest family planning expansion program in the nation, serving 1.83 million men and women in Fiscal Year 2011-2012.   The program provides a variety of services, including contraceptives, counseling, and STI testing to women and men, it also provides mammograms to women 40 and older.  It is estimated that over half (54%) of women ages 15-44 in need of publicly funded contraceptive services received these services through Family PACT in FY 2011-12.18  In 2009, the Family PACT program was estimated to have averted approximately 200,041 unintended pregnancies.  The state also estimated that each unintended pregnancy averted saved the public sector approximately $5,469 in medical, welfare, and other social service costs for the woman and their child.  Over five years, Family PACT saved the public sector approximately $14,111 per averted pregnancy, for a total of nearly $4.08 billion in savings.19