In 2010, the ACA paved the way for the biggest Medicaid policy changes since the program’s inception in 1965. The ACA allows states to broaden Medicaid eligibility, creating a foundation of coverage for nearly all low-income Americans with incomes up to 138 percent of the federal poverty level (FPL) ($11,770 per year for an individual in 2015).  Prior to the ACA, women could qualify for Medicaid only if their incomes were very low and they belonged to one of Medicaid’s categories of eligibility – pregnant, parent, senior, or disability.  Many low-income women would qualify only after becoming pregnant.  With the ACA’s elimination of the categorical eligibility, low-income women who are not pregnant nor have children could qualify for Medicaid coverage.  The 2012 Supreme Court ruling on the ACA, however, effectively made this Medicaid expansion optional for states, resulting in inconsistent coverage policies across the nation. As of January 2016, 31 states plus DC have expanded eligibility for Medicaid, while the remaining 19 states are not moving forward with the ACA Medicaid expansion at this time.1

Of the 10 million women ages 15 to 49 who were uninsured during 2014, it is estimated that about 4.7 million qualify for either Medicaid or ACA marketplace subsidies and could gain coverage as the ACA becomes fully implemented in the coming years. An additional 1.1 million women with incomes below the federal poverty level have no pathway to affordable coverage, however, because they live in a state that is not expanding Medicaid.  It is likely that there are at least an additional 1.9 million women of childbearing age who will remain ineligible for Medicaid or marketplace participation due to their immigration status (Figure 5).2 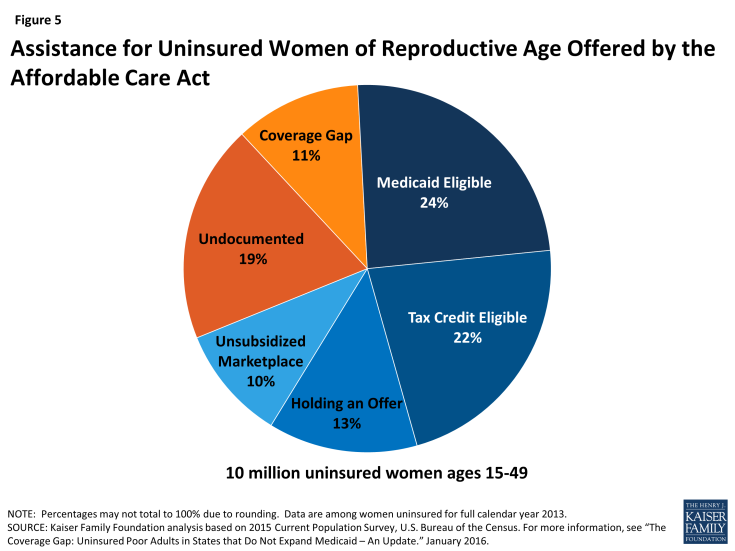 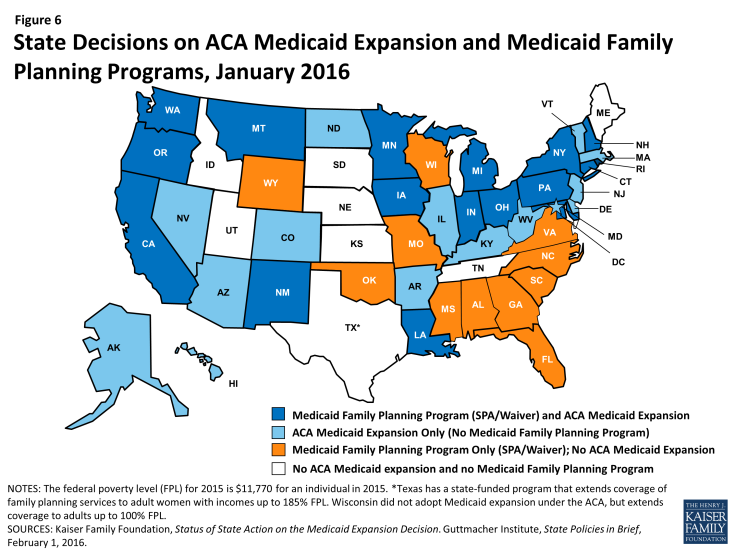 In the states that have not expanded their full scope Medicaid programs under the ACA, Medicaid family planning programs have the potential to play a significant role for low-income individuals, mostly women, who will not have a pathway to affordable coverage and will likely remain uninsured. For some low-income women living in these states, the Medicaid family planning programs will provide them with access to a limited set of health care services, including contraception and other preventive services. For the women living in the nine states that have chosen not to expand their full scope Medicaid programs and do not have Medicaid family planning expansion programs, safety net programs, charity care, and emergency departments will likely be their only sources of care.   In all states, however, there still will be a sizable minority of individuals who remain uninsured for a variety of reasons, including immigration status and the absence of affordable coverage options.  These women will also depend on the services of safety-net providers for care.

Colorado has adopted the ACA Medicaid expansion for low-income residents up to 138% FPL.  Colorado, however, does not have a separate family planning expansion program.  The state is large and geographically diverse, with populations in need of subsidized family planning services located both in dense urban centers and remote rural areas. Approximately one in four women living in the state have incomes below 150% of the federal poverty level and more than half of these are below the age of 25.  In 2008, prior to the passage of the ACA, the state created the Colorado Family Planning Initiative (CFPI).  This program is separate from Medicaid and was designed to increase access to family planning and long-acting reversible contraceptives (LARC) in particular, for low-income, uninsured women in the state, including those who might not have qualified for Medicaid prior to the ACA expansion.4  Using a combination of significant private donations and public Title X funds, the state invested in provider infrastructure, patient education and outreach and coverage for effective (but expensive) long-acting reversible contraceptives.  Despite its success, the future of this program is not secure, as the state is currently debating whether to use state funds to continue the CFPI.  In 2010, the Colorado Department of Public Health chose reduction in unintended pregnancy as a “winnable battle” and identified this as one of the prevention division’s top two priorities.  The state’s efforts have paid off according to the Department of Public Health, which credits the family planning program with prevention of 27,000 unintended pregnancies annually.5

Preventive services now are defined to include all of the 18 FDA approved contraceptive methods, as prescribed, as well as all of the services recommended by the federally commissioned U.S. Preventive Services Task Force, which include counseling on STIs and HIV and screening for breast and cervical cancers.  However, this may vary from what is covered for women who would have been eligible for either full scope Medicaid or a Medicaid family planning program prior to the ACA expansions (Appendix 4).  This is because the package of services that states may offer through their traditional full scope Medicaid program and through Medicaid family planning programs are not required to comply with the ABP.   Some states may not cover all FDA approved contraceptives or all of the USPSTF services under those programs since there are no specific federal minimum requirements for traditional full scope Medicaid to do so.

Texas runs a state-funded program called the Women’s Health Program (WHP) that provides family planning services to women between 18 and 44 years of age with incomes up to 185% FPL who are not pregnant.    The WHP originated in 2007 as an 1115 Medicaid Family Planning Waiver Demonstration. Since its inception in 2007, the program has grown ten-fold from 9,300 enrolled women to 132,000 women at its peak in August 2011.   In 2011, the range of providers eligible to participate in the program plummeted when the Texas legislature directed the Health and Human Services Commission to establish the “Affiliate Ban Rule,” which prohibited organizations performing abortions, including all Planned Parenthood affiliated clinics, from participating in the WHP.  As a result, on March 15, 2012, CMS informed Texas that the state waiver would not be extended or renewed because the Affiliate Ban Rule” did not comply with CMS’ “freedom of choice” policy which permits Medicaid beneficiaries the option of getting their care from any participating Medicaid provider.  In order to maintain the WHP, Texas transitioned it from a federally and state funded Medicaid waiver demonstration to a  program funded with state-only funding and without any federal support or affiliation with Medicaid.   The program offers a limited scope of services, including counseling, certain screening services, and free contraceptives.  The number of family planning organizations funded by the Texas Department of State Health Services fell from 76 to 41 in the past two years and even some of the largest organizations continuing to receive funding have lost up to 75% of their budgets.7  It has been estimated that tens of thousands of low-income Texas women have lost access to family planning services and other women’s health services, possibly resulting in an increase in unplanned pregnancies around the state. 8