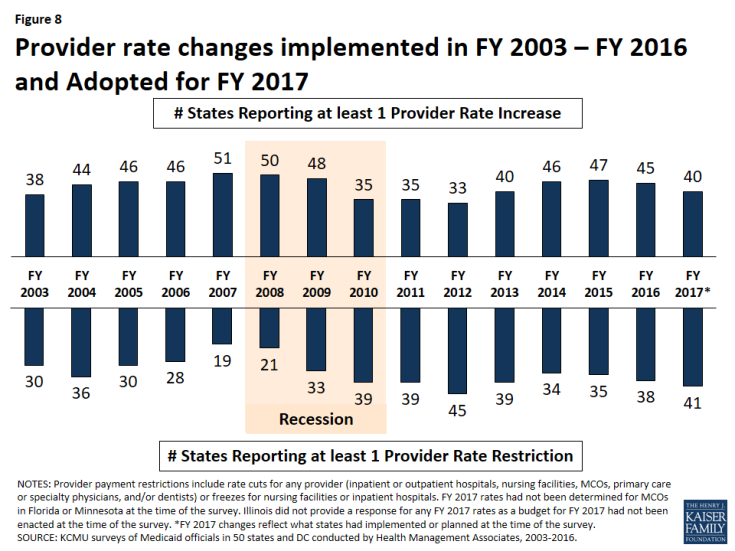 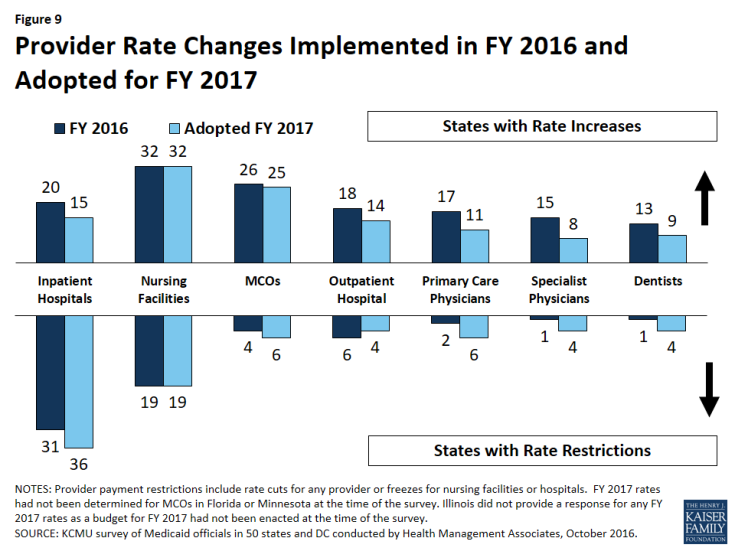 Capitation payments for Medicaid Managed Care Organizations (MCOs) are generally bolstered by the federal requirement that states pay actuarially sound rates. In FY 2016 and FY 2017, the majority of the 39 states with Medicaid MCOs implemented or planned increases in MCO rates. Four states reported MCO rate cuts in FY 2016, and six states plan to cut MCO rates in FY 2017. Several of these states also reported provider rate reductions in their FFS programs. Three states could not report MCO rate changes for FY 2017 because rate development was not complete. States are increasingly moving to calendar year MCO contracts. The effect of FFS rate restrictions for hospitals, physicians, and nursing facilities rates may have less of a direct impact on providers in states that rely heavily on managed care; however, even states with small FFS programs may use FFS rates as the base for setting MCO rates.

For calendar years 2013 and 2014, the ACA provided funding to increase Medicaid primary care physician (PCP) rates in all states to Medicare rates, with 100 percent federal funding of the rate differential. As a result, recent surveys did not ask about state-initiated Medicaid rates for primary care physicians. This year’s survey included FY 2016 and FY 2017 information about PCPs, specialist physicians, dentists, and outpatient hospital services. Rate increases are more prevalent than rate reductions for FY 2016 through FY 2017 for ambulatory Medicaid providers; however, fewer states adopted rate increases in FY 2017 compared to prior years.

As state Medicaid programs work to improve the quality of health care, increase beneficiary wellness, and reduce costs, one area of focus is a reduction in admissions and readmissions to hospitals that could have been prevented by the provision of appropriate care. States were asked if they had, or planned to implement, an inpatient hospital reimbursement incentive or penalty policy for potentially preventable readmissions in fee-for-service and managed care.

Some states reported specific policies related to MCO rates. For example, California adjusts MCO capitation rates to account for incidence of potentially preventable admissions compared to a benchmark for all MCOs. Ohio and Washington reported that capitation rates are based on reductions in potentially preventable readmissions similar to the FFS experience. New York indicated that their Value Based Purchasing model will adjust rates to plans who then can adjust rates to providers.

States were asked about reimbursement policies designed to reduce the number of early elective deliveries (EEDs). Nineteen (19) states indicated that they had a FFS policy in place in FY 2016 and one additional state plans to adopt such a policy in FY 2017. For example, states may not pay for any delivery prior to 39-weeks gestation that is the result of either a Cesarean section or induction, unless there is a documented medical reason for the early delivery. Other states pay for these services, but at a reduced rate, or include EEDs as a component of their hospital pay for performance metrics.

Twelve (12) states indicated that as of FY 2016 they required MCOs to have similar policies on EEDs. Two additional states will be implementing such policies in FY 2017. Absent a requirement by the state agency, states report that some MCOs have developed their own policies on EEDs or are following state fee-for-service policy. States are also implementing incentive programs that reward physicians for reducing the rate of early elective deliveries. Some MCOs may elect to have policies that are not directed by the state.

States reported a continued and increasing reliance on provider taxes and fees to provide a portion of the non-federal share of Medicaid costs continued or increased in FY 2016 and FY 2017. At the beginning of FY 2003, a total of 21 states had at least one provider tax in place. Over the next decade, a majority of states imposed new taxes or fees and increased existing tax rates and fees to raise revenue to support Medicaid. By FY 2013, all but one state (Alaska) had at least one provider tax or fee in place.2 In FY 2016, 34 states had three or more provider taxes in place (Figure 10). 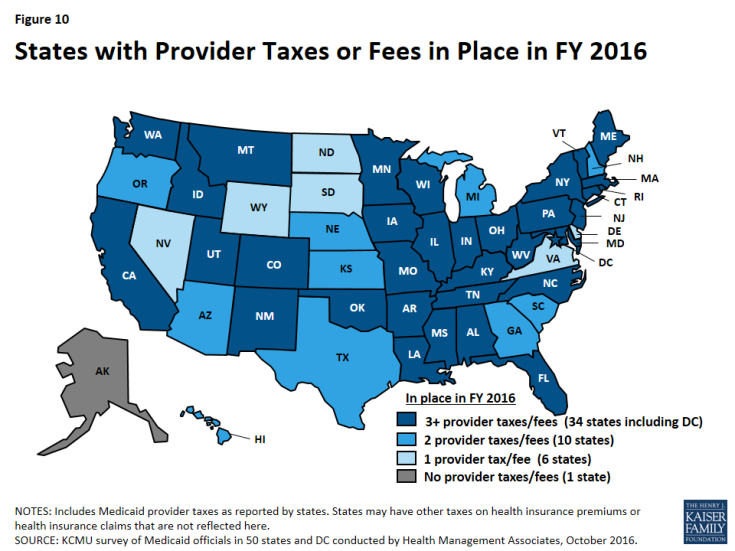 Figure 10: States with Provider Taxes or Fees in Place in FY 2016

States were asked whether in the future they planned to use increased provider taxes or fees to fund all or part of the costs of the ACA Medicaid expansion that will occur in calendar year 2017 and beyond when the 100 percent federal match rate for expansion costs starts to decline. Eight of the expansion states (Arkansas, Arizona, Colorado, Illinois, Indiana, Louisiana, New Hampshire, and Ohio) responded that part or all of the non-federal share would be funded with new or increased provider taxes or fees, or with insurance premium taxes.

In addition to the “Medicaid provider taxes” included in this report, several states have more general health care taxes that are used to fund their Medicaid programs. For instance, some states have taxes on insurance premiums or health care claims that apply to all payers. California, Michigan, Ohio, and Pennsylvania are examples of states that had taxes on MCOs that were deemed by the states to be non-Medicaid taxes, but were found by CMS to be non-permissible Medicaid provider taxes. As noted above, California and Pennsylvania have replaced their MCO taxes with ones that meet federal guidelines. The Michigan “use tax,” which applies to MCOs among other entities, is not included in the tables in this report and will end on December 31, 2016. (The Ohio MCO tax is also scheduled to sunset, but not until June 30, 2017.)