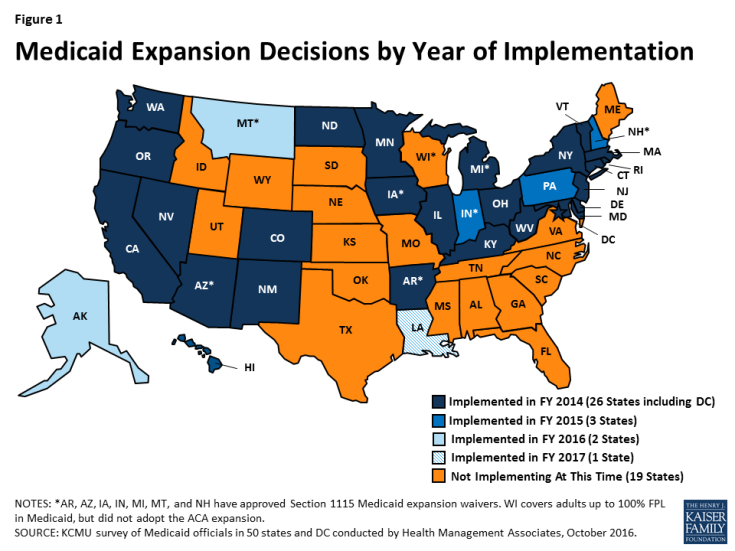 As a result of new coverage pathways (including both expanded Medicaid coverage and the availability of Marketplace subsidies), some states eliminated Medicaid coverage for beneficiaries with incomes above 138 percent FPL (most of this activity occurred in FY 2014 and was covered in earlier surveys). In addition, some individuals who had qualified through more limited Medicaid eligibility pathways, such as those related to pregnancy, family planning, spend-down, and the Breast and Cervical Cancer Treatment (BCCT), could be eligible for more comprehensive coverage through income based pathways in states that adopted the ACA Medicaid expansion. Even with alternative coverage options, many states have maintained most limited coverage options, although enrollment through these pathways may have declined. Changes to coverage above 138 percent of the FPL or to limited pathway coverage in FY 2016 or FY 2017 are listed below. Because individuals have access to Medicaid through another eligibility pathway or to other coverage options, these changes are not counted as positive or negative eligibility changes, but as “no change” (Tables 1 and 2). 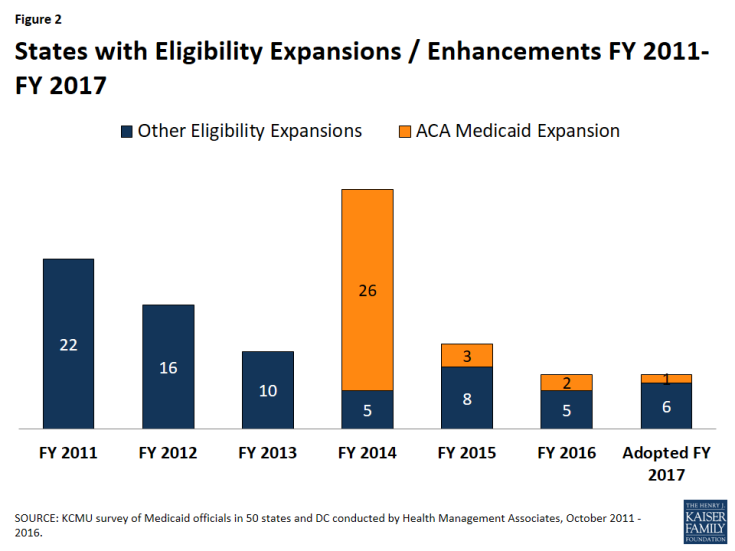 Only two states in FY 2016 (Ohio and Virginia) and two states in FY 2017 (Arkansas and Missouri) made or plan to make eligibility restrictions. These are mostly targeted restrictions that would affect small groups of beneficiaries. Arkansas is seeking a modification to its “Private Option” waiver to, effective January 1, 2017, eliminate retroactive eligibility for expansion enrollees; the waiver is pending at CMS. Missouri plans to begin the process of suspending its family planning waiver in FY 2017 following legislative restrictions in the FY 2017 appropriations bill.1 The FY 2016 reduction in eligibility for waiver services in Virginia for seriously mentally ill individuals (GAP waiver program) was partially restored in FY 2017.

With the ACA Medicaid expansion to low-income adults, many individuals involved with the justice system are now eligible for Medicaid. Connecting these individuals to health coverage can facilitate their integration back into the community by increasing their ability to address health needs, which may contribute to greater stability in their lives as well as broader benefits to the individual and society as a whole. An increasing number of states have efforts underway to enroll eligible individuals moving into and out of the justice system into Medicaid. In April 2016 guidance, the Centers for Medicare and Medicaid Services (CMS) clarified that incarcerated individuals may be determined eligible for Medicaid and that the state Medicaid agency must accept applications and process renewals for incarcerated individuals.2 Although individuals may be enrolled in Medicaid while they are incarcerated, Medicaid cannot cover the cost of their care, except for inpatient services. In its recent guidance, CMS clarified who is considered an inmate of a public institution and therefore only able to receive Medicaid coverage for inpatient care.3 This survey asked states about a number of initiatives to promote Medicaid coverage for individuals involved with the criminal justice system (Exhibit 1 and Table 3).

The vast majority of states (44) had policies in place as of FY 2015 to obtain Medicaid reimbursement for inpatient care provided to incarcerated individuals who are Medicaid eligible. Four additional states implemented these policies in FY 2016 or plan to in FY 2017.

Given that the Medicaid expansion has significantly increased Medicaid eligibility among individuals moving into and out of the criminal justice system, many states are newly adopting or expanding initiatives to connect this population to Medicaid coverage. States are adopting policies to suspend Medicaid eligibility (rather than terminate eligibility) during incarceration. In FY 2015, 25 states had these policies in place for at least some individuals entering jail or prison, and 41 states are expected to have suspension policies by the end of FY 2017.

Medicaid and corrections agencies are also working together to help connect individuals to coverage as they are released from jail or prison back to the community. Some of these approaches include providing outreach and enrollment assistance pre-release, expedited enrollment processes for individuals being released, and Medicaid eligibility staff dedicated to processing applications for this population. A number of states have such initiatives in place and some states reported expanding these enrollment activities in FY 2016 or 2017. The most common expansions involve increasing the geographic scope of jail initiatives or increasing the number of prisons where eligibility assistance is provided.

For over three decades, Medicaid has been a key source of financing of births for low- and modest-income families. Women who would not otherwise be eligible can qualify for Medicaid coverage for pregnancy, delivery, and postpartum care due to higher income eligibility thresholds for pregnant women.4 Medicaid directors were asked to provide the most recent available data on the share of all births in their states that were financed by Medicaid. About half of states were able to provide data for calendar 2015 or fiscal year 2015.5 Other states generally provided data from 2013 or 2014. On average,6 states reported that Medicaid pays for just over 47 percent of all births. Eight states (Arkansas,7 Louisiana, Mississippi, Nevada, New Mexico, Oklahoma, South Carolina, and West Virginia) reported that Medicaid pays for 60 percent or more of all births in their state, while nine states reported that Medicaid finances less than 40 percent of all births (Iowa, Kansas, Nebraska, New Hampshire, North Dakota, Pennsylvania, Utah, Virginia, and Wyoming).

States have flexibility to charge limited premiums and cost-sharing in Medicaid, subject to federal parameters. Premiums are generally prohibited for beneficiaries with income below 150 percent FPL. Cost-sharing for people with income below 100 percent FPL is limited to “nominal” amounts specified in federal regulations, with higher levels allowed for beneficiaries at higher income levels. However, certain groups are exempt from cost-sharing, including mandatory eligible children, pregnant women, most children and adults with disabilities, people residing in institutions, and people receiving hospice care. In addition, certain services are exempt from cost-sharing: emergency services, preventive services for children, pregnancy-related services, and family planning services. Total Medicaid premiums and cost-sharing for a family cannot exceed 5 percent of the family’s income on a quarterly or monthly basis.8

Details about state actions related to premiums and copayments can be found in Table 4.

Medicaid generally is not allowed to charge premiums to Medicaid beneficiaries with incomes at or below 150 percent FPL, although in limited cases certain populations, generally with income above 100 percent FPL, may be charged premiums (sometimes referred to as “buy-in” programs). Forty-four (44) states have buy-in programs for working people with disabilities and most of these states impose premiums.9 States also have the option to implement buy-in programs for children with disabilities. States that reported implementing premium-based programs under the Family Opportunity Act (FOA) for children with disabilities in families with incomes that otherwise exceed Medicaid limits include Colorado, Louisiana, North Dakota, and Texas.10 More recently, some states have received approval or were seeking approval to impose premiums under a Medicaid expansion waiver.

Other implemented or proposed changes in premiums or contributions are for the Medicaid expansion populations.

Kentucky has a waiver pending with CMS that would add premiums to its traditional Medicaid expansion program, along with other changes, but the proposed effective date is not until July 1, 2017 (FY 2018) so it is not captured in this report.

Most state Medicaid programs require beneficiary copayments, but to varying degrees. Twelve (12) states reported changes to copayment requirements in either FY 2016 or FY 2017 (Table 4). Key changes are described below: