Medicaid is the nation’s primary payer for long-term services and supports (LTSS), covering a continuum of services ranging from home and community-based services (HCBS) that allow persons to live independently in their own homes or in other community settings to institutional care provided in nursing facilities (NF) and intermediate care facilities for individuals with intellectual disabilities (ICF-ID). In 2013, spending on HCBS (51 percent of total LTSS expenditures) surpassed spending on institutional LTSS (49 percent of total LTSS expenditures) for the first time in the history of the program. The trend toward spending for services in the community continues, with the percentage of spending for HCBS in 2014 growing to 53 percent of total LTSS spending.1 This achievement represents a fundamental rebalancing of program expenditures over the last twenty years; in 1995, Medicaid reported that 82 percent of national expenditures on LTSS was in institutional settings, and that share is now less than half.2 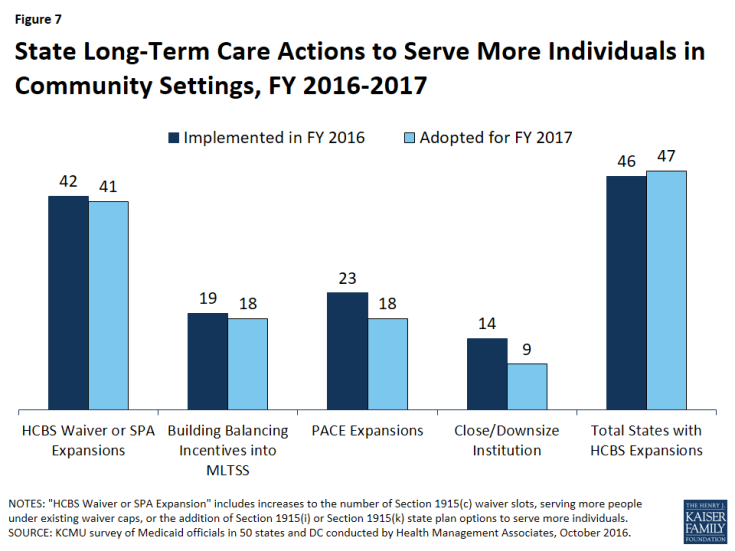 Several states are also using MLTSS strategies intended to serve more individuals in home and community-based settings. Nineteen (19) states in FY 2016 and 18 states in FY 2017 report they include or will include specific rebalancing incentives (performance targets and/or financial incentives) in managed care contracts to encourage MCOs that cover LTSS to expand access to HCBS. This includes a number of states that provide HCBS for some or all populations under Section 1115 waivers, in connection with MLTSS, instead of through Section 1915(c).4 For example, Tennessee, which transferred its Section 1915(c) waiver services for several LTSS populations to a Section 1115 waiver with its expansion to MLTSS in 2010 (TennCare CHOICES), reported that it expects to convert its remaining Section 1915(c) waiver for persons with intellectual and developmental disabilities to Section 1115 authority in FY 2017. The state anticipates significant expansion in HCBS capacity for this population under its managed care approach. See the MLTSS section below for more detail on the use of MLTSS in state Medicaid programs.

PACE continues to be reported as a rebalancing tool, with 23 states in FY 2016 and 18 states in FY 2017 expecting growth in these programs. For most of these states, growth will come within existing PACE sites; however, Florida, New Jersey, Rhode Island, Texas, and Maryland reported that they expect to add at least one new PACE site.

Further, 14 states in FY 2016 and nine states in FY 2017 expect to close or downsize a state institution and transition residents into community settings. This strategy is still an important tool of rebalancing. In addition, both Indiana and Massachusetts imposed a moratorium on new nursing facility beds in FY 2016.

States were also asked if they have adopted or plan to adopt new restrictions on the number of people served in the community in FY 2016 or FY 2017. Two states (Missouri and North Carolina) reported that they were acting to restrict PACE programs. Missouri terminated its PACE site in FY 2016, and North Carolina, citing concern over the rate of growth in the program, placed a limit on the number of individuals each PACE site can enroll each month. Virginia reported that it intends to cap enrollment in its Alzheimer’s Assisted Living Section 1915(c) waiver, which currently serves 56 people and cannot meet the new CMS regulatory standards for home and community-based settings; a stakeholder group is meeting to formulate plans for individuals who are currently served under the waiver. While New Jersey is expanding HCBS through other initiatives, the state also increased the number of institutional LTSS beds in FY 2016; 60 additional long-term care beds for individuals who have Huntington Disease were approved by the New Jersey Department of Health in FY 2016.

Many of the services outlined in CMS’s Informational Bulletin were developed under the auspices of federal grant programs, including the Money Follows the Person (MFP) rebalancing demonstration. MFP is a federal grant program, enacted under the Deficit Reduction Act of 2005 and extended through September 2016 by the Affordable Care Act, which operates in 44 states. Enhanced federal funding under MFP has supported the transition of over 52,000 individuals from institutional to home and community-based settings of LTSS as of mid-2015.6 Under MFP, states identified the lack of affordable and accessible housing as a major barrier to assisting individuals to leave institutional settings of care. With MFP resources, many states have offered new housing related services, incorporated housing expertise within the Medicaid program to increase the likelihood of successful community living for persons who need supports, and engaged in strategic activities to assist in identifying and securing housing resources for individuals who choose HCBS.

After September 2016, states can continue to transition individuals under MFP through 2018 (with CMS approval) and have through 2020 to use their remaining funding.7 As of July 2016, 23 states reported that they currently offer housing-related services under a state plan, Section 1915(c), or 1115 waiver authority that the state intends to continue after the expiration of the MFP grant program. Most of these states are using current Section 1915(c) waivers that provide community transition services and environmental modifications for seniors, individuals with physical disabilities and/or individuals with intellectual or developmental disabilities. Other states, including Alabama, Kansas, Massachusetts, Michigan, and Ohio, plan to continue to offer housing coordinators or other search services to assist waiver beneficiaries. States have noted that some demonstration services and program supports will terminate when MFP funding expires.

Beyond MFP, 16 states reported that they have or will implement or expand housing-related services, as outlined in the Informational Bulletin, in FY 2016 or FY 2017; one state has done so in 2016, eight states plan to do so in 2017, and seven states plan to implement or expand housing-related services in both years (Exhibit 7). States report planning to use an array of authorities, in addition to Section 1915(c) waivers, for offering housing related services. For example, the District of Columbia proposes to offer health home services that support links to housing, and California proposes to offer housing-related services using a health home-based Whole Person Care Pilot under a Section 1115 waiver. New Jersey plans to use a Section 1115 waiver to offer a supported housing benefit to a wide range of Medicaid beneficiaries, including people who are homeless, at-risk of homelessness, residing in nursing facilities, are jail involved, or have a behavioral health diagnosis. Connecticut proposes to provide transition supports and tenancy sustaining supports using a Section 1915(i) State Plan Amendment. Under its Section 1115 waiver, Washington plans to provide supportive housing services (including individual housing transition services and individual tenancy sustaining services) to Medicaid beneficiaries age 18 or older who meet HUD’s definition of “chronically homeless” or have frequent or lengthy institutional contacts or adult residential care stays or have frequent in-home caregiver/provider turnover or meet specific risk criteria.8

HCBS benefit restrictions reflect the elimination of a covered benefit or the application of utilization controls for existing benefits. For FY 2016, West Virginia applied service limitations in its home and community-based services waiver serving persons with intellectual and developmental disabilities and eliminated a benefit in two other HCBS waivers. For FY 2017, Tennessee is limiting coverage for facility-based day services (Exhibit 8).

As of July 1, 2016, almost half of states (23 states) covered LTSS through one or more of three types of capitated managed care arrangements: a Medicaid MCO (covering Medicaid acute care and LTSS), a PHP (covering only Medicaid LTSS), or an MCO arrangement for dually eligible beneficiaries (covering Medicaid and Medicare acute care and Medicaid LTSS services in a single contract, under the financial alignment demonstration for dual eligibles). Of the 23 states that reported using one or more of these MLTSS models, eight states reported using two models, and one state (New York) reported using all three. Among states with MLTSS arrangements, 18 states offer a Medicaid MCO that covers both Medicaid acute services and Medicaid LTSS. (Michigan, South Carolina, and Virginia are not among these 18 states; however, they use Medicaid MCOs that cover Medicaid acute and Medicaid LTSS (as well as Medicare acute care) in financial alignment demonstration (FAD) initiatives for duals.) Just five states reported offering a Medicaid LTSS PHP. Of the states with capitated MLTSS, 15 offered some form of managed care plan on a statewide basis for at least some LTSS populations as of July 1, 2016.

Other states not participating in a formal demonstration have taken action to encourage improved coordination and integration of services for the dually eligible population under MCO arrangements. Five states (Arizona, Hawaii, Minnesota, Tennessee, and Wisconsin) reported that they require Medicaid-contracting MCOs to also offer a Medicare Dual Eligible Special Needs Plan (D-SNP)13 to allow a beneficiary to choose to receive Medicare as well as Medicaid benefits from the same plan (though not through a single contract). Florida contracts for MLTSS with MCOs that are chronic disease SNPs14 for dually eligible beneficiaries. New Jersey and Idaho reported that at least one plan in each state is a Fully Integrated Dual Eligible (FIDE) SNP,15 which allows beneficiaries to choose a single MCO to offer both Medicare and Medicaid benefits, creating an opportunity for improved coordination and integration.

This year’s survey also asked states with capitated MLTSS arrangements whether, as of July 1, 2016, certain populations were enrolled on a mandatory or voluntary basis or were always excluded. On the survey, states selected from “always mandatory,” “always voluntary,” “varies (by geography or other factor),” or “always excluded” for the following populations: seniors, persons with ID/DD, non-elderly adults with physical disabilities, and full-benefit dually eligible beneficiaries. As shown in Exhibit 9 below, seniors were most likely to be enrolled on a mandatory basis statewide (13 states), while persons with ID/DD were least likely to be enrolled on a mandatory basis (8 states) and also most likely to be excluded from MLTSS enrollment (4 states). No state with a MLTSS program always excludes individuals who have full dual eligibility status from enrollment.

Almost every MLTSS state (22 states) includes both institutional and HCBS in the same contractual arrangement, though this sometimes varies within a state across populations. For example, Minnesota offers both institutional and HCBS in the same MCO for seniors, but only institutional LTSS are included in an MCO for individuals with disabilities who are under the age of 65. One state (North Carolina) reported covering only HCBS in its MLTSS program for persons with intellectual and developmental disabilities.

The growth in the use of MLTSS has continued since the prior survey reporting period. In FY 2015, six states (California, Michigan, New Jersey, New York, South Carolina, and Texas) implemented MCO arrangements for LTSS for at least some populations, some of these in conjunction with implementing a FAD. In FY 2016, four states implemented or expanded MLTSS to new parts of the state, while four states expanded MLTSS to new populations. South Carolina and Wisconsin anticipate geographic expansion in MLTSS in FY 2017, while five states anticipate adding populations to MLTSS in FY 2017 (Exhibit 10).

Only two states reported any reduction in the use of MLTSS. Massachusetts imposed a temporary cap on enrollment in OneCare (its FAD model) in FY 2016, but that cap was subsequently lifted. Idaho noted that its one MLTSS PHP is expected to reduce its service plan area in FY 2017.

CMS has identified a gap in the national availability of tested, reliable and valid quality measures for HCBS. A variety of efforts are underway to address this gap. The US Department of Health and Human Services has contracted with the National Quality Forum to create a conceptual framework for HCBS quality measurement; to synthesize existing evidence, measures, and measure concepts; to identify gaps in HCBS measures based on the framework; and to make recommendations for HCBS measure development efforts.16 17