The Medicare Advantage, individual (also known as non-group), and fully-insured group (employer) health insurance markets are three distinctly different markets. Each of these private insurance markets has unique features that affect the profitability for insurers, and which in turn affect coverage for eligible people. These markets are dominated by many of the same health insurers, with most of the country’s largest health insurers offering plans in all three markets.

Medicare Advantage. The Medicare Advantage market provides Medicare-covered benefits through private plans to 22 million Medicare beneficiaries in 2019, with enrollment steadily increasing over the past decade. The federal government makes risk-adjusted payments (higher payments for sicker enrollees and lower payments for healthier enrollees) to plans (averaging $11,545 per enrollee in 2019) to cover the preponderance of the cost of Medicare benefits for plan enrollees, with some plans charging enrollees an additional premium. In addition, the Medicare program pays plans more if they submit bids below the “benchmarks” set in statute or qualify for quality-related bonus payments; all of these payments are included as premiums in this analysis. In 2019, the federal payments to Medicare Advantage plans are about the same as what it would cost to cover the same people under traditional Medicare. When health risk coding differences are fully taken into account, payments to plans are 1-2% higher than traditional Medicare. Selection bias has been estimated to result in annual spending that is $1,253 lower for each Medicare Advantage enrollee compared to similar people who remain in traditional Medicare, suggesting that pegging payments to the costs of people in traditional Medicare overpays plans.

Individual Market. The individual market, which accounted for about 14 million people in 2018, includes coverage purchased by individuals and families through the Affordable Care Act’s exchanges (Marketplaces) as well as coverage purchased directly off-exchange, which includes both plans complying with the ACA’s rules and non-compliant coverage. (e.g., grandfathered policies purchased before the ACA went into effect and some short-term plans). The federal government provides subsidies for low-income people in the Marketplace and includes measures, such as risk adjustment, to help limit the financial liability of insurers. Insurers in the individual market receive premium payments from enrollees, plus any federal subsidies for people in the Marketplaces. Individual market premiums and plan availability have been considerably less stable than the Medicare Advantage and group markets.

Group Market. The fully-insured group market, the largest of the three markets (over 30 million people in 2018, excluding plans regulated by California’s Department of Managed Health Care), serves employers and their employees that are enrolled in fully-insured health plans. This market includes both small and large group plans, but excludes employer-sponsored insurance plans that are completely or partially self-funded, which account for 61% of all workers with employer-sponsored insurance.1 Plans typically receive premium payments from both employers and their employees. While both average claims and average premiums for enrollees in the group market have increased, the market has been relatively stable for insurers over the past decade.

Average gross margins, or the average amount by which premium income exceeds claims costs per enrollee in a given year, are a key measure of insurer financial performance.

Average Gross Margins. Gross margins for Medicare Advantage plans averaged $1,608 per covered person per year between 2016 and 2018 – about double the average annual gross margins for plans in the individual and group markets ($779 and $855 per member per year, respectively; Figure 1).

Average gross margins were calculated as the difference between total premiums collected and total medical expenses incurred, and were averaged across the past three years (2016 to 2018) to even out year-to-year fluctuations, particularly those in the individual market. As discussed more below, there has been significant volatility in individual market margins, due in part to underpricing in the early years of ACA implementation and more recent overcorrections amid uncertainty about ACA repeal, enforcement of the individual mandate, and in response to the Trump Administration’s decisions to cease cost-sharing subsidy payments and reduce funding for outreach. The three-year average gross margins shown in Figure 1 include a year when individual market insurers generally saw significant losses as well as a year when profits were unusually high. 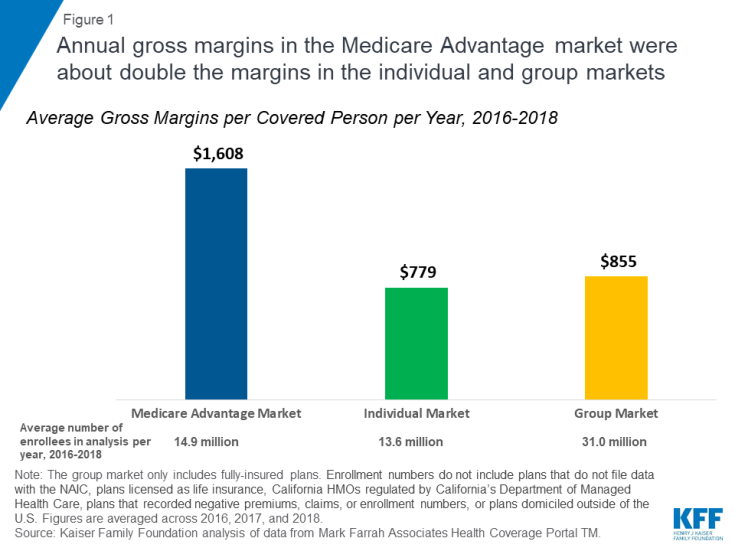 Gross margins do not necessarily translate into profitability since they do not account for administrative expenses. Nonetheless, gross margins are an indicator of financial performance and signal how much insurers retain, including profits, after paying for enrollees’ covered medical expenses.

Figure 2: Since 2006, Medicare Advantage plans’ average gross margins have exceeded those for plans in the individual or group markets

Gross margins in the individual market have been more volatile. Gross margins fell from about $446 per member per year in 2013 to -$122 in 2015 as the ACA’s market rules and consumer protections went into effect in 2014. At the time, insurers had very little information to work with in setting their premiums and many underpriced, experiencing significant losses. By 2017, the individual market generally had begun to stabilize. However, going into 2018, insurers raised benchmark premiums by an average of 34% in response to policy changes such as the Trump Administration’s decision to cease cost-sharing subsidy payments and uncertainty over whether the ACA as a whole would remain law or whether the individual mandate would be enforced. These premium hikes, along with slow claims growth, made 2018 the most profitable year for individual market insurers since the ACA went into effect. These high 2018 individual market profits will be offset somewhat by record high Medical Loss Ratio rebates insurers are required to issue in 2019 to 2018 enrollees due to overpricing. Premiums fell slightly on average for 2019, as it became clear that some insurers had raised 2018 rates more than was necessary, and margins will likely be lower for 2019.

Simple loss ratios, or the percentage of premium income that insurers pay out in claims, provide further context about the financial status of each of these markets. Despite differences in gross margins, medical expenses comprised a similar share of total premiums collected (simple loss ratios) across plans in the Medicare Advantage, individual, and fully-insured group markets (Figure 3). Between 2016 and 2018, the medical expenses of Medicare Advantage enrollees averaged about 86% of the total premiums collected by Medicare Advantage plans (primarily federal payments for Medicare-covered benefits), which is similar to the individual market (84%) and fully-insured group market (84%) three-year averages. 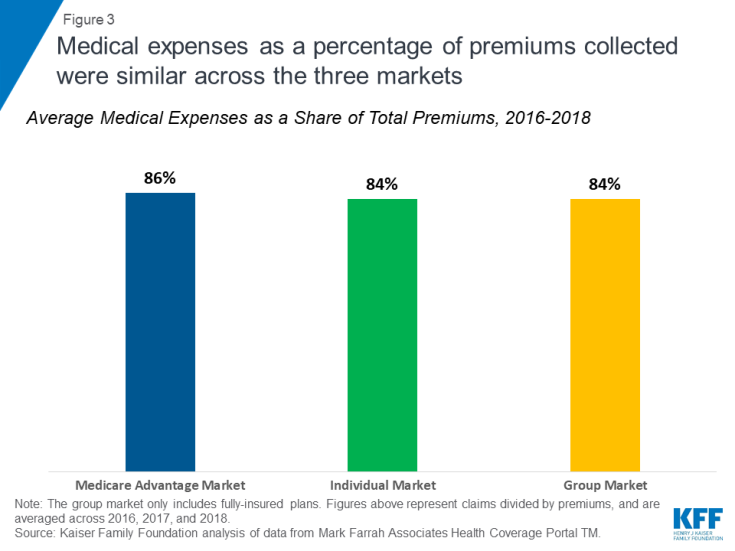 Figure 3: Medical expenses as a percentage of premiums collected were similar across the three markets

Medical expenses as a percentage of total premiums collected have been relatively constant since 2006, the first year for which data are available, for the plans in the Medicare Advantage and group markets. There has been quite a bit more year-to-year variation in the individual market since 2014, as the major provisions of the ACA went into effect and created uncertainty for insurers (see Appendix Table 1).

As with the gross margins, the simple loss ratios do not account for administrative expenses, and medical loss ratios as defined by the ACA are generally higher because the ACA calculation makes adjustments for taxes, fees, and quality improvement expenses. As with the analysis of gross margins, medical expenses as a percentage of premiums collected were averaged across three years (2016 to 2018) to even out year-to-year fluctuations in the individual market.

Variation in Performance Among Insurers Over Time

In 2018, gross margins among insurers in the bottom quartile of the Medicare Advantage market (those with margins below $1,014) were similar to, or higher than, the average gross margin in the group market ($897). Conversely, many insurers in the top quartile of gross margins in the group market (those with margins above $1,215) had margins lower than the average in the Medicare Advantage market ($1,683) in 2018. The group market may have less variation in gross margins in part because of less uncertainty and because it has not been as subject to changes in policy. In all markets, 5-10% of insurers had negative gross margins, with medical expenses exceeding premiums, indicating that some insurers are losing money in the same markets where other insurers are making profits.

Figure 5: Total gross margins for Medicare Advantage plans have been rapidly nearing those for the group market

For 2016 to 2018, total gross margins averaged $23.9 billion, $10.6 billion, and $26.5 billion per year for the Medicare Advantage, individual, and group markets, respectively.2 Since this analysis excludes some plans in these markets (see Methods for more details), these aggregated margins would be larger if all plans were included.

This analysis suggests insurers are profitable in each of the three markets. There is a particular focus in policy debates right now on Medicare Advantage plans. Several Medicare-for-All and other health reform proposals would allow private insurers to administer benefits under a new Medicare-like public option, which could be lucrative and attractive for health insurers, depending on how payments to plans are set. Based on the history of Medicare Advantage plans, setting payments to private plans at the appropriate rate remains a challenge, given competing goals of broadening plan choice and fiscal accountability. With a new public program or option, policymakers are likely to face similar challenges, depending on their goals and priorities.