Medicare-for-All proposals have sparked discussion about the role of private health insurance in the U.S. health care system. Some of the current Medicare-for-All proposals would essentially eliminate private insurance. Others would allow private insurers to administer benefits under the new public program, similar to the role of Medicare Advantage plans today, which serve as a private-plan alternative to traditional Medicare. Another set of proposals would create a new Medicare-like public plan option, but preserve a role for private health insurance, including employer-sponsored coverage and policies sold to individuals and families in the Affordable Care Act (ACA) Marketplaces.

As context for these discussions, this brief examines and compares the financial performance of insurers in the Medicare Advantage, individual, and fully-insured group markets, using data reported by insurance companies to the National Association of Insurance Commissioners and compiled by Mark Farrah Associates. We analyze how insurers’ gross margins vary across the three markets, over time, and among insurers. Gross margins are the difference between premiums collected and medical expenses and do not account for administrative expenses. The brief also examines medical expenses as a percentage of premiums collected (simple loss ratios) across these three markets. See the Methods section for more information on calculations. 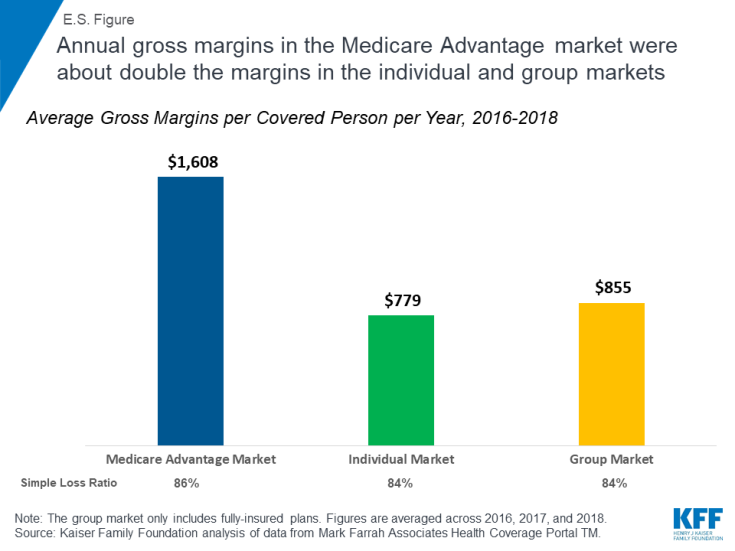 Each of these three health insurance markets now appear to generate high gross margins per person, particularly for insurers of Medicare Advantage plans.