The Kaiser Commission on Medicaid and the Uninsured conducted a survey of Medicaid programs in all 50 states and the District of Columbia on coverage of and cost sharing for preventive services. Thirty-nine states and the District of Columbia replied to the survey. States were asked whether they covered 40 services recommended by the USPSTF and ACIP as well as seven additional services recommended for women by HRSA. States were also asked whether they charge cost sharing for services, except for pregnancy-related services.

Great strides in early detection and advances in treatment options have improved overall cancer survival rates over many decades. The USPSTF recommends three different services related to breast cancer as well as screening tests for cervical and colorectal cancers.

Some states noted mammograms and cervical cancer screenings were at least in part covered through an optional eligibility pathway adopted by all states under the Breast and Cervical Cancer Prevention and Treatment Act. This option allows states to extend Medicaid coverage for cancer treatment to uninsured women diagnosed with breast or cervical cancer through a federal screening program; states receive a higher matching rate for services reimbursed under this program equivalent to the CHIP matching rate.1 A few states also noted coverage of these services under the family planning benefit, which is reimbursed at a 90 percent matching rate. 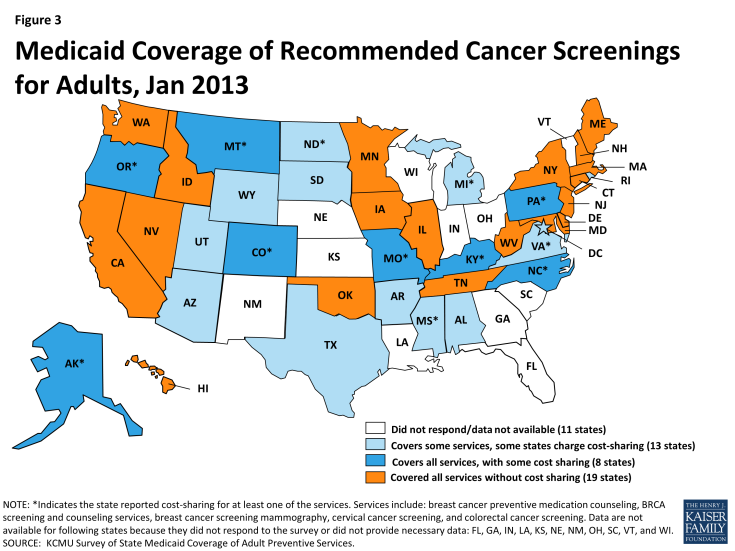 There are 20 million new sexually-transmitted infections (STIs) every year.2 Undetected and untreated STIs can increase a person’s risk for HIV and can lead to other adverse health consequences, such as infertility. According to the Centers for Disease Control and Prevention (CDC), less than half of people who should be screened for STIs receive recommended screening services.

Almost all states participating in this survey reported covering screening tests for Chlamydia, Gonorrhea, and Syphilis as recommended by the USPSTF. Eight states reported that at least one of these STI screenings was subject to cost-sharing. Fewer states cover counseling about STIs as recommended by the USPSTF, though 32 states did report covering this service. Seven states indicated that they charge cost-sharing for STI counseling services. In total, 31 states covered all the STI screenings and counseling services; 22 of these states do so without charging cost-sharing (Figure 4). 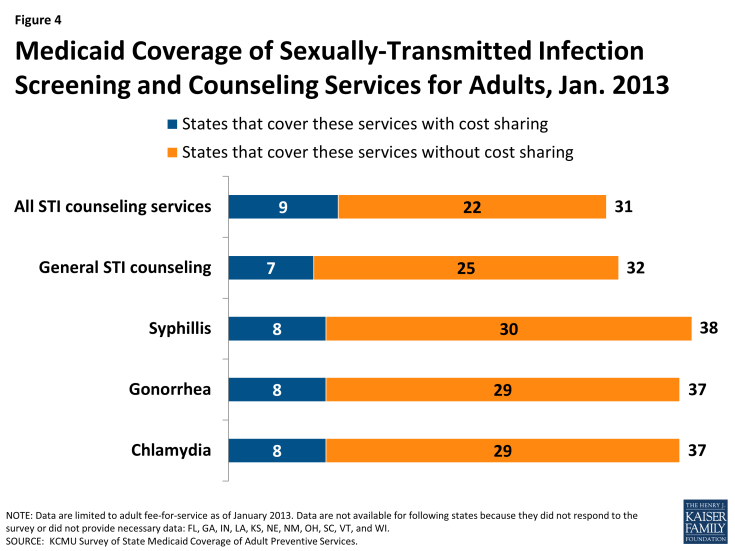 For non-elderly adults, states were surveyed regarding the coverage of two forms of HIV screenings: HIV for high risk populations and routine HIV screenings for adults. These survey results are reported in more detail on the Kaiser Family Foundation’s website at State Medicaid Coverage of Routine HIV Screening.3

Chronic conditions afflict millions of women and men with Medicaid. Nearly one in ten low-income, non-elderly adult Medicaid beneficiaries have been diagnosed with diabetes, more than two in ten with chronic obstructive pulmonary disease, nearly three in ten with heart disease, and over one-third have been diagnosed with a mental health condition.4 Research has shown that increases in the use of preventive services, particularly screenings and treatment related to cardiovascular disease, can lead to the prevention of a significant number of deaths per year.5 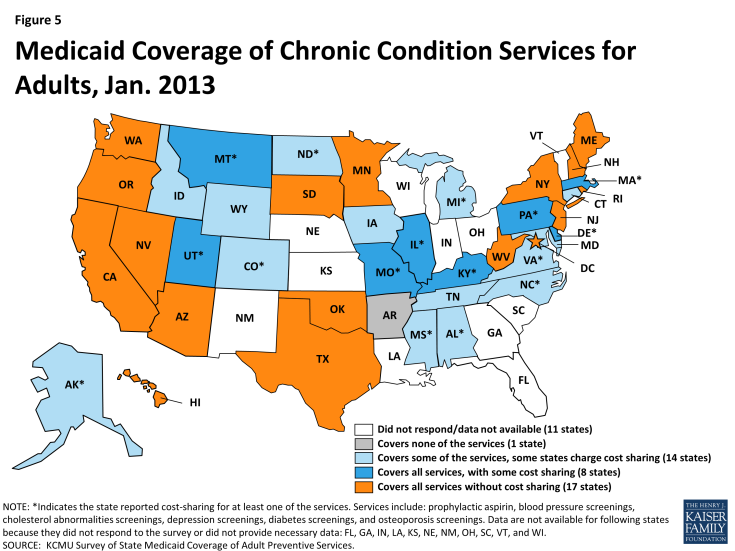 There is a high prevalence of diagnosed mental health conditions among Medicaid beneficiaries. The only preventive service specific to mental health in this survey was depression screening, which is covered by most states; 26 of the 34 states that cover this service do not charge cost-sharing.

The category of health promotion includes a number of services aimed at promoting healthy behaviors that help prevent chronic illnesses. This includes screening for obesity and counseling on a number of behavioral issues such as diet and nutrition, tobacco use, and alcohol use. 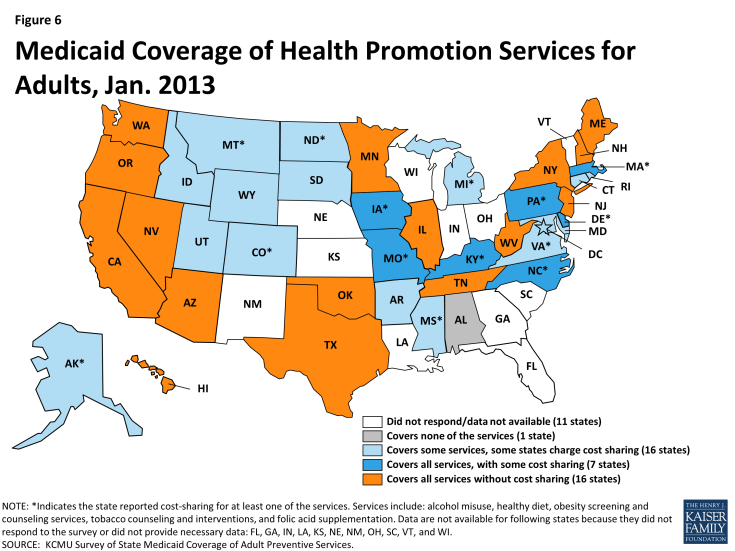 Nearly every state that covered healthy diet counseling services also covered obesity screening and counseling; the same 7 states also reported cost-sharing for both of these services.7 The obesity-related services are particularly important given the alarming high obesity rates in the United States and obesity’s link to many chronic conditions such as coronary heart disease, stroke, diabetes, and cancer.8

The most commonly covered service was tobacco use counseling and interventions (34 states) with 28 of these states doing so without cost-sharing. Research has highlighted the potential of tobacco use counseling and interventions to yield cost-savings and have large health impacts.9 Most of the surveyed states also cover counseling on alcohol misuse. Thirty-three states reported covering this service and 25 of them do not charge cost-sharing.

The USPSTF also recommends that women of childbearing capability take a daily supplement of folic acid to prevent certain birth defects. Thirty-one states reported covering this service and 21 of them do so without cost-sharing.

Immunizations (Tables 5A and 5B)

TABLE 5A: IMMUNIZATIONS RECOMMENDED IF OTHER RISK FACTORS ARE PRESENT (as of January 2013)

TABLE 5B: IMMUNIZATIONS RECOMMENDED FOR ALL PERSONS MEETING AGE AND GENDER REQUIREMENTS WHO LACK EVIDENCE OF IMMUNITY (as of January 2013) 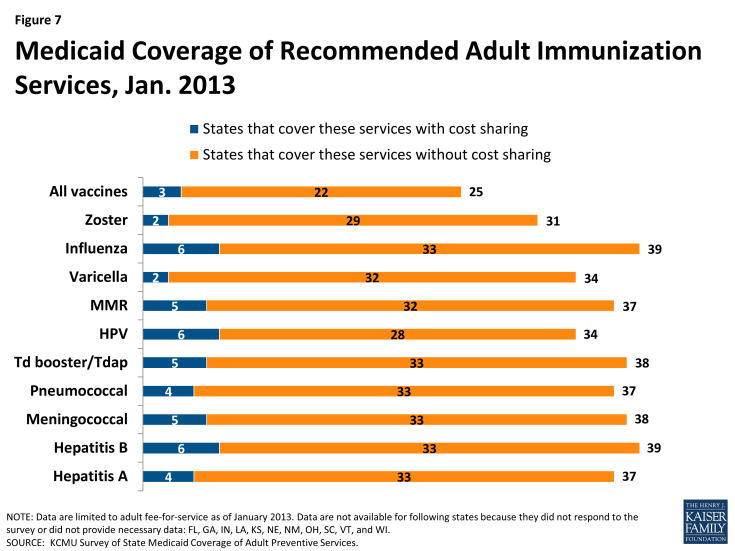 Approximately half of all births in the U.S. are paid for by Medicaid, making it the single largest payor for maternity care.10 Responses to the survey showed that preventive services recommended by the USPSTF for pregnant women were well-covered under state Medicaid programs in January 2013. Because pregnancy-related services are exempted from cost-sharing, states were not asked about cost-sharing for these services. (Figure 8). 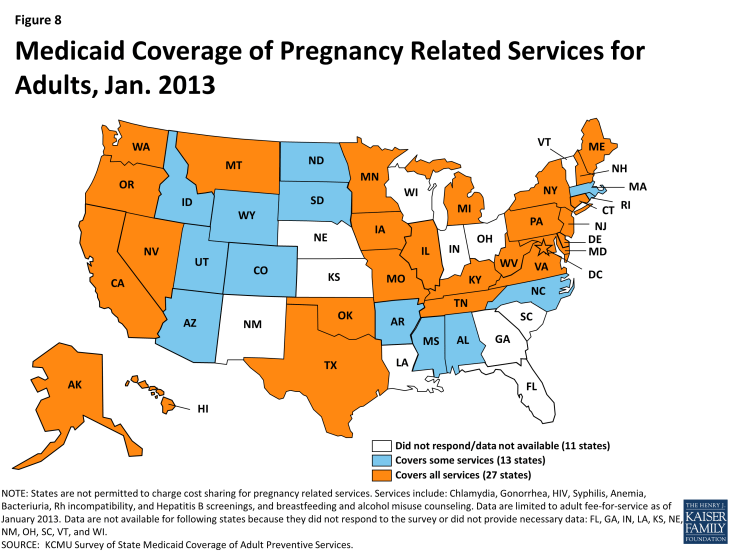 STI and HIV Screenings (Table 6A)

TABLE 6B: PREGNANCY-RELATED SCREENINGS AND COUNSELING SERVICES (as of January 2013)

All states responding to the survey reported covering screenings for Hepatitis B, as well as Rh incompatibility at both the first prenatal visit and again at 24-28 gestational weeks. All but two states also covered bacteriuria and anemia screenings. While not as common, the majority of states also cover breastfeeding counseling (29 states) and alcohol misuse counseling (36 states). 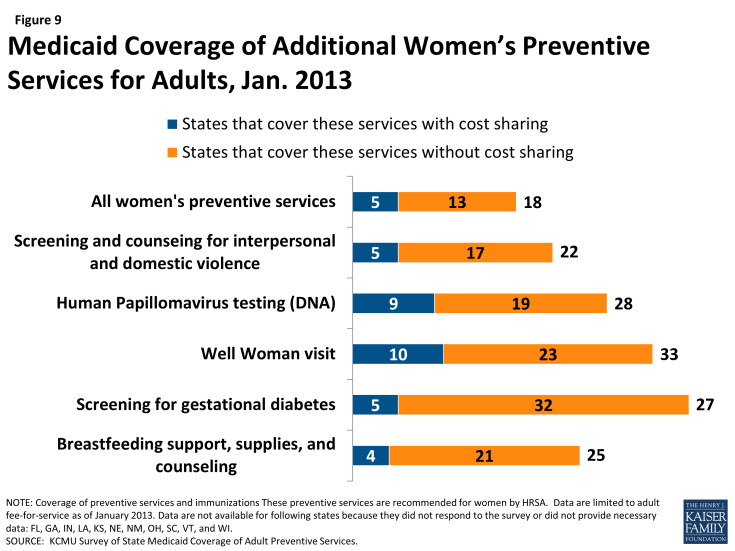 Screening for Gestational Diabetes and Breastfeeding Support, Supplies, and Counseling (Table 7A)13

Most states (32) cover screening for gestational diabetes in pregnant women without cost sharing. Coverage for breastfeeding supports is not as common, with only 21 states reporting they cover these supports without cost sharing. While the USPSTF has recommended breastfeeding counseling prior to the passage of the ACA, the recommendation from HRSA is more expansive as it recommends coverage of counseling as well as supplies, in particular breast pumps.

HRSA also recommends coverage for at least one annual well woman visit, DNA testing for HPV, and screening and counseling for interpersonal and domestic violence.   More than half of states cover well woman visits (33 states) and HPV testing (28 states), but that is not the case for interpersonal and domestic violence screening (22 states). However, many states charge cost sharing for these services and overall, of the 20 states that report covering all three of these services, 15 states cover them without cost-sharing.

The ACA provides a number of opportunities to improve access to and quality of care for many adults currently in Medicaid programs and those that are newly eligible since January 1, 2014. Medicaid coverage of preventive services for adults has historically been considered optional, meaning states can elect whether to cover preventive services in their Medicaid programs for adults. Furthermore, states are permitted to charge cost sharing for some beneficiaries, in the low-income population that Medicaid serves, where even nominal charges can pose a barrier to obtaining services.14

The data in this report reflect results from a survey fielded April through June 2013 that asked states about coverage and related cost-sharing for those preventive services recommended for non-elderly adults by the USPSTF (services that received a grade “A” or “B”,) some services under review by USPSTF at the time of the survey, some services recommended by HRSA and immunizations recommended by the ACIP; 47 services in total were included in the survey, which are detailed in Appendix A. These data do not reflect coverage for children or those over the age of 65 in Medicaid programs. Data are reported for 39 states and the District of Columbia that responded to the survey; data are not reported for the 11 states that did not respond or did not provide complete data: Florida, Georgia, Indiana, Kansas, Louisiana, Nebraska, New Mexico, Ohio, South Carolina, Vermont, and Wisconsin.

The survey instrument (a copy of which is provided in Appendix B) asked states if they had submitted or planned to submit a state plan amendment to receive the enhanced match for covering all the recommended services without cost sharing; if a state responded that they in fact did, they were assumed to have covered all preventive services with no cost-sharing asked about in the survey. All of the states that reported that they either submitted or planned to submit a SPA at the time of the survey have been approved (CA, NH, NJ, and NY) except for LA. While LA reported plans to submit a SPA, to date, there is no SPA submission posted for this state and documentation from the state’s website indicates that they do not cover at least some of the preventive services asked about in this survey. Therefore, data are not reported for LA. Some states did not respond to all questions; these cases are noted as “NR” in the appendix tables.

The survey asked if the state Medicaid program covered any of the recommended preventive services. Many states responded with service-specific caveats, most notably that service was covered only if medically necessary or that the service was covered but only as part of an office visit and not as a distinct service. For purposes of this report, states reporting such caveats were counted as covering these services.