This report is the latest in the California Longitudinal Panel Survey series examining how previously uninsured Californians navigate the health care system as the Affordable Care Act (ACA) goes into effect. Prior to the enactment of the health care law, California had the largest non-elderly uninsured adult population in the nation, at nearly 6 million.1 The state eagerly adopted options under the ACA to expand coverage to more low- and moderate-income people, primarily through the development of Covered California, the state’s marketplace where people can shop for and compare health plans and access financial help to purchase insurance, and by expanding eligibility for Medi-Cal, the state’s Medicaid program, to include parents and adults without dependent children earning 138% of the federal poverty level (FPL) or less (about $33,465 annually for a family of 4 in 2015). As an early adopter with large numbers of uninsured, California is a particularly valuable place to track how the rollout of the health care law has impacted the state’s uninsured, and its progress and challenges can help inform future enrollment efforts state-wide and nationally.

To track the experiences and perceptions of California’s uninsured as the ACA is implemented, the Kaiser Family Foundation is conducting the California Longitudinal Panel Survey series, following the same group of randomly selected Californians over time who were uninsured prior to the major coverage expansions under the ACA. The initial baseline survey was conducted with a representative sample of 2,001 nonelderly uninsured Californian adults in summer 2013, prior to the ACA’s initial open enrollment period.2 It found that most of the state’s uninsured said they wanted insurance but that most didn’t think they could afford it, as the vast majority reported family incomes under 400% FPL (about $94,000 a year for a family of 4 in 2013). At that time, the first open enrollment period under the ACA was just a couple months away and many of California’s uninsured were unaware of the upcoming coverage expansion opportunities and were unsure of how the law would impact them.

After the first open enrollment concluded in spring 2014, the second survey in the series followed up with the same group of previously uninsured Californians to find out whether they gained coverage or remained uninsured, how they felt about and interacted with the new coverage options, and what barriers to getting insurance remained.3 Many (58 percent) of California’s previously uninsured reported having health insurance at the close of the first open enrollment period. Most reported that shopping for coverage went smoothly, however some expressed difficulty affording the cost of coverage. Still, about 4 in 10 remained uninsured, despite the fact that many reported incomes that put them in the group likely eligible for Medi-Cal or for financial assistance through Covered California.

The third survey in the series, and the focus this report, returns to the same group of previously uninsured Californians a year later, after the second open enrollment period, to determine whether more of them had gained coverage, if some had moved out of coverage and back to being uninsured, and what their ongoing experience has been with their health insurance or the health care system more generally. 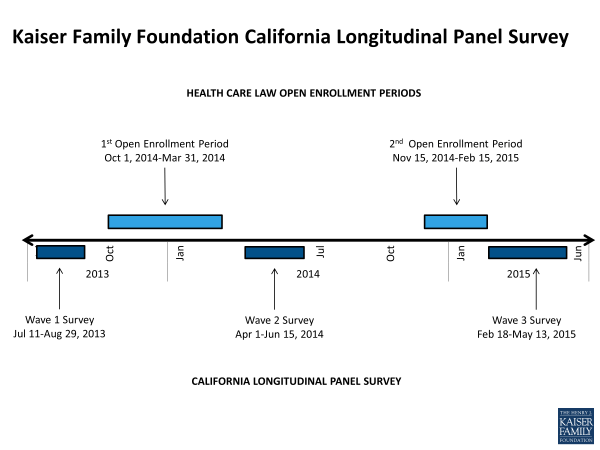 One additional survey in the series will continue to track these individuals as the expansions and changes in California under the ACA become the status quo as time passes. While the surveys are generally timed around the ACA’s open enrollment periods, it is important to note that eligible individuals are able to enroll in Medi-Cal year round.

California has made considerable strides in enrolling eligible low- and moderate-income people in new coverage options under the ACA. During the first open enrollment period, about 1.6 million people enrolled in Medi-Cal and 1.4 million people enrolled in Covered California.4 During the second open enrollment period, many renewed their coverage  and nearly 500,000 new enrollees signed up for plans through Covered California and more than 780,000 signed up for Medi-Cal.5 By following a representative group of Californians who were uninsured prior to the ACA’s coverage expansions, a key target of the ACA, we can better understand how these new coverage opportunities have impacted this group’s ability to access coverage and gain insight into their interactions with these new pathways to coverage.

While the ACA makes it easier for some people to get and keep coverage, other people will move in and out of coverage due to job status changes, shifts in income that change their eligibility for public subsidies or coverage, or missed deadlines for enrollment. While many previously uninsured Californians now have insurance, other Californians who had insurance prior to the ACA’s coverage expansions may now be uninsured, a group whose experiences and movements within the health care system are not captured in this series of surveys. As a result, this survey does not estimate the overall change in the number of uninsured Californians since the start of open enrollment, but instead estimates the share of previously uninsured who gained coverage.