Having health insurance appears to have eased some of the financial burden for previously uninsured Californians. About half (49 percent) of those who report now having coverage after the second open enrollment period say it is difficult to afford health care, while 86 percent of them said the same thing when they were uninsured in summer 2013, prior to the first open enrollment period. For those who have remained uninsured, there has been no substantial change in the large majority who say they have a difficult time affording care (85 percent vs. 81 percent in summer 2013). Additionally, those who report having health insurance now are about half as likely to say they have had problems paying medical bills in the past year than they did when they were uninsured in summer 2013 (23 percent vs. 45 percent) and that these bills have had a major financial impact (11 percent vs. 27 percent). 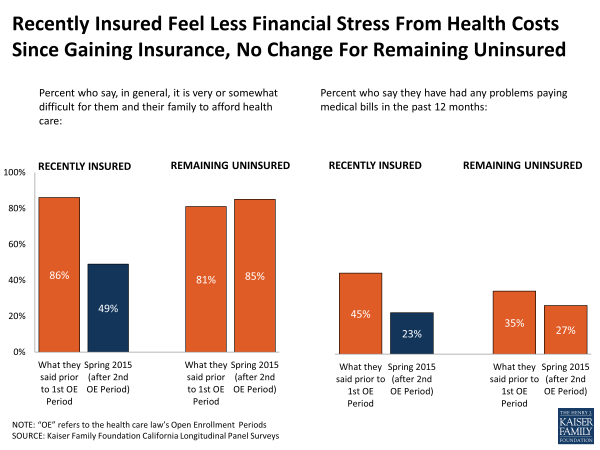 For those who report currently having health insurance in spring 2015 after the second open enrollment period, affording health care falls among one of several household expenses people say they have difficulty affording. But, for those who remain uninsured, health care is the most frequently cited burdensome household expense, with over 8 in 10 (85 percent) saying it is at least somewhat difficult to afford. 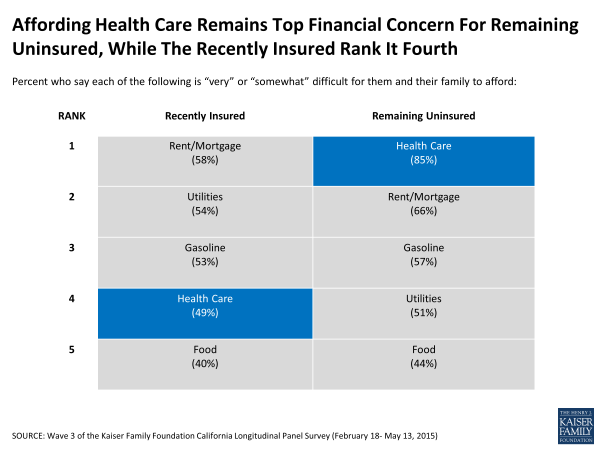 Even with some saying coverage is difficult to afford, overall, about half (53 percent) of previously uninsured Californians who have recently gained coverage say that having health insurance makes them feel more financially secure. Just over a third (36 percent) say it doesn’t make much of a difference, and a smaller share (10 percent) say it makes them feel less financially secure. In addition, most (62 percent) of those now with insurance say they feel well-protected by their health insurance, but a third say they feel vulnerable to medical bills. 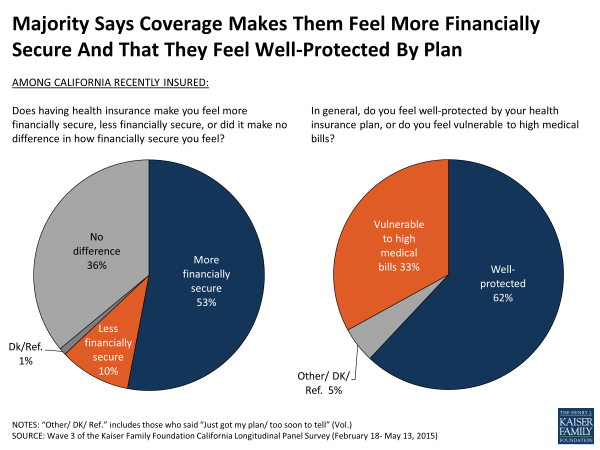 While many who have recently gained insurance report feeling more financially secure as a result of their coverage, a quarter of the recently insured report forgoing needed medical care in the past year due to cost, similar to the share of those remaining without insurance (31 percent). These shares may be similar due to the fact that most of California’s previously uninsured are lower income and face general affordability challenges. Further, some recently insured say they don’t understand the health care services their plan provides or what they have to pay to use services. Those recently insured who report not understanding their health insurance are more likely to report forgoing care than those who say they understand their health insurance at least somewhat well.

In addition to feeling less financial burden from health costs, those who say they have gained insurance recently are also more likely to report that their health needs are being met now that they have insurance compared to when they were uninsured – nearly 9 in 10 (86 percent) now versus about half (51 percent) in the baseline survey in the summer of 2013 prior to the first open enrollment period. Among those without coverage, there has been no statistical change in reports of how well their health needs are being met.

Those who recently gained insurance are also now more likely to say they have a usual source of care than before they had coverage (76 percent, compared to 60 percent in summer 2013). 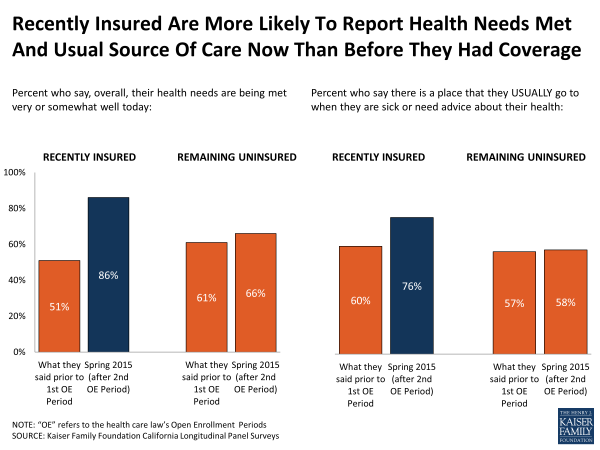