Section 5: A Closer Look At Previously Uninsured With Medi-Cal And Covered California Coverage

Because California was an early adopter of the health care law and led the way by expanding Medi-Cal and creating its own health insurance marketplace, the lessons learned from the experiences of previously uninsured Californians as they navigate the state’s new health insurance options provide insight both at the state level and nation-wide.

There continues to be large variation in enrollment method depending on type of coverage. Nearly half (48 percent) of California’s previously uninsured who enrolled in Covered California say they bought their policy online, compared to just 13 percent of Medi-Cal recipients. Large shares of Medi-Cal enrollees (40 percent) instead say they signed up in-person, while only 14 percent of Covered California enrollees say the same.  More than 2 in 10 in each group say they signed up over the phone. 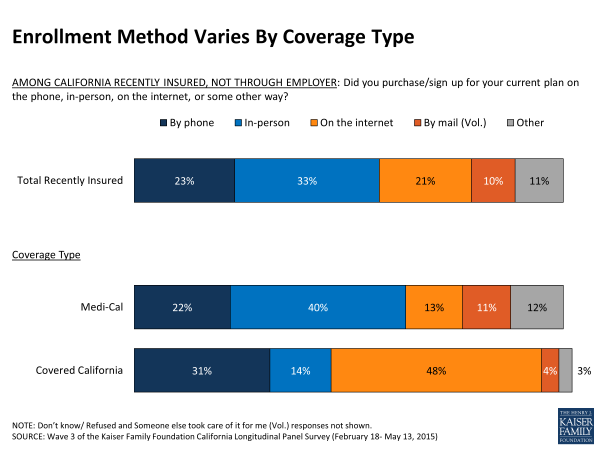 Over 4 in 10 (44 percent) recently insured Californians say that someone helped them enroll or renew their coverage, fewer than the roughly 6 in 10 (63 percent) who reported getting assistance last year, in part reflecting that some were automatically renewed in coverage. Community health workers were one of the primary helpers for those enrolling in Medi-Cal while most who enrolled in plans through Covered California say they got help from a Covered California representative.

Majorities of the recently insured say shopping for coverage was easy. For example, 77 percent of those with Medi-Cal and 66 percent of those with coverage through Covered California say it was easy to figure out if their income qualified them for financial assistance.  Similar shares of the recently insured overall also say it was easy to compare the monthly cost of coverage (74 percent), the services covered under the plans (65 percent), and the cost sharing requirements (64 percent). 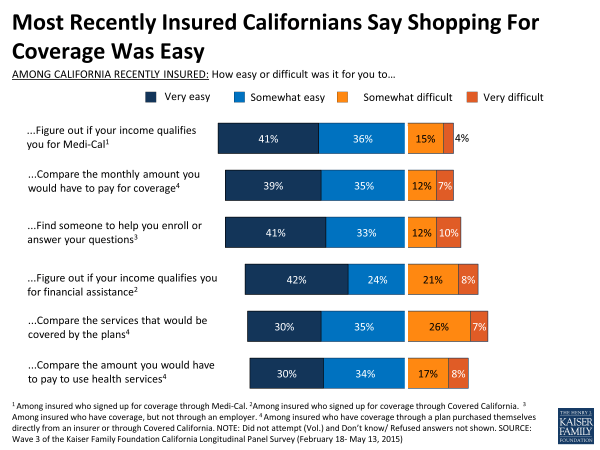 While the Medi-Cal program experienced a significant backlog in 2014 as it dealt with large numbers of applicants, most (58 percent) of California’s previously uninsured who say they are now covered by the program say it took less than a month to find out whether they were eligible for Medi-Cal. However, 19 percent say it took between one and two months and 1 in 5 (20 percent) say it took more than two months.

About 4 in 10 (38 percent) who have recently gained insurance through Covered California or reported they had it last year say they got a Health Insurance Marketplace Statement from Covered California containing information about their health insurance coverage for their 2014 taxes, and 27 percent say that the form showed they received a premium tax credit in 2014. However, it is possible that if an individual’s income or family size changes over the course of the year, they may end up owing money to the government. This may come as a surprise to some, as about half (49 percent) of those who say they currently have coverage through Covered California are unaware of this, and many (40 percent) who currently have a Covered California plan say their monthly income changed over the course of 2014, including 24 percent who say they had a big change in income.

Small percentages of California’s remaining uninsured report that they have contacted Covered California via web or phone; just 14 percent say they have visited the Covered California website and 7 percent say they have called the 1-800 number since November 15, 2014. This is a substantial change from last year, when about twice as many uninsured reported visiting the website (30 percent) or calling the 1-800 number (15 percent). 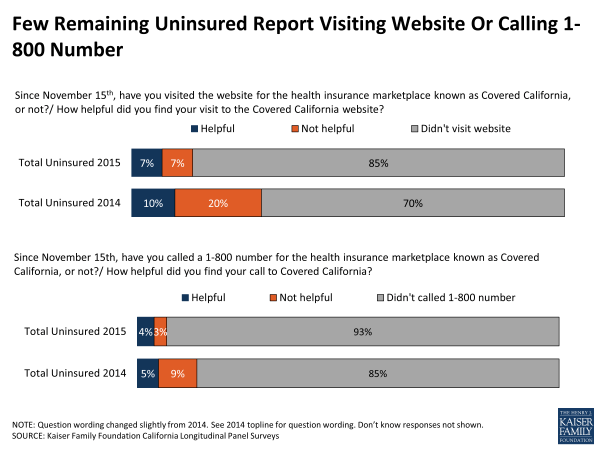