As the Economy Improves, the Number of Uninsured Is Falling But Not Because of a Rebound in Employer Sponsored Insurance

Changes in Coverage Among Workers

While the previous sections have looked at all nonelderly individuals, this section will look solely at nonelderly workers. Between 2007 and 2010 the number of workers declined by 4.9 million (Table 8). All of this decrease was experienced in small and medium size firms (<1,000 workers) or among the self-employed. Overall, there was a decline in the rate of ESI among workers from 72.5 percent to 69.6 percent, meaning 7.7 million fewer workers had ESI.  The percentage of workers without coverage increased from 17.6 percent to 19.6 percent, resulting in 2 million more uninsured workers. The decline in the rate of ESI coverage occurred in each firm size category; from 65.6 percent to 62.3 percent in small and medium firms and from 83.5 percent to 80.3 percent in large firms (Figure 16). There was an increase of almost 1 million uninsured workers in small and medium firms and 1.2 million in large firms. 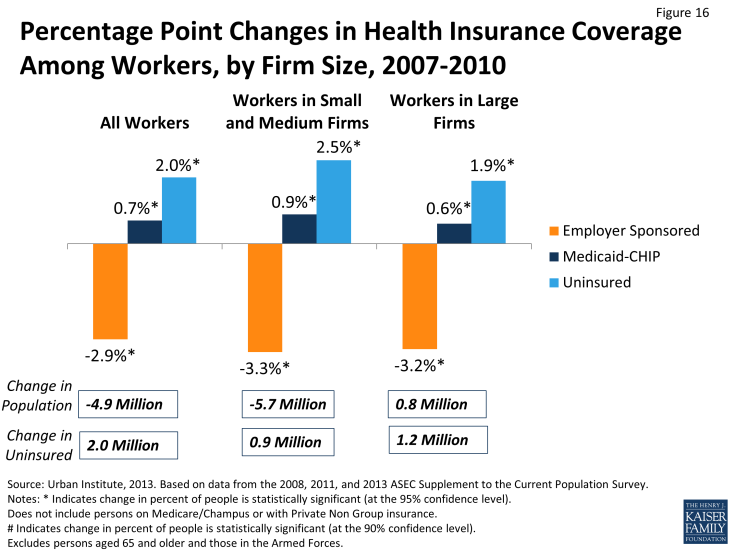 Between 2010 and 2012, the number of workers increased by 2.1 million, with 1.1 million more workers in small and medium sized firms and 1.0 million in large firms. The rate of ESI continued to decline for all workers by about half a percentage point (Figure 17).  All of the decline in the ESI rate was in small and medium size firms.  In large firms, the ESI rate increased slightly (0.8 percentage points). 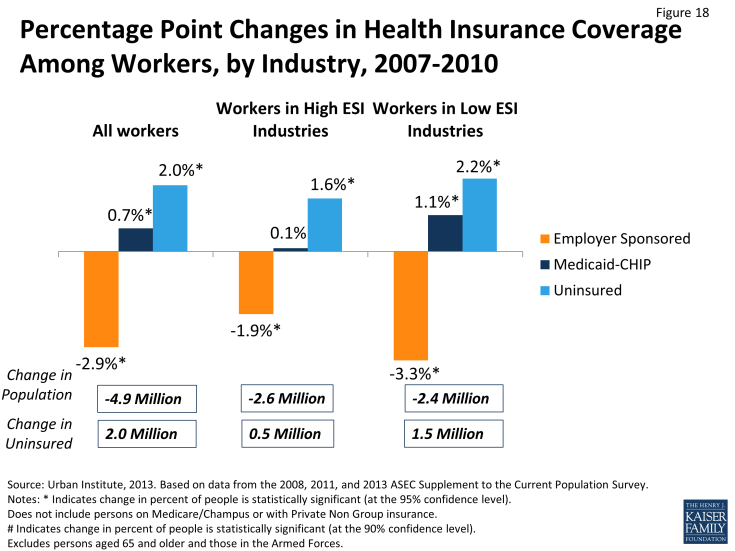 Thus, while there were some gains in coverage for some workers in more recent years, most of the job growth that has occurred since the peak of the Great Recession has been in industries or firms where the rate of ESI continues to decline. These trends indicate that economic recovery may not be accompanied by large gains in employer coverage.

Changes in Coverage Among the Nonelderly Population Conclusion