As the Economy Improves, the Number of Uninsured Is Falling But Not Because of a Rebound in Employer Sponsored Insurance

Changes in Coverage Among the Nonelderly Population

Figure 4 and Table 1 show the changes in health insurance coverage between 2007 and 2012. In the early years of the recession, from 2007 to 2010, the ESI rate fell dramatically from 64.3 percent to 59.7 percent. During this period, 9.5 million people lost ESI coverage. There was no significant change in the rate of private non-group coverage during this period. Some of the loss of ESI was offset by increases in Medicaid and Children’s Health Insurance Program (CHIP) coverage. There was an increase in Medicaid/CHIP coverage from 11.8 percent to 14.4 percent from 2007 to 2010, meaning 7.4 million more people had public coverage. The net result was an increase in the uninsured rate from 16.6 percent to 18.5 percent, an increase of 5.7 million individuals, between 2007 and 2010. Between 2010 and 2012, when the economy began to improve, the loss of health insurance coverage generally halted (Figure 4). There was no change in the non-group coverage rate. However, there was an increase of 0.5 percentage points in Medicaid and CHIP coverage, meaning 1.5 million people gained Medicaid or CHIP coverage. There were also an additional 1.1 million individuals who had ESI coverage, mostly young adults (data not shown). These modest increases in coverage resulted in the uninsured rate falling from 18.5 percent to 17.7 percent and the number of uninsured falling by 1.8 million. 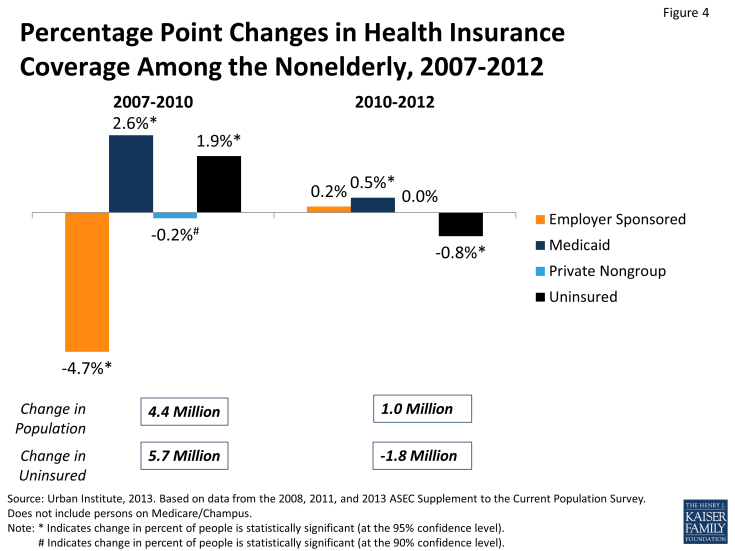 Changes in Coverage by Income 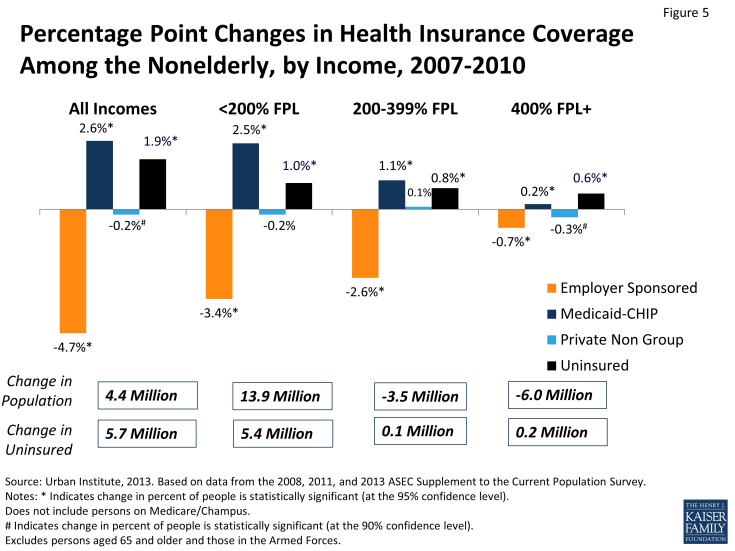 Figure 5: Percentage Point Changes in Health Insurance Coverage Among the Nonelderly, by Income, 2007-2010

Between 2010 and 2012, the most important changes (Figure 6) continued to occur among low-income individuals. The low-income population continued to increase, though not as much as in the previous three years.  Almost all of the increase in public coverage occurred among those with incomes below 200 percent FPL, as did virtually all of the reduction in the uninsured. Among those with incomes below 200 percent FPL, the number of uninsured fell by 1.9 million, accounting for the entire drop in the number of uninsured over this period. 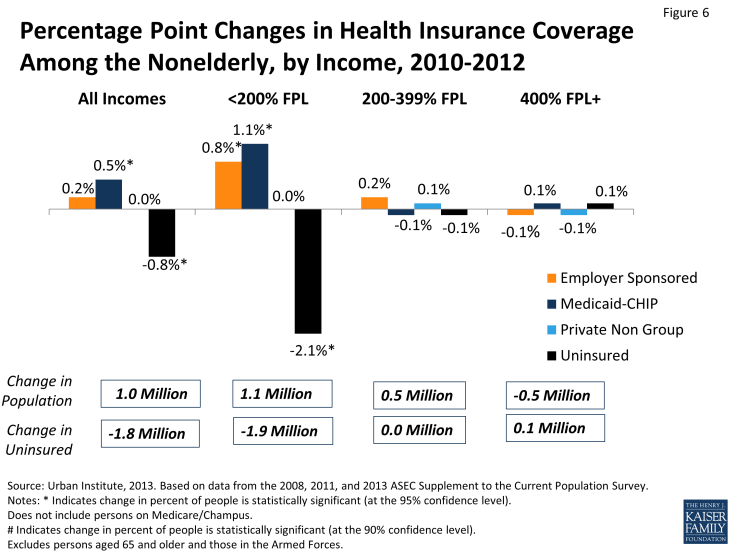 Figure 6: Percentage Point Changes in Health Insurance Coverage Among the Nonelderly, by Income, 2010-2012

Changes in Coverage by Age

Historically, coverage options for adults—particularly low-income adults—were more limited than those for children due to limits on Medicaid eligibility for adults. We next examine the changes in insurance coverage for adults and children separately, given the differences in availability of public coverage between the two groups.

There was a 4.6 percentage point decline in ESI among adults in the early years of the recession, which was partially offset by a 1.5 percentage point increase in Medicaid enrollment (Figure 7). Thus, the uninsured rate increased by 3.0 percentage points, from 19.1 percent to 22.0 percent. The increase in the number of uninsured adults was 6.4 million from 2007 to 2010. Most of the increase was among low-income adults, where the number of uninsured increased by 5.6 million (Table 2). Between 2010 and 2012, the overall ESI rate among adults did not change, but as a result of the increase in public and nongroup coverage, the uninsured rate declined by 0.8 percentage points, from 22.0 to 21.3 percent. The number of uninsured adults declined by 1.1 million. All of the decline was among low-income adults (Table 2). Changes in coverage among adults are affected by ACA provisions that allow young adults to stay on their parents’ policy. Because the policy was enacted in 2010, in Figure 8 we used 2009 as the base year because we wanted to make sure that we were able to clearly see the effects pre and post implementation of the provision. Although there appears to have been no real change in ESI coverage among adults between 2009 and 2012, there are in fact two offsetting trends that become apparent when ESI coverage among adults is broken out by age cohorts. Figure 8 and Table 3 show that among young adults (ages 19-26), ESI coverage increased by 4.3 percentage points from 2009 to 2012. In contrast, during this same period, individuals in the two oldest age groups (ages 35-54 and ages 55-64) experienced a continuing decline in ESI coverage. For those between the ages of 35 and 54 there was a statistically significant decrease in ESI coverage of 1.6 percentage points, and adults between the ages of 55 and 64 saw an even larger loss of ESI coverage of 2.6 percentage points. The overall rates of ESI among adults appear to be flattening out because the dramatic increase in ESI among young adults is masking the continuing decrease in ESI that is occurring among the two older age cohorts. The age-related trends underlying the seemingly constant rate of ESI among all adults have significant implications. The increase in ESI among young adults implies that the provision in the ACA that allow children up to age 26 to stay on their parents’ insurance as of September 2010 is having the intended effects; whereas the decrease in ESI among older individuals, ages 35-64, indicates that the bulk of the working force is continuing to experience significant declines in ESI coverage. 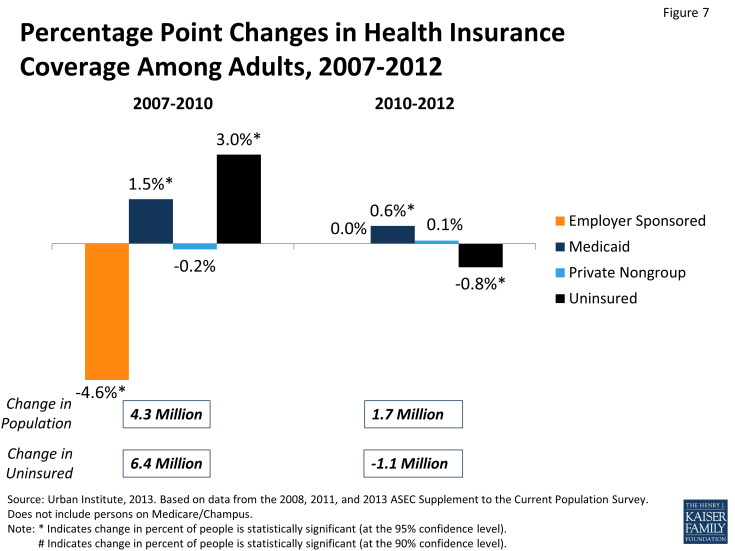 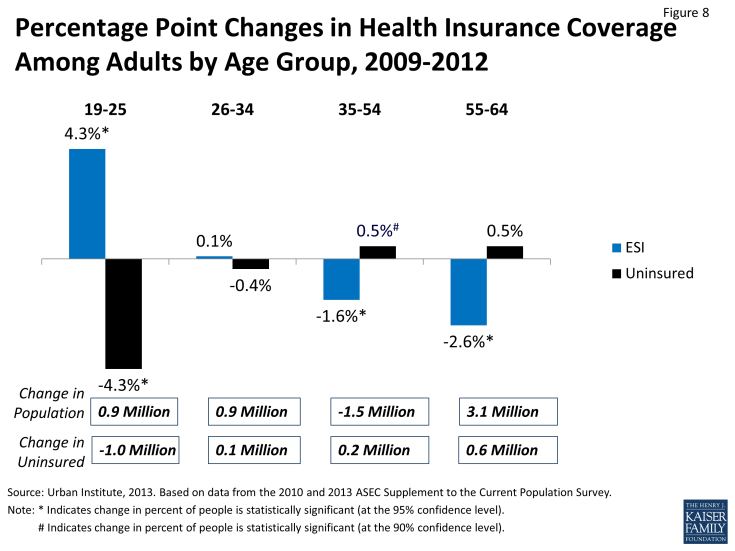 Patterns of coverage changes between 2007 and 2012 differ between children and adults. In the early years of the Great Recession, 2007 to 2010, the decline in ESI coverage was slightly larger for children than for adults: the ESI rate for children dropped 4.9 percentage points compared to 4.6 for adults. However, there was a much larger increase in Medicaid and CHIP coverage for children than there was for adults. Among children, Medicaid/CHIP coverage rose from 23.5 percent to 29.1 percent, or an increase of 4.4 million children (Figure 9). As a result, despite the severe recession and sharp decline in ESI coverage, the uninsured rate actually fell for children. Between 2007 and 2010, the number of uninsured children fell by 600,000. Between 2010 and 2012, there was a small but not statistically significant increase in the ESI rate among children, and there was a small increase in public coverage (Figure 9). Because of the small increases in public and private coverage, there was a small decline in the uninsured rate among children, from 10.1 percent to 9.2 percent, a decrease of 700,000 children. Thus, the uninsured rate for children declined in both periods throughout 2007 to 2012. 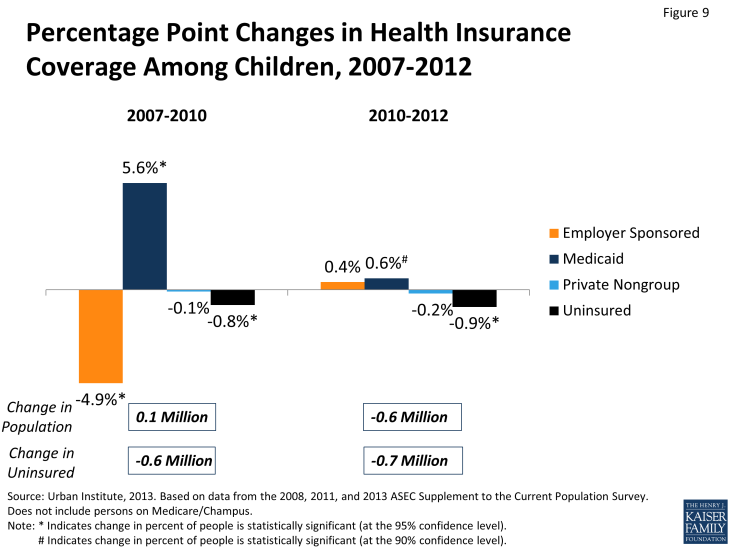 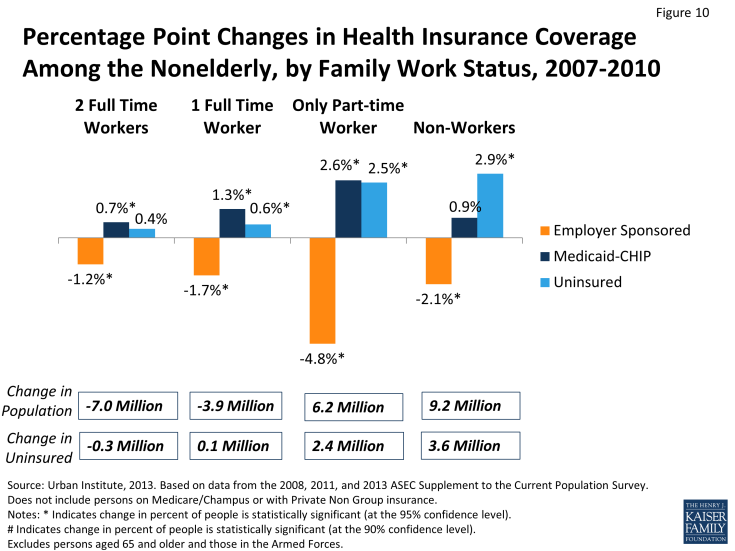 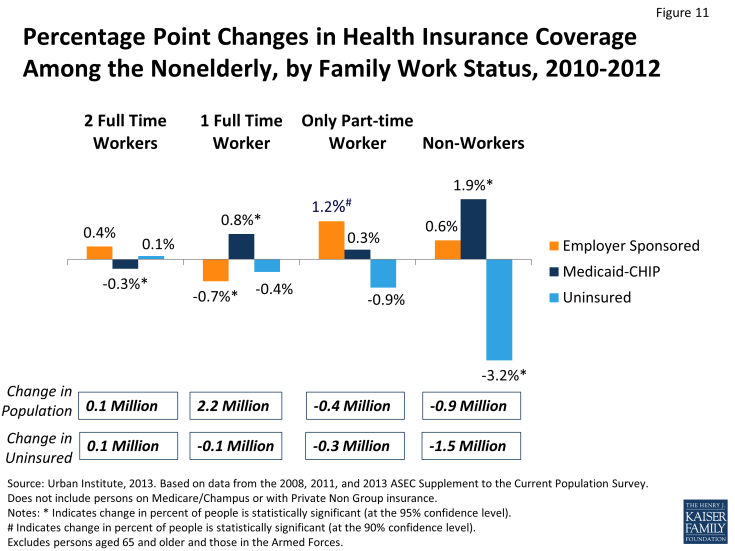 Changes in Coverage by Demographic Characteristics

In addition to declines in incomes and employment discussed in previous sections, there were also two important demographic changes that have occurred in recent years. The first is the decline in the white population and an increase in the number of Hispanics, blacks, and “others.” The “others” category includes American Indians, Alaska Natives, Asians, Pacific Islanders, and anyone with two or more races.. From 2007 to 2012, the white population declined by 6.1 million people while the number of Hispanics increased by 6.5 million and “others” by 4.5 million. The shift in demographics is important particularly since Hispanics have much lower rates of ESI and higher uninsured rates than whites. The “other” group tends to have coverage patterns that are much closer to that of whites. In addition, geographically, there was stagnant population growth in the Northeast, a decline in population size in the Midwest, and increases of 4.0 million and 2.0 million people in the South and West respectively. Thus, the population continued to shift toward regions in which there were lower ESI rates and higher likelihood of being uninsured. 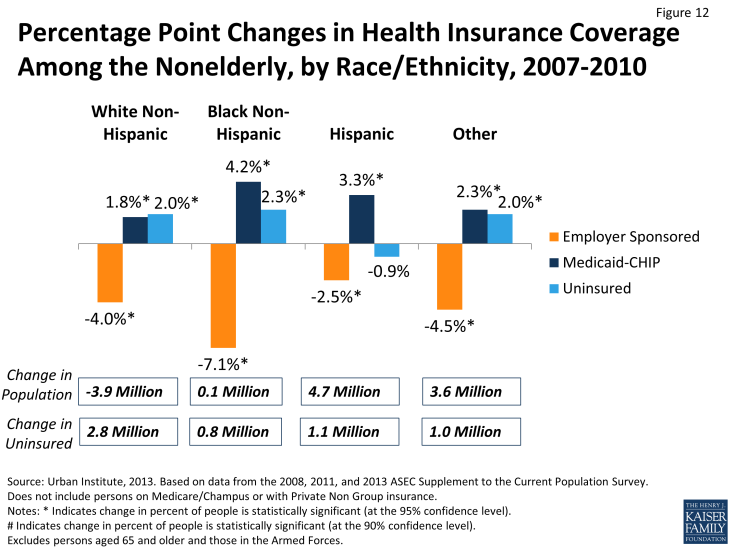 Figure 12: Percentage Point Changes in Health Insurance Coverage Among the Nonelderly, by Race/Ethnicity, 2007-2010 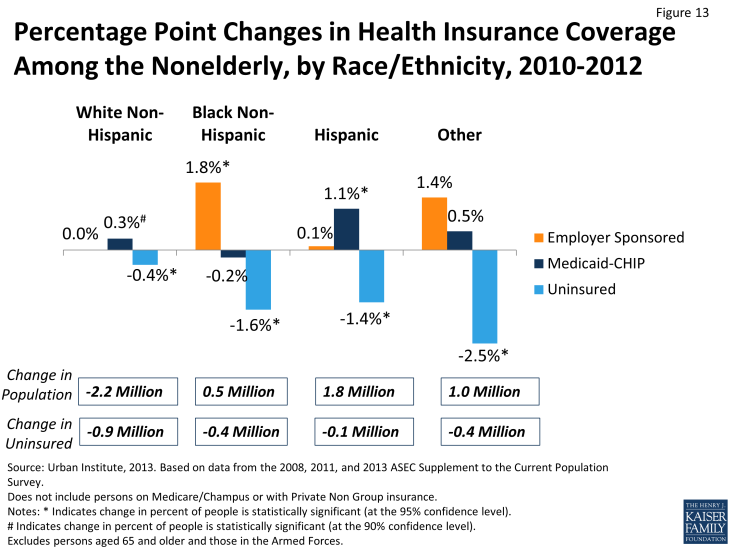 Figure 13: Percentage Point Changes in Health Insurance Coverage Among the Nonelderly, by Race/Ethnicity, 2010-2012 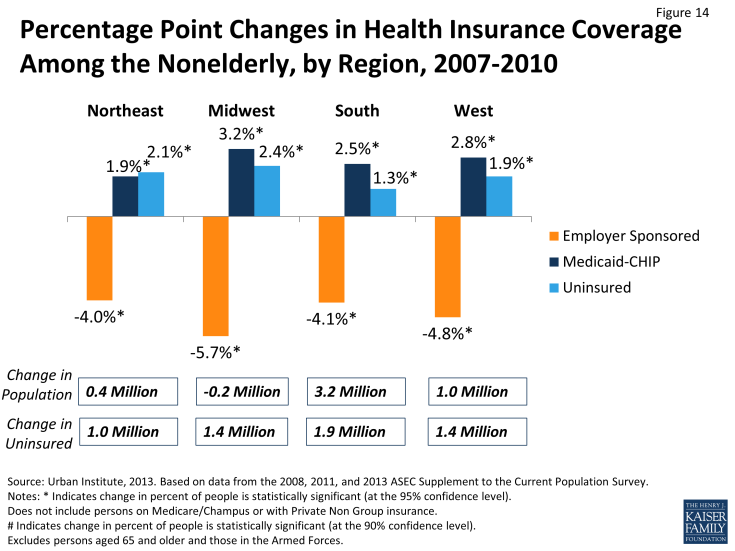 Figure 14: Percentage Point Changes in Health Insurance Coverage Among the Nonelderly, by Region, 2007-2010 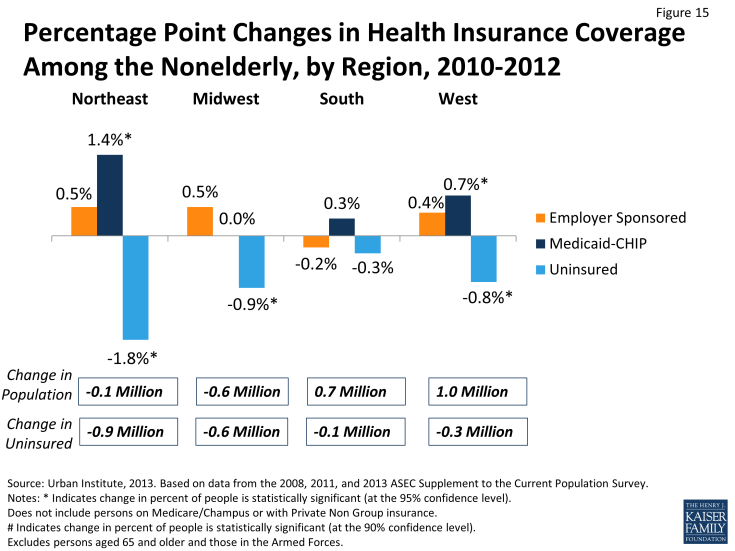 Figure 15: Percentage Point Changes in Health Insurance Coverage Among the Nonelderly, by Region, 2010-2012

The Improving Economic Picture Changes in Coverage Among Workers