In the negotiations leading to the passage of the Affordable Care Act (ACA), abortion coverage was one of the thorniest and most controversial of many controversial issues. Along with immigrant coverage, it was one of the final issues negotiated before the House vote. Initially, the House passed the Stupak-Pitts Amendment, which would have prohibited any plans in the Marketplaces from receiving federal subsidies if they covered abortion. The final law, however, included a compromise proposed by former Senator Ben Nelson of Nebraska which allows states to ban abortion coverage on their ACA Health Insurance Marketplace and requires plans that offer abortion coverage to segregate funds, assuring that no federal funds are used for abortion coverage. After the ACA was passed, President Obama also signed an executive order to emphasize that no federal funds can be used to pay for abortion beyond the Hyde limitations.

As of January 2015, 24 states1 have enacted laws banning qualified health plans available through the Marketplace from including abortion coverage to varying degrees. Some states have exclusions that mirror the Hyde Amendment restrictions (only permitting coverage for abortions from pregnancies that result from rape or incest, or that are a threat to the life of the pregnant woman). Others have even narrower requirements, limiting abortion coverage only to life threatening circumstances and prohibiting coverage in cases of rape or incest, and in some state it is banned altogether regardless of the circumstance (Louisiana and Tennessee).

Both sides of the abortion debate are unsatisfied with these rules and are carefully watching the law’s implementation. While it is clear that there is no abortion coverage available to women eligible for subsidies in the states that have barred it in the Marketplace, there has been a lot of attention about how difficult it is for consumers in the remaining states to determine whether plans include abortion coverage or not. This lack of transparency was the impetus for a U.S. General Accounting Office review of the availability of abortion coverage in 2014 Marketplace plans. 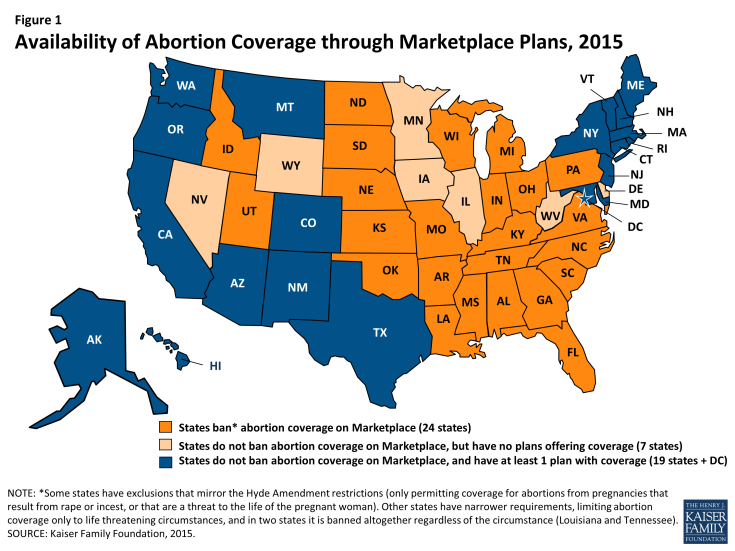 As a combined result of the state laws and insurance company choices, women in 31 states do not have access to insurance coverage of abortions through a Marketplace plan – the only place where consumers can receive tax subsidies to help pay for the cost of health insurance premiums

Among the estimated 3.1 million uninsured women of reproductive age who are income eligible for tax credits, 40% (1.26 million) have the option to enroll in a Marketplace plan that offers abortion coverage. Six in ten women (60%), however, do not have the option to obtain abortion coverage through their Marketplace – 56% (1.76 million) live in states that have banned abortion coverage available through Marketplace health plans and 4% (123,000) live in a state without a ban but that does not offer any plans that cover abortion (Figure 2).  For women who seek abortions, the absence of this coverage can result in sizable out-of-pocket costs. A clinic-based abortion at 10 weeks’ gestation is estimated to cost between $400 and $550, whereas an abortion at 20-21 weeks’ gestation is estimated to cost $1,100-$1,650 or more.2 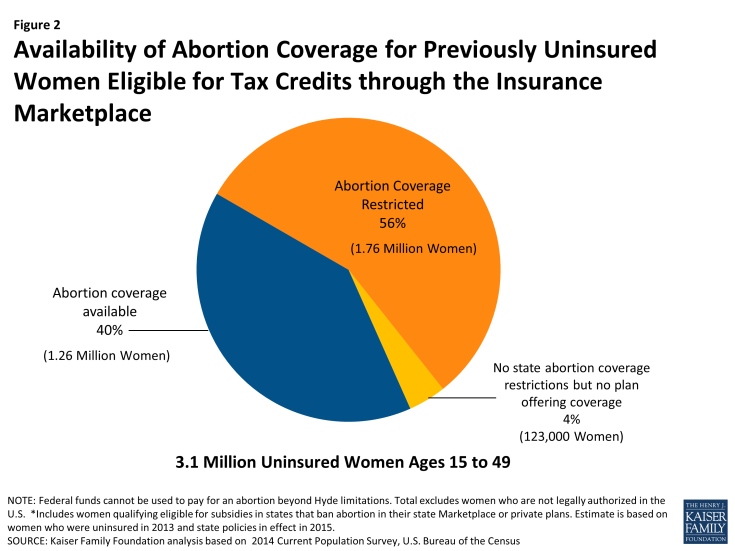 As the debate on abortion continues, both sides remain dissatisfied with how the law is being implemented with regard to abortion coverage. Given the polarized nature of the abortion debate in this country, the issue of access to abortion coverage will continue to be a focus of policy at both the state and national level, and increasingly shaped by choices made not just by states and federal policy makers but also by health insurers.