In September 2013, Arkansas became the first state in the country to secure Section 1115 demonstration waiver approval from the Centers for Medicare and Medicaid Services (CMS) to require adults newly eligible for Medicaid with income up to 138 percent of the federal poverty level (FPL, $16,243 per year for an individual in 2015) who are not medically frail to enroll in private health plans offered through the Arkansas Marketplace.1  (Newly eligible adults who are medically frail are served through the state’s fee-for-service system rather than the demonstration, as discussed in more detail below.) Arkansas’s demonstration uses Medicaid funds as premium assistance to purchase Marketplace coverage for parents with income from 17-138 percent FPL and childless adults from 0-138 percent FPL. These newly eligible adults are Medicaid beneficiaries and must be provided with all Medicaid benefits and cost-sharing protections, either through a Marketplace plan or via a “wrap” through the state’s Medicaid program. The approach, often referred to as the “private option,” was designed by the state with goals of increasing access to care by placing beneficiaries in private health plans with a robust provider network; reducing the effects of churning as enrollees move between Medicaid and Marketplace coverage as their income fluctuates; and reinforcing the state’s broader health care delivery system reform efforts. The private option expansion now covers close to 220,000 newly eligible adults in Arkansas, and is authorized by CMS through the end of 2016. An additional 25,000 newly-eligible adults are covered through the state’s fee-for-service system, bringing the total number covered to 245,000 as of June 30, 2015.2

This issue brief offers an early look at implementation of the private option expansion, drawing on a dozen interviews with a broad array of Arkansas stakeholders and early data on coverage, reduced uncompensated care costs, and other topics. Interviews were conducted in April and May 2015 with state officials, providers, insurance carriers, and beneficiary advocates (The interview guide is contained in Appendix A). The findings also are informed by data and reports from the state Medicaid agency and the state insurance department; state legislative oversight committees; and CMS. The brief provides a short history of the private option expansion; presents key findings along several dimensions, focusing on the implications of the model on beneficiaries; and discusses lessons for other states and prospects for the future of the private option expansion in Arkansas.

History of the Private Option Expansion

Arkansas was the first state to consider mandating enrollment in Marketplace plans for adults newly eligible for Medicaid. While states have a long history of using Medicaid funds to purchase employer-based coverage for Medicaid beneficiaries, it was not until passage of the Affordable Care Act (ACA) that states began to look closely at purchasing individual insurance policies with Medicaid funds. Prior to the ACA’s insurance market reforms, premium assistance models in the individual market were challenging for state Medicaid programs to administer. Insurers were not obligated to issue policies; they could impose pre-existing condition exclusions; and they could charge higher premiums for people with extensive health care needs, making it impossible or prohibitively expensive for states to buy individual policies for Medicaid beneficiaries. The individual market also lacked standardized plans and benefit design. After ACA reforms to the individual insurance market eliminated many of these hurdles, CMS issued regulations to give states the option to use Medicaid funds for voluntary enrollment in premium assistance, including for Marketplace plans, without requiring waiver approval.3 In March 2013, CMS released guidance indicating that it would consider approving a limited number of demonstrations that required Medicaid beneficiaries to enroll in Marketplace plans, within certain guidelines.4  The private option expansion was designed by state legislative leaders, then-Governor Mike Beebe, and state agency leadership in the second half of 2012 and 2013. At the time, it was clear that the Arkansas legislature would not approve a traditional Medicaid expansion. The Arkansas constitution requires a 75 percent super majority to approve initiatives requiring appropriations, and there were not enough votes in favor of funding a traditional Medicaid expansion. To move forward, the state required an alternative approach. (Figure 1) 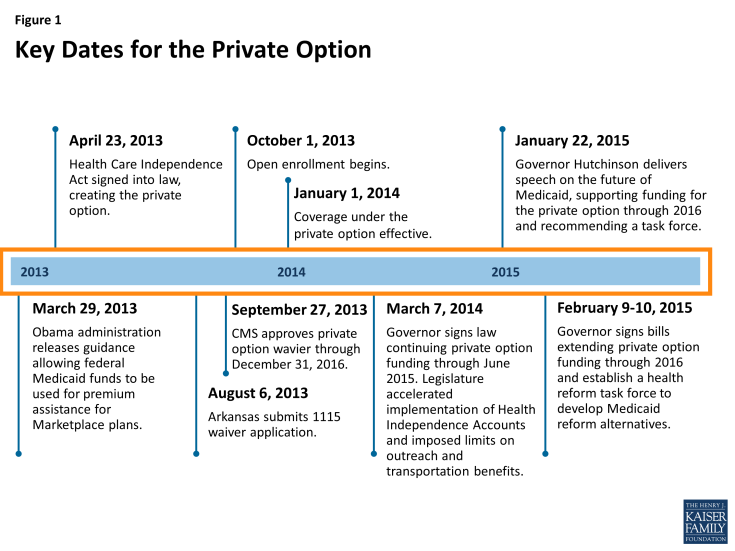 After the legislature authorized expansion through the private option, close collaboration was required among state officials and other stakeholders to implement the program. The Arkansas state legislature debated and ultimately approved authorizing legislation, and the private option expansion was signed into law by Governor Beebe on April 23, 2013.5  In some respects, though, the detailed work of developing the private option expansion was just beginning. Implementation required a Section 1115 Medicaid waiver from CMS, primarily because Arkansas sought to require beneficiaries to enroll in Marketplace plans. The state submitted its waiver application in August 2013. In relatively short order, but, still less than a week before the launch of the initial open enrollment period for Marketplace coverage, Arkansas received waiver approval on September 27, 2013.6

The administrative complexity of operationalizing the private option expansion in a relatively short timeframe required the state to navigate a variety of implementation issues on the state and federal levels. While waiver negotiations were ongoing, the state also was handling other implementation issues, such as working with insurers to develop their rates for participating in the Marketplace; building the enrollment portal that beneficiaries would use to select a Marketplace plan; and developing educational materials and notices for beneficiaries. The initiative requires the state insurance department to oversee the Marketplace plans that serve newly eligible adults,7 while the state Medicaid agency retains ultimate responsibility for ensuring that beneficiaries are provided with coverage that meets federal Medicaid standards. As a result, implementation required what stakeholders described as an unprecedented level of cooperation between the state Medicaid agency and state insurance department. The state began accepting applications for the new program on October 1, 2013, and coverage began on January 1, 2014.

Since 2013, the private option expansion has continued to undergo changes. The Arkansas Senate approved continued funding of the private option expansion in February 2014, but the House voted five times before the required super majority reauthorized it in early March 2015. The final legislation included a ban on using government money to fund outreach and enrollment assistance for health coverage broadly (not just for private option enrollees);8 the acceleration of implementation of new Health Independence Accounts through which private option enrollees would pay cost-sharing; and changes to the state’s non-emergency medical transportation benefit.9

The private option expansion’s future is currently under discussion. On January 22, 2015, the new Governor, Asa Hutchinson, gave a speech outlining his thoughts on the private option. The Governor, who inherited the private option from the earlier Democratic Administration, described the private option as innovative and rooted in market principles. He explained it has offered important benefits to Arkansas residents and the state’s hospitals, while also calling on the legislature to establish a task force to explore more wide-ranging reforms of the state’s Medicaid program.10  In response, the legislature extended funding for the private option through 2016 when the initiative is slated to sunset, and created the Legislative Health Reform Task Force, which will make recommendations by December 2015 for modernizing the state’s overall Medicaid program. The Governor also issued an executive order creating a Medicaid Advisory Committee, headed by the state’s surgeon general, that will provide input into this process.