A companion article to this report, entitled “Medicare Per Capita Spending By Age And Service: New Data Highlights Oldest Beneficiaries” has been published in the journal Health Affairs.

In the context of ongoing discussions about the federal budget and national debt, policymakers, experts, and the media have called attention to the nation’s growing aging population and the implications for Medicare and the federal budget.  At the same time, geriatricians and other providers who care for older patients are giving greater attention to the question of how best to meet the needs of an aging population.  Between 2010 and 2050, the United States population ages 65 and older will nearly double, the population ages 80 and older will nearly triple, and the number of nonagenarians and centenarians—people in their 90s and 100s—will quadruple.1  The aging of the population has important implications for future Medicare spending because beneficiaries ages 80 and older account for a disproportionate share of Medicare expenditures.  According to the Congressional Budget Office, population aging is expected to account for a larger share of spending growth on the nation’s major health care programs through 2039 than either “excess spending growth” or subsidies for the coverage expansions provided under the Affordable Care Act.2

To inform discussions about Medicare’s role in providing coverage for an aging population and to assess the relationship between Medicare spending and advancing age, this report takes an in-depth look at patterns of Medicare spending by age, overall and by type of service.3  Using the most current Medicare spending data available for beneficiaries in traditional Medicare in 2011 and trends since 2000, the analysis explores the following questions:

This analysis is based on data from a 5 percent sample of Medicare claims from the Chronic Conditions Data Warehouse (CCW) of the Centers for Medicare & Medicaid Services (CMS) from 2000 to 2011 (the most recent year available when this analysis was conducted) that includes all Medicare-covered claims for services covered under Parts A, B, and D.  The analysis excludes beneficiaries who are age 65 because some of these beneficiaries are enrolled for less than a full year; therefore, a full year of Medicare spending data is not available for all people at this year of age.  The analysis focuses on Medicare beneficiaries over age 65 rather than younger adults who qualify for Medicare because of a permanent disability to develop a better understanding of the relationship between Medicare spending and advancing age.

Medicare Per Capita Spending By Age Among Traditional Medicare Beneficiaries Over Age 65 in 2011 and Trends, 2000-2011 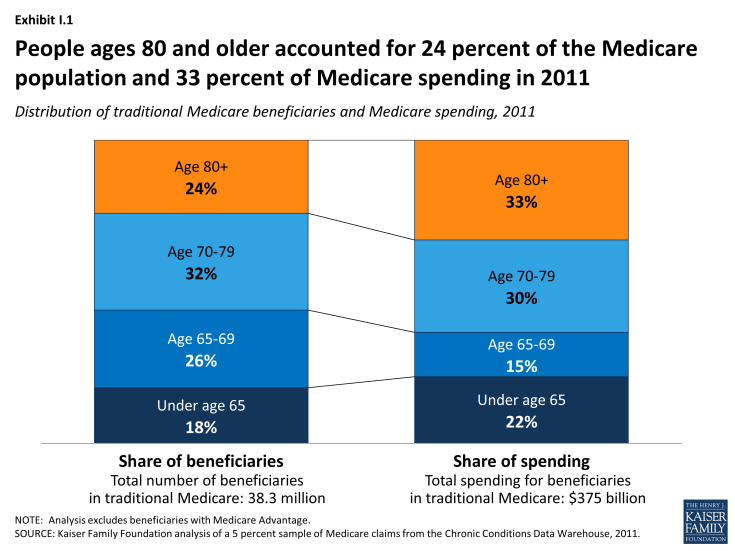 Exhibit I.1: People ages 80 and older accounted for 24 percent of the Medicare population and 33 percent of Medicare spending in 2011 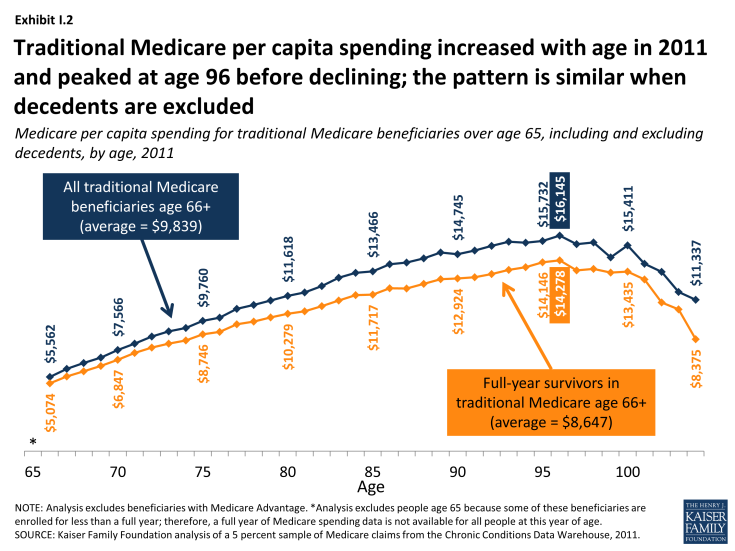 Exhibit I.2: Traditional Medicare per capita spending increased with age in 2011 and peaked at age 96 before declining; the pattern is similar when decedents are excluded

Patterns in Traditional Medicare Per Capita Spending for Selected Medicare-covered Services in 2011 and trends, 2000-2011 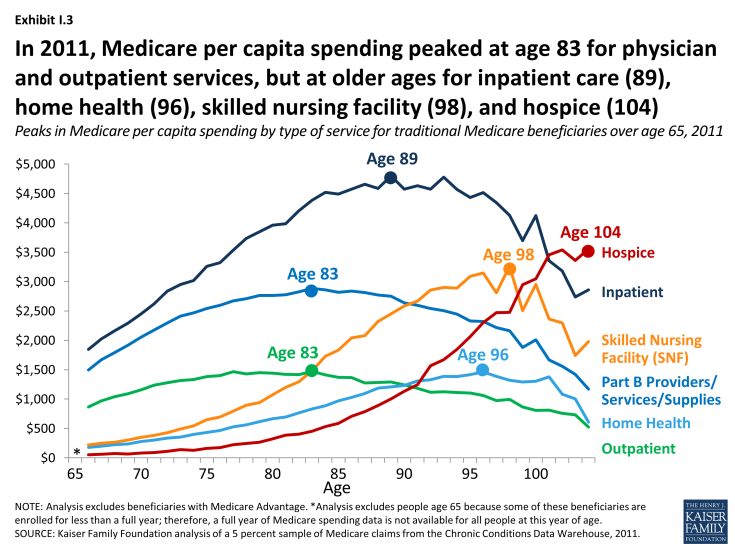 This analysis shows Medicare per person spending rising steadily with age, more than doubling between ages 70 and 95 in 2011, and peaking at age 96, before declining for the relatively small number of beneficiaries at relatively older ages.  The cost of care for Medicare beneficiaries who died in 2011 contributes to higher average per capita Medicare costs at all ages, but does not alter the pattern of per capita spending nor does it affect the peak age of Medicare spending in 2011.  And over time, Medicare per capita spending has peaked at older ages, from age 92 in 2000 to age 96 in 2011, based on inflation-adjusted dollars.

As adults live into their 80s and beyond, they are more likely to live with multiple chronic conditions and functional limitations, and this combination (compared to having chronic conditions only) is associated with a greater likelihood of emergency department visits and inpatient hospitalizations as well as higher Medicare spending for inpatient hospital, skilled nursing facility, and home health services.5  Thus, it is not surprising that Medicare per capita spending is higher, on average, for older beneficiaries compared to those in their 60s and 70s.  At the same time, the pattern of increasing per capita spending until beneficiaries are in their mid-90s raises questions as to whether beneficiaries are getting the appropriate mix of services as they age and whether more could be done to improve the management and delivery of medical care for aging Medicare beneficiaries.

The Affordable Care Act (ACA) launched several payment and delivery system reforms that could alter patterns of care and spending for people on Medicare.  Several of these initiatives aim to maintain or improve the quality of patient care and lower costs by reducing unnecessary care, managing care for high-need, “at risk” patients, and treating beneficiaries in the most appropriate (least cost) setting.6  The ACA also included provisions that aim to reduce unnecessary, preventable hospitalizations, better manage transitions following hospitalizations, and improve care management for beneficiaries who are dually eligible for Medicare and Medicaid.7  Recently, the Centers for Medicare & Medicaid Services (CMS) announced it would provide payments to physicians who manage care for beneficiaries with two or more chronic conditions.8  These efforts potentially could lower costs and improve care for Medicare patients, including the oldest old.

As the U.S. population ages, the increase in the number of people on Medicare and the aging of the Medicare population are expected to increase both total and per capita Medicare spending.  The increase in per capita spending by age not only affects Medicare, but other payers as well.  In fact, other studies have documented increases in both Medicaid and out-of-pocket spending by age, primarily attributable to the cost of long-term services and supports that are not covered by Medicare.9,10  Further work is needed to better understand the social, medical, and long-term care needs of older Americans and how best to address those needs.  Focusing on ways to improve the management and coordination of care for high-need, high-cost patients, many of whom are among Medicare’s oldest beneficiaries, will be essential to meet the needs of an aging population.

Section 1: Medicare Per Capita Spending By Age Among Traditional Medicare Beneficiaries Over Age 65, 2011 and Trends, 2000-2011