A new report from the Kaiser Family Foundation takes a detailed look at per person Medicare spending by age and by service among the nearly 30 million people covered by traditional Medicare in 2011.  This analysis examines the relationship between Medicare per person spending and advancing age, providing new data to inform ongoing federal budget discussions and efforts to improve care for an aging population. Medicare beneficiaries age 80 and older account for a disproportionate share of Medicare spending and are expected to triple as a share of the 65+ population by 2050.

Key findings from the report, The Rising Cost of Living Longer:  Analysis of Medicare Spending by Age for Beneficiaries in Traditional Medicare, include: 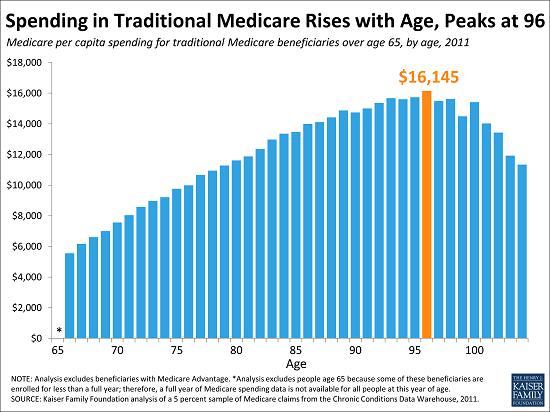 These key findings are also discussed in a companion article published as a web first today in the journal Health Affairs titled, Medicare Per Capita Spending By Age and Service: New Data Highlights Oldest Beneficiaries. The analysis is based on 2000-2011 Medicare claims data from the Centers for Medicare and Medicaid Services’ Chronic Conditions Data Warehouse. The study examines spending among beneficiaries in traditional Medicare because comparable spending data are not available for beneficiaries enrolled in Medicare Advantage.  The spending figures in the analysis do not include personal or Medicaid-related spending on long-term care.

The full report, including a discussion of methodology and a link to the Health Affairs article, is available online. More Kaiser resources on the Medicare program can be found at kff.org.