The disparate impacts of the COVID-19 pandemic on people of color have exposed and compounded underlying racial/ethnic disparities in health and health care. These disparities include longstanding higher uninsured rates among people of color that contribute to barriers to care and, ultimately, worse health outcomes. The Affordable Care Act (ACA) coverage expansions, including the Medicaid expansion to low-income adults, provide an opportunity to reduce disparities in coverage, which research suggests may contribute to reductions in disparities access to care and health outcomes.

This issue brief builds on a previous literature review that broadly investigated the effects of Medicaid expansion by examining how the expansion has affected racial disparities in health coverage, access to care, health outcomes, and economic outcomes. It is based on a review of 65 studies published beginning in January 2014 (when the coverage provisions of the ACA went into effect) through July 2020. This brief groups outcomes into four broad categories: coverage; access to and use of care; health outcomes and quality of care; and economic measures. Key findings include (Figure 1): 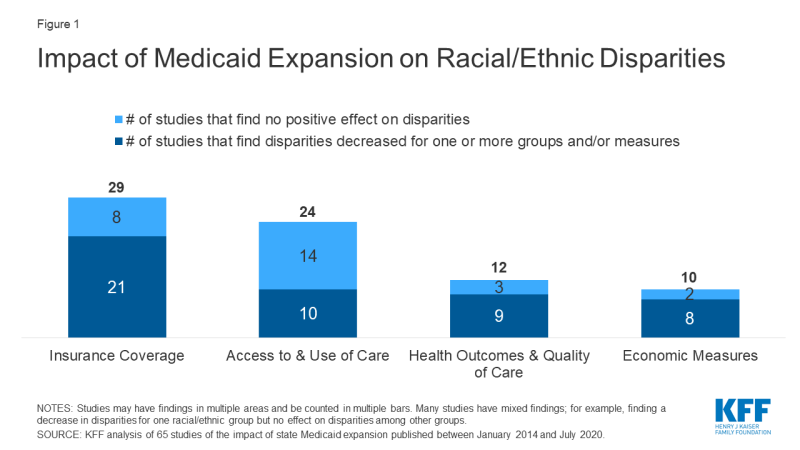 Together these findings illustrate that Medicaid expansion has contributed to reductions in longstanding racial disparities in health coverage. They further suggest that, while increased coverage can help improve access to care and contribute to improvements in health, coverage alone is not enough to eliminate disparities in these measures. This finding reflects that a broad range of social and economic factors beyond health coverage influence and drive health. As such, the findings point to the importance of ongoing efforts to address health disparities considering a broad array of factors within and outside the heath sector, including historic and ongoing racism and discrimination.