People With HIV in Non-Medicaid Expansion States: Who Could Gain Coverage Eligibility Through Build Back Better or Future Expansion? 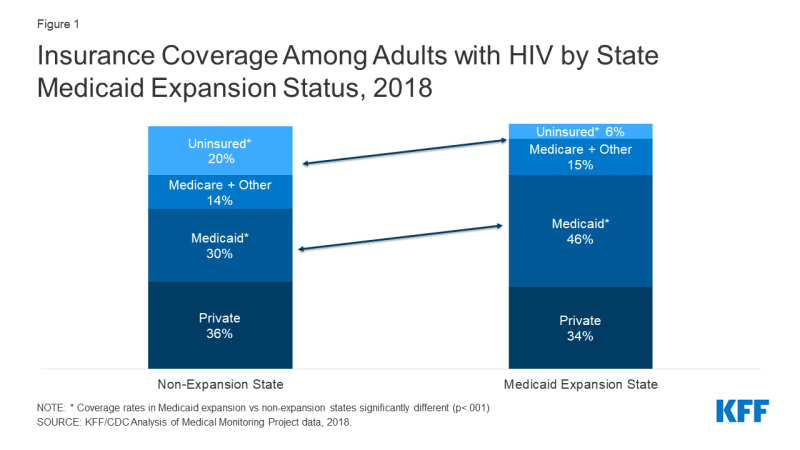 One provision in the Build Back Better Act (BBBA), as passed by the House of Representatives, aims to temporarily close the coverage gap, although its prospects are uncertain as negotiations continue in the Senate. It would temporarily create new coverage opportunities, including by providing a low-cost (with zero premiums) marketplace alternative for those with incomes below 100% FPL who are not otherwise eligible for Medicaid. The BBBA includes a provision to encourage states that have already expanded to maintain that status. In addition, the BBBA would also enhance cost-sharing subsidies provided under the American Rescue Plan Act (ARPA) to those with incomes between 100-138% FPL.

In this analysis, we explore the implications of the BBBA’s current coverage provisions for people with HIV in select non-expansion states. We estimate the size of the population that could gain eligibility as well as their socio-demographic characteristics and examine their affordability barriers, compared to people with HIV overall. We also discuss the implications of such policy changes for the Ryan White HIV/AIDS Program, the nation’s HIV safety-net program. To do so, we used data from the Centers for Disease Control’s and Prevention’s (CDC) Medical Monitoring Project (MMP), a surveillance system which produces national and state-level representative estimates of behavioral and clinical characteristics of adults with diagnosed HIV in the United States. The MMP sample includes five of the twelve non-expansion states –  Florida, Georgia, Mississippi, North Carolina, and Texas – which together account for about 84% of people living with diagnosed HIV in non-expansion states.

We defined the group who could benefit from key BBBA coverage provisions as non-elderly adults with HIV with incomes below 139% FPL who were either uninsured or had health coverage other than from Medicaid or Medicare. Notably, this is the same population that could gain eligibility for coverage if their states expanded their Medicaid programs. (See Methodology for detail.)

Overall, we find that an estimated 55,132 (or 23%) of non-elderly individuals with HIV in sampled non-expansion states could gain eligibility for new or enhanced subsidies under the BBBA. This is also the population that could gain Medicaid eligibility, if these states expanded their programs. The share ranges by state, from an estimated 18% in both North Carolina and Georgia to 28% in Texas. (See Table 1.)

How this 23% could be impacted by BBBA is as follows. As noted, the BBBA would provide those with incomes below 100% FPL, including uninsured people in the coverage gap, with marketplace subsidies and cost-sharing assistance, making private insurance premiums free and cost-sharing minimal. We estimate that approximately 47,078 (or 16%) of non-elderly adults with HIV in the sampled non-expansion states would become eligible for this provision. BBBA would also enhance subsidies for those 100-138% FPL and we estimate beyond this 16%, an additional 7% of non-elderly people with HIV in non-expansion states would be eligible for these enhanced subsidies. Notably, BBBA provisions are temporary, and set to expire in 2025 unless renewed. Under a scenario where all sampled states expanded their Medicaid program, the full 23% of non-elderly people with HIV could gain Medicaid eligibility.

The Ryan White HIV/AIDS Program plays a key role in the lives of about half of all people with HIV in the U.S., and an especially important role in providing HIV care and treatment for those in non-expansion states in the coverage gap. We find that seventy percent (70%) of those who could gain new coverage opportunities under BBB or Medicaid expansion currently receive support from Ryan White, compared to 46% of non-elderly people with HIV overall, with Ryan White supporting a range of outpatient HIV services including medications although it cannot pay for non-HIV care. As such, if this group gains coverage, it could mean that state programs could shift limited Ryan White resources to expand support services that were not possible to finance in the past. In fact, people with HIV with all insurance coverage types and Ryan White experience higher rates of sustained viral suppression (an indicator for health and preventing transmission) than those with only insurance coverage and no support from the program, in large part due to these supportive, wrap around services.

We estimate that if the BBBA, as passed by the House, was enacted almost a quarter (23%) of non-elderly people with HIV in select non-expansion states could become eligible for these new coverage opportunities. This is the same share estimated to become eligible through Medicaid expansion which could be a potentially more stable coverage pathway given the currently time limited nature of the BBBA. Given high rates of uninsurance among people with HIV in non-expansion states and the prevalence of problems with medical bills, coverage gains could improve health access and affordability. And since people with HIV in non-expansion states are disproportionally people of color, new coverage opportunities could also help to address health disparities at the intersection of HIV and race/ethnicity. Coverage expansions through either pathway (the BBBA or Medicaid expansion) may also relieve the Ryan White Program from financing HIV care and treatment, allowing it to provide more robust support services, which could lead to improved care outcomes for people with HIV. In addition, a shift to coverage could mean that those previously in without affordable insurance could access care for non-HIV care needs that in the past would have not been addressed through the Ryan White Program.

The authors wish to thank Dr. Sharoda Dasgupta, Dr. Linda Beer, Tamara Carree, and Stacy Crim of the Centers for Disease Control and Prevention (CDC), who were instrumental in this work in providing access to data, guidance, and conducting statistical analysis.

Data on people with HIV are based on 2018 and 2019 data cycles from the Medical Monitoring Project (MMP), a Centers for Disease Control and Prevention (CDC) surveillance system which produces national and state-level representative estimates of behavioral and clinical characteristics of adults with diagnosed HIV in the United States.

Data used in this analysis were collected via telephone or face-to-face interviews and medical record abstractions during the following periods:

We estimated weighted percentages of individuals with the following types of health care coverage: no coverage (uninsured), private insurance (with breakouts for employer coverage and marketplace coverage), Medicaid, Medicare, and other. Because respondents in MMP may indicate more than one type of coverage, we relied on a hierarchy to group people into mutually exclusive coverage categories. After removing people with any Medicaid or Medicare coverage, we categorized people into coverage according to the following hierarchy:

In most cases, this hierarchy classified individuals according to the coverage source that served as their primary payer. People who did not report any of the sources of insurance coverage were classified as uninsured.

People with HIV in non-expansion states were identified as potentially eligible for BBB assistance or Medicaid based on their state of residence, if they were under the age of 65, had incomes between 0-138% FPL, and had insurance other than Medicare or Medicaid or were uninsured. Build Back Better eligibility was also assessed to capture the estimated number and share in the coverage using the same criteria but with the poverty threshold being 0-99% FPL.

Although MMP is based on a probability sample that allows for reporting of nationally representative estimates of characteristics among people with HIV, people were not sampled with respect to Medicaid expansion status of their state of residence. Therefore, the Medicaid expansion and non-expansion coverage data presented here are representative only of the subset of states sampled that fell into each group. Insurance coverage data is self-reported by respondents and not verified. Receipt of Ryan White support is also self-reported. By relying on a hierarchy to group individuals into coverage categories, it is possible individuals were grouped into a coverage category that was not their dominant payer over the course of a year. We were unable to identify immigrants who would be ineligible for Medicaid based on immigration status but previous work suggests this percentage is likely small and would not have substantially impacted estimates. In addition, some people who are currently uninsured may already be eligible for Medicaid or other coverage. However, we expect that share to be low for several reasons. First, even prior to Medicaid expansion opportunities becoming available, the disability pathway was the most common way people with HIV became eligible for Medicaid coverage. All five states sampled use autoenrollment for people with SSI therefore limiting those eligible but not enrolled in the program. Second, Ryan White acts of payer of last resort and grantees are required to regularly assess clients for eligibility for health coverage. Given that 82% of uninsured people receive Ryan White support and the majority of the potentially eligible group identified here are uninsured, the program would likely have already identified potential coverage opportunities and assisted with enrollment, including through Medicaid, where possible. It is also important to note that respondents may not be aware of all the services they receive that are paid for by the Ryan White HIV/AIDS Program (the program provides funding directly to service organizations in many cases) and therefore, the estimates of the number of individuals who receive Ryan White HIV/AIDS Program services is likely an underestimate.