As of October 16, Congress has enacted four emergency supplemental funding bills to address the COVID-19 pandemic, which collectively provide almost $3.2 billion for the global response. Of this amount, approximately $2.4 billion (75%) was designated for country, regional, and worldwide programming efforts through the State Department ($350 million), the U.S. Agency for International Development (USAID) ($1.24 billion), and the Centers for Disease Control and Prevention (CDC) ($800 million); the remainder was for operating expenses, including the evacuation of U.S. citizens and consular operations. With negotiations between Congress and the Administration over a fifth supplemental package on shaky ground, we examined the status of global COVID-19 country, regional, and worldwide funding to assess how much has been committed to date and where it has been directed.

Data were available to analyze virtually all (97%) of the $1.59 billion provided to State and USAID, specifically the funding that had been committed as of August 21, 2020.1 The data also included $99 million in existing funding provided by USAID through its Emergency Reserve Fund for Contagious Infectious Disease Outbreaks (ERF),2 bringing the total to approximately $1.64 billion. Data were not available on funding provided to CDC, including data disaggregated by country or region.3

The analysis shows that:

See Figure 3. These ten countries each received at least $35 million and together account for more than a quarter of funding ($444.3 million) committed by State and USAID. 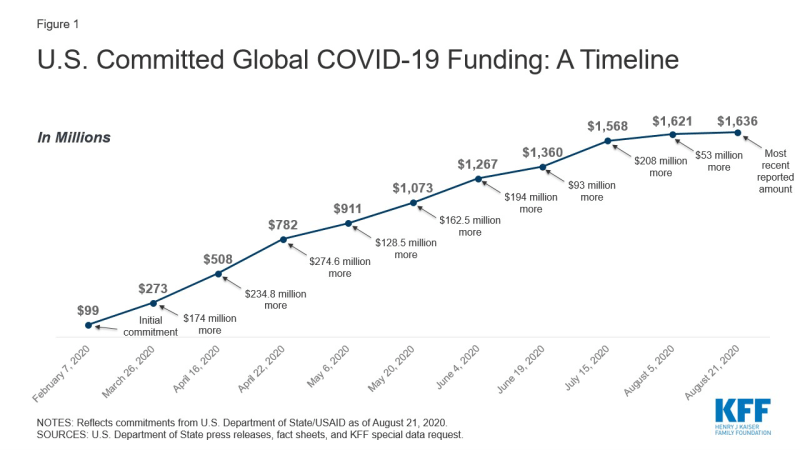