HIV, the virus that causes AIDS (see box), has become one of the world’s most serious health and development challenges since the first cases were reported in 1981. Approximately 76 million people have become infected with HIV since the start of the epidemic.1 Today, there are approximately 38 million people currently living with HIV, and tens of millions of people have died of AIDS-related causes since the beginning of the epidemic.2

HIV: A virus that is transmitted through certain body fluids and weakens the immune system by destroying cells that fight disease and infection, specifically CD4 cells (often called T cells). Left untreated, HIV reduces the number of CD4 cells in the body, making it more difficult for the immune system to fight off infections and other diseases. HIV can lead to the development of AIDS, “acquired immunodeficiency syndrome.”3

Still, remaining challenges continue to complicate HIV control efforts. Many people living with HIV or at risk for HIV infection do not have access to prevention, treatment, and care, and there is still no cure. HIV primarily affects those in their most productive years, and it not only affects the health of individuals, but also impacts households, communities, and the development and economic growth of nations. Many of the countries hardest hit by HIV also face serious challenges due to other infectious diseases, food insecurity, and additional global health and development problems. In addition, there is growing concern about the potential impact of COVID-19 on the HIV/AIDS response in low- and middle-income countries, including on the availability of antiretroviral medicines and access to preventive services.5 Such disruptions in HIV/AIDS efforts are estimated to result in many more additional deaths.6 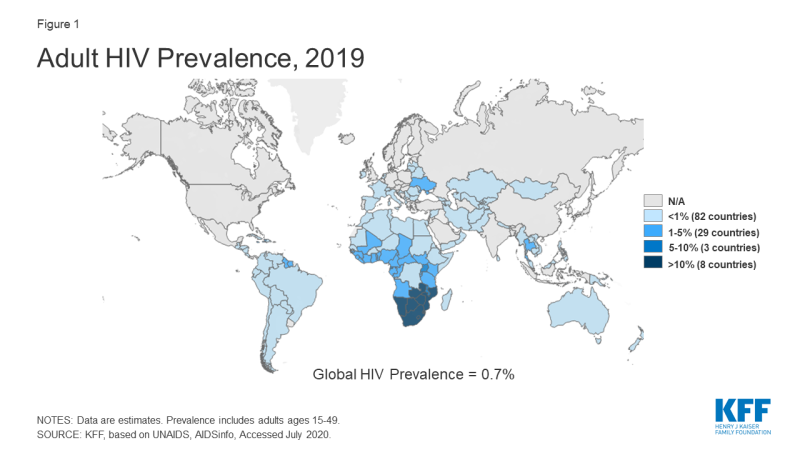 Sub-Saharan Africa,10 with more than two-thirds of all people living with HIV globally, is the hardest hit region in the world, followed by Asia and the Pacific (see Table 1). The Caribbean as well as Eastern Europe and Central Asia are also heavily affected.

HIV has led to a resurgence of tuberculosis (TB), particularly in Africa, and TB is a leading cause of death for people with HIV worldwide.12 In 2018, approximately 9% of new TB cases occurred in people living with HIV.13 However, between 2000 and 2018, TB deaths in people living with HIV declined substantially, largely due to the scale up of joint HIV/TB services. See the KFF fact sheet on TB.

Numerous prevention interventions exist to combat HIV, and new tools such as vaccines, are currently being researched.15

HIV treatment includes the use of combination antiretroviral therapy (ART) to attack the virus itself, and medications to prevent and treat the many opportunistic infections that can occur when the immune system is compromised by HIV. In light of recent research findings, WHO released a guideline in 2015 recommending starting HIV treatment earlier in the course of illness.20

International efforts to combat HIV began in the first decade of the epidemic with the creation of the WHO’s Global Programme on AIDS in 1987. Over time, new initiatives and financing mechanisms have helped increase attention to HIV and contributed to efforts to achieve global goals; these include:

The contributions of affected country governments and civil society have also been critical to the response. These and other efforts work toward achieving major global HIV/AIDS goals that have been set through:

More recently, at the June 2016 U.N. General Assembly High-Level Meeting on Ending AIDS, world leaders adopted a new Political Declaration that reaffirmed commitments and called for an intensification of efforts to end AIDS by 2030.29  In 2017, a report of the U.N. Secretary-General emphasized these commitments, calling for the global community to reinvigorate global efforts to respond to AIDS. 30

UNAIDS estimates that $19.8 billion was available from all sources (domestic, donor governments, multilaterals, and foundations) to address HIV in low- and middle-income countries in 2019.31 Of this, donor governments provided $7.8 billion, representing a reduction from the $8 billion in 2018 and nearly the same as the funding levels of a decade ago (see Figure 2).32 Other governments and organizations that contribute substantially to funding the global response include:

Looking ahead, UNAIDS estimates at least $26.2 billion will be needed annually by 2020 to meet global targets to end AIDS as a global public health threat by 2030.35 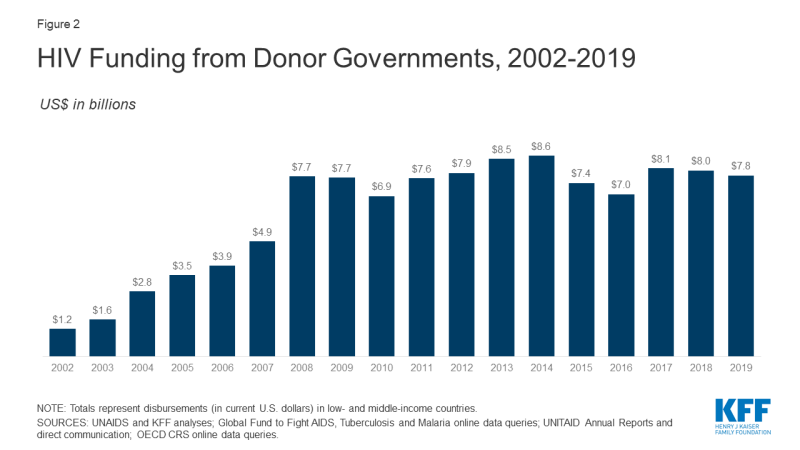 The U.S. government (U.S.) has been involved in HIV efforts since the 1980s and, today, is the single largest donor to international HIV efforts in the world, including the largest donor to the Global Fund.36 The U.S. first provided funding to address the global HIV epidemic in 1986. U.S. efforts and funding increased slowly over time through targeted initiatives to address HIV in certain countries in Africa, South Asia, and the Caribbean, but they intensified with the 2003 launch of the President’s Emergency Plan for AIDS Relief (PEPFAR), which brought significant new attention and funding to address the global HIV epidemic, as well as TB and malaria.37

Created in 2003, PEPFAR is the U.S. government’s global effort to combat HIV. As an interagency initiative, PEPFAR involves multiple U.S. departments, agencies, and programs that address the global epidemic, and it is carried out in close coordination with host country governments and other organizations, including multilateral organizations such as the Global Fund and UNAIDS.38 Collectively, U.S. bilateral activities span more than 50 countries, including countries reached through regional programs in Asia, West Africa, and the Western Hemisphere, with U.S. support for multilateral efforts reaching additional countries.39 To date, PEPFAR funding, which includes all bilateral funding for HIV as well as U.S. contributions to the Global Fund and UNAIDS, has totaled more than $90 billion.40