The U.S. and Gavi, the Vaccine Alliance

Gavi, the Vaccine Alliance (Gavi) is an independent public-private partnership and multilateral funding mechanism that “save lives, reduce poverty, and protect the world against the threat of epidemics.”2 Created in 1999, Gavi was formally launched in January 2000.

Gavi has outlined similar goals for its next five-year period, starting in 2021.4

Gavi’s Secretariat, with its main headquarters in Geneva, and an office in Washington, D.C., carries out the day-to-day operations of the partnership. A team of Country Responsible Officers, based in the Geneva offices, oversees agreements with countries and works with country governments to implement programs. Gavi is led by a Chief Executive Officer (CEO), currently Seth Berkley.5 The partnership does not have program offices or staff based in recipient countries.

Gavi’s partners include: donors such as the U.S. government (discussed further below); the Bill & Melinda Gates Foundation; developing country governments; multilateral organizations such as the United Nations Children’s Fund (UNICEF), the World Health Organization (WHO), and the World Bank; and civil society groups.

The 28-member Gavi Board, with representation from a broad set of public and private stakeholders (see Table 1), sets Gavi’s funding policies and strategic direction.6 Additionally, several Board committees, such as the Audit and Finance Committee and the Programme and Policy Committee, guide and advise the Board and the CEO on Gavi activities under their purview. The U.S. government is represented on Gavi’s Board as an alternate board member for one of the Donor Countries Governments constituency seats, and has a seat on the Audit and Finance, and Programme and Policy Committees.

Through the end of 2019, the partnership had received almost $19 billion in financing (see Table 2).7 Three-quarters (78%) of Gavi’s funding comes from direct donations provided by donor governments and private organizations and individuals. The top three government donors are the United Kingdom, the U.S., and Norway, while the largest private donor (and largest donor overall) is the Gates Foundation. The remainder (22%) of Gavi’s funding comes from the proceeds of two unique innovative financing mechanisms – the International Finance Facility-Immunisation (IFFIm) and the Advance Market Commitment (AMC). The U.S. does not support these mechanisms, due to restrictions on making commitments to multi-year appropriations.8

Gavi is approaching its next five-year period (2021-2025) and has been engaged in a replenishment effort that launched in August 2019, culminating in its global vaccine summit in June 2020. Gavi seeks to generate donor support of at least $7.4 billion for its next period.9

Advance Market Commitment. The AMC, which began operating in 2010, supports accelerated access to pneumococcal vaccines. Donors provide up-front funding commitments to support vaccine purchases, which helps speed the introduction and use of the vaccines in Gavi-supported countries.11 Six donors support the AMC; in order of commitment amount, they are: Italy, the United Kingdom, Canada, Russia, Norway, and the Gates Foundation.12

Only low- and middle-income countries with a Gross National Income (GNI) per capita below or equal to $1,580, and that meet benchmarks for commitment to vaccine delivery and, depending on the vaccine, burden of disease are eligible for Gavi support. 58 countries are currently eligible;13 these include 24 of the 25 U.S. priority countries for maternal and child health assistance.14

Recipient governments are expected to share responsibility for funding their national immunization efforts through “co-financing” requirements, determined according to country income level. As countries develop economically, they are expected to contribute a greater share of the funding required for immunization programs.15 When a country’s income rises above the GNI per capita threshold ($1,580), it moves into a 5-year “accelerated transition” period of increasing domestic financing share, after which the country is expected to fully fund its own immunization programs.16 Since 2015, fifteen countries have transitioned out of Gavi financial support.17

Gavi provides financing to country programs through different types of support. Eligible countries may apply for funding provided through one of Gavi’s several “funding windows”, which include support provided in the form of new and underused vaccines assistance (i.e., helping countries to introduce and expand the use of new and underused vaccines in their national immunization programs) as well as support for complementary activities, such as developing vaccine delivery systems, health systems strengthening, and supporting the development of civil society. Gavi has also provided country support through emergency response funding, including support for Ebola vaccination in the Democratic Republic of Congo,18 and allowing for up to $200 million in reprogrammed Gavi support for COVID-19 response in Gavi-eligible countries.19

Overall, from 2000 through November 2018, Gavi has disbursed over $13 billion in support to 76 low- and middle-income countries through more than ten funding windows (see Table 3). Most Gavi support (79%) has been provided through the new and underused vaccines funding window, followed by health systems strengthening (11%).20

According to Gavi, its support has led to improved child health and immunization indicators in countries that have received it. For example, Gavi reports since its inception in 2000, the organization has contributed to the immunization of over 760 million people in supported countries, saving an estimated 13 million lives.21 Gavi states that half of children worldwide (49%) have been reached through Gavi-supported vaccine programs.22

The U.S. government has supported Gavi since its creation. President Clinton made the initial U.S. pledge to the newly formed partnership in 2000, and the U.S. provided its first contribution in 2001.23 Currently, the U.S. supports Gavi through financial contributions, participation in Gavi’s governance, and providing technical assistance. It also supports other global immunization activities that, while separate, support the work of Gavi.

U.S. financial support to Gavi has grown over time and includes direct contributions to Gavi but, thus far, has not included support for Gavi’s innovative financing mechanisms. The U.S. has contributed to Gavi every year since 2001, with U.S. contributions increasing from $48 million in 2001 to $290 million in 2020 (Figure 1).24 The current Administration requested the same funding level for Gavi, $290 million, for FY 2021.25 Congress provides funding for U.S. contributions to Gavi through the Global Health Programs account at the U.S. Agency for International Development (USAID), specifically within the maternal and child health budget line.

The U.S. government has made two multi-year pledges of support to Gavi in the past. The first pledge was made in June 2011 for $450 million over three years, a pledge which was met through U.S. contributions in 2012 through 2014. A second pledge was made in January 2015 for $1 billion over four years. Congress met this pledge with its Gavi appropriations between FY 2015 and FY 2018. 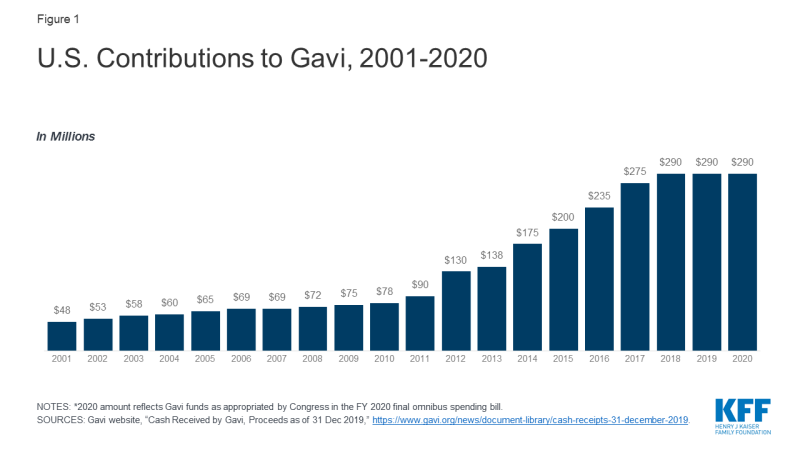 The U.S. also provides Gavi with technical support and expertise in the design, implementation, and evaluation of its programs in the field through partnerships with several U.S. agencies. For example, Gavi’s accelerated introduction programs for the pneumococcal and rotavirus vaccines have been conducted with technical support from the Centers for Disease Control and Prevention (CDC) and USAID, along with other partners.

Support of Gavi is one component of a broader set of global immunization activities of the U.S. government. In addition to multilateral funding for the U.S. contribution to Gavi, the U.S. provides bilateral (country-to-country) support for immunization through USAID, CDC, and other agencies. The two types of assistance – multilateral and bilateral – are intended to be complementary, with funding for Gavi supporting the introduction of new and underused vaccines into routine immunization systems globally, and bilateral aid supporting countries’ immunization system improvements in order to help them deliver Gavi-financed and other vaccines.27 Indeed, many of the countries in which the U.S. carries out its global health programs, including bilateral global immunization activities that are part of U.S. global MCH efforts, also receive support from Gavi.28 See the KFF fact sheets on U.S. global MCH efforts and U.S. global polio efforts.

The U.S. government has consistently supported Gavi since its inception in 2000 as a means of supporting global immunization programs and improving child health in developing countries. As the coronavirus continues to spread globally, there is growing concern over its impact on ongoing immunization efforts, including those supported by Gavi. Key policy issues for U.S. engagement with Gavi going forward include: