An updated version of this report was released on February 17, 2022 and can be found here.

This report presents findings from a state-level survey on states’ family planning benefits under Medicaid, as of July 2015. The survey queried states about their coverage policies under fee-for-service for the following family planning services: reversible contraceptives, sterilization services, fertility diagnosis and treatment, services related to family planning and sexual health such as cancer treatment and partner violence, and managed care policies. The survey identifies differences between states as well as within states between Medicaid eligibility pathways: traditional Medicaid (available pre-ACA), Medicaid expansion under the ACA, and family planning-only coverage through a state Medicaid waiver or State Plan Amendment (SPA). All 50 states and the District of Columbia were invited to respond to the survey, but data are presented for 40 states and the District of Columbia that provided responses (Figure 1). Throughout the report, DC is counted as a state, totaling 41 respondents. 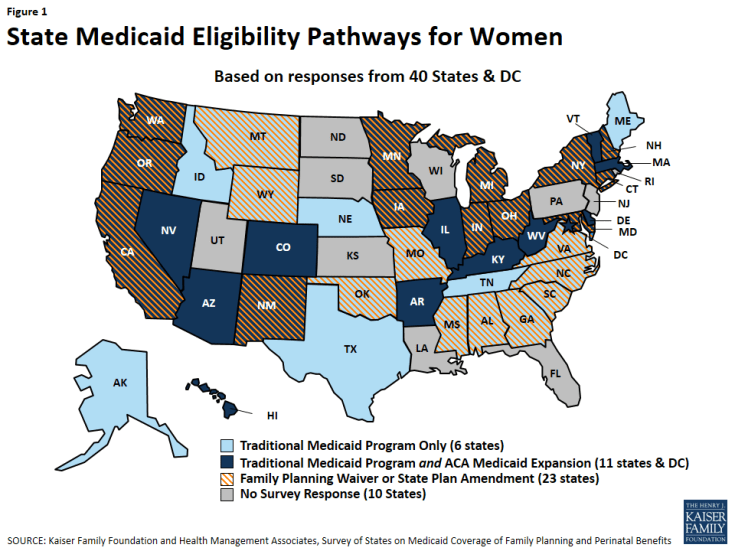 Most states cover sterilization services in their FFS program, but few pay for fertility services. Federal law specifies that states must cover surgical and implant sterilization procedures for women under ACA Medicaid expansion, and all of the responding states reported that they cover these procedures in traditional Medicaid as well.

The analysis of state responses to this survey found that overall most states cover a broad range of prescription contraceptive methods in their full scope, traditional Medicaid programs and their full scope ACA Medicaid expansions, but finds more variation in coverage through the family planning expansion programs. Thirty-six of 41 surveyed states report that they cover all prescription contraceptives for women through their full scope programs. While states are not required to cover all methods under all pathways, most do. However, there is more variation between and within states for coverage of over-the-counter contraceptives, including condoms and Plan B emergency contraception pills. In some states that provide coverage, it is only with a prescription which can limit access to these safe and effective methods. Furthermore, over the years the family planning field has evolved to encompass other services beyond contraception that help women and men maintain and control their reproductive and sexual health. Medicaid coverage for prevention and management of breast and cervical cancers and screening for interpersonal violence is available in most states, but not as consistently as for contraceptives. These preventive services must be covered by new private insurance plans as a result of the ACA, but there is no requirement that they be covered under traditional Medicaid or under the family planning expansion programs.

Access to the full range of contraceptive methods as well as related family planning services has become a standard of comprehensive health care for women and men in their reproductive years.2 As enrollment in the Medicaid program continues to grow as a result of the ACA and state decisions to expand coverage for family planning services, policy choices defining coverage of services under Medicaid family planning will continue to be a significant force shaping access to sexual and reproductive health services for low-income women and men in years to come.

The authors express appreciation for the assistance of several individuals who assisted with the preparation, testing, and refinement of the survey instrument, including Yali Bair of Ursa Consulting, Amy Moy from the California Family Health Council, Tasmeen Weik of the federal Office of Population Affairs, Melanie Reece of Colorado’s Department of Health Care Policy and Financing, and Lisa DiLernia of Michigan’s Department of Health and Human Services.

We thank the following colleagues from Health Management Associates: Joan Henneberry for guidance and subject matter expertise; Dennis Roberts for database development and management; and Nicole McMahon for assistance with compiling the state data tables.

We also thank the Medicaid directors and staff in the 40 states and the District of Columbia who completed the survey on which this report is based.