Medicaid is the primary funding source for family planning services for low-income women. While the federal and state governments jointly finance the program, states operate their programs and establish benefits, eligibility and coverage policies subject to broad federal guidelines. To understand variations in the scope of coverage for family planning and perinatal services and related state Medicaid policies across the nation, the staff of the Kaiser Family Foundation and Health Management Associates surveyed states about benefit policies in place as of July 1, 2015, for family planning and perinatal services.

The survey was conducted between October 2015 and February 2016. Forty states and the District of Columbia responded to the survey. Non-responding states are: Florida, Kansas, Louisiana, New Jersey, North Dakota, Pennsylvania, Rhode Island, South Dakota, Utah and Wisconsin. A majority of the states responding to the survey contract with managed care organizations (MCOs) under a capitated structure to deliver Medicaid services, including family planning. While the survey asked states to consider only state Medicaid policies under fee-for-service when responding to the questions, it is possible that MCOs provide additional family planning services to enrollees as added value benefits, unless they are contractually prohibited from doing so. 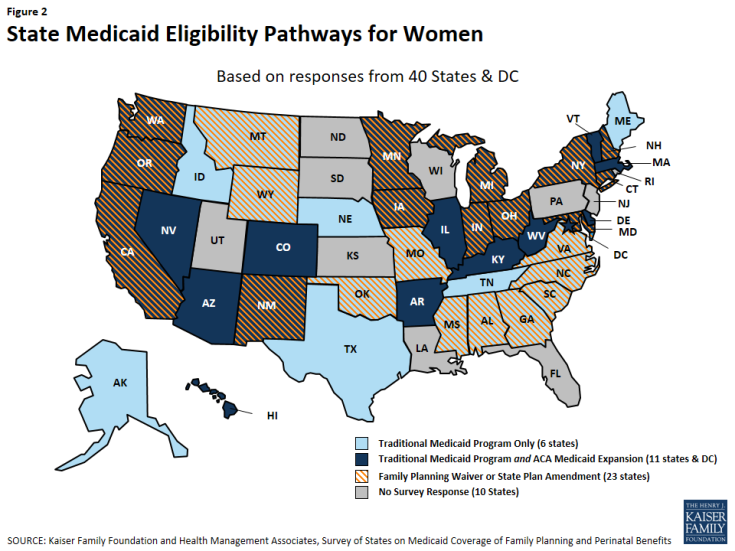 This report presents the survey findings on 41 states’ Medicaid coverage of family planning services as of July 2015 (DC is referred to as a state throughout this report, for simplicity). Summary tables are presented throughout the report and more detailed, state-level tables are in Appendix A. A companion report summarizing state Medicaid coverage of perinatal services will be issued in the near future.

The manner in which family planning services are financed and organized is unique within the Medicaid program. Federal law:

In addition to long-standing coverage under traditional Medicaid programs, states have also applied to the federal government via “Section 1115 Medicaid waivers” establish programs that extend Medicaid coverage for family planning services only to women and men who are not otherwise eligible for full-scope Medicaid. Prior to the ACA, waivers were the only mechanism for states to establish these limited scope programs.  The waivers must be approved by the Centers for Medicare and Medicaid Services (CMS), the federal agency that oversees the Medicaid program.  Multiple studies have found that these programs prevent unintended pregnancies and abortions, thus improving women’s health and saving money for the federal and state governments.3

The ACA made many changes to Medicaid coverage that affected beneficiaries’ access to family planning services under the program. Beginning in 2014, states could expand Medicaid eligibility to most people with incomes below 138% FPL without regard to categorical eligibility. As of March 14, 2016, 31 states and the District of Columbia have chosen to adopt full scope Medicaid expansion programs.4 ACA also defined a minimum “Alternative Benefit Plan” (ABP) that states must provide to beneficiaries under this full scope Medicaid expansion option. The ACA specifies that the ABP must include ten “essential health benefits,” including preventive services, at no cost to the patient.5 The preventive services under this policy include several services related to family planning, such as all FDA-approved contraceptives with a prescription, testing for sexually transmitted infections, screening for cervical and breast cancers, the HPV vaccine, and screening for intimate partner violence. Traditional, pre-ACA Medicaid programs and waiver-specific programs, however, are not bound by the ABP requirements, which means that the benefits package can vary within states for different Medicaid populations based on their eligibility pathway (Appendix B).

The ACA also eased the process for states to establish limited scope family planning programs, enabling them to change their program by adopting “state plan amendments,” or SPAs, without requesting a federal waiver of Medicaid rules. States could continue to operate their family planning programs under the waivers as they had historically done, or they could establish the program under SPA authority.

There is a minimum floor of family planning services that must be covered under ACA Medicaid expansion, but that is not the case for traditional Medicaid or family planning-only coverage (Table 2). This survey asked states about the scope of states’ coverage of family planning benefits under multiple eligibility pathways for Medicaid. Detailed findings from 40 states and DC on commonalities and differences between and within states are presented for reversible contraceptives, sterilization services, fertility diagnosis and treatment, related sexual health services such as cancer treatment and partner violence screening, and managed care policies.