On January 28, 2021, President Biden issued a Memorandum on Protecting Women’s Health at Home and Abroad, directing Health and Human Services (HHS) to review the Title X Family Planning program regulations issued by the Trump Administration. These rules prohibited Title X grantees from participating in the program if they provide abortion referrals or abortion services in the same physical location as well as other requirements. The Biden Memorandum calls for HHS to “consider whether to suspend, revise or rescind, or publish for notice and comment proposed rules suspending, revising, or rescinding those regulations, consistent with applicable law, including the Administrative Procedure Act.” In the short term, the Biden Administration could suspend enforcement of the Trump Administration regulations in the same way that they recently did for public charge. While this approach would permit clinic sites supported by existing grantees to once again provide abortion counseling and referrals, new regulations would be needed to make federal support available to new or previous grantees.

This issue brief reviews the process and scenarios for timelines by which the Biden Administration could address the loss of clinics triggered by the Trump regulations by issuing new regulations and awarding new grants under the updated regulations. On March 8, 2021, 162 members of Congress sent a letter to the acting secretary of HHS urging the agency to swiftly complete their review of the Trump-era regulations and to rescind that rule no later than March 29, 2021.

There are two ways new regulations can be promulgated per the Administrative Procedures Act. One option is a Notice of Proposed Rule Making (NPRM). An NPRM is the standard process where the proposed rules are published in the Federal Register and then open for public comment for at least 60 days. The agency is then required to address the public comments and only then are regulations published in the Federal Register and considered final.

Another option is an interim final rule, which is published as a final rule and effective immediately but this approach provides an opportunity for the public to comment at the time the rule is published. An interim final rule is a faster process than an NPRM but can only be promulgated with “good cause” and when an agency decides it is “impracticable, unnecessary, or contrary to the public interest” to go through the longer process of proposed rulemaking.

The Biden Administration could promulgate a new rule by following the process for issuing a notice of proposed rulemaking (NPRM) where the proposed rule is published in the Federal Register and then open for public comment for at least 60 days. HHS would then review the public comments, respond to them, make changes to the rule accordingly, and then publish final regulations. Regulations usually become effective 60 days after publication but the agency could make them effective sooner if it has good cause.

Under the fastest timeline, which would likely take at least five months to implement (Figure 1), the Biden Administration could publish a notice of proposed rulemaking in the federal register in March of 2021, followed by at least a 60-day public comment period. Over the next month, HHS would then review the public comments, prepare a response to them, and potentially issue a final rule as early as June 2021. At its fastest, the NPRM process would likely take at least five months, but it often can take longer. For example, the Trump Administration’s NPRM process for promulgating new Title X regulations took nine months from June 1, 2018 to March 4, 2019, and the first provisions became effective 60 days after publication on May 3, 2019.

If the Biden Administration issues an interim final rule, the new regulations would become effective immediately. Because an interim final rule can only be promulgated if there is good cause to do so, however, HHS would need to determine that going through the longer process of proposed rulemaking is contrary to the public interest. The Biden Administration could cite the substantial decline in participating clinics and clients served by the program, as well as the six states that no longer have any Title X funded clinics (Figure 2). While an interim final rule might be the faster option, it increases the risk that organizational grantees and representatives of state interests that do not want to adhere to the new regulations would present a legal challenge on the grounds that they are held to follow a regulation that differs from the ones under which they applied. 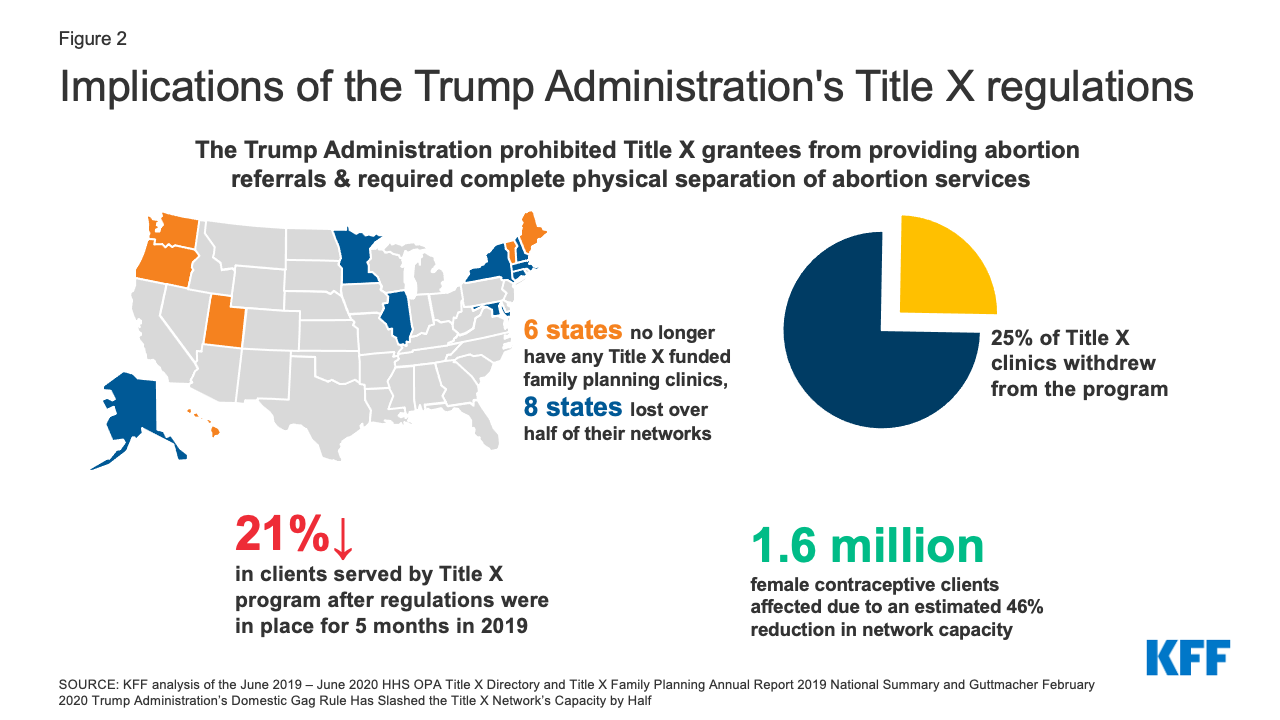 Once there are new regulations, the grantees that disburse the Title X funds to the clinic sites that are still in the Title X program can change the requirements for program participation, requiring them to offer  pregnancy options counseling that includes abortion along with prenatal care and adoption, as well as abortion referrals and allow financial separation rather than full physical separation from onsite abortion services. They could also begin to bring clinics that left the program because they felt they could not adhere to the Trump Administration regulations back into their networks. However, in the states that no longer have Title X grantees or who have lost a large share of grantees (high need areas), the Office of Population Affairs (OPA) would need to issue a funding opportunity announcement (FOA) under the new regulations to resume federal support for services to these areas. If an interim final rule is issued shortly, a new FOA could be released as early as March 2021, or as late as June 2021 if the regulations are published through the slower NPRM process. Typically, grantees are given at least 60 days to prepare and submit applications, followed by an OPA review which could take between 30 and 60 days, and OPA could therefore grant awards as early as June/July 2021 with an interim final rule or September/October 2021 with an NPRM. The new American Rescue Plan Act of 2021 included a $50 million dollar supplemental appropriation to the Title X Family Planning Program to make grants and contracts, which could be used to bring Title X grantees that have left the program back into the program through this new FOA and still keep funding levels stable for those who stayed on.

In addition to bringing grantees of high need areas back into the Title X program, OPA will also have to issue a funding opportunity announcement for renewal of all the current grantees whose three-year grant cycle ends March 31, 2022. If the agency keeps with previous funding cycles, OPA will likely release an FOA for the existing grantees this October or November. Those grantees would be given at least 60 days to respond to the FOA with applications due in January 2022 and new awards by April 1, 2022 when the funding cycle ends. It is possible that OPA would have to go through the funding opportunity cycle twice in the span of a few months to fund new/returning grantees who have been disqualified under the Trump Administration rules as well as those that have stayed in the program.

Will There Be New Legal Challenges to Biden Administration’s Title X Regulations?

The Trump Administration sought to expand the Title X network to include new “family planning” grantees who offer fertility awareness-based methods and prioritize abstinence, but not necessarily offer contraception to their clients. Obria Medical Group, a Catholic organization that has religious objections to contraception and abortion, applied for a Title X grant in January 2019 and was awarded a grant of over $5 million over 3 years. Obria views their services “as a form of Christian Ministry which must conform to the tenets of that faith in its treatment of the vulnerable… and that to refer for or otherwise facilitate an abortion is gravely sinful.”

When Obria applied for the Title X grant in January 2019, they assumed that the Trump Administration’s final rule would be in effect during the grant period. However, the Trump Administration final rule was initially blocked by federal courts and the prior regulations (which were in place until July 15, 2019), required nondirective pregnancy options counseling and abortion referrals.

In May 2019, Obria filed a lawsuit against HHS, requesting an injunction to stop enforcement of the requirement to provide nondirective pregnancy options counseling and abortion referrals, claiming this requirement violates their religious rights. The following month, they withdrew their lawsuit, after Health and Human Services sent them a letter effectively notifying them that they would not be required to provide abortion referrals if they have a religious objection and would still be eligible for federal Title X support.

The Biden Administration will likely have a different interpretation of the Title X statute and will require all grantees to comply with all the rules of the Title X program (including non-directive pregnancy options counseling, contraception, and abortion referral) which would effectively disqualify Obria from continued participation in the program. Therefore, Obria may file a legal challenge to regulations if they are disqualified from receiving Title X funds, and the courts will be asked to answer the legal question: Is the federal government required to provide a federal grant to an organization that has religious objections to fulfilling the requirements of the grant?

The federal rule-making process is not fast, nor is the funding opportunity and application process. Today, the Title X program is serving far fewer clients than before the Trump regulations took effect and there are many parts of the country that no longer have clinics that are receiving federal support. By issuing the Memorandum on Protecting Women’s Health at Home and Abroad in his first eight days of his presidency, President Biden signaled that this is a top priority for his administration, but the process for implementing new regulations and distributing new funding will take time.