Overview of Health Benefits for Pre-65 and Medicare-Eligible Retirees

Over time, the share of large employers (with 200 or more employees) offering retiree health benefits has declined, and employers that continue to offer benefits have made changes to manage their costs, often by shifting costs directly or indirectly to their retirees.  Since 1988, the percentage of large firms  offering retiree health coverage has dropped by more than half from 66 percent in 1988 to 28 percent in 2013, according to the 2013 Kaiser/HRET Survey of Employer-Sponsored Health Benefits (Figure 1).  The biggest drop occurred between 1988 and 1991, after the Financial Accounting Standards Board required private sector employers to account for the costs of health benefits for current and future retirees.  But ever since, there has been a more or less steady erosion in the percentage of firms offering retiree health coverage, dropping from roughly 40 percent of large employers in the mid-to late 1990s, to 28 percent of firms in 2013.  Some firms elected to stop offering benefits (usually to future retirees first) while newer firms, and firms in the service and technology sectors, for example, never established the financial commitment to provide health benefits to their retirees. As a result of these changes, fewer than one in five workers today are employed by firms offering retiree health benefits.1 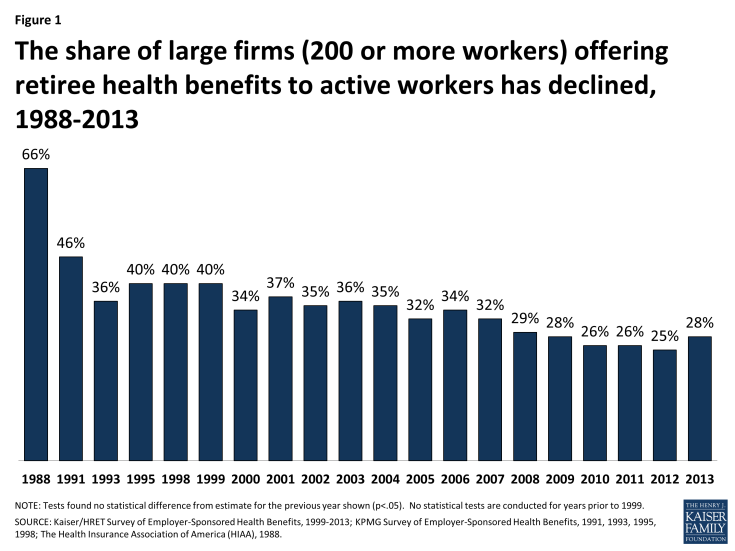 Large firms have always been much more likely than smaller firms to offer retiree health benefits to at least some of their former employees (Figure 2).  Retiree health coverage is more typically offered to state and local government employees, and more often offered to employees in certain industries (such as finance) than to workers in the wholesale or retail industries, according to the KFF/HRET 2013 survey.  Retiree health coverage is also more common among firms that pay higher wages, and more common among large unionized than non-unionized firms. 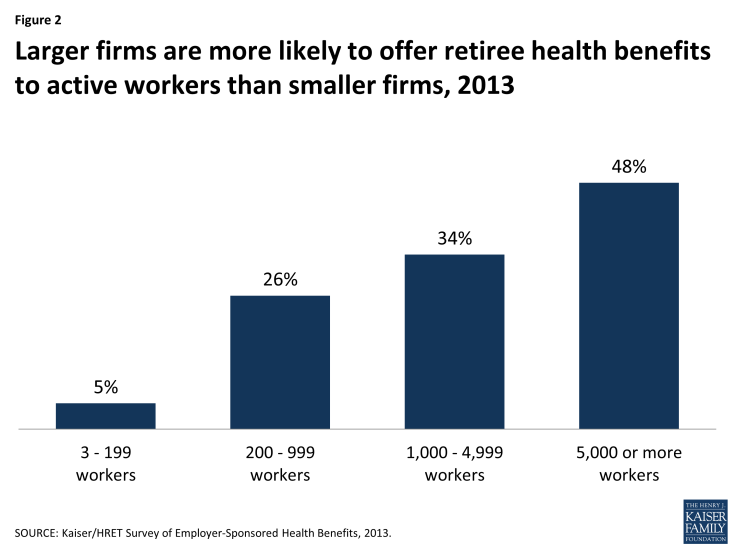 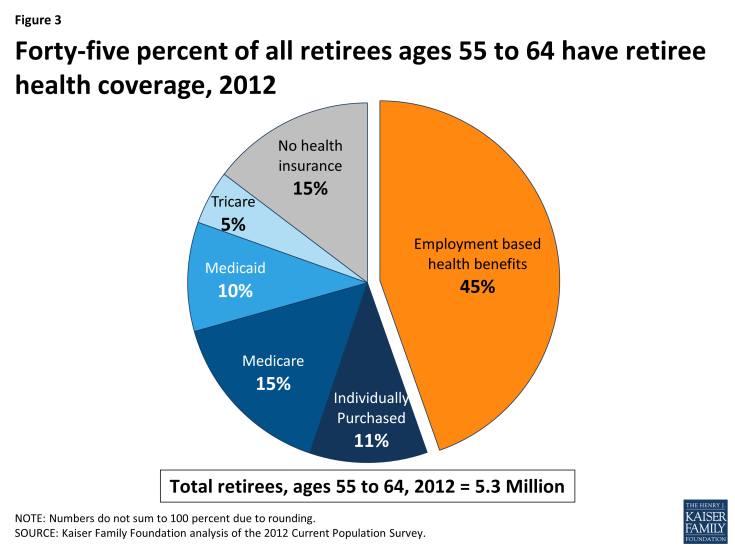 Figure 3: Forty-five percent of all retirees ages 55 to 64 have retiree health coverage, 2012

Large employers typically self-insure the benefits for pre-65 retirees and contract with health insurers to make available their provider network and administer the benefits and claims payments on a national basis.  The employer may either combine the pre-65 retirees along with the active employees in the same risk pool, or break out the retirees in a separate risk pool.  Most recently, as discussed further below, some employers that previously included active employees and retirees in the same plan have taken steps to create a separate legal plan for retirees only, as retiree-only plans are exempt from some of the more costly requirements of the ACA.

Employers offering pre-65 coverage typically offer the retirees the same health plan options that are available to active employees that, for large employers, would typically consist of a choice among several options, e.g., a PPO, an HMO, and (less frequently) a traditional indemnity plan.  Such coverage is typically comprehensive and more generous than what Medicare currently provides, in that employer plans typically include a limit on out-of-pocket costs and provide a prescription drug benefit with no coverage gap.  Often the employer will contract with a separate pharmaceutical benefit manager (PBM) to provide the prescription drug coverage (known as a “carve-out”), although sometimes the same insurer providing the medical benefits will also arrange to provide the prescription drug benefits (known as a “carve-in”).

For retirees on Medicare, generally age 65 and older, employer-sponsored retiree health is the primary source of supplemental coverage (Figure 4).  In 2010, nearly one-third (31%) of all Medicare beneficiaries had employment-based supplemental retiree health coverage.  Another 4 percent were covered by an employer plan as an active worker, which means the employer plan was the primary payer. 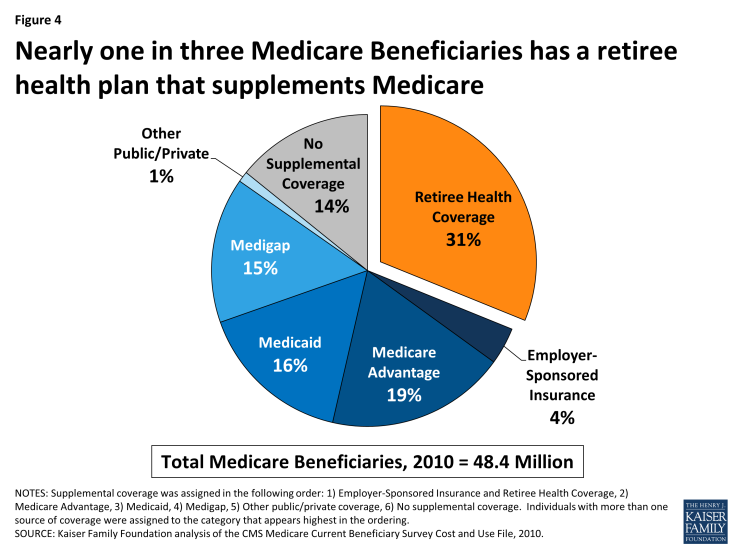 Figure 4: Nearly one in three Medicare Beneficiaries has a retiree health plan that supplements Medicare 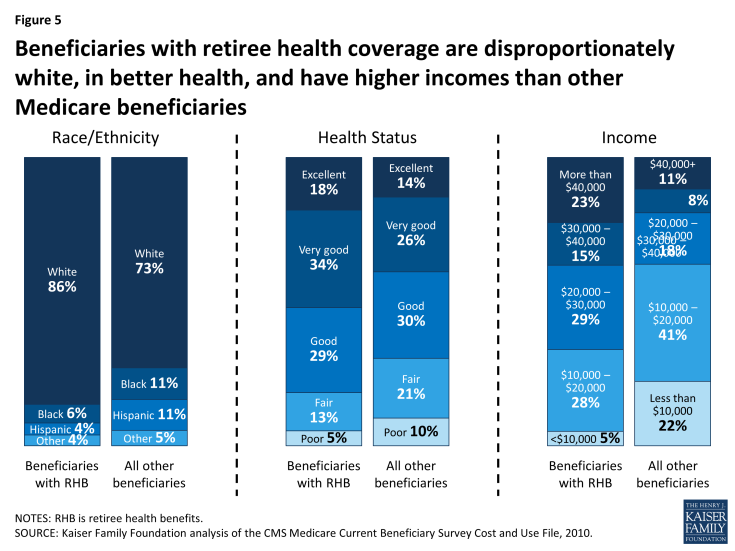 Figure 5: Beneficiaries with retiree health coverage are disproportionately white, in better health, and have higher incomes than other Medicare beneficiaries

Employer-provided retiree health coverage fills significant financial gaps for Medicare-eligible retirees.  Medicare has relatively high cost-sharing requirements, and unlike typical employer plans, has no limit on out-of-pocket spending for services covered under Part A or Part B.  Until 2006, Medicare did not cover outpatient prescription drugs, and even today, the Medicare drug benefit includes a coverage gap, or “doughnut hole” that will be phased down by 2020.  Employer-sponsored retiree health plans help minimize the financial exposure of Medicare-eligible retirees by paying a portion of Medicare’s cost-sharing requirements, and in some instances, by paying for items that are not otherwise covered by Medicare (e.g., eyeglasses).  By one calculation, a 65-year-old couple with Medicare retiring in 2013 without employer-sponsored retiree health coverage is estimated to need $220,000 to cover medical expenses throughout retirement, in addition to costs they may incur for over-the-counter medications, dental services, and long-term care.7

Employers use a variety of approaches to provide health benefits to Medicare-eligible retirees, as described below.

Self-Insured Employer Plans Supplement Medicare Benefits.  The most common arrangement is where an employer sponsors a group plan that supplements Medicare, such as a preferred provider organization (PPO) or an indemnity plan, with a more generous package of medical and prescription drug benefits than traditional fee-for-service Medicare.  For example, retiree health plans typically have a limit on out-of-pocket spending, unlike traditional Medicare, and will cover a larger share of retiree expenses for covered services that exceed the out-of-pocket limit.  These plans are secondary to Medicare, which means that Medicare is the primary payer for each medical claim, and the employer plan will pay its portion of the claim after Medicare benefits are awarded.  Typically the employer plan will coordinate with Medicare benefits using a “carve-out” approach, i.e., the employer plan calculates what it would pay toward the claim and then reduces its payment by the amount that Medicare pays.

Medicare Advantage Plans.  Employers also have the option to contract with a Medicare Advantage plan (such as an HMO or PPO) on a group basis to provide supplemental benefits to its retirees, in conjunction with Medicare-covered benefits provided under that plan.  With this approach, the employer plan negotiates with the managed care organization to define the supplemental benefits that are provided to their retirees.  The managed care plan receives a capitated payment from Medicare for each retiree as well as the incremental additional employer plan premium for the negotiated supplemental benefits.  The Centers for Medicare and Medicaid Services (CMS) established a federal waiver process to give employer plans greater flexibility to contract with Medicare Advantage plans by allowing such plans to limit enrollment to beneficiaries in the employer group and making it easier for an employer plan sponsor that wants to adopt a uniform strategy for covering retirees on a national basis. 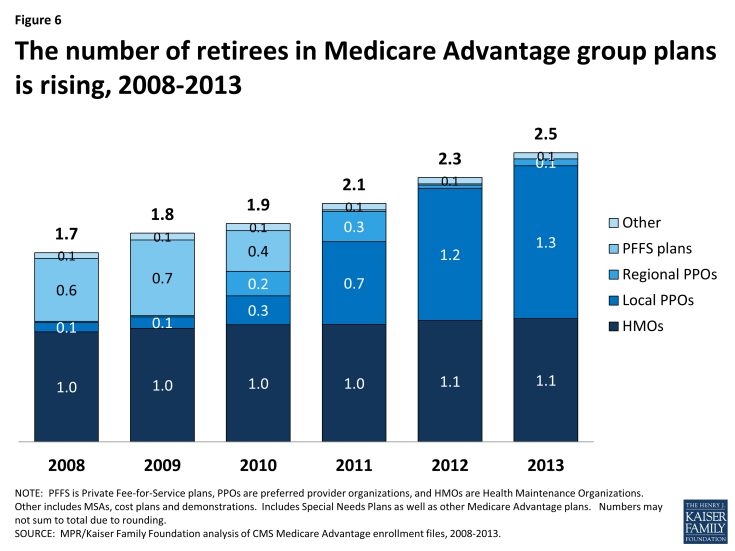 Figure 6: The number of retirees in Medicare Advantage group plans is rising, 2008-2013

The Administration in its FY2014 and FY2015 budgets has proposed to align payments for group plans with other Medicare Advantage plans for an estimated savings to Medicare of nearly $4 billion over 10 years .14,15  Similarly, in its 2014 report to Congress, MedPAC recommended a change in payment policy that would essentially reduce Medicare payments to employer group plans by basing them on the bids submitted by non-group plans, similar to the way it is done for Part D.  It is unclear how these proposed changes in payment policy would affect future enrollment.  Similarly, it is unclear what the effects would be of other recently-proposed rules from CMS that would make policy changes to the Medicare Advantage and Part D regulations without differentiating employer group plans.16

Health Reimbursement Accounts and Private Exchanges.  A newer trend, discussed in greater detail below, is where an employer facilitates retiree access to Medicare Advantage, a Medicare Part D or Medigap plans offered through a private exchange on a non-group basis.  Employers electing this approach typically make a defined financial contribution to a health reimbursement account (HRA) that is used by retirees to pay premiums in the plan selected by the retiree.  Depending on the plan, the HRA may also be used to pay for out-of-pocket medical expenses.  For these arrangements, employers may contract with a third party administrator or facilitator known as a “private exchange” to provide support and assistance to retirees in choosing from among a broad array of non-group plans of different types, plan designs, and costs.

Typically, retirees are required to make a contribution toward the total premium, and in some instances, retirees pay 100 percent of the cost.  According to Mercer’s National Survey of Employer-Sponsored Health Benefits, retirees ages 65 and older paid the full premium in 40 percent of the large employer plans offering retiree health benefits.  Conversely, large-employers paid the full amount in 14 percent of plans reported in the Mercer survey.  Among the remaining 46 percent of plans where the cost was shared, the average retiree contribution was 38 percent for Medicare-eligible retirees.  The results were similar among employers offering benefits to pre-Medicare retirees.17

Surveys conducted by the Kaiser Family Foundation and others have documented a trend among employers providing retiree health coverage of modifying their programs in an ongoing attempt to control retiree health costs.18  In addition to outright terminations of coverage, key changes reported by employers over the years include:

Yet despite such efforts, retiree health costs remain a significant concern for the dwindling number of employers that continue to offer this coverage for current workers and, failing that, for those covering a closed group of retirees with grandfathered coverage.  For additional changes under consideration by employers, see the “Emerging Strategies for Employers Offering Retiree Health Coverage” section on page 12.