In 2017, beneficiaries across the country continue to have a substantial number of Part D plan choices. 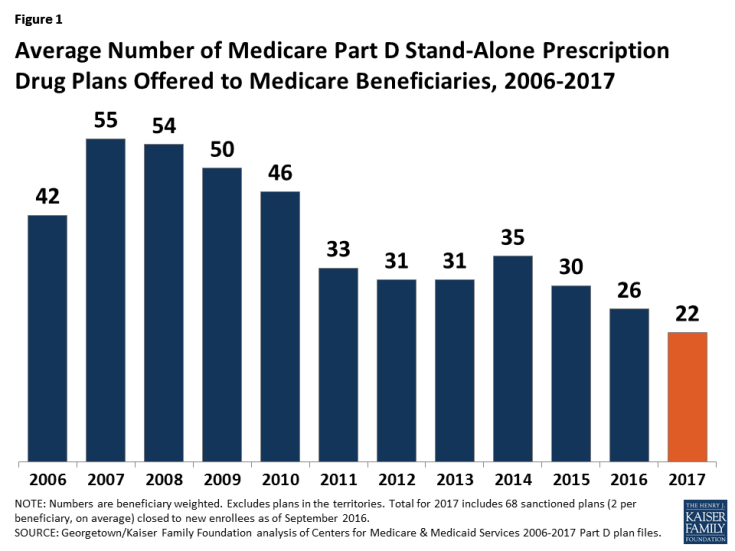 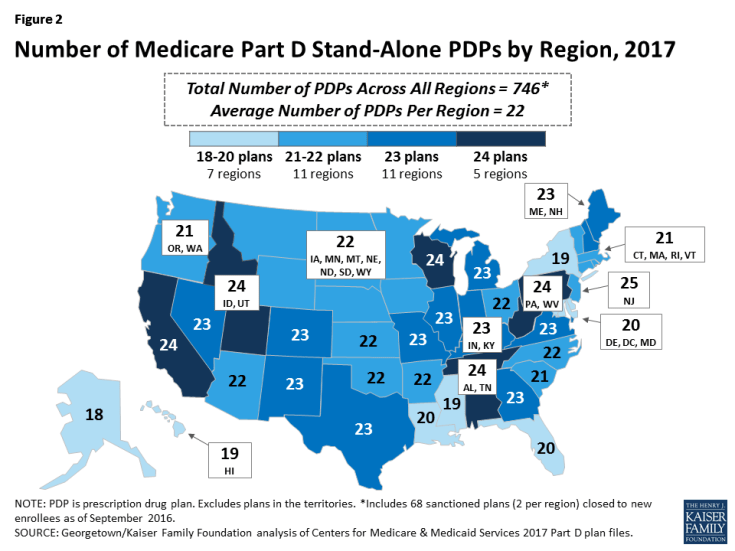 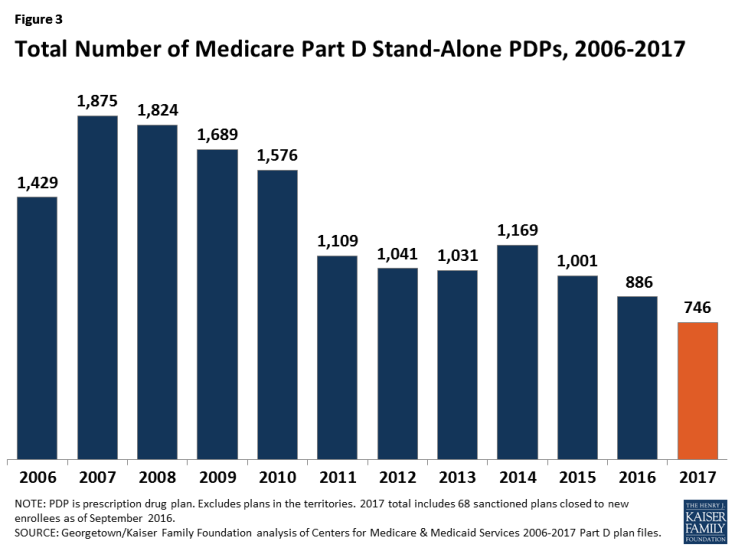 For 2017, only five new PDPs are entering the market (three new local PDPs in the Alabama/Tennessee and Michigan regions and the expansion by one plan sponsor into two additional regions), and 134 PDPs are exiting the program.2

The national average monthly PDP premium is expected to increase for the second year in a row—by 9 percent for 2017—after several years when premiums were essentially flat. Even if a number of beneficiaries switch or are reassigned to lower-premium plans for 2017, the average premium is likely to be higher in 2017 than in 2016, and the two-year increase over the 2015 average premium will mark a significant shift upward. Although beneficiaries and others tend to focus on premiums as the primary measure of plan cost, an individual’s total Part D costs are affected by the plan’s deductible, cost sharing, and whether their current drugs are on formulary. 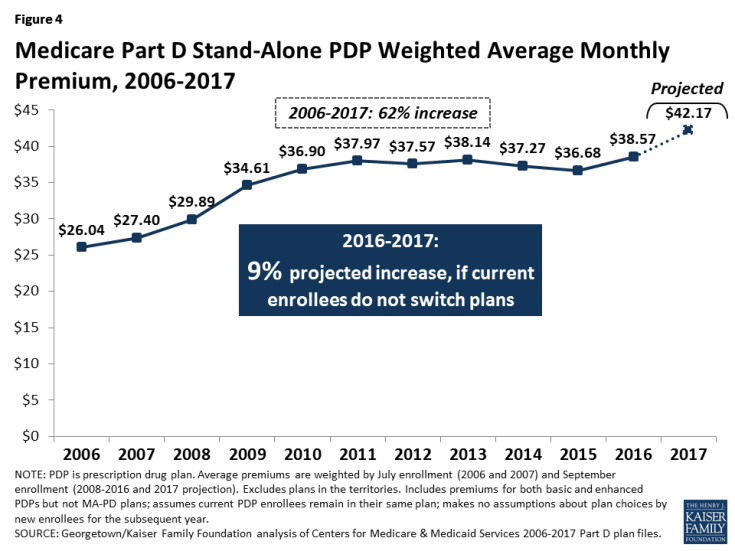 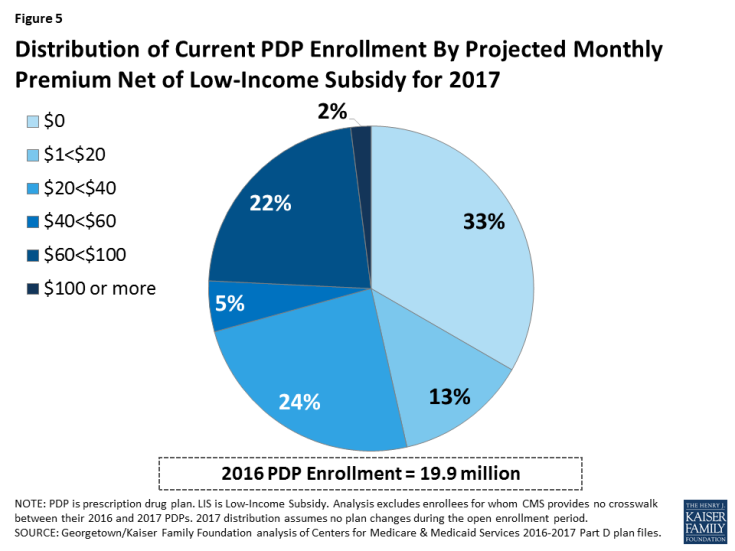 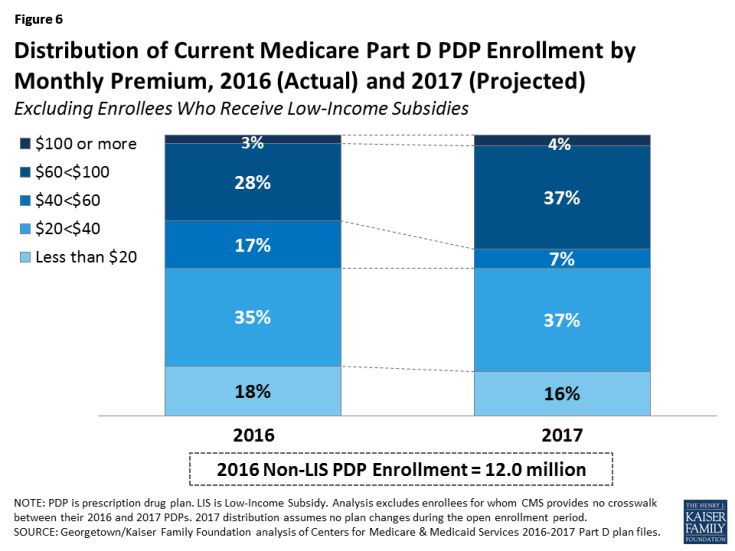 PDP premiums will continue to vary widely by plan in 2017, as in previous years (Figure 7, Table 1). 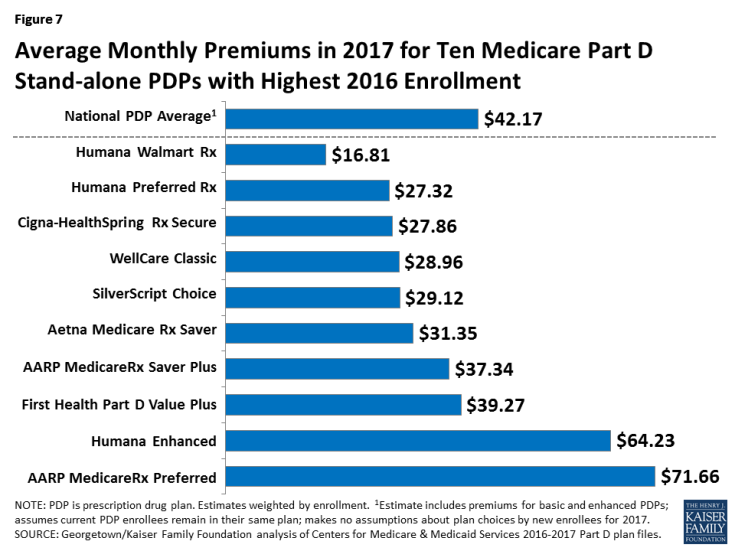 Changes to premiums from 2016 to 2017, averaged across regions and weighted by 2016 enrollment, also vary widely across some of the most popular PDPs (Table 1). These variations reflect factors such as higher premiums in older plans and substantial geographic variation.7 Although variation in benefits offered is also a factor, premium variation persists even among PDPs that offer benefits actuarially equivalent to the basic benefit defined in law.

Enrollees in some of the most popular PDPs could see larger or smaller premium increases than the national average, depending on the region where they live. 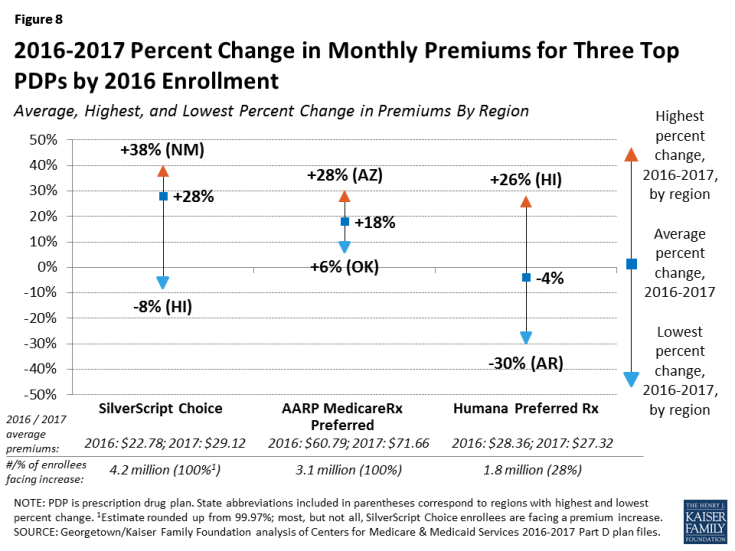 Monthly premiums for the most popular PDPs available since the start of the Part D program in 2006 have changed in different ways (Table 1).

The entry of a new PDP from UnitedHealth for 2017 (AARP MedicareRx Walgreens) is the latest example of plans sponsors offering new PDPs at low premiums, presumably to attract new Medicare beneficiaries.

Average PDP monthly premiums, weighted by 2016 enrollment, will vary widely in 2017 across regions, along with the change in premiums from 2016 to 2017. 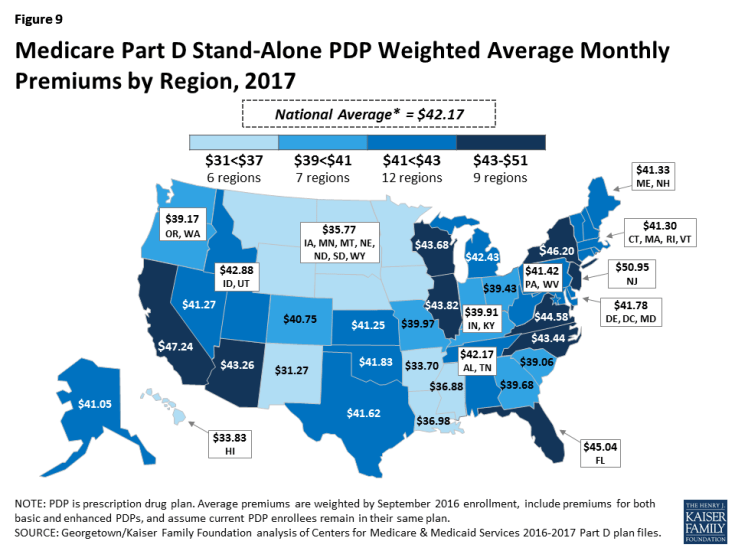 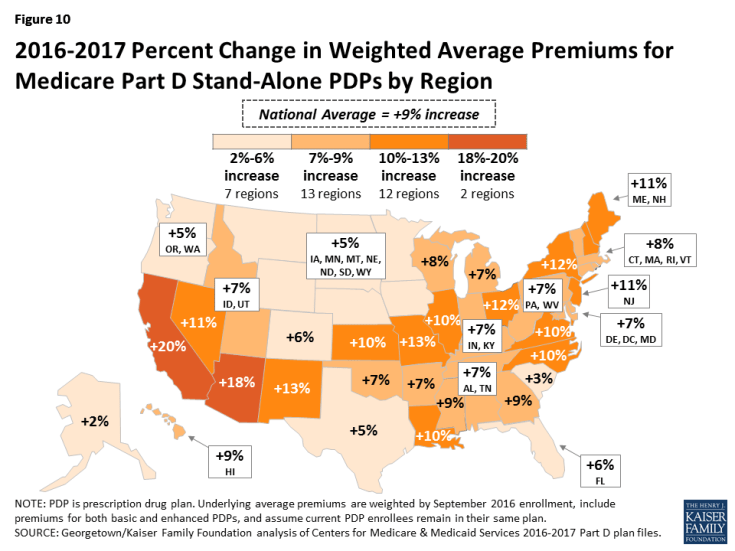 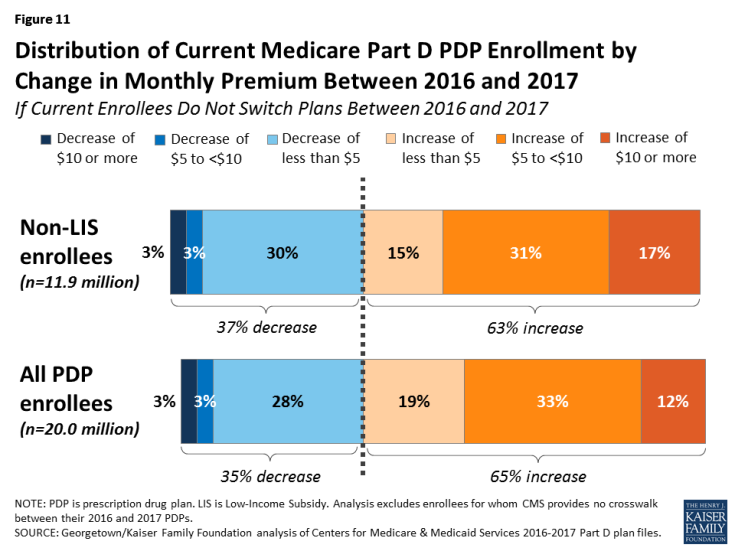 Figure 11: Distribution of Current Medicare Part D PDP Enrollment by Change in Monthly Premium Between 2016 and 2017

In 2017, for the third year in a row, all Part D PDPs will offer an alternative benefit design to the defined standard benefit, which has a $400 deductible in 2017 and 25 percent coinsurance for all covered drugs. Some plans modify or eliminate the deductible, and virtually all PDPs will have a benefit design with five tiers for covered generic and brand-name drugs.

The standard (maximum) Part D deductible is increasing by $40 in 2017 from $360 to $400, the same dollar increase as in 2016. The increase of $80 between 2015 and 2017 is greater than the net increase from 2006 to 2015. The large increase in the last two years results from a statutory formula that adjusts the amount each year based on the annual percentage increase in average per capita aggregate expenditures for covered Part D drugs. Other amounts for the standard benefit design parameters are increasing as well (Appendix 2). 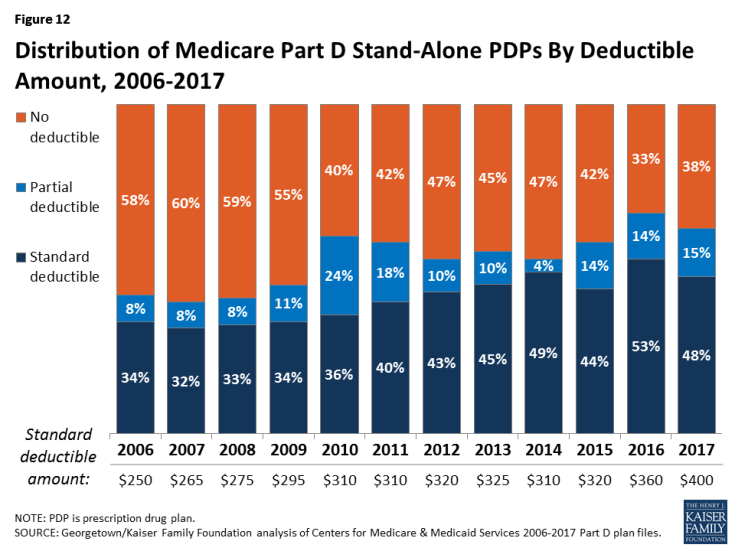 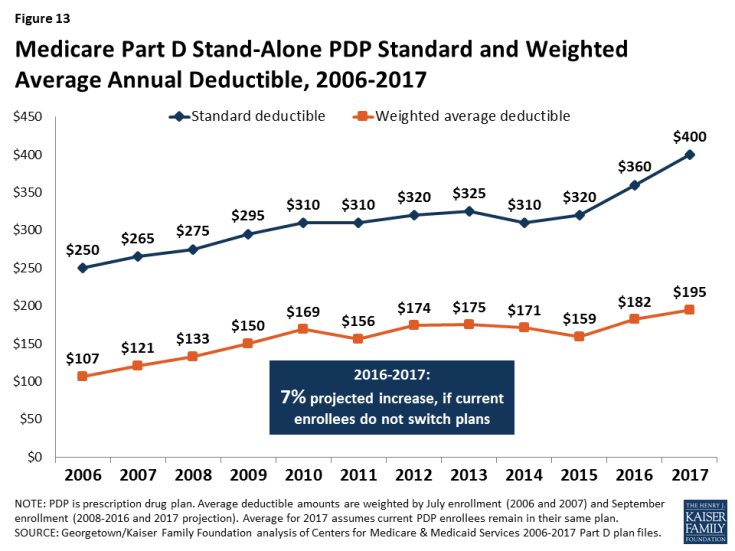 Tiered Cost-Sharing Trends and Amounts in 2017

Tiered Cost Sharing in PDPs with the Most Enrollees

The coverage gap, or “doughnut hole,” has become a less salient feature of the Part D benefit design, as a result of changes made by the Affordable Care Act to eliminate the coverage gap by 2020. In 2017, manufacturer prices for brand-name drugs purchased in the gap phase of the benefit will be discounted by 50 percent, with plans paying an additional 10 percent of the cost and enrollees still responsible for 40 percent. Plans will pay 49 percent of the cost for generic drugs in the gap phase, with enrollees paying 51 percent. In 2017, most Part D plans will offer no gap coverage beyond what is required under the standard benefit.

In 2017, the total number of premium-free benchmark plans—that is, PDPs available for no monthly premium to Low-Income Subsidy (LIS) enrollees—will be slightly higher than in 2016, which was the lowest level in the program’s ten years (Figure 14; Appendix 1, Table A3). 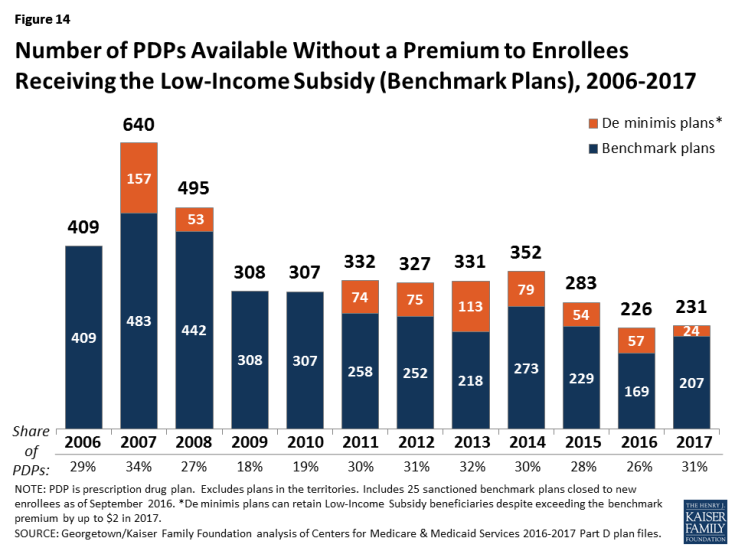 Figure 14: Number of PDPs Available Without a Premium to Enrollees Receiving the Low-Income Subsidy (Benchmark Plans), 2006-2017

The number of benchmark plans available in 2017 will vary by region, from just 3 benchmark PDPs in Florida (out of 20 PDPs overall) to 10 benchmark PDPs in Arizona and the Delaware/Maryland/District of Columbia region (out of 22 and 20 PDPs in these regions, respectively) (Figure 15). 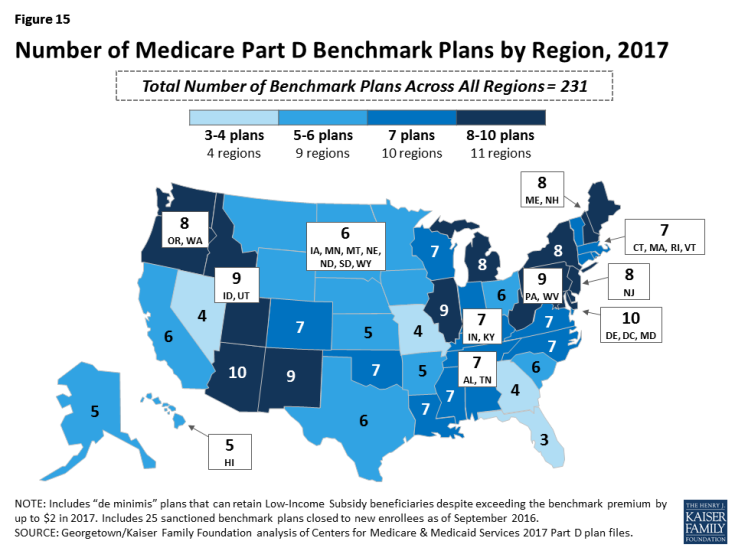 The number of premium-free plans for LIS enrollees offered by the major Part D organizations has fluctuated substantially over the years (Figure 16). 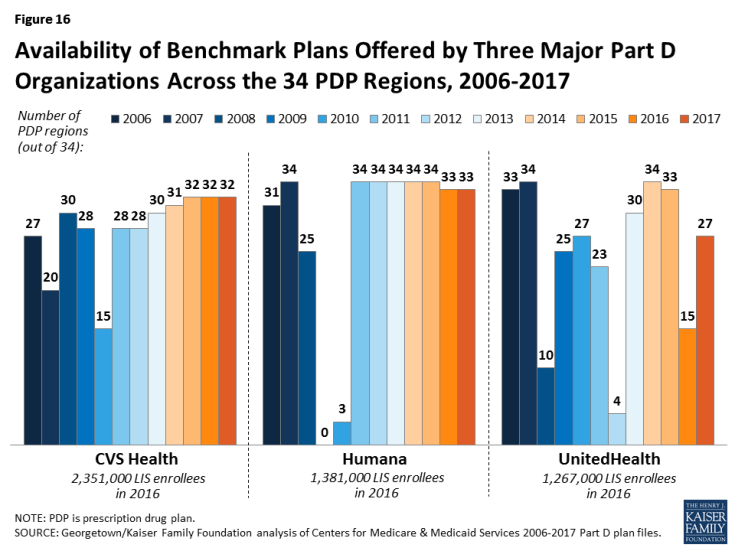 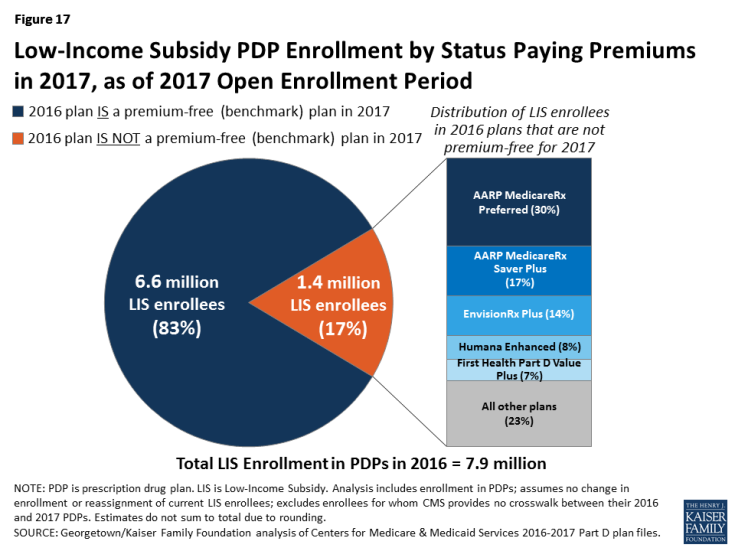 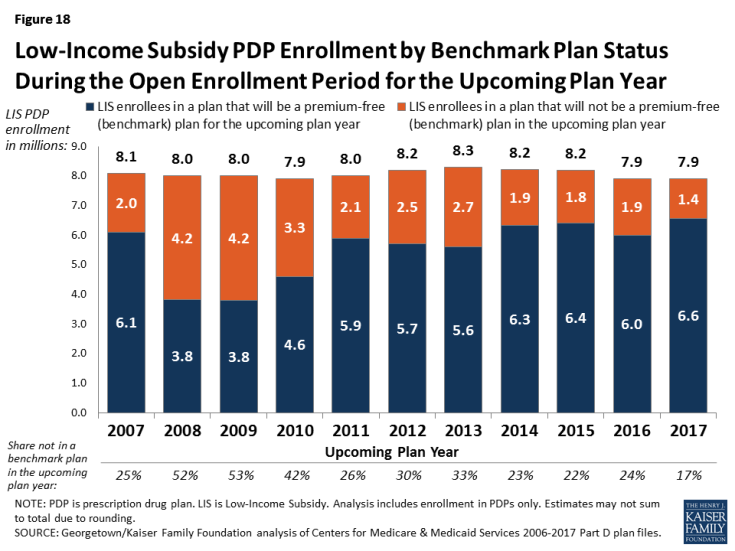 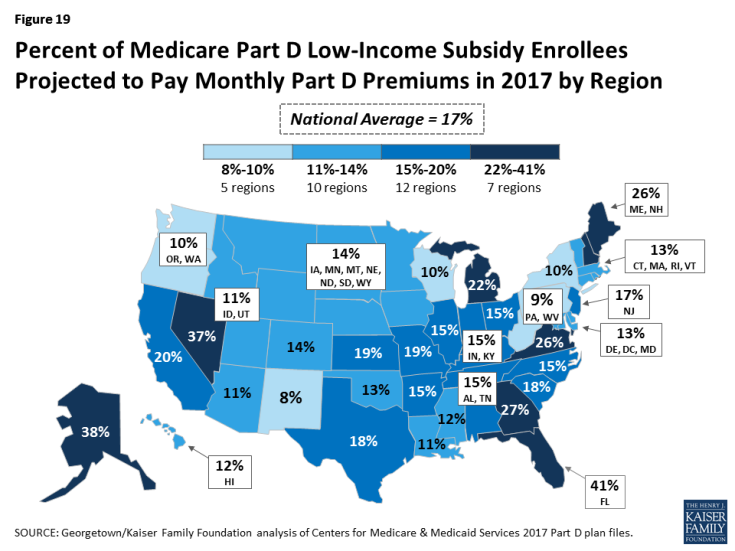 As Medicare Part D enters its twelfth year in 2017, a majority of Part D stand-alone drug plan enrollees face higher premiums if they stay in their current plans. Many also face higher drug deductibles and may pay higher cost sharing for their drugs, depending on the specific drugs they take and the formulary of the plan in which they are enrolled. In a program that offers drug benefits only through private plans, beneficiaries have a choice of 22 PDPs (on average) for which premiums differ by a large margin. Furthermore, the premiums they face vary based on the state where they live. Beneficiaries who receive the Low-Income Subsidy are guaranteed access to premium-free plans, but one in six will pay a premium unless they switch plans or are assigned to a different plan by CMS.

In 2017, two-thirds of PDP enrollees are facing premium increases, while the rest will see lower premiums if they stay in the same plan. In a year when higher drug costs are drawing much attention, it may seem noteworthy that some PDPs are lowering their premiums. For some plans, this may be a result of downward adjustments from previous premium increases that proved to be larger than necessary. The role of the federal reinsurance and risk corridors may also be a factor in how premiums are adjusted from year to year. Because the government reinsures 80 percent of drug costs in the catastrophic phase of the benefit for those enrollees who exceed the threshold, plans have a reduced incentive to manage spending on high-cost drugs. Risk corridors also mitigate the impact of increased costs. As a result, plan sponsors may be more strategic in setting PDP premiums at levels that can attract new enrollees.

In addition, some of the largest premium increases are for PDPs that have been in the program from its beginning; if they have a greater share of older enrollees, they may be experiencing a more rapid rise in drug costs relative to newer plans with a greater share of younger enrollees. Some of these same factors may help to explain the large variation across competing PDPs. Many of the highest-premium PDPs are those that have been in the program the longest.

Geographic variation in premiums is also a recurring pattern in Part D. Enrollees in some states will pay $10 to $20 more per month for the same plans offering the same benefits as those in other states. Although it is unclear exactly what accounts for such large premium differences for the same PDP across regions, possible factors include differences in enrollees’ health status that may not be fully captured in risk adjustment or different prescribing patterns in different regions. The level of market competition in a region is unlikely to be a major factor since mostly the same array of PDPs competes in each region.

Although premiums may be seen as the main measure of a plan’s cost, enrollees’ total out-of-pocket costs are driven as much or more by how much cost sharing they incur for the specific drugs they take, whether they face a deductible, whether their drugs are covered by their plan, and whether they are in a position to take advantage of lower cost sharing available at select pharmacies.14 These factors vary considerably across PDPs and not always in predictable ways. For example, among the PDP options offered by one plan sponsor, the higher-premium PDP has no deductible but charges higher cost sharing than the lower-premium PDP. Furthermore, if some drugs a beneficiary takes are not on the plan’s formulary, out-of-pocket costs are likely to be much higher than when their drugs are covered on formulary.

Beneficiaries have the opportunity to compare Part D plans each year during the open enrollment period. In doing so, they can take into account any recent changes in their own medications. Part D enrollees can compare the various plan features that will affect their costs, such as premiums, deductibles, cost-sharing requirements, tier placement, coverage requirements (such as prior authorization), and whether their usual pharmacy offers preferred cost sharing. The reduced number of PDPs for 2017 could make the process of comparing and reviewing plan options somewhat easier for beneficiaries to undertake, but the large number of PDP options in each region has historically discouraged some enrollees from reevaluating their choices.15

In 2017, despite the availability of premium-free (benchmark) plans, 14 percent of LIS beneficiaries will pay a premium, averaging $286 annually, if they do not switch to a different plan to avoid paying a premium. Some will be reassigned by CMS to new plans, but a large majority of this group is not eligible for reassignment in 2017. For some beneficiaries, it may be worth paying a premium to obtain better coverage for the drugs they take. But many others, especially those paying more than the average, would benefit from reviewing the premium-free PDPs available to them and switching plans.16

Finding ways to get more Part D enrollees engaged in comparing and reviewing plans and making changes that could save them money remains an ongoing challenge for CMS and policymakers. In 2017, some Part D enrollees who retain their current plans may benefit from lower premiums and lower overall costs. But more enrollees will face higher costs in their current plans and would benefit from the opportunity to shop during open enrollment.