We describe here the main elements of the study design.  For a more detailed description of the study methods, see the Appendix.

This study examined Medicare Advantage plans available in 2015 in 20 counties (Figure 1).  The county is the smallest area, in general, that a Medicare Advantage plan must cover.  Counties vary greatly in size and may not be the best metric to assess the health care market of particular locales.  However, an analysis at the county level provided the most complete set of data available for this type of analysis, as well as a reasonable snapshot of the health care market accessible to beneficiaries in that region. 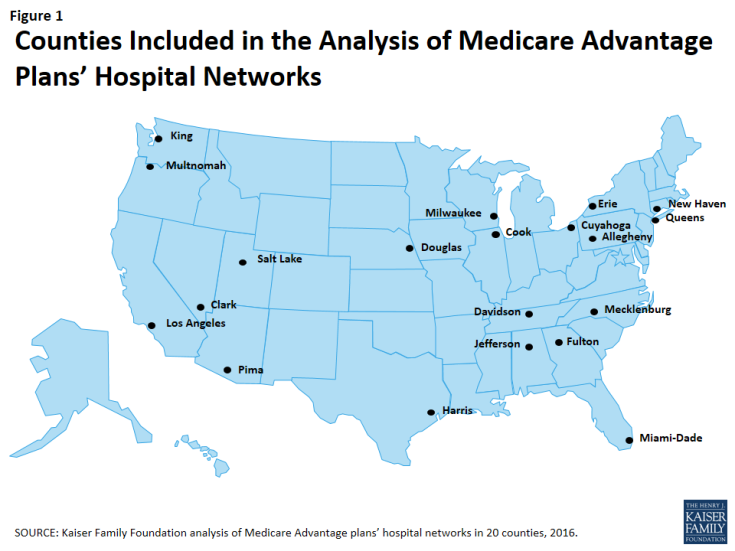 Only HMOs and local PPOs were included in the analysis because the other types of Medicare Advantage plans either do not have networks (e.g., some private fee-for-service plans), or networks that are structured to cover areas larger than a county (e.g., regional PPOs), or are paid in unique ways that influence providers available to beneficiaries (e.g. cost plans).  The analysis also excluded Special Needs Plans (SNPs), employer-sponsored group plans, and other plans that are not available to all Medicare beneficiaries.  In total, across the 20 counties, we included 409 plans, 307 HMOs and 102 local PPOs.  Among the 307 HMOs, 10 were closed panel HMOs, with physicians or groups of physicians directly employed by the HMO, and the remainder were open panel HMOs.  Together, these plans enrolled 1.6 million Medicare beneficiaries in 2015, 92 percent of whom were in HMOs and 8 percent of whom were in PPOs.  Both HMOs and local PPOs were available in all 20 counties, with the exception of Los Angeles where only HMOs were available to Medicare beneficiaries.

Provider directories were the primary source of data used for the study.  The directories were gathered between November and December 2014, to coincide with the Medicare Annual Election Period for 2015, and were either downloaded from the company’s website in a PDF format, when possible, or using a searchable directory embedded in the company website.  The information extracted from this data was complemented with other information available on these plans and counties in CMS’s Medicare Advantage Enrollment file for March 2015 and Landscape file for 2015, and the American Hospital Association’s (AHA) 2014 survey of hospitals.

Classification of Networks by Size

The McKinsey & Company study examined the size of the networks of plans offered in the ACA exchanges, and categorized networks into one of three network sizes.  The difference between the categories used in this study and the McKinsey study is that this study includes a category for medium-sized networks.   That is, this study uses the term “medium” to describe the size of networks that McKinsey described as “narrow.”

Cancer centers designated by the National Cancer Institute (NCI) were identified through the list of centers on the NCI website, and cancer centers accredited by the American College of Surgeons (ACS) were identified based upon data from the AHA 2014 survey of hospitals.  Fifteen of the 20 counties in the study had at least one NCI-Designated Cancer Center within the borders of the county, including Cook, Harris, and Los Angeles counties that had more than one NCI Cancer Center, and all but one of the counties (Pima) had at least one hospital with an ACS-accredited cancer program.

This study has some limitations. Notably, counties vary in size and do not necessarily provide a good measure of the natural market for the health plan and all of its enrollees. The study also focuses on large, urban areas, and does not provide information about plans’ networks in rural areas that have both fewer beneficiaries and providers.  In many cases, physicians, not the beneficiary, may be key drivers in the choice of health plan and this analysis provides no information on the effective match between the breadth of physician networks and hospital networks. Hospital care also is increasingly complex and varied, and a general analysis of hospital networks provides limited insight into the availability of particular services the enrollee may need and where these services are best performed in any given community.  Ultimately, what may be important to beneficiaries is the availability and quality of providers in their plan’s network, and not necessarily the size of the network.