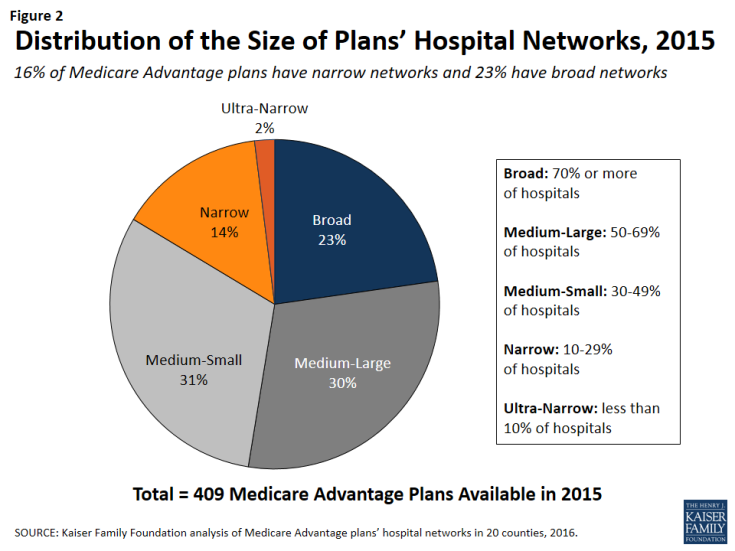 Figure 2: Distribution of the Size of Plans’ Hospital Networks, 2015 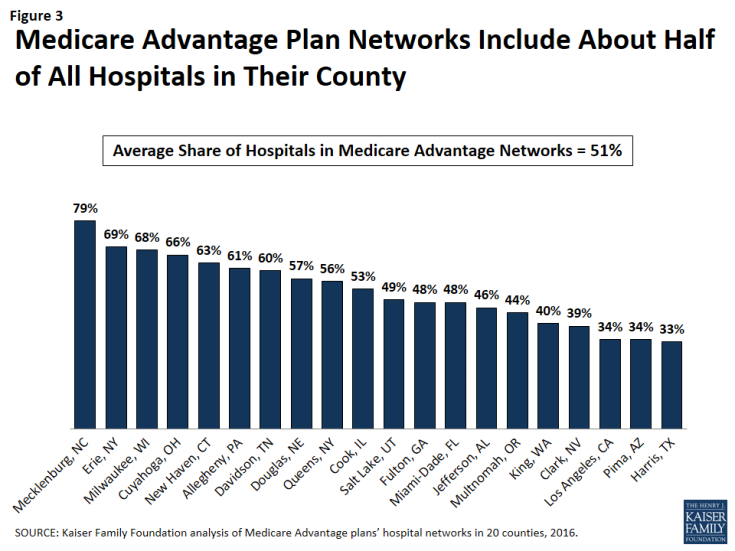 Figure 3: Medicare Advantage Plan Networks Include About Half of All Hospitals in Their County 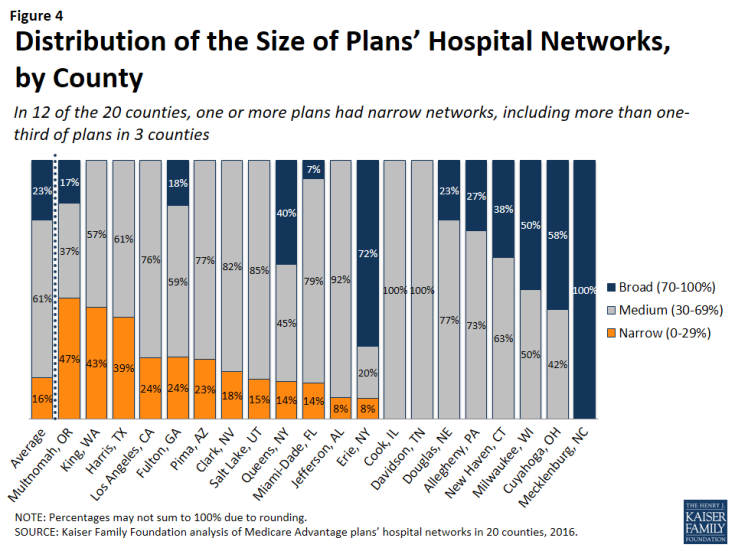 Figure 4: Distribution of the Size of Plans’ Hospital Networks, by County

By Number of Hospitals in the County

By Per Capita Medicare Spending 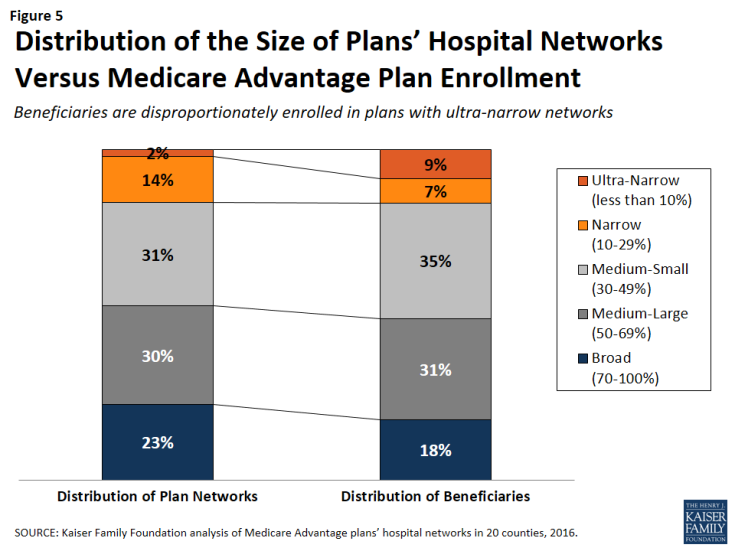 HMOs tend to have narrower hospital networks than PPOs, across the 20 counties studied (Figure 6). In most counties, a larger share of local PPOs had broad networks, and a larger share of HMOs had narrow networks (Tables A3 and A4). 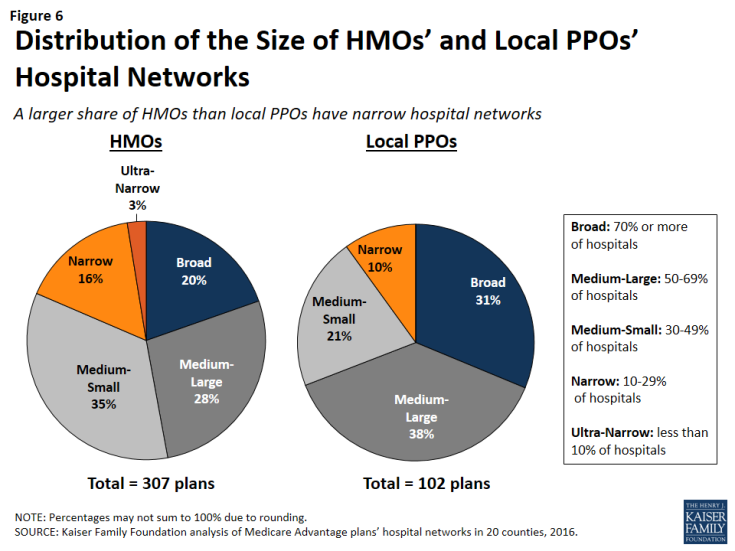 Figure 6: Distribution of the Size of HMOs’ and Local PPOs’ Hospital Networks 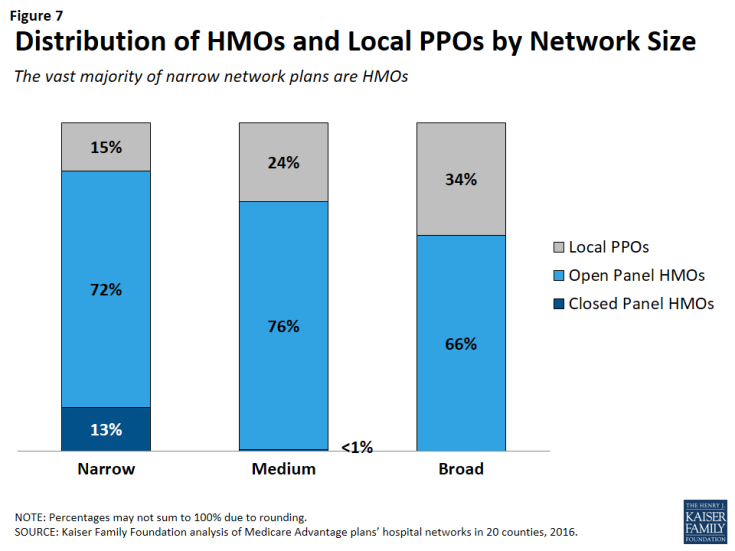 Figure 7: Distribution of HMOs and Local PPOs by Network Size

Most HMOs have open panel designs in which the parent organization has non-exclusive contracts with a range of providers located in the area, and the providers typically accept multiple insurers.  A small share of HMOs have closed panel designs in which the parent organization has exclusive contracts with physicians (employed either directly or in groups) and sometimes also owns hospitals or contracts with hospitals in other ways that result in more centralized hospital capacity. While the data available to distinguish between closed and open panel HMOs are limited, such data suggest that only ten plans in our study had closed panel designs (Figure 8 and Table A5).  Five of the ten plans were offered by Kaiser Permanente in Los Angeles, Multnomah, and Fulton, and typically had narrower networks than other plans, consistent with their design.  The other five closed-panel HMOs were offered by Group Health Cooperative in King County and Leon Medical Centers in Miami-Dade County, both of which included a larger share of hospitals in the county than Kaiser Permanente. 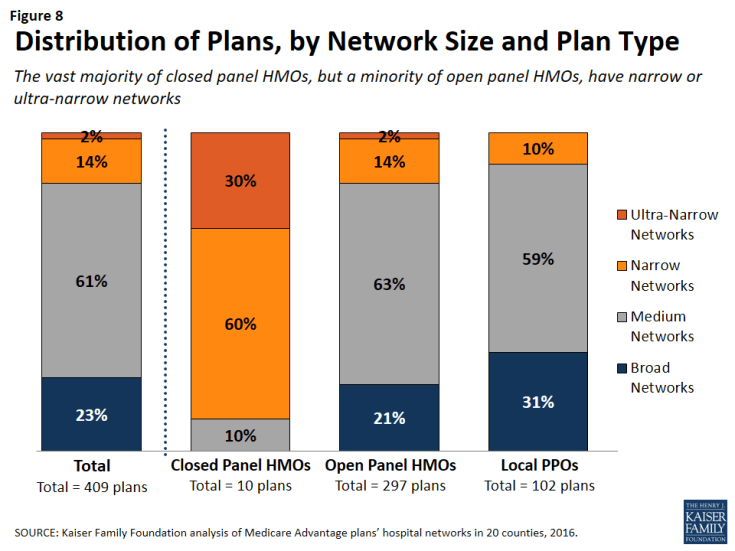 Figure 8: Distribution of Plans, by Network Size and Plan Type

Access to high quality cancer treatment is also important to many Medicare beneficiaries since the incidence of cancer is more than 10 times higher among people ages 65 and older than among younger people.4  To gain insight into the type of cancer treatment available to Medicare Advantage enrollees, this study examined access to cancer centers designated by the National Cancer Institute (NCI) and hospitals accredited by the American College of Surgeons (ACS).  The NCI has designated 69 cancer centers in 35 states as NCI-Designated Cancer Centers in recognition of their leadership and resources in the development of more effective approaches to prevention, diagnosis, and treatment of cancer, and many but not all of these centers are affiliated with Academic Medical Centers.  The ACS Commission on Cancer accredits cancer programs within hospitals that meet ACS quality and service standards, and this accreditation is designed to be an indicator of higher quality cancer care. 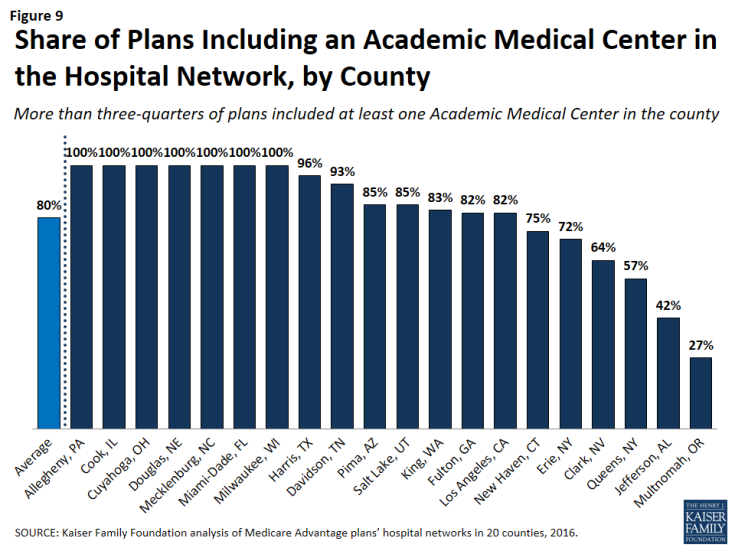 Figure 9: Share of Plans Including an Academic Medical Center in the Hospital Network, by County 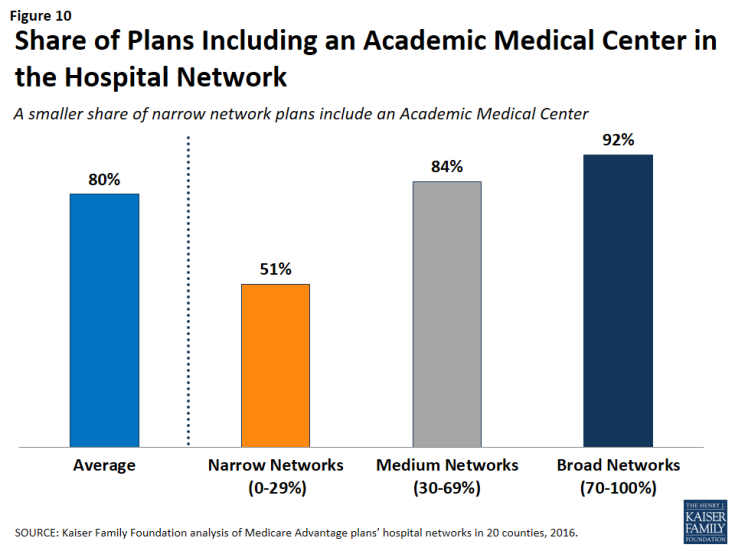 Figure 10: Share of Plans Including an Academic Medical Center in the Hospital Network

NCI-Designated Cancer Centers tend to have greater access to clinical trials, especially early-stage clinical trials, than community hospitals and other treatment centers.  While many hospitals in a community are likely to be able to treat multiple types of cancer, access to NCI Cancer Centers may be particularly relevant to beneficiaries with rarer cancers, more advanced-stage cancers, or other unique complicating conditions. 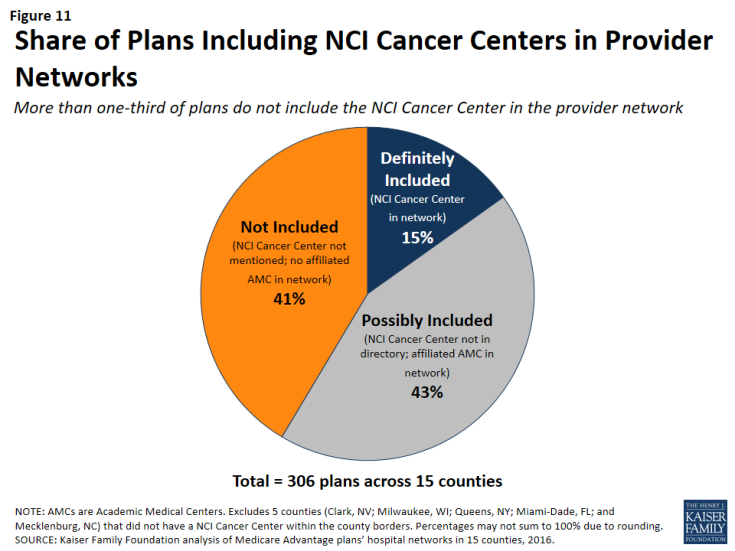 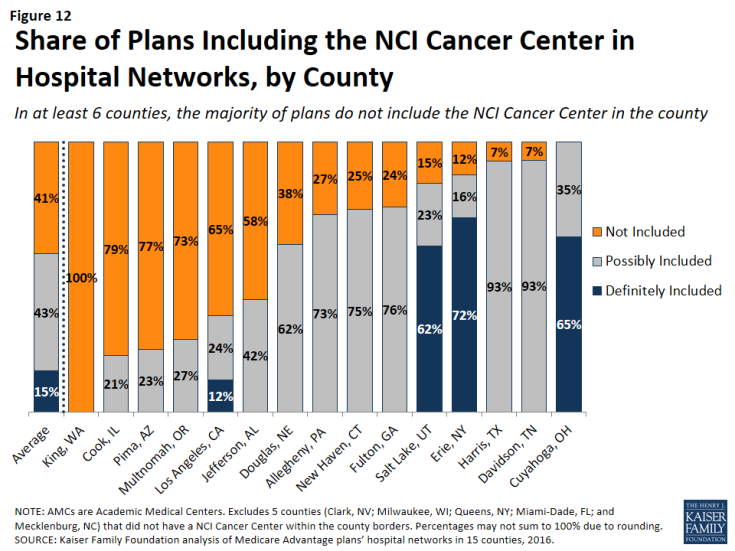 Figure 12: Share of Plans Including the NCI Cancer Center in Hospital Networks, by County

This lack of clarity as to whether an NCI Cancer Center is included in a plan’s provider network may be attributable to the considerable variation in the way in which the cancer centers are listed in the plans’ provider directories.  For example, the Huntsman Cancer Institute in Salt Lake County is affiliated with the University of Utah and is located across the street from their main Academic Medical Center.  Some of the provider directories for Medicare Advantage plans offered in Salt Lake County list Huntsman Cancer Center explicitly, in addition to listing the University of Utah Medical Center, but other provider directories only list the University of Utah Medical Center, and do not mention the Huntsman Cancer Institute. In these situations, it is unclear whether a Medicare beneficiary can assume that coverage of care at the Academic Medical Center includes care at the affiliated cancer center, and the answer most likely varies across plans.

NCI Cancer Centers were less likely to be included in plans with narrow networks than plans with broader networks (Figure 13).  These results were generally consistent across the counties. 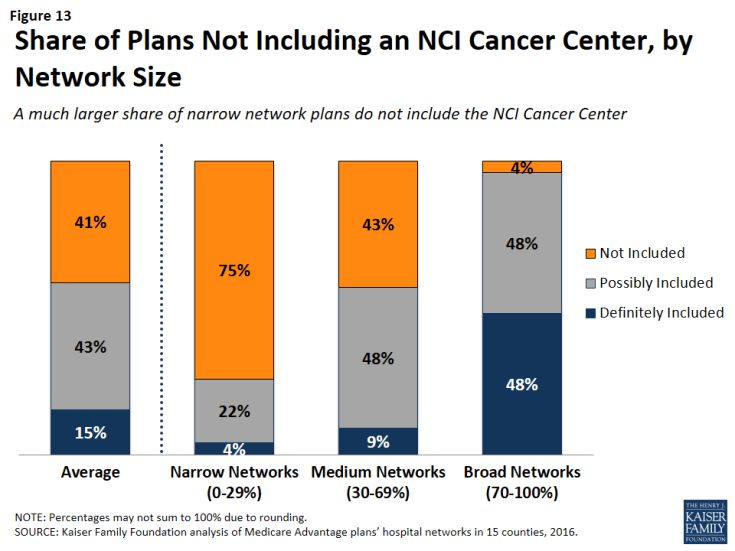 Figure 13: Share of Plans Not Including an NCI Cancer Center, by Network Size

Even when NCI-Designated Cancer Centers are excluded from the provider network, plans may choose to selectively refer enrollees to them, when appropriate, although it is beyond the scope of this analysis to assess the extent to which these referrals occur. Contract negotiations with cancer centers can be complex, particularly when a cancer center is in a strong negotiating position, which may explain why many plans do not include them in the plan networks. 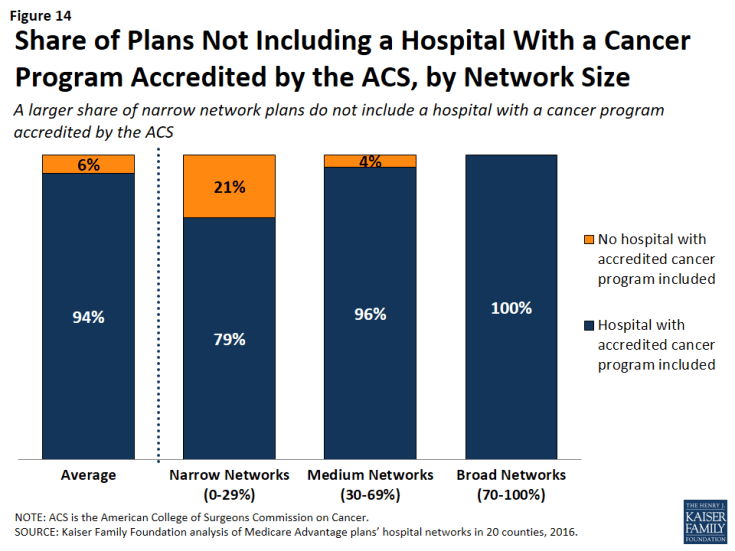 Figure 14: Share of Plans Not Including a Hospital With a Cancer Program Accredited by the ACS, by Network Size

Overall, 3 percent of plans had neither a hospital with an ACS-accredited cancer program nor an NCI Cancer Center in their provider network. While few beneficiaries are evaluating provider networks based on their access to cancer centers, if beneficiaries wanted to know whether a network included hospitals affiliated with an NCI Cancer Center or hospitals with ACS-accredited cancer programs, they would need to use data sources other than the provider directory because these designations are not indicated in the directories.

Other Specialty Units and Facilities

For specialty care more broadly, unless the affiliate is explicitly mentioned in the provider directory, it is unclear whether a hospital’s affiliates are also covered by a plan, or whether coverage is restricted to acute care hospitalization at the specific hospital listed in the directory.  For example, it is often unclear as to whether a hospital’s affiliated heart center, rehabilitation center, or women’s center is included in the plan network that includes the main, acute care hospital.  This lack of clarity makes it difficult for beneficiaries to determine which affiliated providers would be in a plan’s network.

Relationship Between Breadth of Network and Other Plan Features 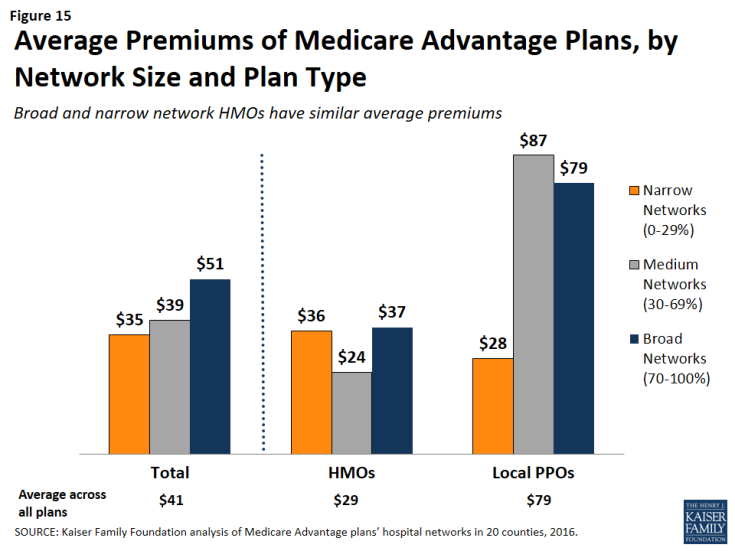 The size and composition of the plans’ provider networks are not used by CMS to assign star quality ratings to the plans; however, the ratings may nonetheless be correlated with the size of the networks if the hospitals excluded from the narrower networks had either a positive or negative effect on plan ratings.  Overall, the average star quality ratings for narrow network plans (4.1 stars) were similar to the average ratings for medium or broad network plans (3.7 and 3.9 stars, respectively; Figure 16). 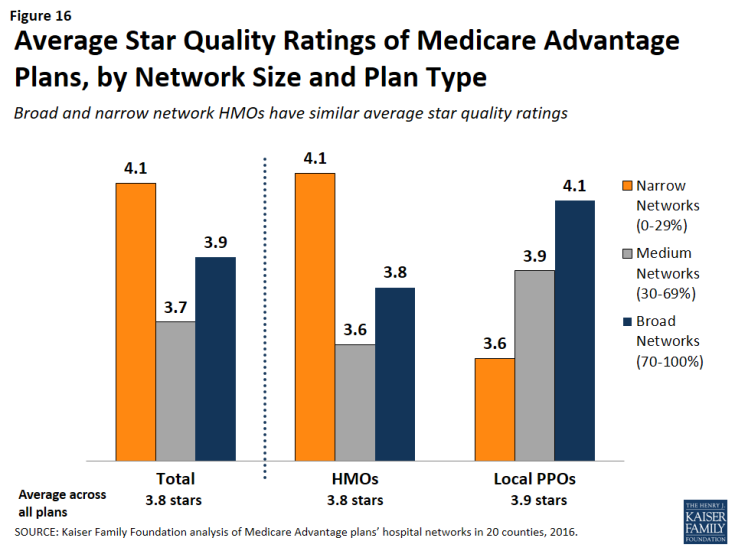 Firm as a Predictor of Network Size

Size of Hospitals by Network Size

The size of the hospitals (measured by the number of beds) included in provider networks could provide some information about the plan’s capacity to provide inpatient care to enrollees, and may have some relationship to the quality of care and enrollees’ satisfaction with their care, although the evidence for this is mixed.  Several studies have found that larger hospitals have lower mortality rates than smaller hospitals;5 however, patients have also rated lower their satisfaction with the care received at large hospitals than at smaller hospitals.6 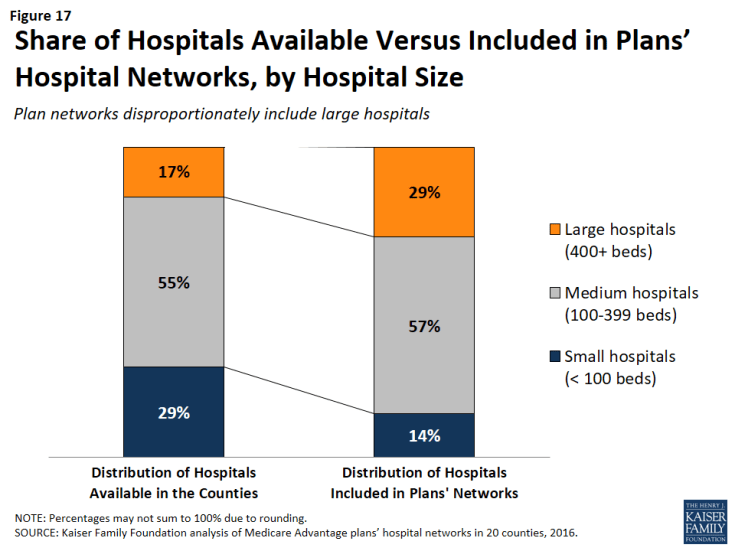 Network size did not appear to be correlated with the size of the hospitals included in the network.  Large hospitals comprised more than one-third of hospitals in both narrow and broad network plans (37% and 35%, respectively), but a smaller share (23%) of hospitals in medium networks.

Ownership of Hospitals by Network Size 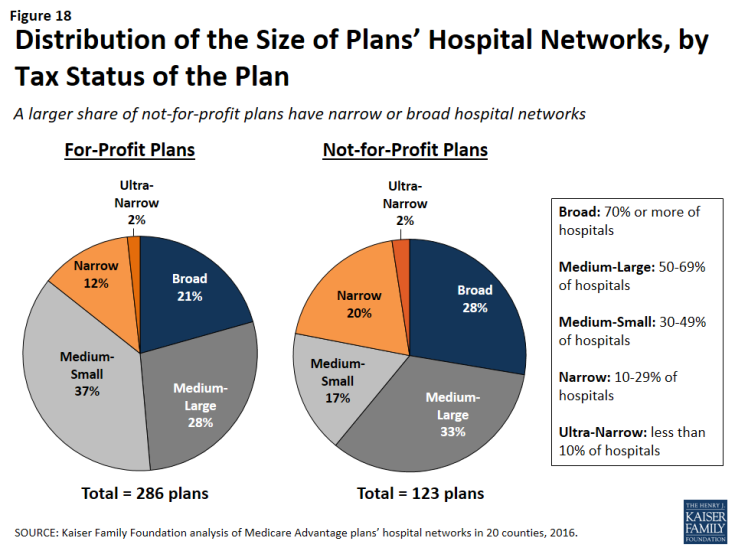 Figure 18: Distribution of the Size of Plans’ Hospital Networks, by Tax Status of the Plan

Methods Findings on the Adequacy of Provider Directories