Only HMOs and local PPOs were included in the analysis because the other types of Medicare Advantage plans either do not have networks (e.g., some private fee-for-service plans), or networks that are structured to cover areas larger than a county (e.g., regional PPOs), or are paid in unique ways that influence providers available to beneficiaries (e.g. cost plans).  The analysis also excluded Special Needs Plans (SNPs), employer-sponsored group plans, and other plans that are not available to all Medicare beneficiaries.  In total, across the 20 counties, we included 307 HMOs and 102 local PPOs. Among the 307 HMOs, 10 were closed panel HMOs, with physicians or groups of physicians directly employed by the HMO, and the remainder were open panel HMOs.  Together, these plans enrolled 1.6 million Medicare beneficiaries in 2015, 92 percent of whom were in HMOs and 8 percent of whom were in PPOs. Both HMOs and local PPOs were available in all 20 counties, with the exception of Los Angeles County where only HMOs were available to Medicare beneficiaries.

Provider directories were the primary source of data used for the study.  The directories were gathered between November and December 2014, to coincide with the Medicare Annual Election Period for 2015, and were either downloaded from the company’s website in a PDF format, when possible, or downloaded using the searchable directory embedded in the company website.  The information extracted from these data was complemented with other information available on these plans and counties in CMS’s Medicare Advantage Enrollment file for March 2015, CMS’s Medicare Advantage Landscape file for 2015, and the American Hospital Association’s (AHA) 2014 survey of hospitals.

Seven plans offered by three companies were excluded from the analysis because either a provider directory was not available for 2015 and the company declined to provide a directory when contacted, or the searchable directory embedded in the company website did not allow for information to be saved.

Two counties from our sample include HMOs with tiered networks of hospitals.  The difference in tier designates a difference in co-pay for a hospital admission.  Consequently, even though all of the hospitals listed in the directory are considered “in-network,” the cost for a hospital stay will differ depending on the hospital’s tier.  While the provider directories designate each hospital’s tier, the information about the difference in cost-sharing only can be found in the plan’s Summary of Benefits document.

The data from the provider directories was inputted twice, by two independent people, and all discrepancies in the data entry were resolved by manually checking the relevant provider directory.  Whenever directories contained typos or slight variations in the name of a hospital, the addresses were used to verify a hospital’s inclusion in the network.  The Centers for Medicare and Medicaid Services’ Provider of Services (POS) file was used to match each hospital location with its unique provider identification number.

For the 10 plans that were closed-panel HMOs, the study used the same four categories to characterize the size of the network.  HMOs with closed panel designs are those in which the parent organization has exclusive contracts with physicians (employed either directly or in groups) and sometimes also owns hospitals or contracts with hospitals in other ways that result in more centralized hospital capacity.  HMOs with open panel designs, which include the majority of HMOs today, are those in which the parent organization has non-exclusive contracts with a range of providers located in the area, and the providers typically accept multiple insurers.  One of the primary reasons people enroll in closed panel HMOs is because they want to have access to the plan’s network of hospitals and doctors, whereas people in other plans generally do not have access to these physicians and facilities.

To gain insight into the type of cancer treatment available to Medicare Advantage enrollees, the study examined access to cancer centers designated by the National Cancer Institute (NCI) and hospitals accredited by the American College of Surgeons (ACS).  The NCI has designated 69 cancer centers in 35 states as NCI-Designated Cancer Centers in recognition of their leadership and resources in the development of more effective approaches to prevention, diagnosis, and treatment of cancer, and many but not all of these centers are affiliated with Academic Medical Centers.  The ACS Commission on Cancer accredits cancer programs within hospitals that meet ACS quality and service standards, and this accreditation is designed to be an indicator of higher quality cancer care.  NCI-Designated Cancer Centers were identified through the list of centers on the NCI website, and ACS-accredited cancer centers were identified based upon data from the AHA 2014 survey of hospitals.  Fifteen of the 20 counties in the study had at least one NCI Cancer Center within the borders of the county, including Cook, Harris, and Los Angeles counties that had more than one NCI Cancer Center, and all but one of the counties (Pima) had at least one hospital with an ACS-accredited cancer program.

The largest limitation of this analysis stems from the fact that Medicare Advantage plan networks vary widely in the size of the geographic region that they cover.  While the networks of some plans are limited to a single county, other plans available in that county offer beneficiaries access to hospitals in neighboring counties and even in bordering states.  In order to compare the breadth of coverage for plans within a particular area, we chose to analyze each plan’s network within the county because this is the largest geographic measure that all plans are required to cover.  The county analysis therefore provides the most complete set of data available for this type of analysis.  For most of the selected counties, this geographic restriction also provides a reasonable snapshot of the health care market accessible to seniors in that region.

However, in some major metropolitan areas where residents frequently cross county lines, this method of analysis is flawed.  For example, the proximity and accessibility of Queens County to New York, Kings, and Bronx counties, and the distribution of major medical centers in these neighboring areas, means that many Queens residents go to hospitals outside of their county.  In this case, counting the number of hospitals that a plan network covers within Queens County is not necessarily a good measure of a network’s coverage.

Although counties were chosen as the geographical lens for this study, there are other established regional divisions that could be used to evaluate the size of provider networks.  The extent to which these regions overlap with counties gives a sense of how significantly the results may differ depending upon the way the country is divided into coverage areas.  The Dartmouth Atlas of Health Care created Hospital Referral Regions (HRR) as representations of regional health care markets that include a major referral center.3  The overlap of these HRRs with counties is highly variable, although it depends somewhat on whether a county is primarily rural or urban.  In the more rural counties, the entire county accounts for only one small portion of an HRR (all of Fulton County in Georgia accounts for only 15% of HRR 144).  For big counties with a larger urban population, one county may contain several HRRs (Cook County in Illinois spans eight different HRRs, including all of HRR 156).   In only one case is there almost exact overlap between the county and a single HRR (Clark County in Nevada with HRR 279).

Another potential way to analyze network coverage is Metropolitan Statistical Areas (MSAs), established by the Office of Management and Budget based on core urban areas and their surrounding economically integrated regions.4  Every MSA includes at least one entire county.  For 4 of the counties (Clark, Pima, Salt Lake, and New Haven), the county accounts for 95-100% of its MSA.  Two counties represent less than 20 percent of the MSA (17% for Fulton and 11% for Queens) and the remaining counties represent between 33 percent (Multnomah) and 81 percent (Erie) of the MSA in which they are located.  This could indicate that by restricting our analysis to the county in these areas, we may have excluded some portion of a county resident’s health care market. 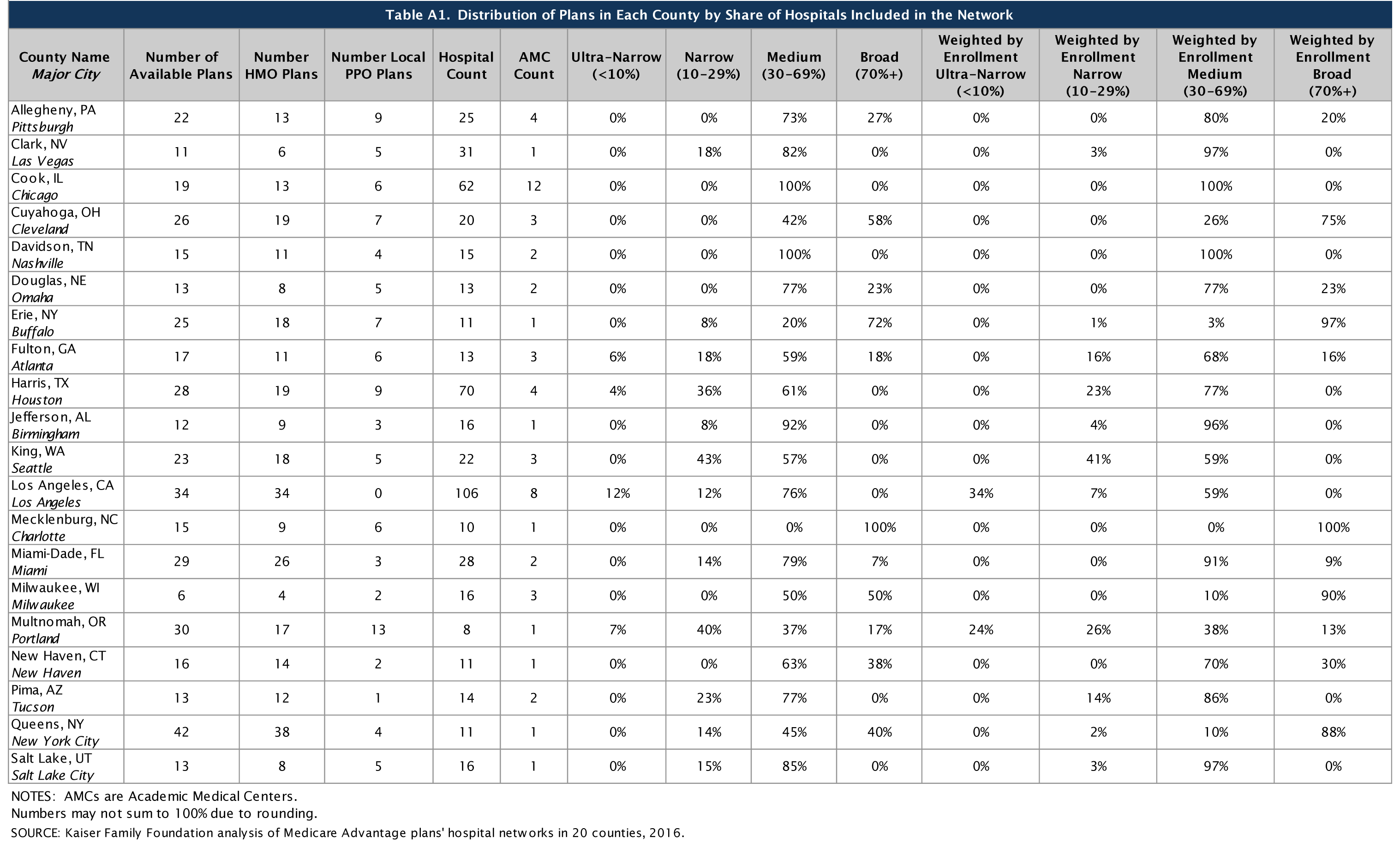