Medicaid Financial Eligibility for Seniors and People with Disabilities: Findings from a 50-State Survey

Medicaid is an essential source of coverage for medical and long-term services and supports (LTSS) for many seniors and nonelderly adults and children with disabilities. Aside from the core group of SSI beneficiaries, pathways to full Medicaid eligibility based on old age or disability are provided at state option. This issue brief presents the latest state-level data on Medicaid financial eligibility criteria and adoption of key age and disability-related pathways (Figure 1). It also analyzes state choices about whether to adopt these optional age and disability-related pathways in light of states’ Affordable Care Act (ACA) expansion status. Findings are based on a survey of the 50 states and the District of Columbia. Appendix Tables contained detailed state-level data. Key findings include the following: 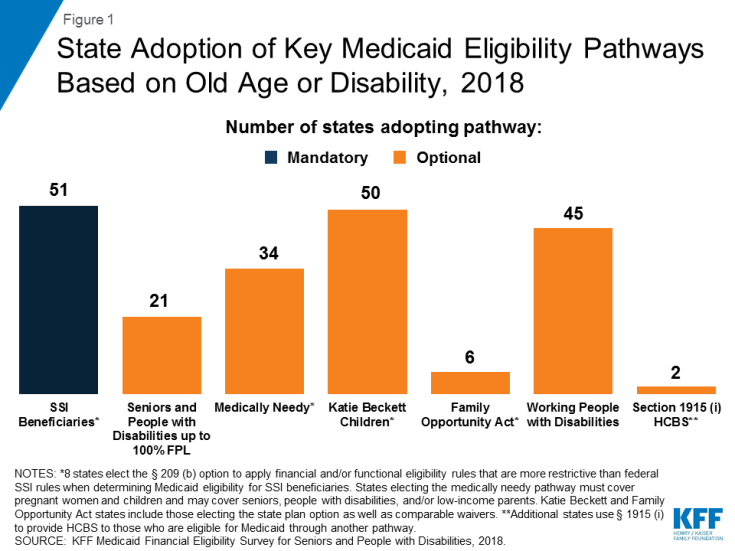 Looking ahead, state and federal policy choices that affect Medicaid eligibility for seniors and people with disabilities will remain important areas to watch. As more states have adopted the ACA Medicaid expansion, state choices about optional age and disability-related pathways generally have remained stable. Expanding coverage for children with significant disabilities is the subject of recent legislation in Louisiana and Tennessee. States’ progress in advancing community integration could be at risk if spousal impoverishment rules are scaled back for HCBS but remain in place for institutional care if Congress allows ACA Section 2404 to expire this fall. In addition, Medicaid eligibility in age and disability-related pathways could be affected by a change to the inflation measure that is used to determine the annual federal poverty line, which the federal government is considering. Using a lower inflation measure would result in smaller increases in the poverty line each year compared to the current measure, which would slow the annual increase in Medicaid income limits based on the FPL over time, with fewer people eligible for Medicaid as a result. These and other policy changes in the years ahead will influence the extent to which seniors and people with disabilities can gain and maintain Medicaid eligibility and access to needed preventive, physical, behavioral health, and long-term services and supports.